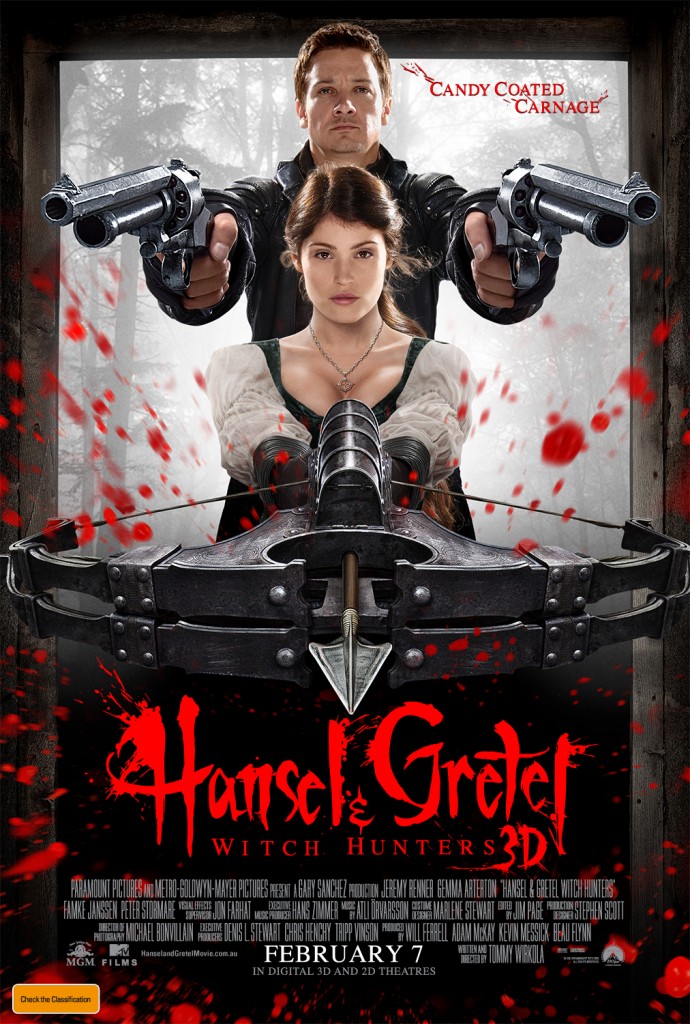 Hansel and Gretel Witch Hunters is a film based on the Brothers Grimm  fairytale called Hansel and Gretel. Whilst the film adaptation follows a slightly deviated version of the story, those of us familiar with the tale might be able to pick out some similarities, at least at the beginning of the film. While I quite enjoyed this version of the tale, I can’t help but wonder if it is accurate. Fans of the Grimm tales may find this adaptation a little different to the stories that they are used to.

Is the film an accurate representation of the source material, or is it another generic action flick? Find out my thoughts in the review below.

Hansel and Gretel Witch Hunters follows the story of the two characters, Hansel and Gretel who are both brother and sister. If anyone is aware of the fairytale, these are the siblings that get abandoned in the woods and almost get eaten by a witch in a house of candy… I think. They are then later found by their father and live happily ever after in a house of candy or something. 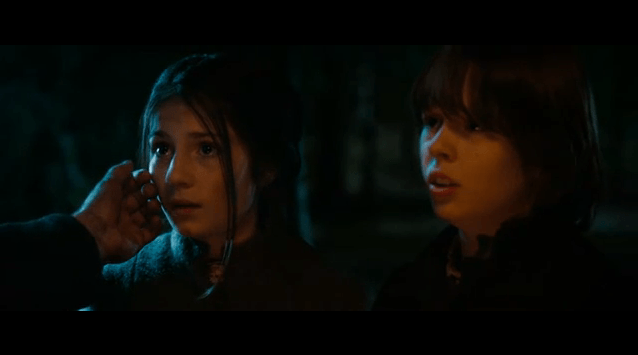 Much like the original tale, the two kids murder their witch captor, but instead of finding their father, they escape to a nearby town. This event earns them notoriety amongst the townsfolk as Witch Hunters and they then spend the rest of their life killing off Witches. And this is pretty much where the story of the film kicks in, just after they’ve gained a massive following as mercenary Witch Hunters.

The main storyline of the film follows the two as they take a new job during their stay at a new town. On the outset, the job seems to be completely normal, come in, hunt witches, save children and get paid. However, this is far from the case as you quickly learn.

What I really liked about the movie was the way the storyline progressed. I mean sure, it was just your typical action flick featuring Witches instead of terrorists, but man the way the story progressed made it interesting as much as the visuals made it fun. Which is a lot. 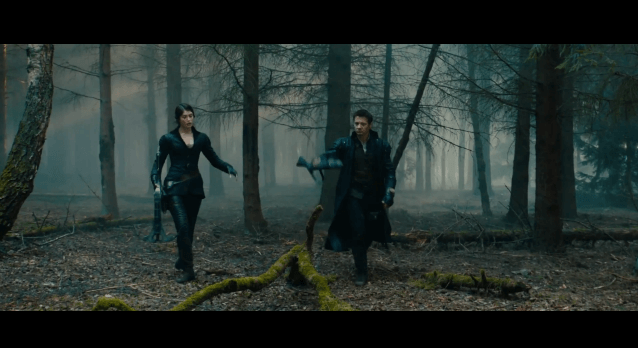 I have to say that there are things in the story that seem predictable when you think back on them, but as you’re watching it’s really like: “Wow, that happened? They linked all that together? Oooooo…”. Again, it is predictable, but it’s told in a way that’s both fresh and awesome.

I quite enjoyed the storyline in Hansel and Gretel Witch Hunters, sure it was a little generic and predictable at times, but in its unique setting, it worked really well. Definitely see this film if you love when genres are turned on their heads.

Visually this film takes a lot of its cues from action films, rather than fantasy ones. If I was pressed to give a quick description of this film visually, I’d describe it as: “Running and Gunning with Witches”. Sure that sounds painfully generic and plain, but really, with the setting and what you can do with Witches and the like, it makes for some really interesting cinema. 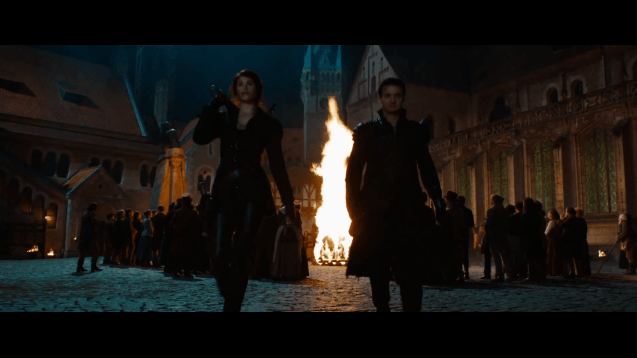 I also loved the costumes in the film. While the movie feels a lot like a Grimm tale, it looks a lot more… I wouldn’t say fantastical, but definitely more badass. While being that little bit more awesome, they still managed to fit the films setting quite superbly. Definitely in love with the aesthetics here.

The opening sequence was simply amazing. I loved the way it it showed the siblings progression from kids into worthy Witch Hunters throughout an awesome animated display that puts most animations to shame. This is probably one the best opening sequences that I have seen in a movie in a long time. Whoever was responsible for that deserves some kind of award. In fact, I would totally watch an animated series based off this franchise if it was done in the same style as the opening. As an aside, I’d also watch a TV series based off this using standard film-making techniques.

I also quite enjoyed the look and feel of all the architecture in the film. It really helped the film come across as being set in a certain time in history. This really added to the authenticity of the film, which is something that helped me be drawn in to it’s story so much more. 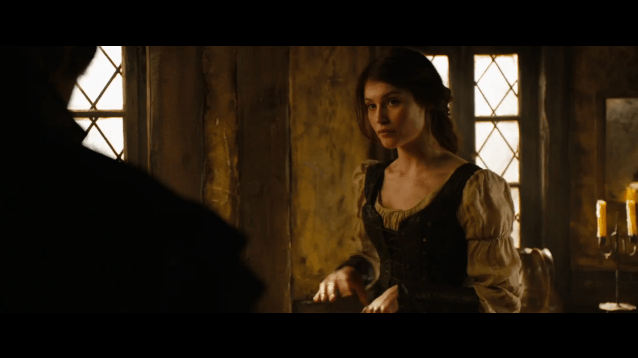 The one thing that I think is going to urk a lot of people with this film is that all the main characters of the film speak in that raspy American accent that is prevalent in American films. However, often you’ll hear this contrast against the German sounding background cast, which creates a kind of distance between the characters. It’s like “Hey, pay attention to these guys, they’re the main cast. Ignore the background”. When really, all of the characters should segue in together to create a fully realised world.

However, this film has some amazing audio work in all of the action scenes and it really helps you become sucked into the atmosphere of the combat. I quite enjoyed this aspect of the film and this makes me happy. 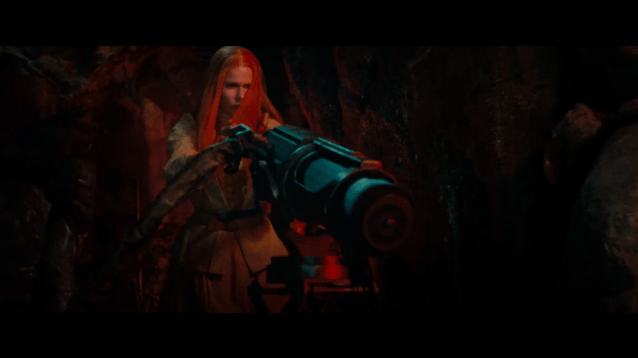 What was really great was the way the characters interacted with each other, particularly Hansel and Gretel themselves. I’m not sure if I’ve just been watching too much Anime as of late, but I was kind of expecting there to be some odd undertones between the two characters, I’m thinking along the lines of From up on Poppy Hill here. However, the dialogue managed to keep any of this stuff out. While the two were still unbelievably close, it still didn’t border on the odd within the audio.

Hansel and Gretel Witch Hunters is an incredibly fun film that should keep you entertained on all fronts. Whilst it isn’t entirely mentally challenging, its great story mixed with amazing visuals and some really nice audio makes this film an exceptional experience. Hansel and Gretel Witch Hunters is a fun film that I would heartily recommend to any living human being.