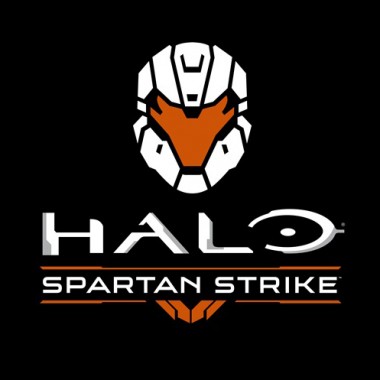 Following on from the successful Halo: Spartan Assault on PC and Windows Phone, Microsoft has done the imaginable and bought Halo to the iPad with the new top-down shooter; Halo: Spartan Strike. This top-down, twin stick entry into the Halo franchise is the most fun I have had with the series in quite a while and is one of the few iOS games that I will come back to over time. 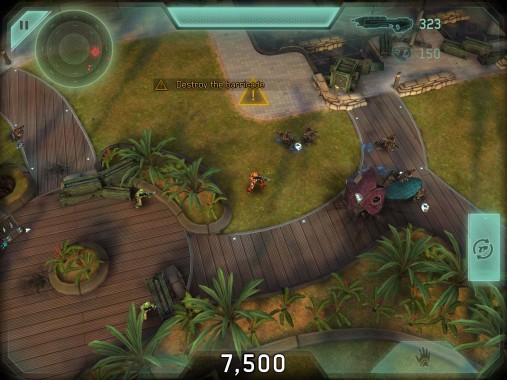 The game begins during the events of Halo 2 and gives players a chance to get used to the controls and setting before skipping ahead a few years to after the events of Spartan Assault (but before Halo 4). We get to visit a lot of previously known locations that fans will immediately recognise, like New Mombasa, and a few newcomers like the Installation 03 Altar.

Unlike most spin-offs, Spartan Strike doesn’t do a whole lot of world building, instead mostly opting to tell a new story in the preexisting confines. That isn’t to say that there is nothing new to be learned about the Halo universe from this game, just that there isn’t all that much. 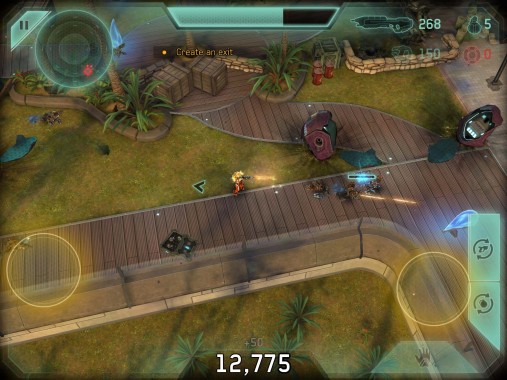 Spartan Strike is a top down, twin-stick shooter set in the Halo universe. Its funny how with that one sentence, I feel like I have almost explained the entirety of the game. Players take on the role of a SPARTAN as you progress through the beautifully rendered stages and gun down Covenant and Promethean enemies. As with most twin-stick shooters, the controls are surprisingly simple, yet the touch gestures allow you to do so much with them. throwing a grenade is as simple as double tapping on the screen, while a melee attack is as simple as a quick swipe. 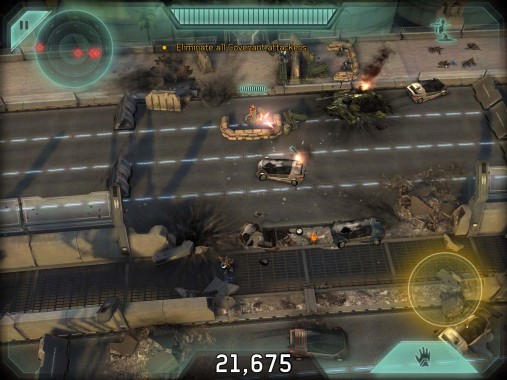 Usually when it comes to digital buttons and joysticks I am a little hesitant, but I have always found that twin stick shooters feel right at home on the iPad, and this is no exception. The controls felt incredibly natural and responded to my gestures exactly how I wanted them too. While there can be a lot going on

The best part about Halo: Spartan Strike? No microtransactions! It is rare that a mobile game will do this but it is exciting none the less. While there are purchasable upgrades and weapons, these are all done with the in-game currancy, meaning that after your intial $6 outlay, that’s it – you have the entire game’s content. 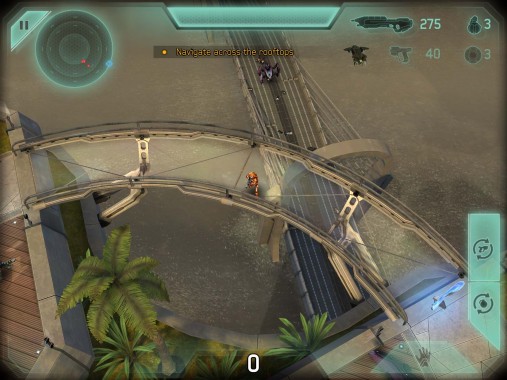 Having recently updated to the latest hardware has given me a whole new respect for mobile games, and a lot of the reasons for that are beautifully executed by Spartan Strike. The game makes the most of its hardware and ends up being an absolutely beautiful experience that just looks like a true to life Halo game.

As is typical with top-down shooters, the screen is panned quite far away from the action, allowing the player to see around them in 360 degrees. This means that the player character, NPCs and enemies are quite small, even on the iPad’s screen, however the level of detail is absolutely staggering. While this is no Master Chief Collection, everything looks really good here, with everything from individual armor plates to tiles on the sidewalk being rendered.

This is one of those games where screenshots don’t do it justice. When the game is frozen in place you can see the imperfections and few jagged lines, but in action the game runs and looks as smooth as silk. 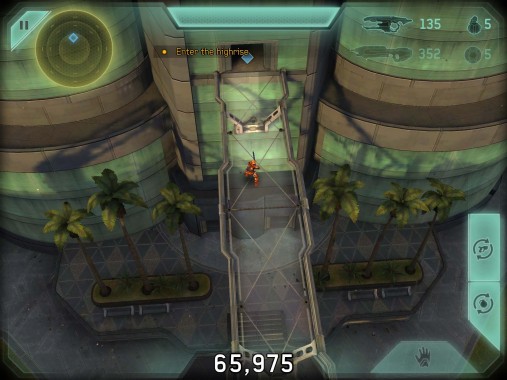 iOS games have come a long way since the iPhone first released its App Store. What was once a wasteland of sudoku and match-three puzzlers has evolved to be one of the best places for quick bursts of gaming, and Halo: Spartan Strike is a testament to that. With simple controls that let you jump right into the action, a story that fills in some gaps in the Halo lore and visuals that are really above and beyond what they needed to be, Halo: Spartan Strike is a worthy addition to the Halo franchise and mobile gaming.