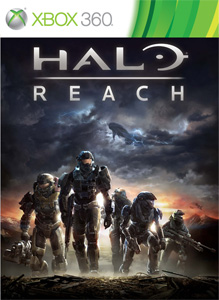 Story
“Halo: Reach, developed exclusively for Xbox 360 by acclaimed developer Bungie, is the blockbuster prequel to the best-selling Xbox franchise of all time. It represents the culmination of Bungie’s 10 years of experience crafting groundbreaking Halo games that have raised expectations for what can be achieved in a video game.

Experience the fateful moments that forged the Halo legend. This is the story of Noble Team, a squad of heroic Spartan soldiers, and their final stand on planet Reach, humanity’s last line of defense between the terrifying Covenant and Earth. This darker story is echoed by grittier visuals amid a backdrop of massive, awe-inspiring environments. Characters, enemies, and environments are rendered in amazing detail by an all-new engine designed to deliver epic-scale encounters against the cunning and ruthless Covenant.

Once the campaign is over, the battle continues online with an unparalleled multiplayer experience expanding on the award-winning suite of features that helped define the Xbox LIVE experience.” [Via Xbox.com]

Anyone who has read the books, played any Halo game, or even watched the trailers know how this game ends; and many of you even knows how it plays out based off the books. The story puts you into the shoes of Noble 6 as you team up with various members from Noble team and attempt to stop the enemy force that is attacking Reach.

Gameplay SinglePlayer/Campaign
The campaign is comprised of 9 playable levels. Each level has you teamed up with a different Noble Team member. Everything that is familiar from the first three games is back. A deep story filled with regular battles. The formula seems to be tried and true and is still working pretty well, but this time around Bungie decided to add some more for a larger variety of gameplay.

This time around, there is a space level as well as a flying level. The space level has you piloting a space craft as you battle the enemy out in space and attempt to stop the destruction of reach by destroying one of the main ships. The flying level has you flying around a massive level, as you help certain people at certain destinations, and stop at certain buildings to destroy enemy technology. Both levels are a breath of fresh air placed into the campaign.

The rest of the game consists of long levels scattered with battles every so often. The battles in Halo: Reach are massive; however, with you going against small armies. Since you aren’t as strong as Master Chief, the game focuses more on a cover and shoot approach. On the other hand you aren’t as weak as an ODST either, so you can still do damage without worrying about dying on the lower difficulties. Bungie also decided to spice things up by increasing the difficulty even more based on how many players are playing. This may seem like a good idea at first, and for the hardened among you, you might even enjoy it. My friends and I played four player co-op on legendary, and at first we liked the hard battles; however, when a level takes over an hour to complete because of the ramped up difficulty and a massive amount of deaths it all becomes quite boring.

Gameplay MultiPlayer
Multiplayer is where this game shines. You can pretty much do anything in the game with a bunch of friends or just some random people. Although the campaign is currently restricted to being playing only with friends, Bungie will also release this with a matchmaking lobby in the near future. Everything else is available in a matchmaking lobby, and lets you play every aspect of the game with a group of people.

Firefight lets you team up with people and kill waves of enemies. Firefight first showed up in Halo 3: ODST, but is now back and better than ever. The matchmaking lets you play one round with anyone you want with infinite lives. Matchmaking firefight is best if you just want to play a round of firefight without having to set it up; everything is there without the hassle of getting friends and making the setting. On the other hand, if you want the perfect firefight experience, you can now tweak every aspect of the game to do whatever you want; set loadouts, enemies, skulls, anything. These games count as custom matches and can only be played with friends, but these firefight matches also lead to tons of fun (May I suggest infinite rockets, against waves of hunters?)

Multiplayer is back in Halo: Reach and like everything else, it is much better. Although the base frame is still there, the physics have been updated and the rules of engagement have changed. While in Halo 3 most battles ended with punching, Halo: Reach fixes that problem and focuses more heavily on gun fights. Punching is still in the game, but it requires new strategy including the ability to assassinate an enemy from behind which triggers a sweet killing animation as well as an instant kill (much better then teabagging for a “HAHAHA! I got you” insult, in my opinion). New guns and armor abilities have also been added that change up gameplay slightly.

Everything you do in Halo: Reach now earns you credits. These credits are used to rank up, as well as buying new stuff. As you earn credits your rank will increase along side of it, but you can spend the credits whenever you want and still continue increasing your rank without the need to save them. Credits can be used to buy unique armor variants to wear in every aspect of the game. You can even see your custom spartan during the campaign and even cutscenes. It is up to you to determine how cool your character looks as you play. The armor variants are only aesthetic and add no extra armor to defend yourself with, but this keeps the playing field fair no matter how highly ranked your opponents are. 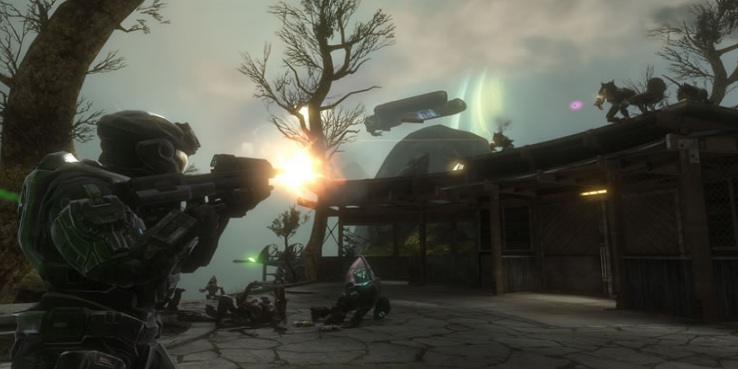 Audio & Graphics
Both the audio and graphics are most notable in campaign. During the campaign is when you actually hear the music or get to watch cutscenes. While the same graphics are present in multiplayer, it is just not the same. As for the audio, you just can’t appreciate it the same in multiplayer because there aren’t any action soundtracks present; just lots of gunfire and the pitiful scream as you kill your opponent.

The audio is awesome. Booming soundtracks pave the way as you traverse the lands of Reach. Every battle is met with an equally epic soundtrack that easily preps you for the fight ahead. Explosions and bullets are each accompanied by an equal sound that makes you feel like you are in danger. I could keep going on and on about the sounds and the soundtrack, but I think everyone gets the hint.

The audio is also quite nice, and extremely pleasant to look at. With a new AI system in place, Bungie has been able to place a massive amount of enemies on the field. By yourself in campaign this is epic, and creates the feeling that you are right in the middle of a massive war; however, in online co-op it creates framerate lagg that takes away from the experience. Even during cutscenes there was a bit of stuttering, and overall it simply took away from the experience. Luckily, the game easily makes up for it in the long run.

There is also 5 avatar awards present in the game, some of these may take quite some time to get but overall they are quite easy to achieve.

Overview
Halo: Reach is truly Bungie’s swan song. We will miss Bungie as they leave for newer games, luckily we have Halo: Reach to remind us of all the good years we have enjoyed playing Bungie’s Halo games and the many years we will enjoy in the future still playing Halo: Reach. Like the Halo games before it, Halo: Reach will be played for many years to come. While the Campaign is more of a onetime only thing, Multiplayer will be largely populated for a very long time. A lot of people were still playing Halo 2 when those servers were shut down, that is quite a feat. Halo: Reach’s Multiplayer will be strong for many years to come, and is definitely worth a buy for anyone who loves playing online. With all the unlockables, levels to gain, challenges to do, and friends to meet; there will be plenty to do for many years to come.
I give Halo: Reach