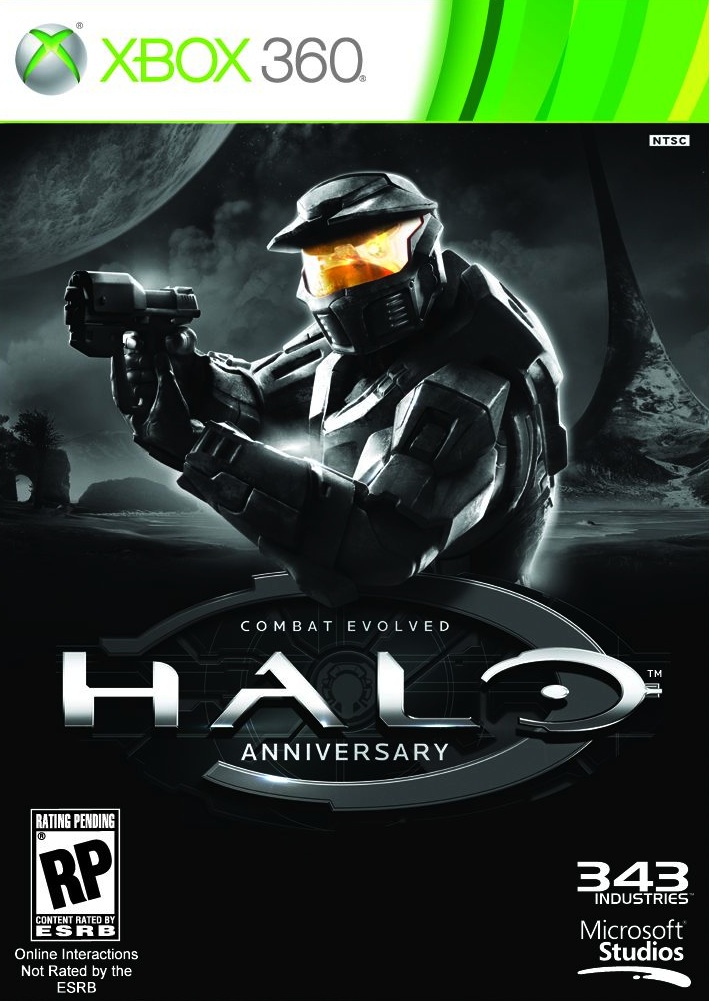 Overview:
It’s been just a little over ten years since Halo: Combat Evolved hit the original Xbox and began the domination of the first person shooter genre on home consoles. High Definition remakes are all the rage these days and 343 Industries, caretakers of the Halo franchise for Halo 4-6, were put in charge of remastering the original Bungie classic. With an updated graphical engine and reproduction of some of the Halo franchise’s best multiplayer maps, does Halo Anniversary deliver the goods in a holiday season crowded with great quality first-person competition, or is this just another cheap, HD cash-in?

Gameplay – Singleplayer:
In case any of you have been living under a rock for the past ten years, Halo puts you in the shoes of a supersoldier, known as a Spartan, called “Masterchief”. Upon investigating a massive, artificial ring-shaped world known as “Halo”, the human warship Masterchief is travelling on is attacked by a group of angry purple aliens known as the Covenant.

And so, after an extended tutorial sequence, you’re handed a gun and told to blast away at the ship’s attackers. This is where the fun truly begins. What made Bungie’s original game so memorable were the tight controls and responsive feedback given by the weapons, and this is carried over perfectly to the remastered engine powering Halo Anniversary. Enemies stagger when hit, the aim-assist is friendly enough to make you feel like an unbeatable marksman without holding your hand the whole time, and every weapon has a distinct and unique feel to it. Whether it’s the combat rifle or the needler, every weapon plays and feels differently, and it’s a joy to rediscover them for the first time while playing the game. 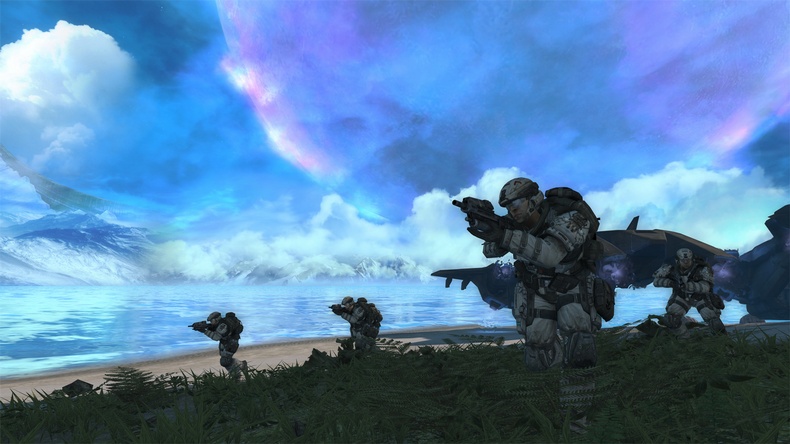 Despite Masterchief’s badassery, there’s only one of him, and a few moments later you crash land on Halo and have to attempt to regroup with the other human forces. And this is where the gameplay begins to falter, giving you a hint of the issues to come, this intial “search and rescue” mission has relatively zero bearing on the overall plot, yet it takes about an hour of your time. At this point it still feels alright, there’s still something new to see around every corner. But as the game progresses, you’ll see more and more of the same enemy arrangements, the same attack patterns, and, most ridiculously, two entire chapters of the game are based in the same location. Now this location re-used room layouts and environments to the tee the first time you played through it. What changes the second time you run through, you ask?

You run through it backwards.

I literally got bored, turned Halo off, and went and played some Fallout instead. And if anyone’s guilty of repeating assets and environments, it’s Fallout.

Thankfully, the game does alleviate this with some great plot twists which have a direct impact on the urgency of the gameplay and the enemies which you fight. At this stage it’s been ten years so I feel comfortable that in telling you Halo is a galaxy purging super-weapon and that a parasitic race called the “Flood” lay dormant on Halo and upon being uncovered started doing their very best to take over the galaxy, I’m not spoiling anything.

And the Flood add something new t0 the gameplay, as you’re no longer shooting purple aliens, you’re shooting zombies, swarms of bug-like parasites, and exploding green enemies. Once again, you’re having fun just blasting away as you discover more about Halo and how to stop the spread of the Flood. 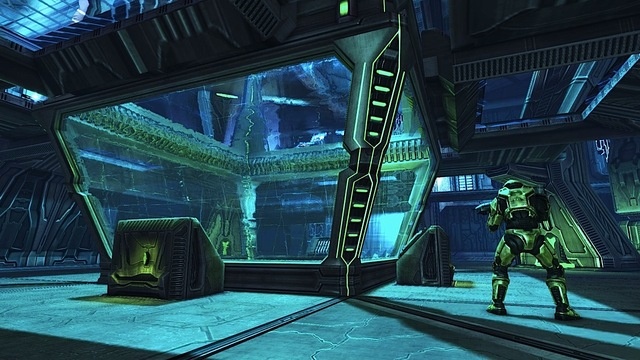 And then it’s like the developers of the original Halo got bored and decided that instead of coming up with new challenges for the player, they’d just give the existing enemies in existing environments a plethora of one-shot, one-kill weapons to decimate you. By the end enemies are hurling sticky grenades and various rocket types your way, and if you put one foot wrong, the hit-or-miss checkpointing system can set you back as far as ten minutes.

In the game’s first few levels you’ll also be confused by the general lack of direction you’re given, and I sometimes found myself wandering rooms for extended periods of time searching for the exit. This however is alleviated by the above-mentioned repeating environments. In one room type, the door is always behind the glass wall on the left, in another, it’s always above and on the right. So the game replaces one flaw, with a distinclty less forgivable one.

In short, the game is too long. A game that requires 20 to 30 hours of time only remains fun when those hours are filled with interesting gameplay concepts, new enemies, or new challenges. Halo collapses under its own weight, as repeating environments and repetitive enemy encounters slowly begin to drag at your patience as you progress through a playthrough. The game becomes nothing short of a chore by the time you’ve reached the final level.

However, the way the story is presented never ceases to remind you why Bungie had a classic on its hands with the original. Even when the gameplay has let you down, the plot drives you forward. You’ll struggle through the chore that the gameplay eventually becomes because you want to uncover the secrets of the Halo weapon and you’ll want to blow it out of the sky once you realize it’s being turned on all sentient life in the galaxy. Whether it’s through the third person cutscenes or Cortana, your Artifical Intelligence “girlfriend”, feeding you information through Masterchief’s helmet, the game never ceases to intrigue and it felt like I was rediscovering Halo, as if I’d never played as or known of Masterchief and the three games that propelled him to superhero status. 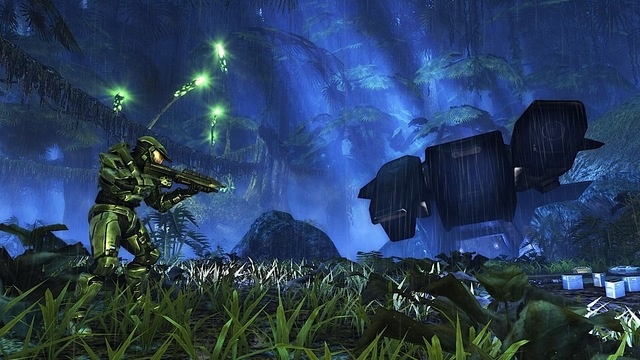 All in all, there’s not much 343 Industries could have done to improve Halo’s gameplay without altering the classic experience, and it was ballsy to stick to the original foundation laid down by Bungie ten years ago. With the new graphics turned on, some of the levels do make it a little clearer where to go, as unlocked doors have a green light in the centre, and environmental cues are made a little more obvious than they were in the original. The addition of story-explaining terminals was an interesting one, and the terminals are rare enough that they feel special, but not so difficult to find that they feel undiscoverable. Though, in truth, many of the story beats provided in the terminals will only make sense to the most die-hard of Halo fans, and the constant referencing of characters who may or may not be involved in Halo 4 only adds to the confusion. But, for the most part, the terminals provide greater insight into the events and characters involved in the original Halo, and are generally a solid, yet subtle, addition to the original game.

The campaign is also playable all the way through with another player, though the lack of ability to choose different checkpoints from specific chapters is a little odd, especially because the chapters themselves are divided into smaller, titled parts when you play through them. So if you want to play the tank level with a friend, you can’t just pick the game up and boot it at the tank section, you have to play from the beginning of the chapter. This is particularly perplexing as other recent Halo games have included the feature, and it makes little sense not to include it in this one.