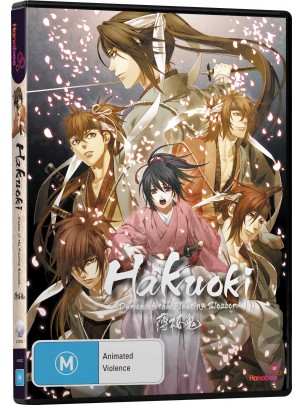 Hakuoki ~Demon of the Fleeting Blossom~ is the adaptation of the reverse harem visual novel by idea factory of the same name. This series covers 12 episodes, which is likely to be only 50% overall story in the Hakuoki saga. I have to admit that I haven’t played the VN, so I can’t back up this assertion. However, I can use the fact that there is a second season being released as evidence to say that the Anime series only really follows at least half of the overall story that will be presented in the Anime format. But a quick look at Wikipedia tells me that I’m wrong and it is actually closer to 25%.

As an aside, I have watched a lot of Anime for girls lately and I feel as though it is altering some key aspects of my personality. How does Hakuoki fair as a package? Read on to find out.

Hakuoki ~Demon of the Fleeting Blossom~ follows the story of a girl named Chizuru Yukimora that is looking for her father because he left home one day and stopped corresponding with her by mail. Her quest took her to Kyoto where, in a rather brutal encounter, she meets the  Shinsengumi. The Shinsengumi are a group of Samurai types that appear to be some kind police or defence force. 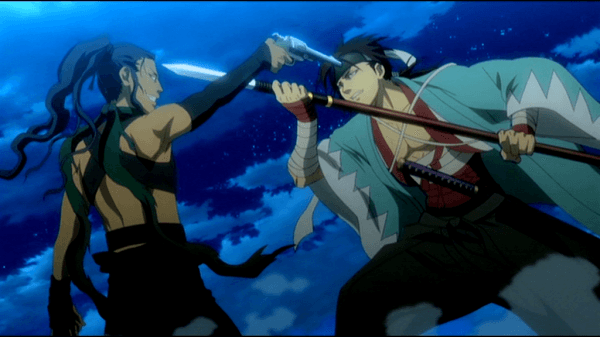 After meeting with the Shinsengumi, Chizuru is captured by them and becomes their captive. However, after a short while of being with them, she is turned into an ally and then later joins the Shinsengumi herself.

One of the things you’ll quickly notice about the Hakuoki Anime is that it seems to be somekind of lite-reverse harem series in that Chizuru is the only female that gets any significant screentime, she is the main character, and that all of the male characters find themselves in intimate situations with her at different times each. While this isn’t necessarily a bad thing, I feel that any person that is attracted to this series because of the action should keep this in mind.

Something that really annoyed me during the story of the series was some of the fight scenes. While these were visually pretty good, they kept on interrupting the fights with a tonne of awkward drama and meaningless dialogue. One of the best examples of this is towards the end of the series where one of the lesser characters is fighting one of the main antagonists and almost after every action was some kind of cheap dramatic moment, usually followed by a massive speech about how Chizuru is awesome.

However, the story itself, that is the story about swordsmen turned into fake demons and the whereabouts of Chizuru’s father and it is that he’s been doing, is actually quite interesting. In particular I like how a lot of those elements were handled in the plot of the Anime series. I also quite enjoyed how the elements expanded and compounded as the story advanced, adding a layer of depth and mystery to the storyline. 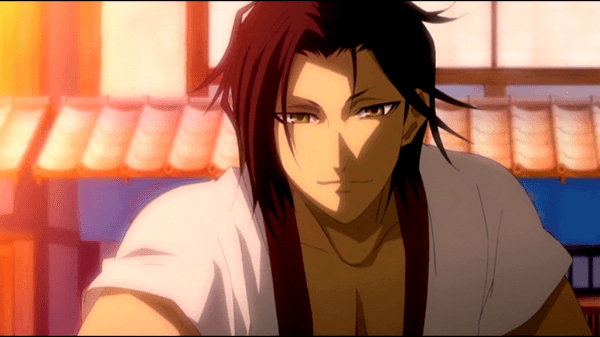 If you can get over some of the cheap drama and the fact that this is a reverse harem, Hakuoki is actually quite the interesting series.

Each male character in Hakuoki has been carefully handcrafted to best attract its core female audience. However, I have to admit that a lot of the character designs are pretty awesome by themselves. However, this only really extends to the male cast members with the exception of the Ninja girl that you meet later on in the series.

The fight/ battle scenes are quite fluid in their presentation. However, as I mentioned previously, they keep getting broken up by (often) cliche and dramatic moments that end up killing any tension the battle would have created. 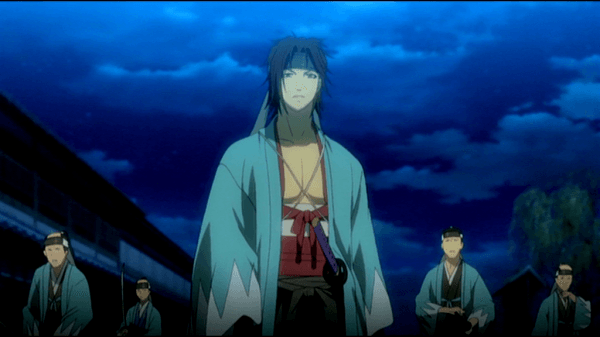 The backgrounds and and other sets have an impressive level of detail to them. This significantly adds to the series’ pretty good visuals. I particularly enjoyed how often the Shinsengumi would appear in different areas and at a couple of points, they would change their base of operations completely.

Hakuoki has a pretty catchy opening theme song, which is not something that I was expecting coming into this series. In fact, I never expect to hear a catchy opening theme when watching Anime even if most series’ have them. What was pretty awesome was how well the theme tune also fit the feel of the series. I feel that this is an important thing for a theme song considering that it appears at the beginning of the show and should be setting the feeling before even entering the episode.

I disagreed with some of the English voice actors at times in this series. The voices just didn’t feel like they fit some characters too well. I mean yeah, some were excellent, but this one guy, I don’t know who it was because I skip credits, sounded like he had this put on Asian accent that kind of ruined the entire experience every time he spoke. It might not be the VA’s fault, it might be his actual accent. But man, did it seem terrible for that particular character. 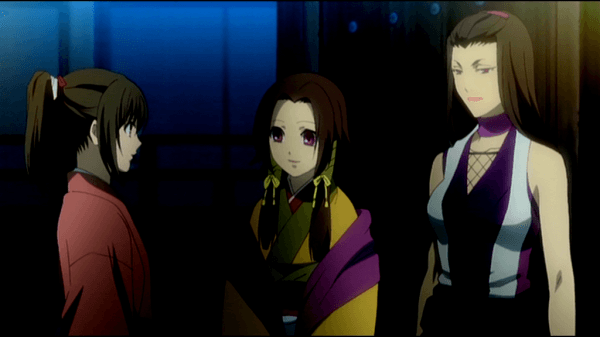 Other things in the audio bugged me as well. For instance there were a few characters that the cast kept on referring to as men yet they sounded like reverse transvestites. When you looked at the character visually, they were usually a mix of male and female traits too, so this added to the confusion further. If this was some kind of running gag, it failed.

Hakuoki has a small selection of extras, such as Special Features and an awesome interior cover art. The Special Features include a textless opening and closing as well as Hanabee trailers. A definite value add to this pretty good series.

Overall Hakuoki ~Demon of the Fleeting Blossom~ is a pretty good series that will entertain most viewers. It is clearly evident that this was designed with a female audience in mind and as such, a female viewer would get more from this particular series than would a male one. Although, even as a male viewer, I can’t really say it’s truly bad or anything. In fact, I enjoyed it and I think others would too.