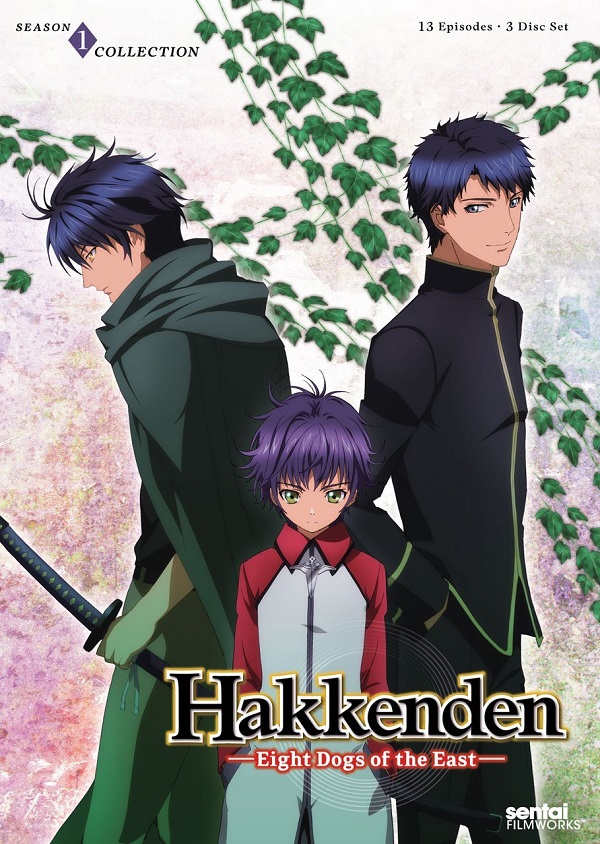 Overview
There is a very good chance that you have probably seen a series that is some form of an adaptation from the epic novel series Nansō Satomi Hakkenden. This month along we saw the release of a series that spun the story of Princess Fuse into a ‘counterfeit’ style movie and now we have Hakkenden: Eight Dogs of the East. Now that the first season of this series has been released in North America, is Eight Dogs of the East’s take on Hakkenden worth watching?

Story
Hakkenden: Eight Dogs of the East begins with a village in flames and children dead or dying upon the snow. Through the flames a strange man appears holding a sword, asking one of the children if they wish to continue living. Five years later the series joins these three children who survived the events of their village being burned to the ground, but not without going through some changes. 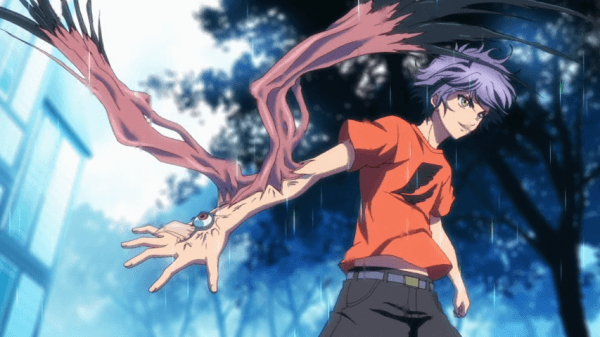 Shino, Sosuke, and Hamaji live in a church on the outskirts of a village that is afraid of what they are capable of as rumors are constantly whispered about the disease that spread throughout their village. However things are much more extreme than that, as it turns out Shino’s body contains the Murasame weapon that manifests itself as a talking crow. This possession forces his body to not age and gives him an affinity for demons while Sosuke also must deal with sharing his body with a dog.

Living in the church, these three lived a relatively comfortable life but the Murasame is a precious weapon and the Imperial Church moves to take action on the group by kidnapping Hamaji. Despite this kidnapping, Hamaji finds herself in a comfortable lifestyle and even when Shino and Sosuke go to her rescue, they find that she is being taken care of and that the man who kidnapped her is actually the same man that saved their lives five years prior. 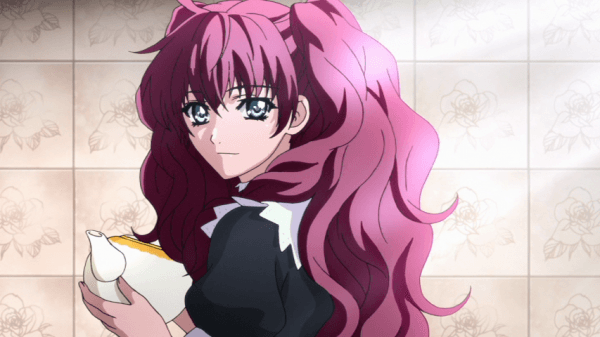 This man, named Satomi, tasks Shino with finding others that are similar to him and his brother. You see, these two were both born with flower shaped birthmarks and holding glowing gems with a word emblazoned on said gem. These gems relate to the story of Princess Fuse and her eight dog warriors who died protecting her. While one might think that tracking down people like this would be difficult, the group runs into two almost immediately, even if they do not know right away that they are in fact gem holders.

In fact, even though the whole aspect of the flower shaped birthmark is used initially to show a relation between Shino and the ones they are trying to find, as well as the fact that they are all possessed by demons in some form, is put to the forefront as Shino deals with various issues that arrive in town or on their journey. In fact the whole gem aspect takes a back seat for quite some time and is only briefly brought up again at the end, likely because the series is intentionally broken into two seasons. 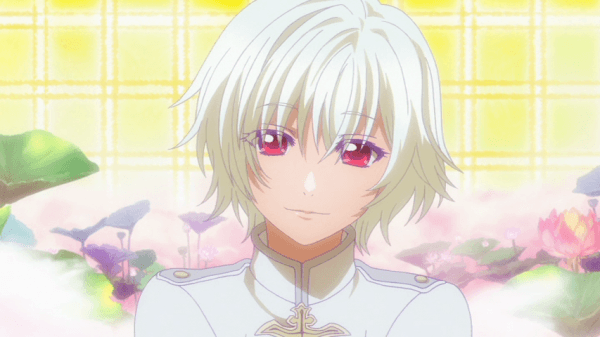 As such, this first season focuses mostly on Shino and Sosuke as they meet people similar to them and handle problems that range from insect-familiar wielding monks holding a friend prisoner, and dealing with a mountain god, with Hamaji barely appearing until she is sent off to school for a one-off episode to seemingly get her out of the way. There are one-off episodes scattered throughout this first season where we are introduced to characters that will likely have some role in the future, but are never seen again after they are introduced which is a very poor way of trying to develop characters we are supposed to care about. 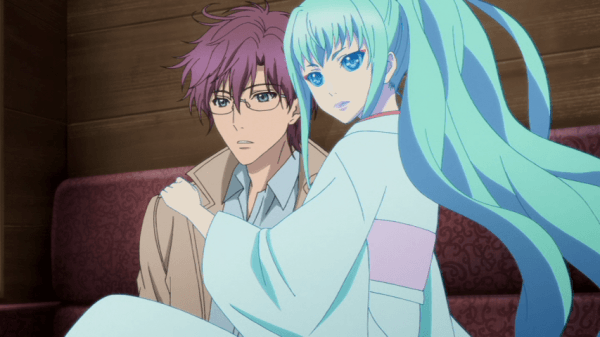 Even the characters that do stick around are barely developed as they tend to either be a running gag or someone to be in the background as Shino and Sosuke deal with things. Only until the final few episodes does the plot actually begin to move forward in any way by revealing a certain villain with an obsession with Shino and someone pulling his strings to try and fulfill a prophecy. This makes this season difficult to continue at times simply because it feels all over the place at times while trying to introduce every character before attempting to find a course for itself at the end.

Visuals
Eight Dogs of the East is a fairly impressive looking anime with some great looking character designs and a few nicely detailed looking yōkai. Each character has a unique look and whenever they transform into their yōkai forms or whenever Shino makes use of Murasame the sequence is handled incredibly well. There are some minor drops in quality throughout the series but for the most part the designs of the characters fit in well with the era that the series seems to take place in. 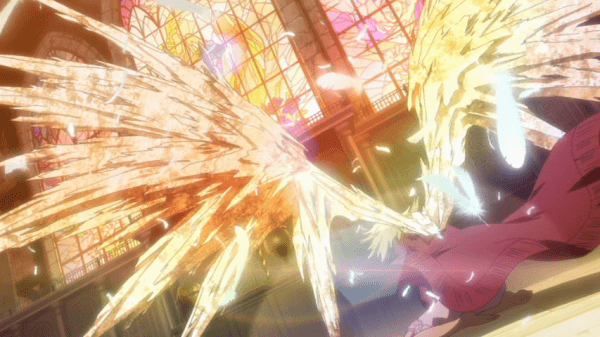 There are a few action sequences throughout but they tend to not last very long as most of the fights are ended within a few strikes which is a bit disappointing. The background scenery is generally what one would expect from a series like this but there are a number of standout moments that take place in the church with the stained glass backdrops making the scene look amazing.

Audio
Sentai Filmworks has given Hakkenden: Eight Dogs of the East an English dub which accompanies the original Japanese voice work and the English cast contains quite a few familiar names that work well given the characters in the series. Greg Ayres does a great job handling Shino and the rest of the cast is suitably fitting. 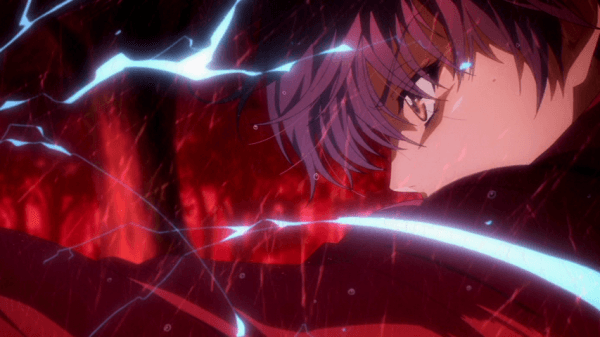 The background music throughout the series ranges from forgettable to simply being there. The only exceptions are for a few insert songs that take place during episodes eight and nine as the vocals do a great job making these moments stand out. The opening theme “God Fate” by Faylan is a mixture of English and Japanese and is rather nice sounding and the ending theme “String of Pain” by Tetsuya Kakihara, the Japanese voice actor for Shino, is a nice closer for the series.

Extras
As far as special features go, Hakkenden: Eight Dogs of the East comes with a bit more than your average Sentai Filmworks offering as it comes with a few episode commentary tracks from the original Japanese cast, a clean version of the opening and ending theme, disc credits, and trailers for other Sentai Filmworks releases.

Overall
Hakkenden: Eight Dogs of the East Collection One is quite obviously a series that was intentionally broken into two seasons, but by trying to force all character introductions into the first season with barely any attempts to develop these characters outside of the main two it becomes a bit of a mess. There are times where the series starts to move forward but these moments are few and far between and the spin on the old Hakkenden story isn’t as enthralling as one might think. Considering all of the haphazard set-up in this first season, hopefully the second season actually manages to bring things together for some kind of payoff.