Hacker Evolution: Untold winds the clock back to 2008, seven years before hacker Brian Spencer saves the world from a rogue AI. The story recounts Brian’s time as the founder of the monolithic Xenti Corporation as after he is framed for a crime he did not commit. Spencer must track down the man who framed him with the help of his old friend Steve. 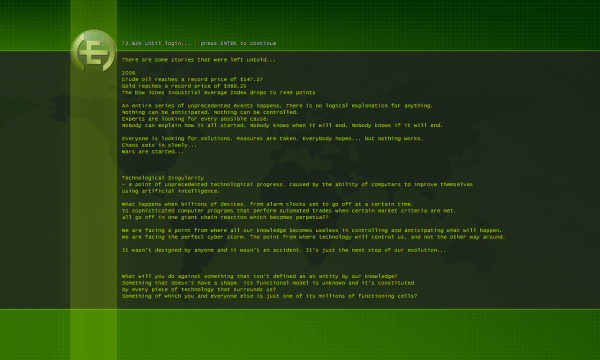 The plot of Hacker Evolution: Untold is told through short introductions at the beginning of each mission. More of the story is fleshed out in game through files found on computers. I found the story to be much weaker compared to the original Hacker Evolution. The beginning started strong, with Brian attempting to clear his name by chasing the man who framed him. Unfortunately, the story really plateaus about three quarters way into the game and quickly falls apart. The ending is possibly one of the most disappointing endings I have experienced in a long time. It was so flat that I actually went back to play the last level to double check if that really was the ending, thinking I may have accidentally missed something.

Although not a true hacking simulator, Hacker Evolution: Untold is a puzzle game presented in a convincing enough way that it would fool those of us whose hacking experience is limited to what we see on TV and film. Players go on a scavenger hunt as they sniff out clues scattered around on different servers, trying to find the next breadcrumb that leads them to a new server that may contain the files needed to complete a level. 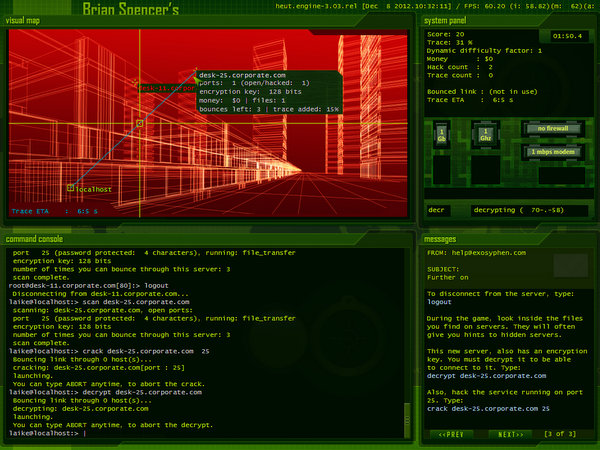 Resource management is an important part of Hacker Evolution: Untold’s gameplay as there is only a limited amount of money for upgrades and killtrace commands and each server can only bounce your connection three times. The global Trace score signifies how close the authorities are to tracking down Brian’s location. If the global Trace score hits 100%, it’s game over. Every aggressive action like stealing money or cracking a server will cause a small rise of up to 15% in the global Trace score. Transferring money, cracking server passwords, and decrypting server encryption will trigger an active trace. Failing to abort or complete the action before the active trace counter reaches zero will hit the player with a devastating 50% penalty. To avoid this, players can either pay for expensive computer upgrades to allow them hack more efficiently or bounce their connections through other servers to buy themselves extra time to hack servers with better defences. Like in the previous game, Brian can spend $500 dollars to lower his global Trace by 10% or use the new deletelogs command. This command allows Brian to regain half of the global Trace penalty he acquired from hacking a specific server. I found this new command helped balanced the default difficulty of the game in comparison to the first game. Players will still need to be careful in Untold as there are still optional servers that provide bonus money or act as red herrings. 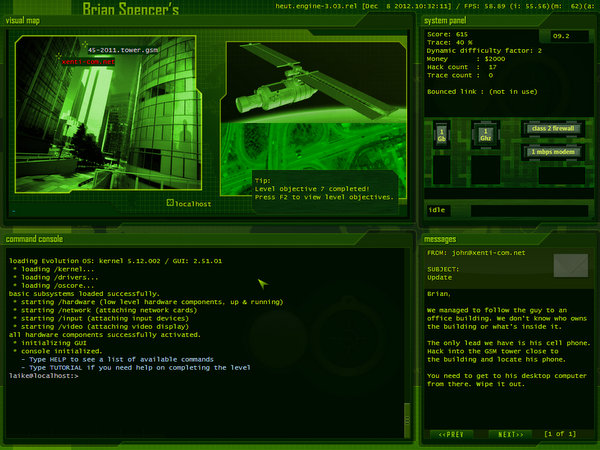 Although the deletelogs command and the slight tweak in difficulty level has made Hacker Evolution: Untold more approachable than the first game, it still suffers from the same problem as its predecessor. A badly timed upgrade or a poorly executed early level can leave a player completely stuck in future levels. Since the game has a single save per profile, the game has to be restarted from the beginning if too many mistakes are made. This problem could be easily solved if each profile created a new save after a level is successfully completed.

The level design is interesting in the game. The base campaign spans around four to six hours. I found the campaign to be highly enjoyable as Untold’s campaign is grounded more heavily in reality compared to the previous game. The levels are more varied, with interesting and complicated multi step jobs. The puzzles are still devious, requiring an eagle eye to pick out subtly hidden servers.

The game’s controls are easy to use. Although 90% of the game is played using the console windows, the game allows the player to type out the first few letters of a command or server name then hit tab to cycle through the possible servers or commands. With this function, slow typists or those incapable of touch typing have a fighting chance. 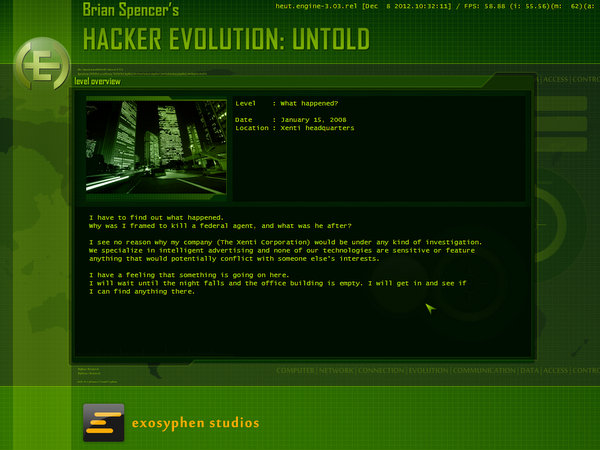 Hacker Evolution: Untold consists of the same computer screen throughout the whole game. A small box on the top right side of the screen provides important like the current computer setup and the global Trace score. Below that box is an area that displays all of Brian’s incoming messages. The majority of the action happens on the large console window on the bottom half of the scree and the map above the console.

Since the missions in Hacker Evolution: Untold are more varied than its predecessor, so is the map. Instead of showing the same word map as previous games, Untold provides pictures that better suit the location of the level. The game still maxes out at 1440×950 resolution, but can be played in windowed mode this time around. This is a blessing for those of us with large LCD monitors.

DJ Velocity returns to provide an eight song soundtrack for Hacker Evolution: Untold. The electronica music is a great fit to the hacker theme of the game. The soundtrack is great for creating a tense atmosphere, but I found the intensity could get a little tiring after playing the game for long periods. The sound effects are full of computer blips and bleeps with a female voice providing announcements for certain major events which suits the theme of the game well. 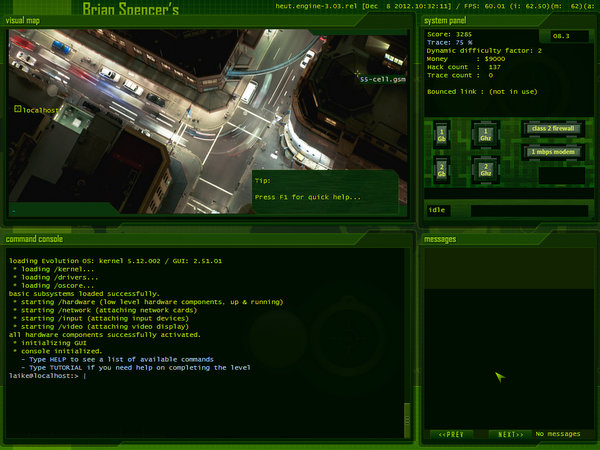 Hacker Evolution: Untold feels more like a standalone expansion pack for Hacker Evolution than a true sequel. Untold goes to great lengths to improve the variety in the game and better balance the game’s starting difficulty. However, it still suffers from some of the same problems from the first game and an extremely weak conclusion to the plot. Even with these flaws, Untold is still an improved evolution of the game.