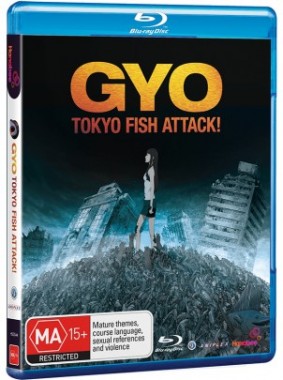 Overview:
Gyo: Tokyo Fish Attack began as a manga by artist Junji Ito back in 2001 which was just called Gyo (“Fish” in Japanese), it doesn’t seem like a long time ago but 12 years IS a long time. They’ve finally brought it out as an anime movie that was released, in Australia, early March. Going into this I didn’t know whether to take it seriously, “A movie about walking, death fish? Weird.” was basically how I went in and I’m glad I did because this movie really shattered that thought. I had never seen something like this before but I have now and…well, you’ll just have to read on. 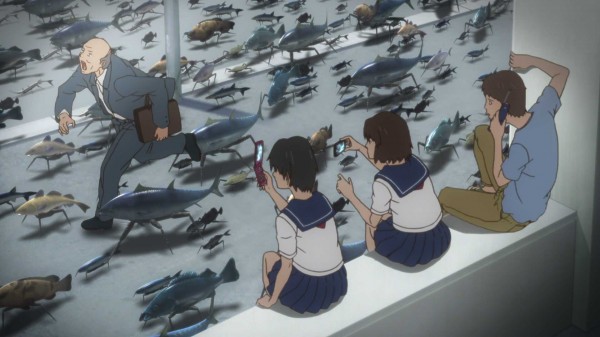 Story:
Gyo: Tokyo Fish Attack is an odd movie to say the least. It’s the apocalypse story you never saw coming. Honestly. At first glance this movie seems extremely weird and you’d probably place somewhere on that list in your mind that says; “Movies NOT to watch” but diving into this movie quickly changes that thought, even just quickly reading over some of the original manga details gets you very intrigued because while there’s this “weird story” there’s also those underlying mysteries that you can’t help but ponder after watching. Basically it is a story of fish with mechanical legs who come up on shore, give off a smell of rotting, human corpses and attack anyone and everyone. That there is the most basic explanation, now if I was to get into it more I would definitely be ruining the story for you, yes, it’s good to go in with a bit of an idea where this movie is going but I feel like watching the story naturally progress, expand and escalate is really what makes this movie brilliant.

Now I feel it’s safe to say the “fish attacking everyone” is more of the setting of the story and not the main focus because we have human leads. Kaori is a girl who is spending a couple weeks at a beach house with her two friends Erika who is an extremely promiscuous girl and Aki their fat, nerdy friend who takes a lot of blows from Erika. Emotionally and physically. They seem to be one of the first to encounter the fishy foes, killing one using a desk in the house, their story escalates from there. Surviving a Shark attack the three are in shambles, Kaori flies back to Tokyo to see her fiancee and the other two beautifully show how backstabbing people can be when their life is on the line. Something I loved about this movie is that without much setup i was made to hate some of these people so much. There wasn’t much setup to these characters, no, but with the little setup that was given you knew who you wanted dead and who you wanted to make it and live, that’s something not a lot of movies can do and it’s something to be admired. On the way to Tokyo Kaori meets Shirakawa a young photojournalist who’s totally onto these fish attacks , so much so that the events that transpire between them are mostly in his favor seeing as he is getting the scoop on all these attacks. They help each other through the most part of the movie and it’s great to see how even when friendships fall apart in danger other relationships can be made. I really liked that. 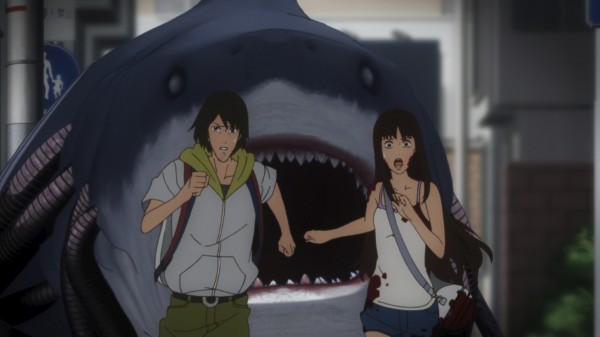 Let’s talk end game. I’m going to try and do this without giving anything away. Most of the movie I sat there with the “Really? Like really?” look on my face, half of what happened took me by surprise and shocked me, some of it was too weird for me at first and it kept getting weirder, the funny thing is that it worked. It got weirder and weirder and it escalated and became something that seemed so different from when the movie started. Starting off I didn’t think I’d enjoy the movie but by it’s end, let me tell you, I was hooked. That’s what made it a great movie.

Visuals:
The visuals in this movie are fantastic! Without a doubt in my mind I can say that there was no problem with how this movie looked. I believe there are two types of anime movie; The anime movies based off of a running anime that they kind of put effort into but probably just as much effort as an climactic episode and the anime movies that are like this. They blended traditional animation and CGI animation in a way that you forget that there’s two different kinds of predominant animation in this film. All the characters are drawn and animated like any other film and the fish, water, some vehicles, etc are animated with CGI. It. Just. Works. This would have to be my favorite aspect of this movie. Something else I like is the mouth movements, during intense moments within the film the animation is synced up with the voices extremely well. Another big kicker in this movie is the beautifully drawn backgrounds and settings like the city, houses and vehicles. The way characters move and react are so…real. They use an old-school manga style of intense facial expressions with the big dark shading lines and the wide-mouthed, wide-eyed look that reminds the viewer “This was a manga. I’m watching anime”. Like I said earlier I can’t fault this movie at all when it comes to Visuals. 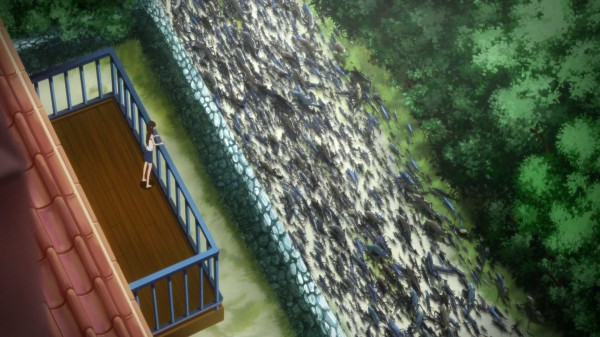 Audio:
My biggest issue with the audio is that I didn’t come away from the movie remembering much of it. It wasn’t memorable. Now I’m talking soundtrack, background music, those aspects. I know there were intense moments were music kicked in and made it more intense but I didn’t come away exactly raving about it when I’ve done that with so much more from within this movie. I just didn’t come away from this movie thinking how good the score was.  What makes up for that is the voice acting. Brilliant. You cared for these characters, you could hear the emotion in their voices, you could here the urgency in their voices, you gave a crap about them!

Extras:
There actually wasn’t any extras. Now I watched it on Blu-Ray and apart from trailers for other anime and an option to read the credits there was nothing on the disc which is a little disappointing considering how well put-together this movie is. I would’ve liked  to see some animation work or something. There IS a reverse side to the front cover which is art of a scene in the movie. 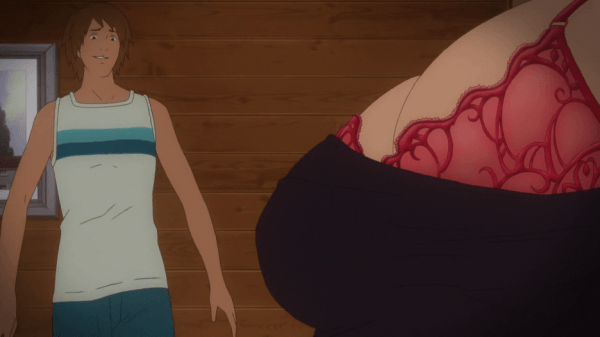 Overall:
This movie is fantastic for people that are; One: Fans of anime in general and Two: Open-minded. There’s no way you could watch this movie with the family, especially not younger siblings! This is a “I’m home alone no one will question why I’m watching this” kind of movie. Personally I would only recommend it to maybe one of my friends, it’s that kind of movie but that doesn’t mean it’s a bad movie at all! If you’re a fan of horror, thriller, psychological types of movies you will enjoy this. If you’re just a fan of great animation and well put-together anime films then, yeah, I would recommend you see this one too. This movie isn’t a long one, only 70 minutes so a little over an hour, and I think that’s great because it doesn’t drag on, it doesn’t bore you and I think viewers will appreciate that. I don’t doubt that fans of the manga will love this, I never read the manga but I researched it after watching this and I believe it does it justice and really shouldn’t be overlooked by fans. It is one of those movies that has a very defined audience but to those who watch the movie it’s fantastic and I think that’s great.