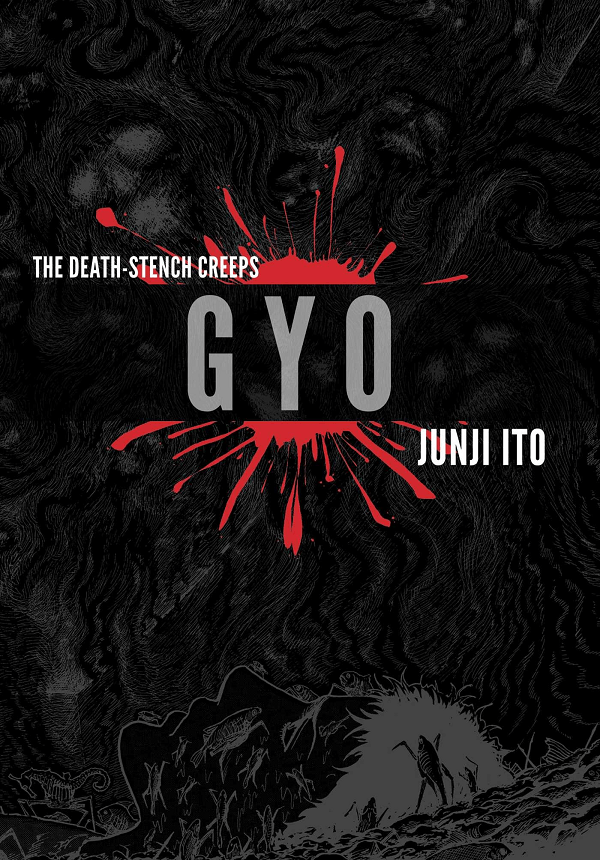 Overview
Creating a horror manga has to be an incredibly difficult task. While some series can manage to get by with a slow paced story filled with haunting imagery and occasional death, others go the completely opposite route. The problem here is, those that go the extreme route have to also avoid becoming ‘campy’ horrors that tend to leave the audience laughing more than they are actually scared by the concept. Junji Ito has created a number of terrifying manga in the past and now that Viz Media is releasing Gyo in a special deluxe package containing the entire series, does Gyo manage to live up to Ito’s reputation?

Story
Takashi and his girlfriend Kaori, who has a neuroses when it comes to smells to the point that she won’t even kiss her boyfriend unless he brushes his teeth every time before the kiss, are vacationing in Okinawa. While scuba diving, an extremely fast object zips past Takashi and later on the pair are attacked by what appears to be a fish with legs. Although Takashi thinks this is a new species, Kaori fears the creature as it is extremely smelly and is described to smell like a rotting corpse.

To both of their horrors, the death-stench radiating fish continues to move despite being sealed in a plastic bag and the pair find that more of these nauseating creatures are making their way onto land. As mutated fish with legs continue to come ashore in all different sizes, Kaori’s obsession with smell continues to drive her nuts while fishing boats come under attack by the creatures and a great white shark storms a beach, eating everyone that thought they were safe.

Once the shark makes its move on the pair and the two barely escape the creature, they fly back to Tokyo but that is only the beginning. Tadashi brings his scientist uncle in on the metal-legged fish and revelations about what is actually making them move and the reason everything smells like a rotting corpse comes to bear. With the fish advancing on land and overrunning Tokyo, Kaori is infected by the gas that is expelled by the creatures, leading Tadashi into an event that sees him placed in a coma for a month. Waking up, Tadashi finds that the world is now a far different place than the one he lived in and that the fish are the least of humanity’s worries in what is easily the grossest and most twisted stories you can read while also chuckling at the absurd stupidity of it all.

From the point that a campy Jaws-like scene plays out, with the swimmers fleeing the ocean to safety on the beach only to be eaten once the shark walks onto land, many of the concepts in Gyo range from being cheesy to highly entertaining. With unkillable creatures starting things out, to conspiracy theories about experiments from World War II gone awry to utilizing humanity’s twisted nature to drive home the horror, Gyo evolves into a satisfying if not still ridiculous story that manages to pull itself together thanks to Junji Ito’s twisted drawings of the creatures and the incredibly well paced escalation of the danger, even though the actual developments feature many plot holes.

Having a great white shark chase two people through a building with tight hallways and corners could be seen as absolutely ridiculous but Ito’s presentation makes it a claustrophobic chase that is truly terrifying to read. Then escalating the danger of the fish and the infectious gas spewing that seems to rot those infected by it to truly horrific and nauseating proportions by making humanity the new source of the death-stench feels like a natural progression of what becomes an apocalyptic event. Piles of bloated humans rotting on large legs that seek out more victims to spread the disease, circus acts twisting the nature of the creatures and exploiting the concept that the expelled gas may be sentient, and even an infected zeppelin that shoot projectiles grace these horrifying pages where barely any character development occurs, as horrific events that come one after another and barely the slightest element of human emotion is present in later scenes.

Artwork
As I mentioned earlier, what holds the entire concept of Gyo together is Junji Ito’s style of artwork and his brand of creating twisted and sickening looking creatures. While things may start simple with the rotting fish and the legs that carry them, things only become stranger later on as gas-spewing corpses with tubes running through their bodies become a common and terrifying looking sight. When he isn’t drawing monstrous looking creatures and bloated bodies, Ito’s fine touches with drawing haunted looking eyes and eyes of those who have completely lost their minds helps drive home just how terrified these characters are of the abominations they are witnessing.

Extra Content
Viz Media has compiled both volumes of Gyo into a deluxe edition package that features an extremely sturdy hardcover with a minimalistic but fitting cover. By being printed in this form, the release is far larger than even Viz Signature releases, meaning it may be a bit large for some standard shelves but this also means that the aforementioned artwork that makes Gyo work so well is presented in a more detailed form than ever before. The release also features new color endpages as well as two side-stories, one which is a bit of a simple but, once again, dumb joke about a tragedy happening as soon as a family’s house is built. The other is a bit more intriguing as it involves human shaped holes and a force that seems to draw people to them.

Overall
Gyo is the type of manga that is meant to horrify readers by being as grotesque and disgusting as possible while portraying a horrifying scenario that, despite the ridiculous concept and the numerous plot holes, is held together by Junji Ito’s twisted illustrations. Fans of Ito’s works will find that Gyo is as nasty as stories like this come and those who like horror manga will likely require some preparation before delving into Gyo’s pages.