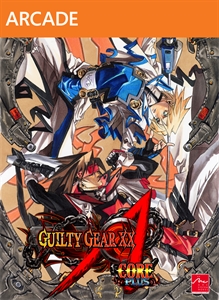 Overview
When playing fighting games, you want to develop a connection with a character and become comfortable with their fighting style. GUILTY GEAR XX ΛCORE PLUS offers a plethora of characters to choose from with a wide assortment of abilities and unique characteristics. But how effectively does the title collaborate a vampire, robot, policeman, and pirates all under one roof? Let’s check it out.

Story
You can expect little storyline and primarily just action from this genre. However, GUILTY GEAR XX ΛCORE PLUS pulls a clever move by offering a variety of modes to play. Once such mode is the Story Mode where you can pick a character and progressively fight through their own unique storyline. 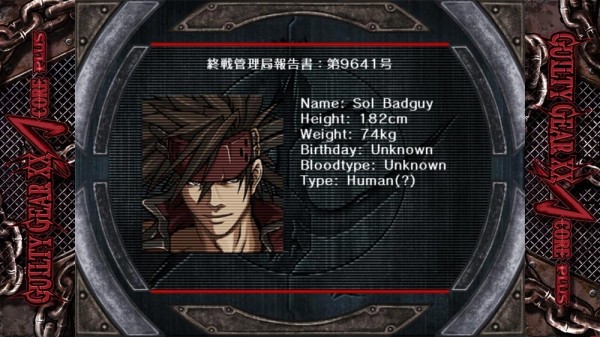 Story Mode proves to be interesting as well as cheesy in many moments. For instance, a character named May is searching to uncover her true identity. Some random encounters with other friendly characters will turn hostile in moments when she cannot access information readily. Why not welcome a new person to the Jellyfish Air Pirates, an all girl pirate crew, by sparring them on the deck of the ship? She eventually runs into a male character – wielding fan blades mind you – who provokes her to attack him to cheer her up. After defeating him, May is of course feeling a lot better about herself and continues to strive to discover her identity with her newly acquired friend.

Gameplay
Button mashing has potential to get you far in the title, but opponents become increasingly tougher and more responsive to every move. Therefore, training is available as an option from the start menu. Learning combos will be a godsend once reaching harder foes and performing unique missions. And if you choose to train a lot (let’s say 10 hours), you will unlock an achievement. After doing that I think you will certainly have a handle on any character.

Beyond training, players can take part in several different modes such as Arcade, Mission, M.O.M., VS CPU, Team VS CPU, VS 2P, Survival, and online matches. Arcade Mode provides the classic battle experience as players battle for the default two consecutive wins in order to continue to the next foe. The next opponent in line is normally harder to defeat with the final boss being ridiculous even on Beginner difficulty. 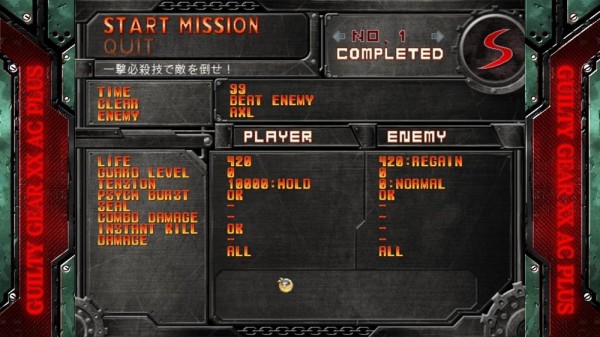 Twenty-five missions are available for completion in the game’s Mission Mode. Each mission offers players a goal to complete under specific conditions. Once the condition has been met, the player is given a grade according to his/her performance. Once such mission asks the player to use only normal attacks to defeat an enemy. Other missions will have the character’s jump disabled fending for dear life against a ground attacking opponent. How evil can the developers get?

Survival Mode is a thrilling gauntlet that lasts as long as your character has life. What makes survival tougher than other modes is that health can only regain a little per match, so the objective quickly becomes to kill opponents as quickly as possible. The only exception to this would be by attaining a “life max” bonus after defeating a shadowy figure at every 20 survival levels. The dark figure is just depiction of an alternate character with enhanced powers. 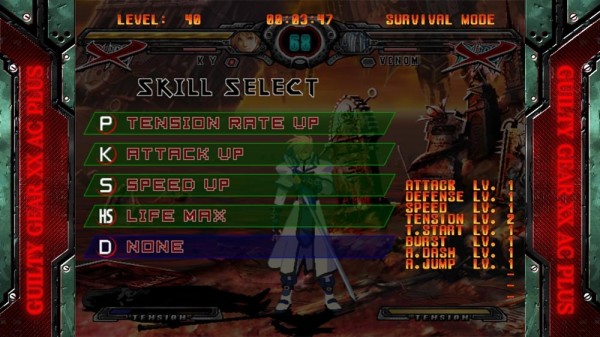 Probably the mode that is the hardest to master alongside Survival Mode is M.O.M. Your attacks deal damage to your opponent as well as drops money bonuses. As you consistently deal damage, the bonus meter raises and dishes out more cash to pick up. Life does not regenerate in M.O.M., so defend it well. Reaching a million and billion point levels will result in a nice cash-in achievement.

Versus Mode is what you expect out of a fighting genre. Pick two characters, and begin dueling each other. However, this time versus is split into a few categories: VS CPU, TEAM VS CPU, and VS 2P. Being self explanatory VS CPU and VS 2P hold the concept but one is facing a computer opponent and the other is facing a local player. TEAM VS CPU requires the player to choose three characters to face against three computer opponents. Once a character’s life diminishes, the next combatant chosen is up for battle facing the current opponent. The player with the last character standing is the winner. 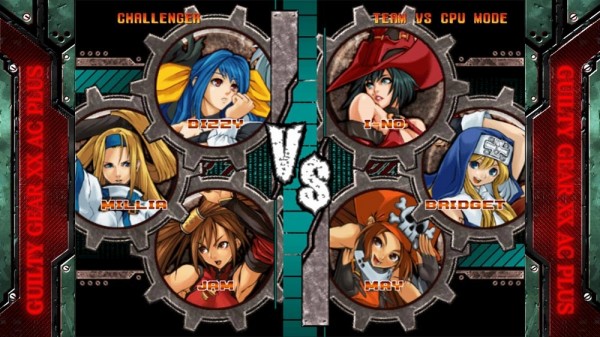 In order to play online against other real time competitors, you must have a Xbox Live Gold membership. The online portion allows players to fight in two separate formats: ranked and player matches. Player matches are non-ladder games that can be used as practice for online play. By engaging in over 100 of these matches, you will have unlocked an achievement. The negative aspects of player matches are that not many players are readily available and that there may be a waiting period for an opponent to accept/decline the match. After several attempts of using the player match lobby, I retrieved the same opponent offering a repetitive experience.

Ranked matches happen quite frequently and offer more of a variety in opponents than my experience in player matches. Upon completing a ranked match, your global ranking is updated on the leaderboard. Statistics are also kept track for win/loss percentages and total games played. Rank experience works like a level system with your first rank being “Civilian”. As you earn experience by winning matches, your ranking slowly increases.

Overall difficulty cannot be changed during matches nor battles. This, however, can be done during the main menu selection in game options. One aspect to point out is that even though there may be differences in switching from “Normal” to “Beginner” difficulty latter battles in Arcade Mode prove tough to beat.

Audio/Visuals
The entire anime theme intrigued my senses as I felt involved in a wonderful mix of Naruto, One Piece, and BlazBlue character types. With the “Heaven VS. Hell” message at the start of each match, characters truly emanate their good/evil auras. One character in particular named Eddie really shines as an evil manifestation. Just by looking at his character you can see an evil presence surrounding him like a blanketing shadow. In fact his moves meld into shadow figures! 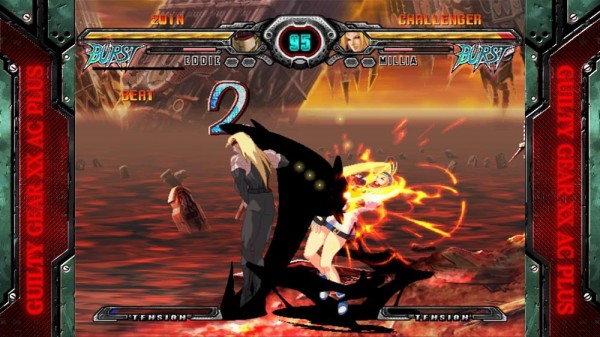 Another visual aspect that players can appreciate is multiple character skins. Being able to alter skins before battle allows players more personal customization to their favorite character. With five buttons able to select a character on the selection screen, there are five potential alternate skins. But the negative about having each of these skins available is that you cannot see them before the battle commences – only a downfall if you don’t know what button to press.

Special effects make the game stand a part from other fighting games. This can be seen through special moves like Potemkin using his strength to deliver a spine-breaking blow to Johnny. That’s got to hurt! Another instance that special effects can really be noticed is during the boss battle at the end of Arcade Mode. In my experience I-No – nearly topless lady with the guitar, uses an amp to blare musical notes every-time she takes significant damage. These attacks are avoidable, but the sporadic direction of these moves make her nearly impossible to defeat. 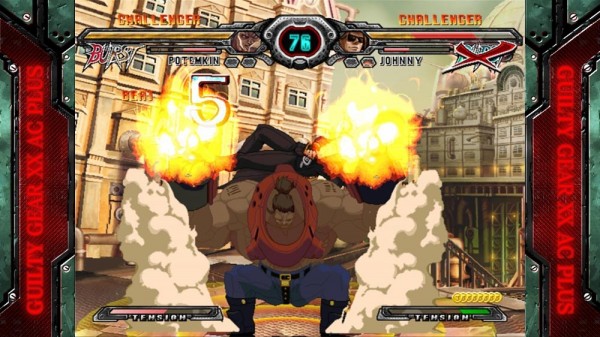 GUILTY GEAR XX ΛCORE PLUS did exactly what an anime is suppose to do – keep original voices and use English text. The voice acting in Japanese brings the characters to life by using raw emotion in every sentence. More often than not this emotional experience between voice and character is lost when dubbed to another language.

Overall
Negative aspects holding back GUILTY GEAR XX ΛCORE PLUS would be overall difficulty and online play. Button mashing will get you only so far until you have to train yourself to learn a character’s move list. The difficulty from “Beginner” to “Normal” can hardly be noticed in Arcade Mode when fighting the final boss. As far as online play, your experience depends on what mode you select and how long you are willing to wait for a match or new opponent. Ranked matches prove to be more diverse where player matches may have you waiting for opponents or replay previous ones.

In the end, GUILTY GEAR XX ΛCORE PLUS delivers a prominent fighting game on most fronts. You can expect a challenging experience in any difficulty and a variance of gameplay with all of its selectable modes. While this title has seen several releases, the move to Xbox Live Arcade will surely have a positive impact.