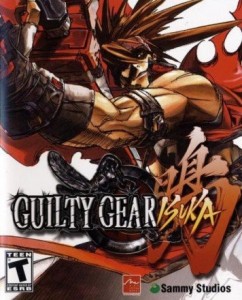 Overview:
Arc System Works has most recently been known for its stylized fighting series Blazblue. The series contains fast paced action with unique fighting moves and even more unique fighters. But before there was Blazblue, Arc System Works had another fighting series that helped lay the groundwork for what we are seeing today. That series is the Guilty Gear series. Guilty Gear Isuka was released on the PlayStation 2 back in 2004 and it took the standard fighting formula that Guilty Gear had been using and changed it up a bit. Now with DotEmu releasing the title for the PC, just how great does this title work on a computer?

Story:
Now previous Guilty Gear games before the creation of Isuka had a story mode of some sort. Whether or not the story was any good however is not the issue here. What is the issue is the fact that Isuka has absolutely zero story whatsoever to go along with it. There is no semblance of a story mode; rather players are presented an arcade option.

However this arcade option, which most other fighting games use as a story telling device, is nothing more than a series of survival battles. Rather than starting each consecutive fight with full health players are provided a small increase to what they had left at the end of their last battle. Occasionally a random fighter will enter the battle and force you to enter a new stage and sometimes entirely new opponents at the same time.  This event is announced by the words Here Comes Daredevil! but actually has zero impact on the non-existent storyline. 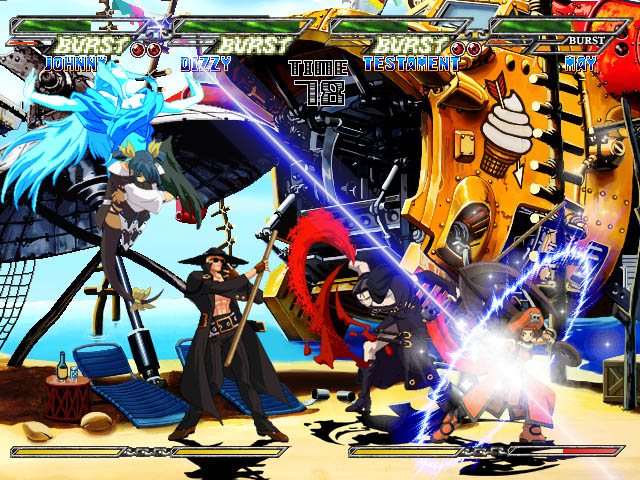 All the favorite fighters from past Guilty Gear games return with the addition of A.B.A. Again however anyone who hasn’t played a Guilty Gear series before will find themselves struggling to identify any of these characters as there is little introduction. Still it is good to see favorites return, meaning players can still choose to play as a man disguised as a nun that uses yo-yos and fight against a woman with two different colored wings and a tail that can attack with said wings.

Graphics:
Guilty Gear has always been a game that has had a unique visual style and Guilty Gear Isuka impresses just as much as previous iterations of the title. As a 2D fighting game the series as a whole has always stood out amongst its peers graphically and despite the seven year age, the graphical style chosen still holds up well today.

The anime-looking characters are amazing to see and every one of them has a unique look and character design. The vibrant colors that are implemented into the characters are ever impressive looking even on the PC. Players are given the option to modify the character coloration but playing the characters as they are is best for tradition’s sake.  Despite the hectic action that happens all at once players will not experience any frame rate issues as Isuka is not a heavy draw on computer resources meaning that most modern computers shouldn’t have an issue with the title.

Audio:
Just as with the graphics, Guilty Gear has always been famous for its driving rock soundtrack and Isuka contains exactly that. The soundtrack is very impressive to hear and fits right into the fast paced action that players will be experiencing. The music may not be for everyone as the songs are quite rock and roll heavy with a tinge of the metal genre thrown in but overall the soundtrack is quite impressive and fans of the series will not be left wanting. Newcomers will be able to appreciate the ability to enter the combat feeling easier due to the rock and roll soundtrack implemented in the title.

Gameplay:
Now your standard fighting game consists of fighters doing battle with one another until the health bar of one opponent drops fully. The same is true in Guilty Gear Isuka but rather than having one health bar players are given two. Fighters are given a full health bar as well as an orb that will replenish the fighter’s health automatically once.

Now while this inclusion isn’t anything too different from the standard fighting game, the rest of the game is. First and foremost the biggest feature touted for Guilty Gear Isuka is the fact that it can allow up to four different players to fight at the same time on computer.  You and a friend can do battle with two other computer opponents, or you can simply enter battle with a computer partner, or face a three on one situation through teams. However the game’s lack of online multiplayer is truly a hindrance here. Besides having your friend come over and share the keyboard with you, or use a gaming controller for the PC you will not find yourself actually making use of the four player options to do battle with your friends on one computer. 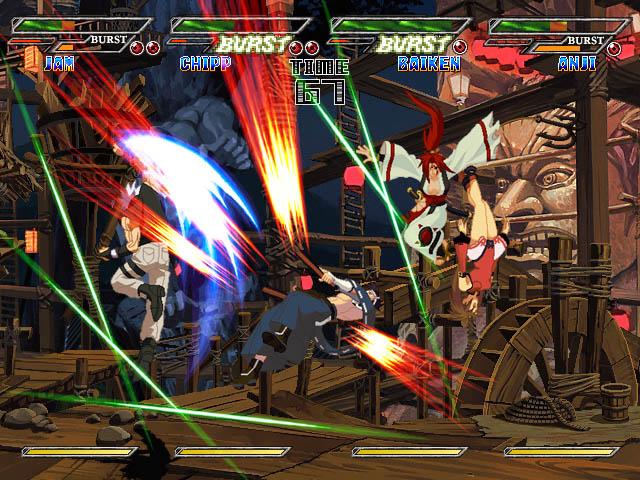 Now beyond the limitations of the platform itself, the battles for Guilty Gear have always been hectic affairs with wide ranging attacks able to deal out damage in a wide range. What makes matters worse however is the fact that players on the same team can attack one another without warning and in the heat of battle you may find yourself striking not only your enemies with a powerful strike but also your teammate. The multicharacter fighting system provides an intense combat situation at times and fighting game fans will find their skills put to the test but some may find the actual combat difficult due to a number of bizarre design choices.

Guilty Gear Isuka draws one of its ideas from another famous fighting game series, Fatal Fury. The idea taken from that series is the background and foreground fighting areas. Meaning players can switch between two different fighting planes during battle or even knock your enemy around these two fighting planes. Unfortunately this gameplay element actually becomes a hassle to be concerned about during the game’s fast paced battles, especially in four fighter fights.

Now what makes matters worse than the two separate fighting planes is the fact that players literally have to manually press a button to turn their character. In your average fighting game, if your enemy ends up making its way behind you your character will turn to face them either automatically or as soon as you attacked the next time. That isn’t the case with Isuka however, instead you will be forced to press a button to turn and face your opponent or else you will be at their mercy. Attempting to turn around by moving left and right is useless and will only result in your fighter receiving more damage. Managing not only the background and foreground fighting areas while also having to manually turn your fighter around is a major gameplay flaw.

This is only heightened by the fact that playing on a computer keyboard is far from ideal for a fighting game. Even with keys customizable outside of the game players will find themselves struggling to manually turn their fighter with one button, move around with another set, fight with another set and handle the shoulder buttons with another. Also it is interesting to note that actual in-game control customization still shows the PlayStation 2 buttons, meaning it is more or less a direct emulation of the title. 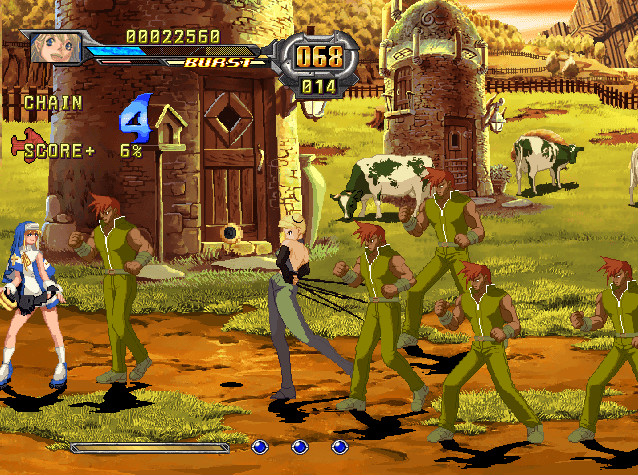 Now while most combat will take place through the arcade or vs. modes players will also be able to experience something called Boost Mode which draws upon the Final Fight style of action. Meaning players will take their chosen character and fight against mobs of similar enemies in a series of areas, constantly moving to the right as they defeat enemies. Unfortunately the inability to automatically face your foes is an almost game breaking flaw to the Boost Mode as you will often find yourself facing opponents on all sides, so while you may be trying to attack an enemy ahead of you, enemies will close from behind and start to deal out damage.  To make matters worse the game does not recognize the turning of direction while you are suffering damage which means you may find yourself locked into damage taking situations for periods of time.

During this mode you will be able to gain points that you can then implement into something known as Robo-KY II who is a robotic fighter that is able to learn most of the main characters’ fighting skills making him an all-around customizable fighter which is interesting to dabble with but most will still find their favorite characters more reliable.

It is worth noting that the game itself is also not very easy to pick up and play. On the easier difficulty players will find gameplay relatively easy to get used to and enemy fighters will fight well enough to provide a small bit of challenge. However on increased difficulty settings enemies become much more adept at using both the back and foreground fighting areas and their instant ability to turn and face your fighter puts you at an automatic disadvantage. The harder difficulties above easy or beginner are best left to those with a heavy amount of experience in Guilty Gear as new players will find themselves soundly defeated. 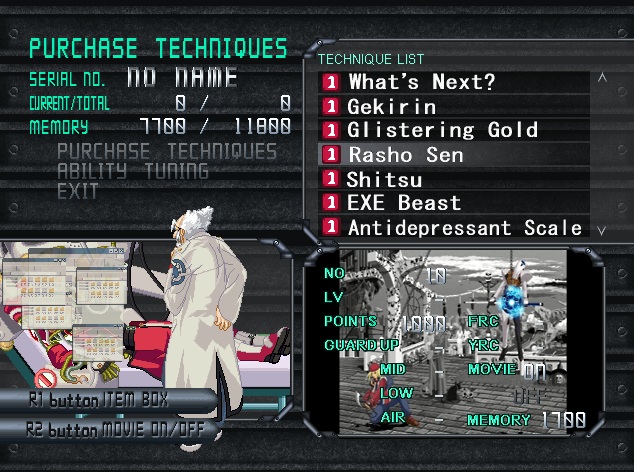 Overall:
Guilty Gear Isuka is a game that took an odd premise back in 2004 when it was first released. It took elements from a number of different games that were popular at their time and are still popular today. With four player brawl fighting similar to the Super Smash Bros. series, a Boost Mode similar to Final Fight and a foreground and background fighting system from Fatal Fury it seems like everything should blend together well. Unfortunately it does not blend well, with poor control implementation into the title originally the controls only become a further hindrance on the PC. With the lack of any substantial story mode and little to actually do outside of setting up random battles or fighting hundreds of generic enemies in Boost Mode, Guilty Gear Isuka does not stand up to the test of time and could have been better left in the past.

I give Guilty Gear Isuka