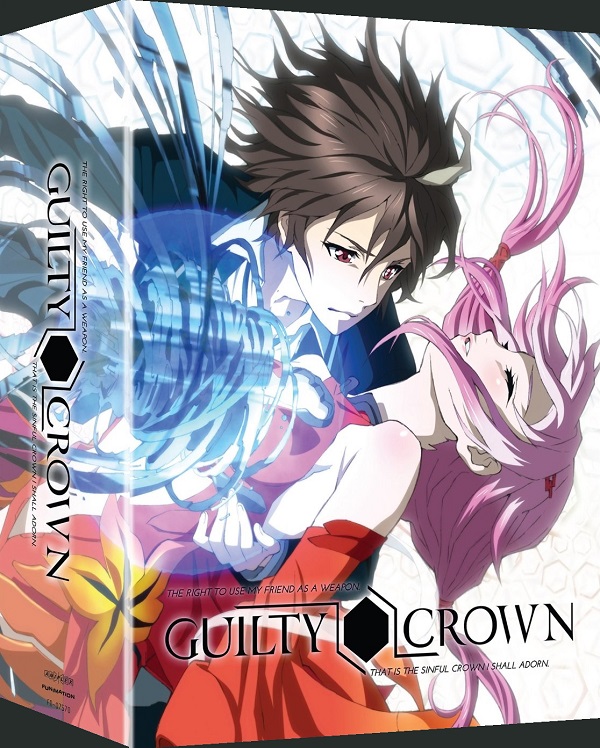 Overview
Reinventing a genre or coming up with something fresh and exciting is a difficult task in an age where many forms of entertainment are accessible at the drop of a hat and numerous stories are created every few months. Some stories use clichés as crutches to stay with the norm and simply make due with pleasing a set number of people while others attempt to try something different. Now that FUNimation has brought Guilty Crown to North America, does Guilty Crown: Part 1 manage to get the ball rolling on what may become a strong series?

Story
Our story takes place in 2039 Japan where, ten years prior, a massive outbreak of a virus termed the ‘Apocalypse Virus’ ran rampant through the nation. As Japan’s entire infrastructure begins to crumble, they seek help from the rest of the world and an organization called the GHQ is formed to assist Japan in not only containing the virus, but also keeping its government afloat. 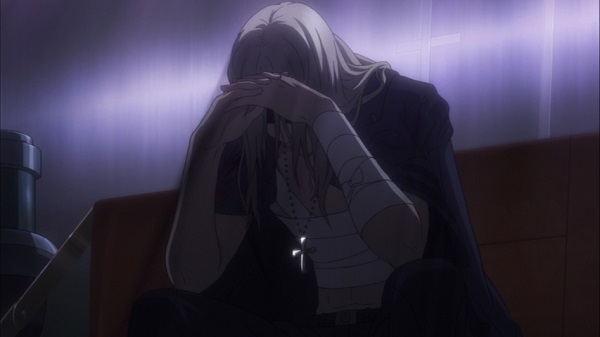 However now that ten years have passed, the GHQ still remains in Japan and while various members of the population occasionally fall ill with the  virus, many people are beginning to grow restless as their government is controlled by outside forces, ultimately turning the country into a police state. This has given rise to a resistance group named Funeral Parlor who seeks to cause trouble for the GHQ wherever possible and as Guilty Crown starts, it seems they are on the cusp of obtaining their greatest weapon.

Enter the main character of the series, Shu Ouma, a high school boy who has issues reading the feelings of those around him and awkwardly makes his way through school with only a handful of friends that are kept at arm’s length. Upon returning to what appears to be his home away from home, Shu finds a woman named Inori, a popular internet songstress, huddled over in pain alongside a little robot. Before Shu can find out exactly what is going on, GHQ agents called the Anti-Bodies enter and take Inori into custody, on account that she is a member of Funeral Parlor but don’t notice the robot that accompanied her. 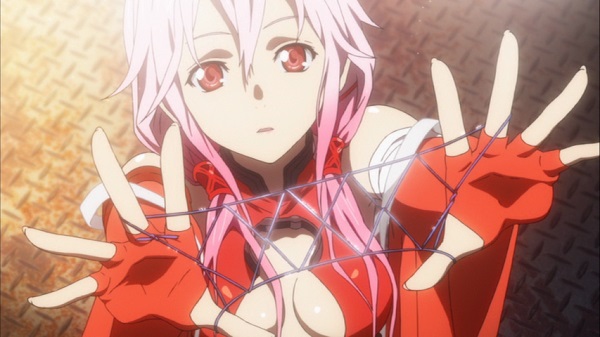 With the robot providing a guide, Shu finds himself deep in the ranks of Funeral Parlor with a special vial. Shortly after meeting with the group’s leader, Gai, the GHQ begin massacring the city, forcing the group to act. After being told to flee with the vial and protect it with his life, Shu stumbles upon Inori as she is about to be killed and attempts to save her life at the risk of his own. By doing so, the vial shatters and triggers the ‘Void Genome’ hidden within, giving Shu the ‘Power of Kings.’

Gifted with this power, Shu is able to draw Voids, special tools unique to each individual, from those around him. After drawing Inori’s Void and dispatching the threats to the city with her sword Void, Shu is drawn, if not practically forced, into Funeral Parlor as he now is their only real hope at victory. This leads to numerous situations involving Funeral Parlor and Shu gathering allies, thwarting the GHQ’s plans as the main storyline is built through side events and ultimately begins to culminate in the last few episodes of Part 1. 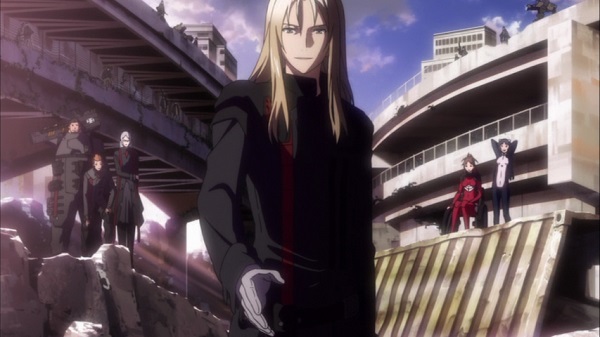 At surface level, Guilty Crown features numerous clichés that are all too familiar with anime viewers at this point. From a post-apocalyptic police state to a withdrawn high schooler suddenly gifted powers that struggles with whether or not he should use these abilities, Guilty Crown is something that walks a well tread path. However despite the numerous clichés that run rampant through Guilty Crown, there are rather unique circumstances pertaining to Shu’s situation that surpass a few of them.

Thanks to the nature of his abilities, the only time that he can make use of them is by drawing out the Void of someone near him, rendering the person unconscious, leaving them completely vulnerable to danger around them and causing short-term memory loss, leaving them with no memory of the event as Shu guiltily uses their hearts in combat. Even on the emotional level, things are not always as they seem, especially when it comes to the enigmatic Inori. Despite growing closer to Shu, going so far as to transfer to his school and live with him, it begins as simple military procedure as she serves as both his watch dog and body guard, but eventually grows into more as the series moves along and the story continues to develop and drops hints about a potentially dangerous past that the two shared. 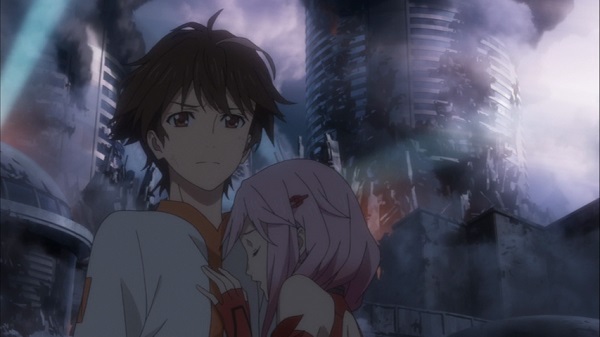 Thanks to the episode count of the series, Part 1 of Guilty Crown only contains the first eleven episodes of the series and ends up leaving viewers with a hefty cliffhanger. However at this point there have been numerous plot points revealed, sometimes at a rather blistering pace that feels rushed, hints about both Shu and Inori’s past and more given to viewers to entice them into continuing the series into Part 2.

Visuals
One thing that viewers will immediately notice when watching Guilty Crown is how impressive the series looks both at a standstill and in motion. The character designs are incredibly detailed and varied well enough amongst the cast and the background scenery tends to be just as detailed and varied. Both of these qualities are then made even better by an impressive use of color and great attention to detail. 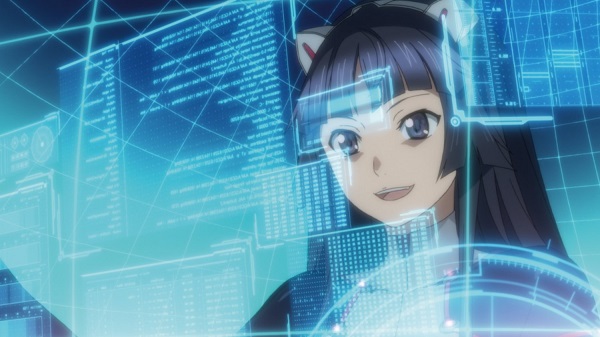 Guilty Crown really shines its brightest whenever a Void is in use, as each Void has a different look to it and effect in battle, though most of them involve intense, fluidly animated combat sequences with a lot of action happening on the screen at once thanks to the silver banding that most of the Voids exude when in use. It also helps that the various CG elements of the series, such as the Endlave mechs, are blended into the series so well that it is hard to notice the difference between these combined animation techniques.

Audio
As per standard with a FUNimation release, Guilty Crown: Part 1 comes with both the original Japanese voice track and their own English dub. Unlike other releases however, FUNimation has not changed the songs sung by Inori into English. Rather at these points, the dubs remain the same as Inori sings in Japanese, probably for the best considering the importance of these songs. The English cast itself is rather nicely handled with each of the voice actors fitting their roles nicely, but not much else. 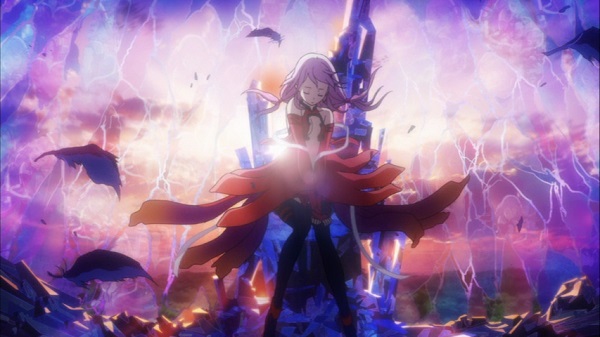 One thing that Guilty Crown has is an amazing soundtrack. While there are a fair share of simple instrumentals that are played in the background of various scenes, the first half of Guilty Crown features numerous background tracks with Japanese vocals. Every time one of these songs play it helps make that moment feel all the more important, though it is disappointing to see that FUNimation did not provide English subtitles to accompany the vocals to these songs. The opening theme, “My Dearest” by Supercell is accompanied by some rather breathtaking visuals and is quite a treat for the ears while the ending “Departures” by Supercell is a basic ending song that fits the series well enough.

Extras
With Guilty Crown: Part 1 FUNimation has released a Limited Edition version of the anime which, while more expensive, comes with a number of physical bonuses as well. The series comes in a sturdy chipboard holder with artwork of Shu and Inori on the front and houses Part 1 (which has a reversible cover), a holder to replace Part 2 with, and two softcover art books. Both of the art books contain some full color illustrations as well as various production art, background pieces, explanations of characters and notes from the staff and looks at some of the character sketches used in production. 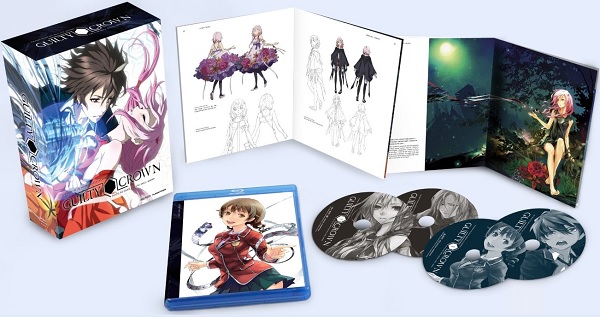 As for on-disc extras, Guilty Crown: Part 1 comes with a number of bonus features, such as standard FUNimation bonus features like two commentary tracks, textless versions of the opening and ending song, with the opening theme receiving two versions, promotional videos and TV spots from Japan as well as trailers for other FUNimation releases. 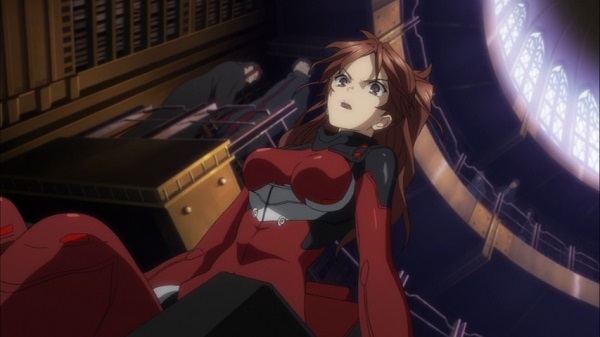 Outside of these inclusions, there are also a few other on-disc bonuses, such as all of the episode previews, a Guilty Crown 4-Panel Theater which is seven minutes of chibi comedy segments featuring Guilty Crown characters voiced in Japanese, and a ten minute interview with the production staff at New York Comic Con back in 2011.

Overall
Despite being cliché on the surface, steeped in clichés in fact, Guilty Crown: Part 1 manages to deliver an interesting twist to a few of these clichés that make them rather interesting but leave too many left untouched. By flinging plot point after plot point at viewers and hinting at more to come as the upfront storyline is delivered at a brisk pace while the sub-plot slowly builds, makes viewers become invested in the storyline and interested in what is still to come. Combine that with some breathtaking visuals, and a nicely handled English dub accompanying an amazing soundtrack and Guilty Crown: Part 1 delivers a gorgeous action packed and intriguing opening that will hopefully be continued throughout the second half of the series.