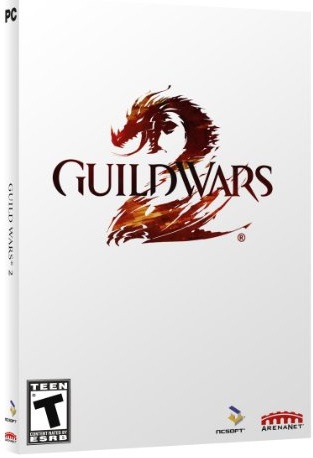 Guild Wars 2 is the follow-up sequel to the original Guild Wars franchise. As a free-to-play MMORPG, you would expect the quality to be lower than your average subscription based MMORPG. However, this is not the case. In fact, the opposite is true. This game has a higher production value and quality than most subscription based MMORPGs on the market. Read on to see our full impressions of this marvelous game.

The story in Guild Wars 2 is being touted as a story that is personal to your character. According to the developers there are 1000s of different combinations available, which means that players are supposed to be seeing fairly different stories. Unfortunately, from what I’ve seen so far is that the stories are still pretty similar early on. 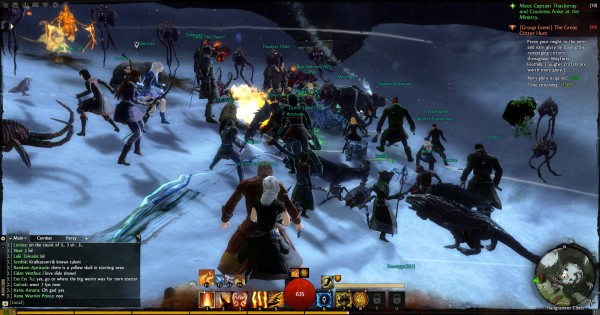 However, what’s cool about the story in Guild Wars 2 is that you can completely ignore it if you want to. This is because you actually have to zone in to some areas to access the story and by hitting a no prompt, you can just bypass it anyway. In fact, the only story elements that are forced on you from my experience are the storylines that you run through in dungeons. However dungeons have both a story and explorable mode, meaning you can go back and complete the dungeon without the story being present.

From what I’ve experienced of the player story so far, it is a pretty interesting affair that has some amazingly difficult moments if you’re soloing. However, what makes it more difficult is that you can’t over-level in this game as it pulls your level down to adjust to the mission. So make sure you over armour and over equip yourself for difficult quests.

Overall the story is pretty entertaining and provides some difficulty in some missions. Players can skip it if they choose. Mostly anyway. 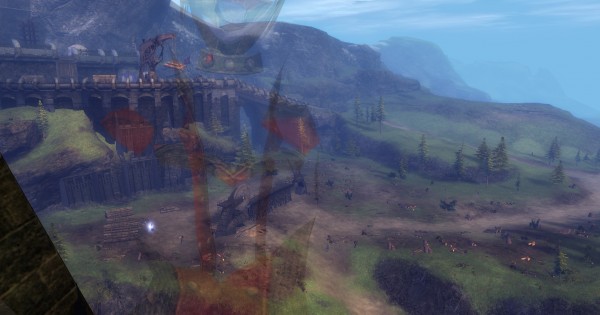 The gameplay is easily Guild Wars 2’s strongest selling point. The team over at ArenaNet have really outdone the entire MMORPG genre with this title. I really can not sing enough praise for the developers of this game in regards to the gameplay. This section will probably devolve into me fallating ArenaNet’s nether-region, but I will try to avoid it as much as possible.

What’s incredibly great about the way the gameplay in Guild Wars 2 works is that all the elements of the game have integrated incredibly well. For instance, there are no static quests that feel like they were thrown on top of the existing world for players to do, but rather, questing has become integrated into the way the world works. You as a player feel like a part of an eco-system, rather than some epic predator at the top of the food chain who’s only motivation is XP and epic-loots.

What this essentially means is that instead of running up to some random guy, getting a wall of text that you skip and running to a point on the map to kill a bunch of things. Instead, you end up running along the map and then discovering that something needs to be done, and then you do it. There are a few examples of this, but most obviously are the heart shaped points which have you completing certain tasks to unlock a vendor with some nice items and the dynamic quests which add to the natural feel of the map. 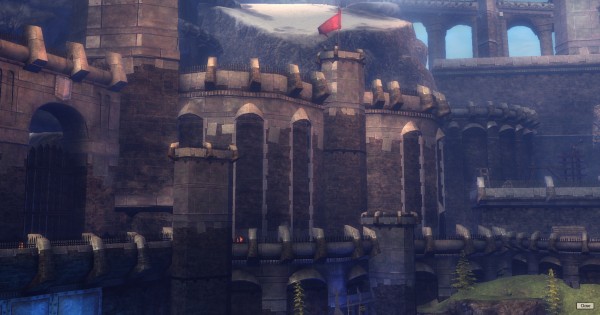 With the dynamic quests, essentially a chain of events will occur that will affect the world in some way. For example, there is one series of dynamic quests where you must defeat centaurs and blow up a bridge. After the destruction of the bridge, you must then stop centaurs from trying to repair it. If you fail, the centaurs fix the bridge and you have to try and blow it up again, and if you succeed, then you must defend it again later from more repair centaurs. It’s things like this that make the world in Guild Wars 2 seem really alive.

At first glance, someone who has played Guild Wars 2 will probably not liken the combat to that found in any other MMORPG released. I was actually going to quickly praise the battle system in this game as unique and new, but after really thinking about it, I kind of feel that this is the battle system of Guild Wars 1 with a lot more freedom and dynamics. For example, you are still locked down to 8 skills and one of those is an auto-attack skill for most weapons. However, where this game differs is that you are only able to select 4 of these skills (assuming you’ve leveled sufficiently and unlocked these additional skills) and that your position on the battlefield is now much more important.

What I mean by this is that you can move whilst casting spells or using skills to quickly get out of dangerous areas or to kite enemies. You also have the ability to dodge oncoming attacks by hitting the dodge key or double-tapping a movement key in the direction you want to dodge. This makes things like line-of-sight and kiting much more important in this game. 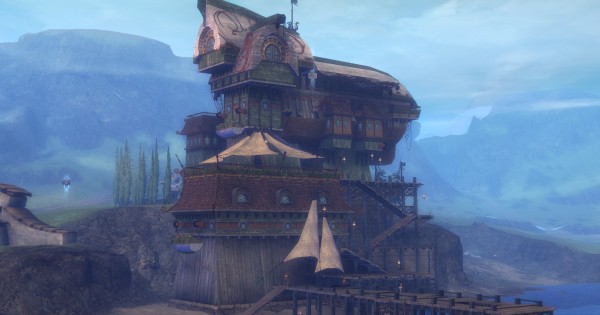 What I really (and I mean -really-) liked about this game is that the dungeons (at least so far) have not been a cakewalk run like in other games in the genre. Players have to really be at the top of their game to even advance in these dungeons. This may just sound like the developers have thrown in a bunch of over-powered enemies, but that’s not true. For players who have yet to undertake a dungeon, they can expect a bunch of traps and other tricky elements that will probably defeat them if they are not careful.

Next thing I want to discuss is the PvP within the game. This most predominantly occurs in the World vs. World vs. World Eternal Battlegrounds which pits three servers against each other in a battle for supremacy. What you will find most awesome about this are the incredibly large scale skirmishes that take place around the strategic points on the map. What I’m really liking about the WvWvW Battlegrounds though is that leading the battle in these will give your server certain advantages over other servers in regards to both PvP and PvE.

Unfortunately I’ll end this section on a sad note. As of the time of writing there are no Guild Halls in the game. Which kind of sucks. I have also yet to encounter any kind of Guild vs. Guild PvP content which kind of takes the Guild and Wars concepts and throws them to the side. However, I’m hoping for these additions in the future. However there is Guild armour skins that show your emblem and stuff, so that’s pretty neat. 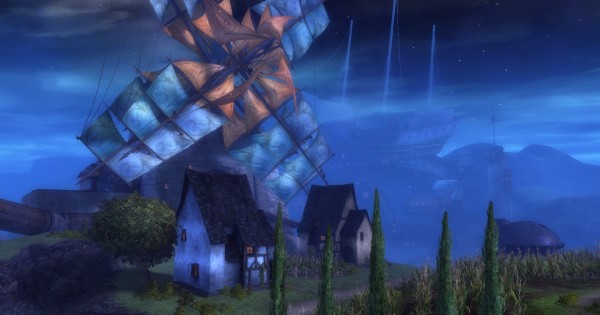 I’m actually really liking the visuals in Guild Wars 2.  I mean they’re not the uber-realistic fare that we’ve come to expect from games like Battlefield 3, but they really do not need to be. The developers have really worked within their limitations to create, what I believe is, the most beautiful gaming environment in an MMORPG.

Now you’re probably thinking something like: “But man, didn’t Final Fantasy XIV push out fifty-trillion polygons and have an incredibly high-res set of materials for the world?” – or something like: “But didn’t you say that about TERA?” – to that I answer, yes those are both correct. But. This was before Guild Wars 2.

What I really liked about the Guild Wars 2 world is that nothing looks particularly copy-paste. In fact, it’s almost as if the entire game-world was generated by hand and a bunch of unique looking assets were built to just to make this world feel that much more pretty and unique. in comparison to its competition. 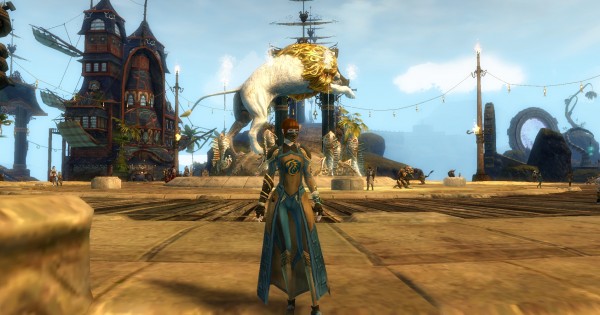 I’m actually really liking the way the armour sets in the game have turned out. Each piece of armour looks both aesthetically pleasing while being mostly functional. I have to give massive props to the person who designed the medium armour skin for the Guild armour. It reminds me of Saber from Fate/Stay Night for some reason.

Visually speaking, Guild Wars 2 is an excellent game. Instead of being a slave to its own technical limitations, it has instead embraced them and made them work for it. As a result we have an incredibly beautiful and vibrant game that does nothing but excel.

The audio in Guild Wars 2 is of a superior quality. What I particularly liked about the audio found in this title was that everything had a really impacting kind of sound. For instance, an AoE attack would have a nice kind of resonating sound so that you knew that it was really pouring on the pain.

The soundtrack in the game, if I’m not mistaken, is a bunch of new tracks blended in with a bunch of the tracks from the first Guild Wars games. Regardless of what it is, it fits the games tone perfectly and as such it isn’t really that easy to critique it. Good job Guild Wars 2 team.

Guild Wars 2 is one of those games where all of the elements found within the game have worked incredibly well with each other to create an experience that is simply amazing. The title feels a lot more like an eco-system than it does a bunch of individual components working together or against each other. I really wanted to give this a perfect score, but I know that the developers will probably find a way to make me eat this score later by making it even better.