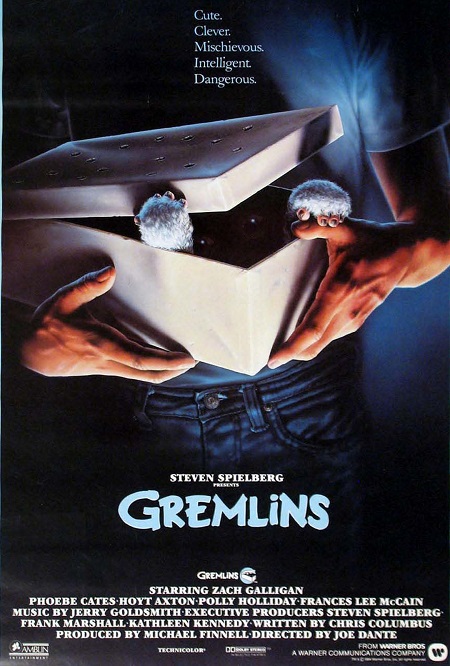 The urban legend of gremlins grew out of superstitions of WW2 air crews who attributed mechanical failures in aircraft to the malicious attentions of these tiny monsters. These were the same guys who came up with the idea of ‘Murphy’s law’ wherein anything that can go wrong, according to the law, will go wrong. From these two facts, one can ascertain that perhaps being a pilot during this particular era was something of a gamble. Rather than gamble with other movie options for the evening, I instead decided to revisit the popular 80s interpretation of the monsters at the In the House screening of the film Gremlins.

The MC for this evening was a very lonely and hungover David ‘Quinny’ Quinn who soldiered on regardless. In between sparring with snarky audience members and reading a bit from the Gremlins picture book (which somebody had brought in), he shared with us some interesting tidbits of movie trivia. The one I found most interesting was the fact that the puppeteers working on the set hated the Gizmo puppet and made a game of planning out interesting ways to ‘kill’ them. Death via dartboard was a popular option which ended up making it in to the film proper (kinda). After Quinny had finished warming up the audience, the screening proper began. 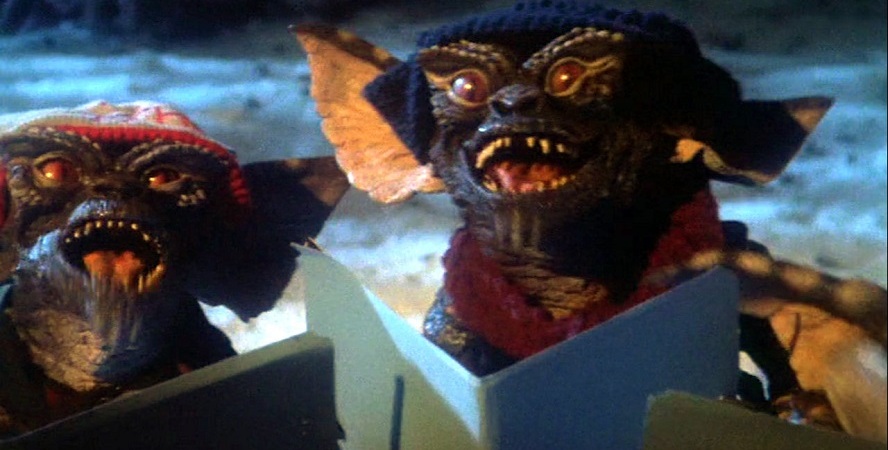 The film opens with Randall Peltzer (Hoyt Axton) as a hapless but optimistic inventor attempting to hawk his wares to the owner of a Chinese curio shop. Instead, Randall is charmed by the cute nature of an unusual little creature in the shop called a “mogwai” which he takes home as a pet to his son, Billy (Zach Galligan). He directs his son to follow the three rules given to him for care of the pet: don’t expose the mogwai to bright light as it will kill it, do not let it get wet, and never feed it after midnight. Following in the rebellious nature which inherent in all Americans (‘Mericuh!), Billy almost all of these rules immediately upon gaining responsibility over the adorable little creature which he names Gizmo. Things almost immediately go downhill with the idyllic town of the film being brought low by tiny monsters.

The film itself has a range to it which is honestly lacking in the characters onscreen. The first half of the film depicts fairly hum drum melodrama unfolding in an almost idyllic depiction of a small American town. When the gremlins finally arrive on set, the film takes a turn directly into horror-sville, population: you. The film does build up to the horror elements somewhat, but it’s still a bit of a disjunct to go from showing us cute and cuddly furbies to suddenly killing tiny monsters quite gorily using kitchen appliances. If you can handle the film’s tonal whiplash then you’ll probably get a kick out of it. 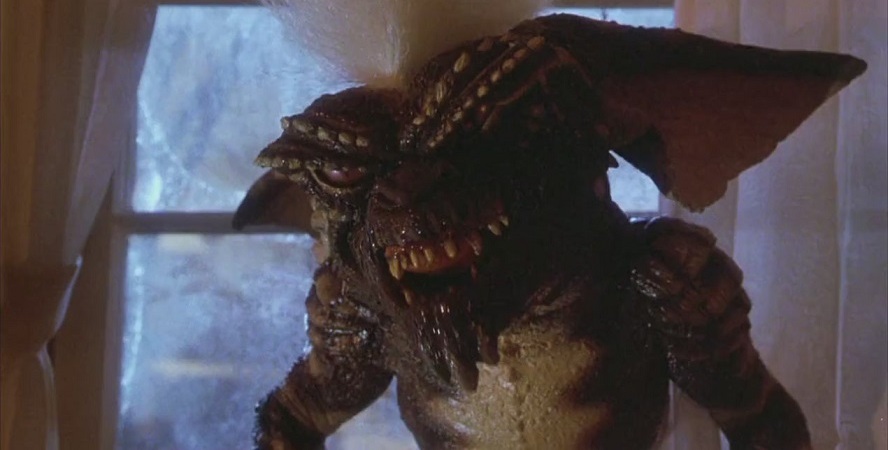 Largely, the human characters and their motivations fall to the wayside once fecal matter hits the proverbial fan with the gremlins finally letting loose upon the town. From the second act onwards it’s pretty much all puppet mayhem all the time with very little character development or even screen time for anyone who isn’t made out of plastic. The characters we got introduced to in the first half of the film largely serve as hapless victims for the mischievous depredations of the little gremlin monsters. We see them get syringed, catapulted via chair lift, and crushed by tractor. It’s all deliciously macabre with plenty of slapstick to counterweight the actually somewhat terrifying events which unfold.

The gremlins themselves are actually a fairly compelling onscreen presence. They’re all pretty much two-dimensional as far characters go, but they’re played in such a way that you kinda see them as live-action cartoons. Another apt comparison would be to a more murderous and malevolent version of the muppets. This is largely a good thing as the human characters were rendered in similarly broad characterisations of virtue and villainy. 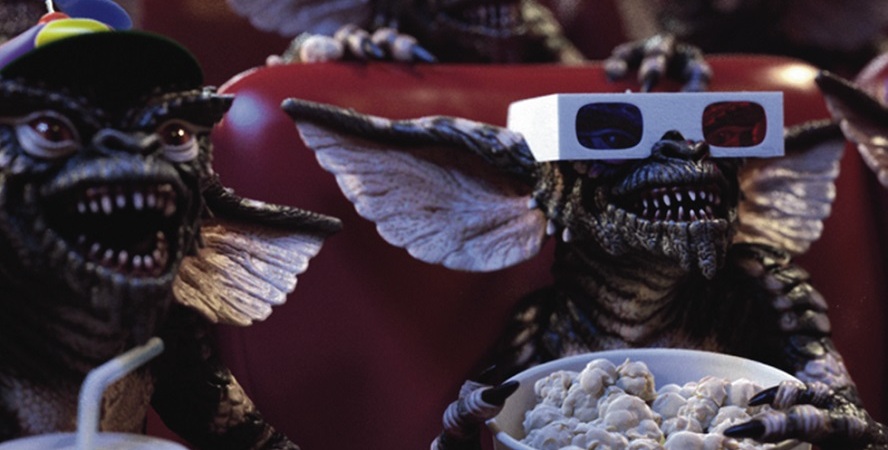 In terms of the puppetry and visual effects, the film really hasn’t aged all that well. To be fair, the film is over three decades old and I doubt many special effects in today’s films would be able to stand the test of being compared to contemporaries thirty years down the line. The mogwai puppets still have a strong creep factor to them even before they morph into the vicious gremlins. The way that their eyes moved was pretty unsettling and not to mention the addition of human-looking teeth to the creature design of the mogwai. Inversely, all of the onscreen gremlin deaths are pretty gory/satisfying to watch as you see them get chopped, blended, and microwaved.

The film features some very strong visual comedy and slapstick skits however. The scene in the bar is definitely worth highlighting as you see the gremlins get rowdy as they play around and get up to mischief. That scene featured some moments which genuinely made me laugh out loud, which is high praise from me considering that visual gags so rarely find their mark with me. 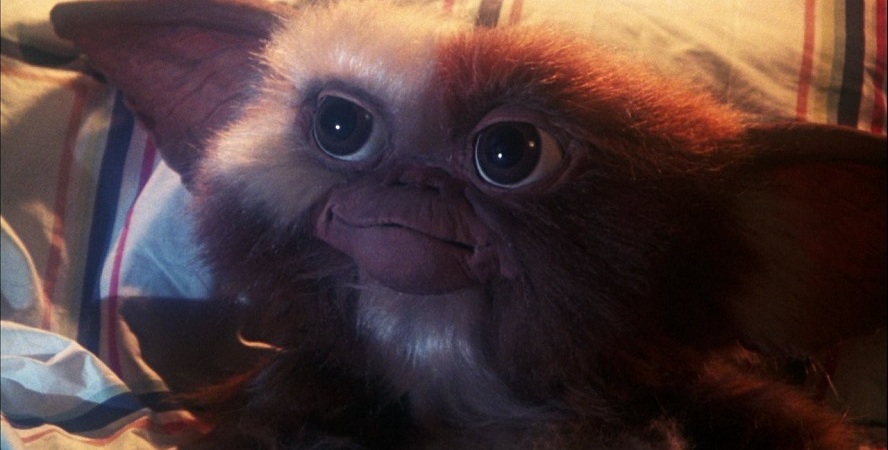 The film’s soundtrack is largely unremarkable and passes by without leaving too much of an impression. The film makes use of aural clichés with the background audio taking on a more Asian influence in its melody but otherwise the orchestral score performs the job of reinforcing the emotion of a scene. The one exception to the buck the general rule and actually standout is the gremlins theme itself which sounds like a twisted version of a Christmas Carol. Notionally, Gremlins is a Christmas movie and its theme does a pretty good take on demented Christmas jingles. 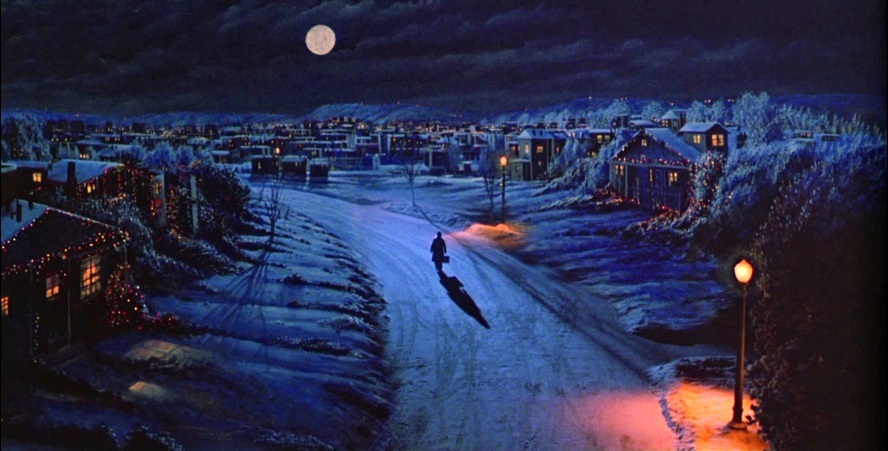 Gremlins was an interesting choice to round out this year’s In the House season as its Christmas movie. The story and plot largely serve as a vehicle to let the gremlins loose from the second act onwards. The film was at its best for me when it focused upon the cartoony slapstick of the gremlins entertaining themselves which provided fertile ground for plenty of visual gags. The gremlins theme is also a catchy standout from the otherwise standard soundtrack which punctuates the film. Overall, it was a fun film to end the year with, but it certainly did not match the highs of previous offerings like Die Hard. I look forward to coming to In the House in the new year for the next season.
Capsule Computers review guidelines can be found here.

Gremlins is a competent comedy with some genuine moments of laughter to be had.
7.5