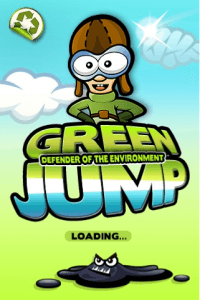 Purpose: Baboonix LTD. and Greenpeace collaborated to create Green Jump, aDoodle Jump-esque game where you play as Greenie, who tries to escape the rising air pollution by jumping on clouds.  Both companies are dedicated to helping the environment, and include nifty facts and tips at the end of each session of jumping.

Graphics and Sound: Green Jump is a very clean looking game. Its crisp animation style includes vibrant, bright colors that seem to pop off of the screen.  Baboonix LTD. also does well in its usage of color, making the ever-rising smog look ominous, while portraying the bright clouds and sky as very happy things.  The soundtrack, although being around a thirty-second loop, remains fresh and uplifting, like something you would hear from an early Kirby game. 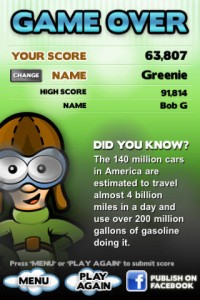 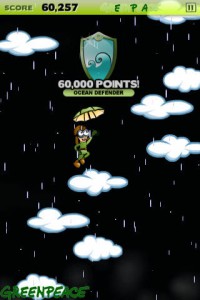 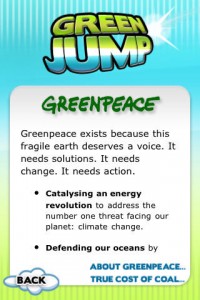 Gameplay:  The basic purpose of Green Jump is to jump as high as you can away from the rising smog without falling off the clouds.  You control Greenie like you would any other “Jump” game, by using the accelerometer to move left and right.  There is a slew of the regular powerups to use like a platform that boosts you high up into the air, and a bird and a cape Greenie can hang onto to fly higher into the sky. You can also earn achievements, post your scores on Facebook, and access global leaderboards to compete against other people.  There are also, however, a few twists that separate Green Jump from the average jumping game.  One is the smog.  The smog is ever-rising, meaning, if you jump on the same platform too long, it will eventually engulf you and you will lose.  There are also tar clouds where, if you jump on them, Greenie will stick to them for a second or two.  There are also scattered letters of GREENPEACE to collect that will give you an extra life when you collect all of them.

There were, however, two major flaws I found while playing the game. The first flaw is the consistency of the clouds while jumping.  Often I thought I had jumped high enough to reach the next cloud, when I suddenly fell through it and lost.  The second flaw was with the achievements.  When I first booted up the app, i was prompted to accept the use of their system to record achievements. I accidentally pressed no.  I soon after realized my mistake, but after searching vigorously for a way to change it back, I found none.

Overall: I found this game to be a good educational substitute for Doodle Jump, but, with a few changes and updates, this could end up being a great game. I give this game an AVERAGE rating of 6 capsules out of 10.