The genre of physics puzzler has more or less dominated the mobile gaming market ever since Angry Birds hit the AppStore back in 2009. Since then, there have been many variations on the genre, and even what could be termed “Angry Birds Clones”.

Greedy Penguins is one such variation, and one that manages to make it’s gameplay decidedly distinct from the Angry Birds franchise. 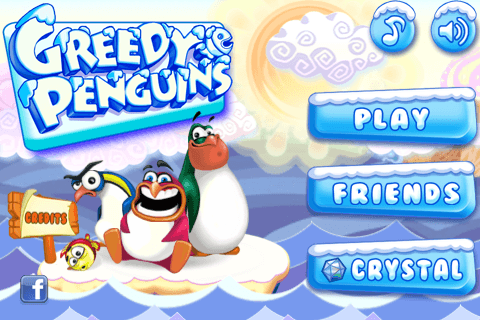 As with most puzzle games past and present, the story is thin at best. The basic idea is you need to feed each penguin their favourite (matching colour) fish, afterwhich they release a pink ice-cream cone, which you then tap to deliver to the walrus, pig, or other random animal lazing around somewhere.

I don’t know why you do this, or if it makes any sense whatsoever, but you don’t play this game to learn about penguins, the human condition, or grow as a person… you play this game to excercise your brain, pit your wits against the game’s creators, and to pass the time. And it definitely succeeds in that endeavour.

Each puzzle provides you with a number of different coloured fish, hanging individually in ropey-net-type-things, and dares you to deliver those fish to their corresponding colour penguins. You have to roll them around the level up and down ramps, hurl them across the screen using cannons, and avoid letting them roll into the ocean below.

The controls are nice and simple. For the most part, you’re tapping on fish to free them from their nets, letting them drop, slide or fly into the gaping mouths of the greedy penguins. As you progress through the stages more obstacles and gadgets are introduced (the classic fans with switches and cannons to name a few), calling on you to put more thought into the setup and ordering of your actions to best achieve your goal. 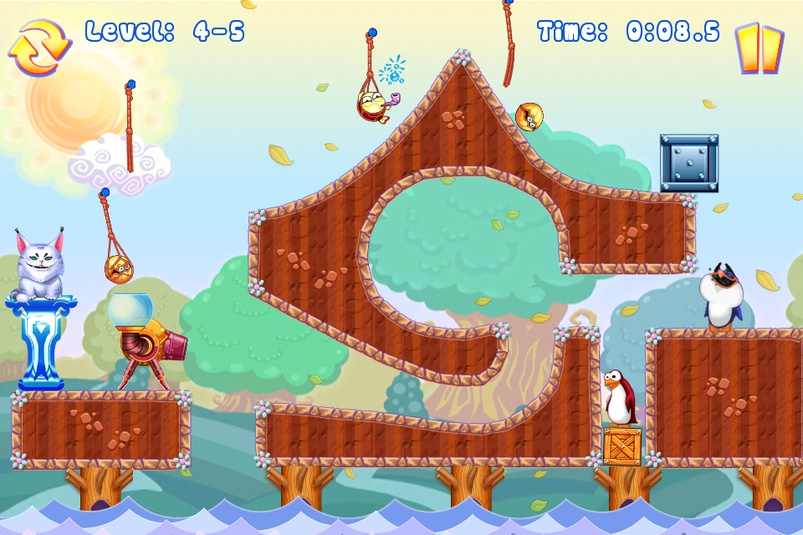 Once a penguin receives their fish, they dive into the water, letting you send along the next fish to reach other penguins. Send the wrong fish to the wrong penguin, however and it’ll… make him “ill”, and you’ll fail the level. More on that later.

The penguin will then let their pink ice-cream cone start float skyward, which you then need to tap to send it over to that particular stage’s mascot. These mascots mainly serve as an identifier to the stage, and basically just sit in the level pulling faces and the like until you send them some ice-cream.

Once all of the penguins have been fed, you’ve completed the level, and are scored based on time taken and how many cones you grabbed. You are then presented with a fish ranking between 1 and 3, which of course go towards unlocking the next stage. 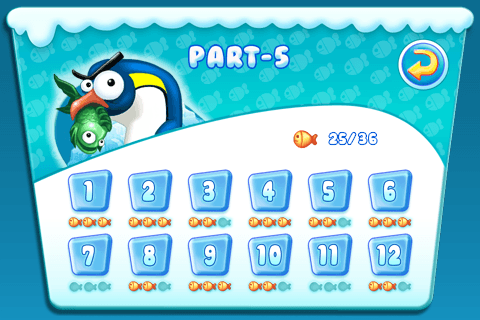 Each stage consists of 12 levels which slowly ramp up in difficulty, but largely keep things straightforward, which is a welcome change from the usual steep learning curve in these kinds of games.

The gameplay is pleasant and stays mildly challenging until only they last few levels of the final stage. That said, it is very short. There’s a total of 72 levels, but due to the lack of difficulty, you’ll be able to blast through the game in a couple of hours, tops. This won’t be an issue if you’re playing it in 5 minute intervals when you’ve got a little time to waste, but if you’ve got a lot of time to waste, you may be disappointed by the game’s length.

The time you do spend playing this game, however, will be filled with fun, mildly challenging phsyics fun.

The game can change between landscape orientations, mute buttons for music and sound effects, along with GameCentre and Crystal integration. 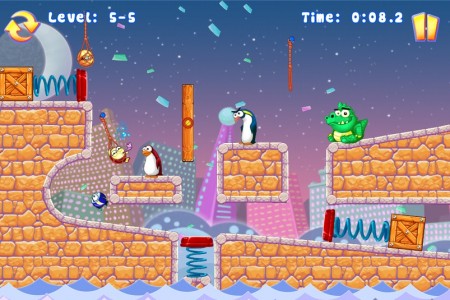 The game’s visual style quirky but largely stays on the cartoony side of the line. Each colour penguin and each stage mascot can be poked at any time to see a unique animation, and even have a selection of humourous idle animations and sound effects that play intermittently.

When a penguin eats something he shouldn’t, he immediately barfs it up, in a pseudo-graphic, though decidedly comical way. When a mascot eats an ice-cream, he gives a satisfied groan afterwards. 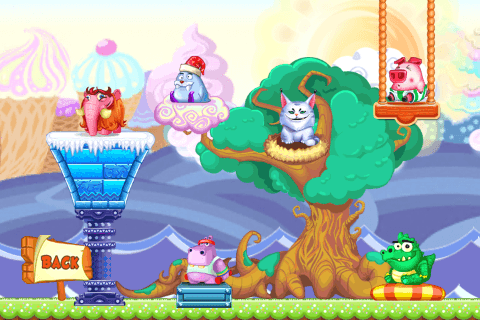 These little animations are very well put together, and do a lot to keep your interest. You even unlock new animations for the mascots as you receive more fish at the end of the levels, again, keeping you engaged with the characters and amused in general the whole time you’re playing the game.

The music, too, stays playful and unobtrusive in the background, not particularly wowing the player, but keeping you in a trance of “aww”, “teehee” and “that’s so cute“.

This game is a joy to play from beginning to end. And although  it doesn’t last very long, the time you spend on it is rewarding and humourous, and serves as a great pick-me-up in the coffee break of a long day, or as an alternative to the more hardcore physics puzzlers out there.