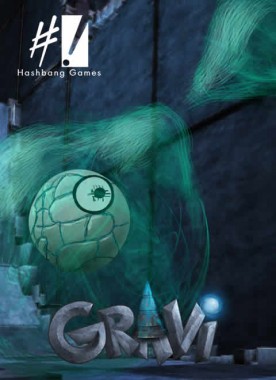 There is no story in Gravi. There is no explanation on why Gravi and Anti Gravi seem locked in eternal battle or why Gravi is attempting to escape the factory like setting of destruction. Gamers will simply have to just go with it. 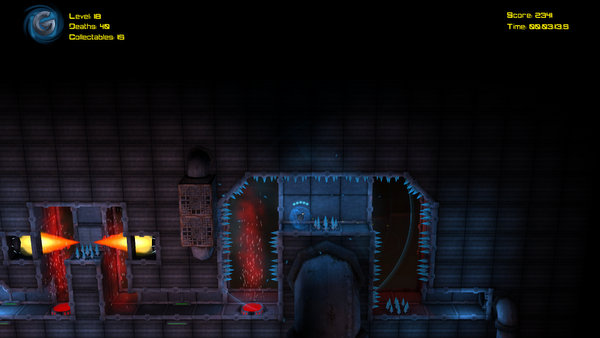 Although Gravi is in 3D and has several areas where it looks like there is some level of 3d movement similar to what is found in the Little Big Planet series, Gravi is strictly a 2d puzzle platformer. Our little blue ball of energy can move forward and backwards while using two different abilities. His main skill is to fling a grappling hook that will slingshot Gravi towards the point of impact. The second ability throws out an orb of energy that will shrink Gravi down, allowing him to squeeze into tight spaces that would otherwise be off limits. Blocking Gravi’s way is a variety of traps and hazards including electrified floors, jets of flame, and spikes. The player has an unlimited amount of lives to conquer each level. Levels are ranked based on how long it takes to beat a level, how many times Gravi died, and if the player was able to find the green collectable hidden in each level. 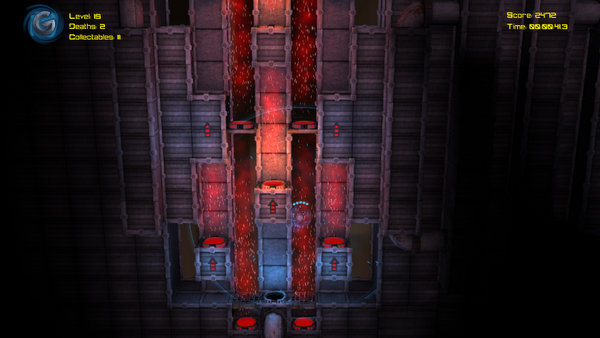 Gravi’s controls are good for the most parts. Gravi’s sling shot has a limited range and fires in an arc, similar to a grenade launcher. The launcher is accurate, but still requires a great deal of player skill to perfectly slingshot through small spaces lined with spikes. Gravi’s gameplay leans heavily on the game’s physics engine. It is possible to nudge Gravi in a direction while he is falling or airborne, but it takes a high level of skill to land Gravi accurately. The movement behaves as expected until Gravi hits the ground. The player can move backwards and forwards, but it feels more like pushing the ball back and forth with a certain level of uncontrollability as Gravi will continue in the direction for a short time after the player lets go of the movement key. Considering the tight spaces Gravi operates in, this inevitably leads to a lot of unnecessary and frustrating deaths as Gravi accidentally rolls over spikes and other dangers. 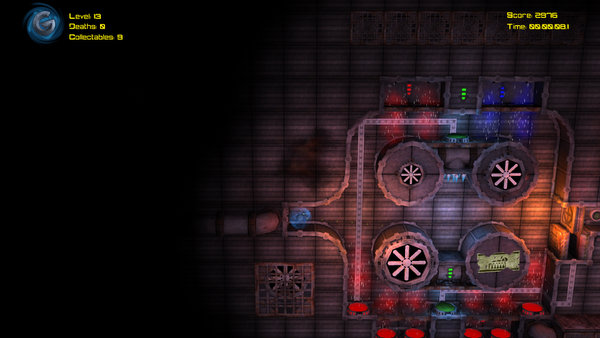 Hashbang Games advertises Gravi as a test of player’s tolerance for pain, and they aren’t joking. The difficulty level in Gravi ranges from challenging enough to be interesting to hair pulling levels of difficulty. The green collectable found in every level further raises the difficulty to sometimes fiendish levels. Gravi is sure to challenge the most experienced gamer. The level designs are excellent, although there are definitely parts of the game where trying to guide Gravi through an obstacle is as difficult as threading a camel through an eye of a needle. As frustratingly difficult as some of the puzzles are, there is a masochistic satisfaction when player’s manage to perfectly slingshot Gravi through a difficult passage and finally hit the next checkpoint.

A small change I would like to see added in a future patch is a short explanation during the first boss fight against Anti Gravi. Upon encountering him for the first time, I was completely bewildered and rather confused on what I was supposed to do. It took several deaths before I realized I was supposed to dodge Anti Gravi and move on to the end of the level.

Gravi’s 3d graphics is solid, but unfortunately will not blow any socks off either. The colour palette is a bit limited as the levels are grey with some tint based on the chapter. A variety of pipes and fans do provide a little bit of variety in the unused areas of the screen. Traps and other important details in the level are visually distinct compared to the rest of the level, allowing for easy and quick identification for speed runs. The menus are a little ugly, but since they are rarely used, it does not detract too much from the game. Gravi allows players to tweak the resolution, choose between four graphic quality levels, and choose between windowed and full screen mode. 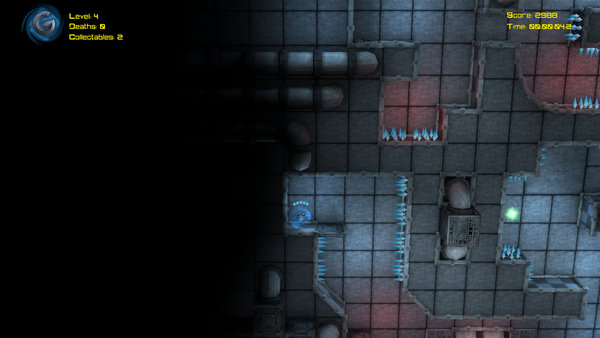 Gravi has a seven track electronic soundtrack that is set to a pulsing machine sound that makes Gravi’s claustrophobic levels feel like an active factory. I thoroughly enjoyed the soundtrack. The tracks transitioned into one another smoothly. The game is a little light on sound effects, as the sound effects seem limited to the menu sounds and the sounds of the traps.

Gravi is an excellent debut from Hashbang Games. It is a fiendishly difficult puzzle platformer that will test the agility of gamer’s fingers. The game sports an excellent soundtrack and really interesting level design. The controls are excellent for the most part and the graphics are solid. At $9.99, is a solid purchase for those who love platformers or action based puzzle games.