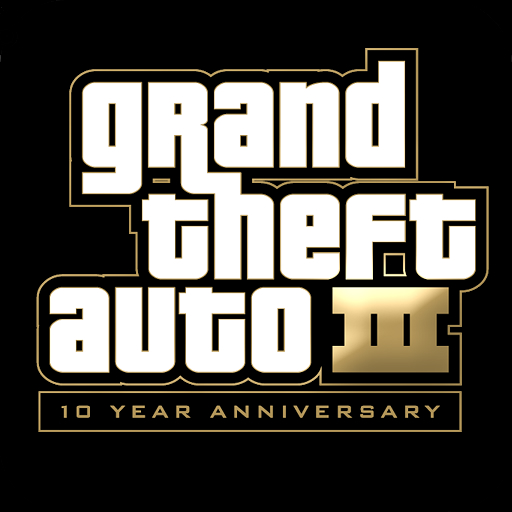 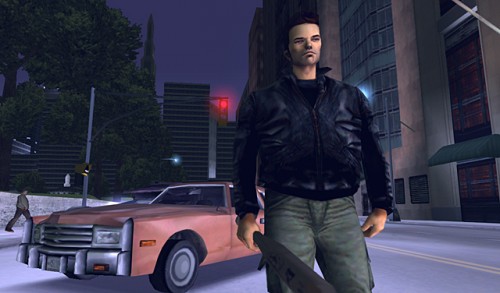 For those of you who haven’t played Grand Theft Auto III or aren’t familiar with its story, it’s a basic premise for which the action (the bulk of the game) to take place in. After being betrayed by your girlfriend Catalina after a bank robbery, left for dead and captured by the police. The mute protagonist aka ‘the GTA 3 guy’/Claude escapes from police custody after a dramatic bomb blast in the game’s opening  to climb the ranks of the criminal underworld in Liberty City.

It has its fair share of wacky characters, memorable moments and plot twists but overall Grand Theft Auto 3’s story isn’t exactly a stand out, but it’s still enjoyable and surprising that it holds up even after ten years. 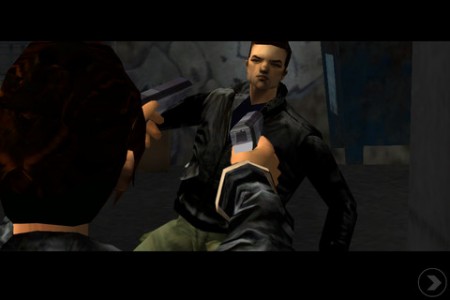 The burning question for many gamers (myself included) is how exactly would you play control an open world game on a touch screen? The port over from consoles to mobile plays out quite well. Whilst at first you may be swamped by all the on-screen buttons, you’ll get used to their location and functionality. Their size and location can be adjusted to suit player preference if you really need to. 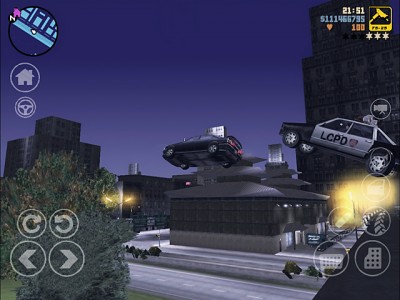 A few sacrifices had to be made in this port to fit the touch screen format, and a few issues do plague the game. For starters, you can’t aim or control the camera exactly at all in this game as there is no secondary analogy stick. Shooting is taken over by auto-aim which works just fine, provided that enemies are a fair distance away from you where you can pick them off one by one. In a crowded group situation, it is a completely different story as it’s quite difficult to select your target and the issue is exacerbated further closer up when you are completely surrounded by enemies.

Looking beyond this, the game is still Grand Theft Auto III and you are an entire city to explore in. The city itself is split into three islands which are unlocked as you progress through the story. Reaching that final island is quite an achievement and driving from one side of the city to the other is a genuine reward once you have unlocked them. 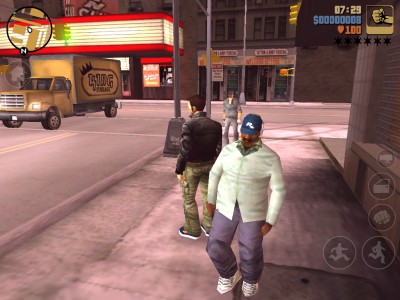 Grand Theft Auto III: 10th Anniversary Edition also introduces an auto save feature and other significant changes to gameplay, whereby if you die or get arrested you will not lose all your weapons and after failing a mission there is the option to instantly replay it and try again. If you’ve played Grand Theft Auto III before, then you know how much of a welcome relief these new feature are.

They take the tediousness out of playing Grand Theft Auto and put you straight back into the action. As before, you would have to buy all your weapons back if you died or got arrested and you would have to drive all the way to the mission’s start point to retry it if you failed. These are all significant change to the game which allows for on the go portability, which the majority of gamers will be doing when the play this game on their mobiles. 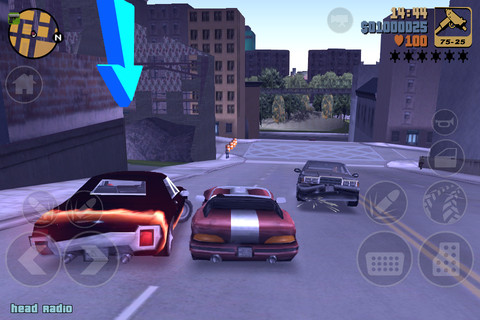 The game doesn’t look terrible keeping in mind that this is a ten year old game. This is a straight up port of the original game and no massive changes to the overall visuals have been done. That’s fine as the game retains its classic look and feel. However, you just can’t help notice the somewhat goofy and stiff looking character models in the cut scenes. There also is noticeable pop-in playing through the game. But again, for a game that is ten years old it’s still very solid. There is an entire city to explore, with each island take its own unique visual look and feel.

If there is one thing you need to know, the radio in this game is superb and as convincing and funny as it was ten years ago when I first played the game. Both the radio and soundtrack really does sell this game, and adds a layer of realism that you don’t usually in many games. Voice acting is top notch as well, although as I mentioned before cutscenes do look a bit goofy with the dated visuals. In game sound effects work and sound fine. As a ten year old game, it can be forgiven for having somewhat repetitive driving and firing sounds.

There is much to be enjoyed in this nostalgia filled epic, revisiting Liberty City and all its crazy shenanigans. It’s unfortunate that there are just some issues that distract players from the overall experience. And while you can look past these, as the fact of the matter is you’re playing Grand Theft Auto III, originally a PS2 game, in palm of your hands. And for that, I suppose the game can be forgiven for having a few issues.