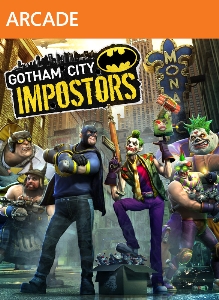 Overview
Once again The Cape Crusader receives attention in the spotlight, but we aren’t prepared for this rendition. Gotham City Impostors puts everyday people with limited expenses into a heroic Batman suit or villainous Joker outfit. With a small budget our impostors can only afford guns and home-brewed gadgets to unleash devastation on each other. 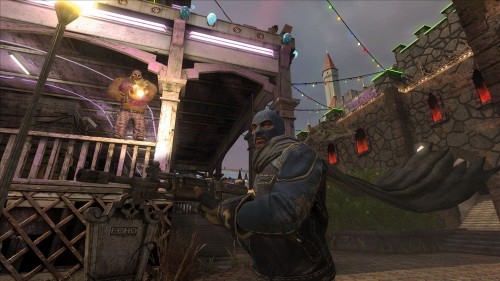 Watching the original animated Batman series provided the morality necessary for me to forgive my rivals for any wrongdoings. However, you are not Batman in this game – morality can be thrown out the window. So my initial thought going into the game was: “Batman with a gun? Yeah, I can roll with that!”

Gameplay
Beginning the journey as an impostor starts off with a tutorial of how to use weapons as well as unique gadgets. Any gamer that has played a first person shooter will be easily accustomed to the basic movement and aiming controls. Most weapons can be fired automatically by pressing the right trigger while others may require a timed shot. The Freezer is one such weapon that depends on how long it is charged. Charging this weapon provides a higher chance to freeze a target solid.

After the weapons section, players encounter the next round of training involving home-brewed gadgetry. Glider rigs, roller skates, grapple guns, and jumping springs are among the few items at an impostor’s disposal. Each gadget is tested, so players can identify what gadgets will fit their build of character. After testing the mobility items, you get to test out support items like pipe bombs. Did I mention this game is not rated E? 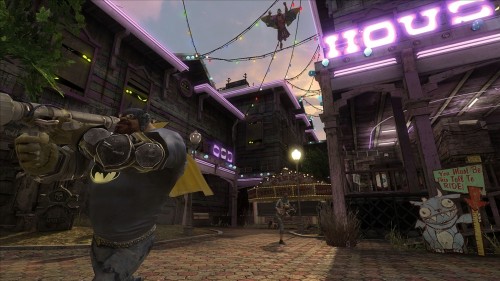 Developing your secret identity is no small task. A player may carry with them a readied weapon, back-up weapon, support item, and gadget item to use in gameplay. Presented with weapons like rifles, light machine guns, and heavy weapons, it may be tough to choose what weapon suits you. Interesting enough all weapons are locked and can only be unlocked by a gaining a weapon unlock through leveling. Use the weapon unlocks wisely as they are not offered frequently. Choosing the wrong weapon will not be entirely detrimental because default identities are available to use at every death screen – “press (Y) to choose new loadout”. Leveling up will also allow for creating separate loadouts which hold multiple custom identities not unlike weapon loadouts for Modern Warfare 3.

In part of identifying yourself, you will eventually be able to unlock character builds that will determine the following attributes: health, speed, and melee. A speedy character will have a high speed attribute while having low health and melee, but a mighty build will focus on melee and health while movement is very sluggish. A speedy sniper may not be a practical choice if you’re planning on making a camp. 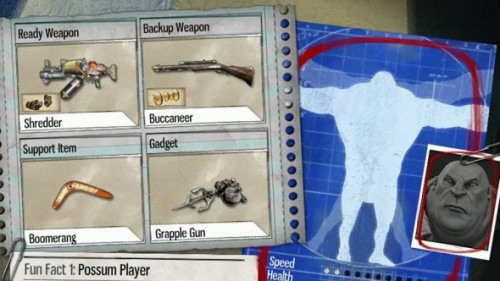 Additional to weapons and gadgets, players can unlock perks to help them passively in combat. Listed as Fun Fact #1 and Fun Fact #2, two passives can be chosen and be used at all times. A great combination of perks could be used to create the ultimate tank machine. By choosing the mighty build, we will be concentrating on health and melee damage. Adding Fun Fact #1 “Horse Healthy” will provide extra base health, and choosing Fun Fact #2 “Bulletproof” will reduce damage from bullets. All together this secret identity will be hard to bring down and can serve as a target for enemy confrontations.

Not holding much variety in game types, this particular game is also not bolstering the same population as Modern Warfare 3. However, there are three different online modes (Team Deathmatch, Fumigation, Psych Warfare) as well as a single player challenge mode. Team Deathmatch is by far the most popular mode by offering a simple mission to kill the enemy Bats or Jokerz. In Fumigation you are directed to capture certain locations on a map that emit toxic fumes. By controlling a majority of fume boxes, your team will begin to emit deadly fumes that will set out to kill all opponents. Psych Warfare works more like “capture the flag”. Players will be instructed to capture a battery and insert it into a propaganda machine. If left unattended, the opposing team will run around with arms flailing crazy for easy pickings. Don’t let the arms fool you though; they can still kill you. 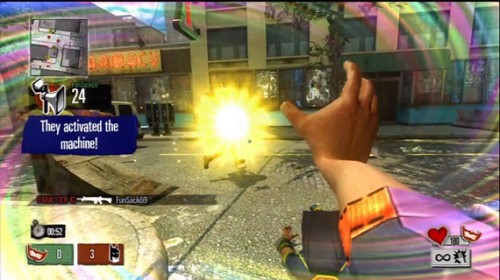 Challenge mode offers a series of tests through the five available maps. With three sections for each map, the tests are separated in to categories of beginner, intermediate, and expert. Concentrating on mobility around the map using gadgets, challenge mode will actually help you familiarize with the maps. Identifying vents and mini trampolines is essential for gliding as well as finding ramps for roller skates. Both can be useful in avoiding and reaching enemy targets quickly. You may even gain experience by completing challenges in a timely manner.

Most Xbox Live Arcade titles do not require players to stay online to play the game. Gotham City Impostors does require a player to stay online even at the main menu. If you planned on knocking down a few challenge missions while offline, it is not possible. Seeing how it is strictly a multiplayer title, this aspect is acceptable.

As with most online matchmaking formats, connectivity becomes a major issue for gameplay. Having a poor connection will not offer a palatable experience. I was able to test the game in a fast internet setting as well as a shared connection. I went from enjoying the game will little interruption to a glitchy mess – as to be expected. If you are not confident in your internet connection, you shouldn’t have purchased a FPS game in the first place.

Visual
Environments and characters emphasize the craziness of that is Gotham City Impostors. Bats and Jokerz alike running around in cloth-less costumes with garbage can shields should emanate more than just interesting comments. With visual customizations being purchasable commodity, players can gain points to spend by battling or simply buy suits with Microsoft Points. The more interesting costumes can be extremely revealing but also cost the most. Wearing only underwear may cost you upwards of 3,000 in-game credits. I suppose being killed by a near naked impostor would be somewhat detrimental to your existing FPS gaming pride. 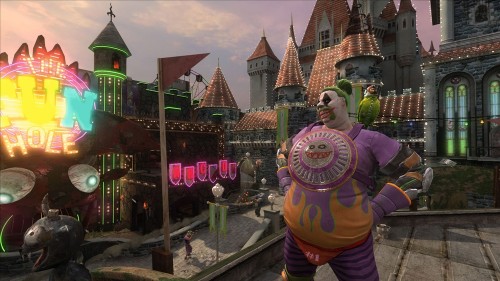 One of the more interesting places to do battle, a carnival is host to a clown themed amusement park. Offering plenty of nooks and crannies to hide behind, the map projects itself as a madhouse for slaughter. Grappling guns provide further discomfort from ground dwelling shooters as plenty of buildings add a canopy above to shoot at prey below. I do not hold much love for clowns, so don’t be surprised when you see a Batman impostor shooting random clown objects.

Audio
One of the small annoyances of the game is the countdown timer during the challenge missions. While it is completely important to have such a device, replaying missions less than a minute in length becomes slightly tiresome. Sound effects can be turned off, but let’s not ruin the rest of the game just for a meaningful buzzer. Additionally, the buzzer sounds off at each medal placing letting players know what medal they can potentially gain during that round. No buzzes means a gold medal packed with some nice experience points.

Background music is oddly motivational capturing the building dynamics found in well-known Batman scores. I mostly noticed this sensation during my free-roaming experience in the solo challenge arenas. As I was gliding around discovering vantage points to gain a gold medal, I couldn’t help but feel empowered by the music. I felt like I was truly imitating my childhood hero – I AM BATMAN!

While the music can be heard clearly in challenge modes, Team Deathmatch drains out any background noise and in its place is a slew of gunfire. Sound effects reign supreme during online play and take priority as action surrounds your character. Effects in some instances will provide a warning that an object will be coming your way or present a package obvious death. Sorry, there is hardly any reaction time when an opponent throws an impact grenade at your position.

Overall
Using a grappling hook to narrow the space between two opponents is a rarity in first person shooters. As a completely innovation Batman title, the game clearly provides an exciting factor that is even new to DC fans. While the content is not overly extensive, the customization of characters has a long lasting impression. 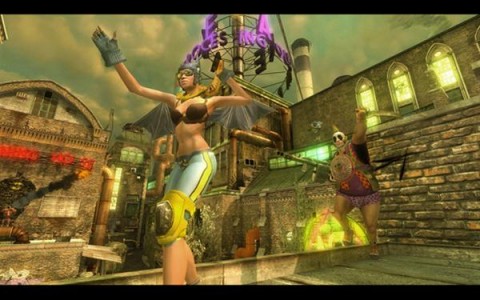 Gotham City Impostors provides a multiplayer shooter experience with several sides of crazy. Never has there been a game where people could play dress-up as Batman or The Joker and deliver as much damage as this game dishes out. Being one of the only games a player can run around in a speedo with roller skates, this might just be the next game for you.