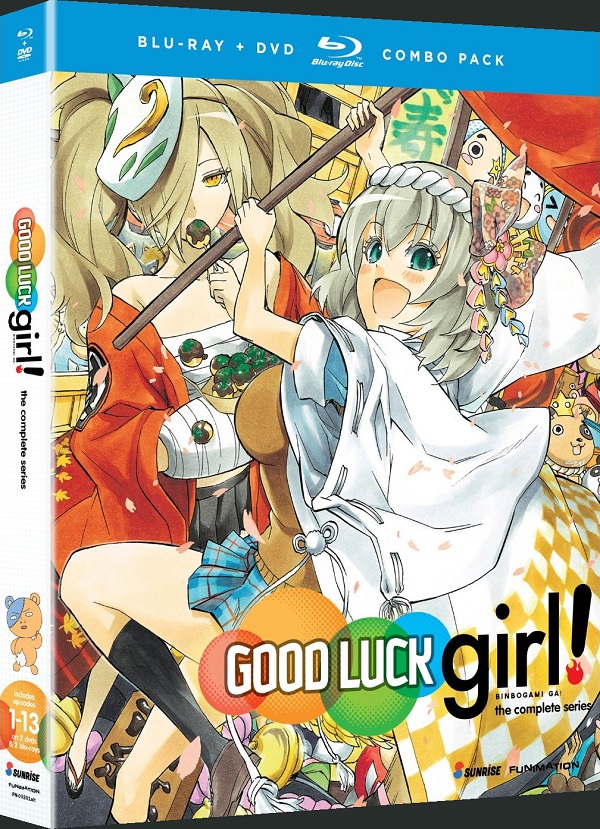 Overview
When something released in Japan is brought over to the West, often the name of the product is kept the same in both regions. If this is too much of an issue, usually the English equivalent of the title is used. Of course there are other times where the title is changed completely and in the case of Binbogami ga!, it isn’t for the better. Disregarding the disappointing name, now that Binbogami ga! has been brought to North America under its new name Good Luck Girl!, is it worth picking up?

Story
Ichiko Sakura appears to have everything going her way. She is beautiful, popular with all of the boys in school, intelligent, and boasts one hell of a body. However they say beauty only runs skin deep and in the case of Ichiko, under that skin is one venomous personality. She is often pleased that all of the girls in school happen to hate her and that the only person she cares about happens to be her butler Suwano. 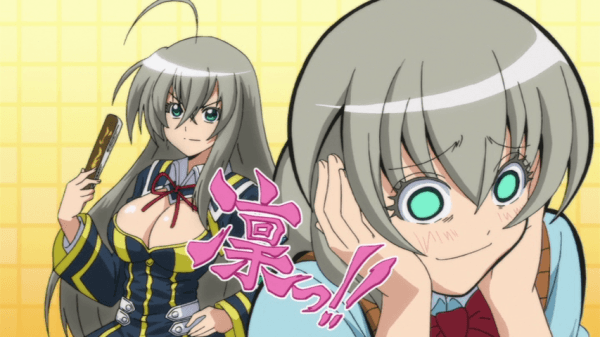 There comes a limit to everyone’s luck, but with a person like Ichiko always having things go her way, even the gods begin to take notice. You see, not only does Ichiko have such an abundance of ‘Happiness Energy’ she actually unwittingly saps the happiness energy away from everyone around her, bringing disaster to those close to her.

As such, in the realm of the gods, a god of poverty named Momiji is tasked with finding Ichiko, removing her abundance of energy, put a stop to her energy sapping ways, and restore balance to the area around her. Therein lies the overarching premise of the story but this is not an anime where the plot plays a pivotal role in progression, instead Good Luck Girl! is character driven anime and one that is as hilarious as it is random. 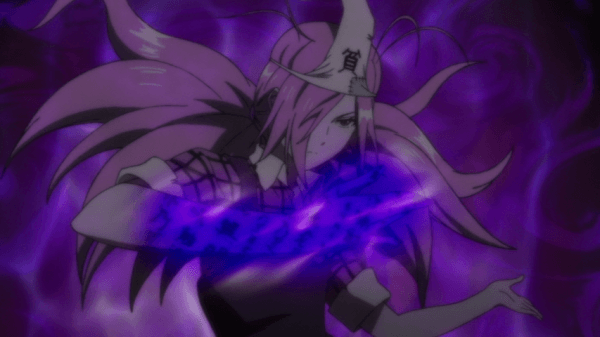 After watching enough anime, there comes a point in time where viewers have seen so many different stories that it is easy to predict what will happen or what character will be doing what in each episode. However Good Luck Girl! manages to throw one curveball after another at the viewer thanks to the fact that Momiji has a never ending array of tools at her disposal while Ichiko can take advantage of her own good luck and incredible energy to thwart Momiji’s efforts.

It also helps that the two characters work so well together it makes every exchange between the two very enjoyable to watch. Their stark contrast in personality and the randomness of the anime make it so that the viewer never truly knows what to expect. Compound this with the fact that there are so many references to various anime, both in through costumes, art style changes, and dialogue and Good Luck Girl! is a series that veteran anime fans will be testing themselves with to see if they can catch every reference. 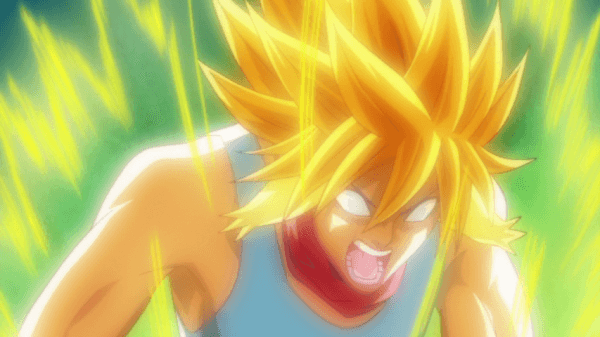 Outside of the comedy factor, there is some heart to Good Luck Girl! as well as character development for Ichiko. While Momiji stays the same and her mission to take down Ichiko is the key part of the series, Ichiko is clearly the star of this show. While she may begin the series as a snob who looks down on everyone around her, viewers learn about her damaged past, and she slowly begins to change as she starts to care for others and learns that it is alright to care about others.

That being said, while Ichiko and Momiji are the key characters in the series, the supporting cast is absolutely hilarious and helps add a lot of humor to the series, especially when you consider that the cast includes the likes of a masochistic dog god, a girl raised as a boy who loves to fight, a perverted monk, a hardworking and always sleeping classmate, a cat god, and even a photobombing character that only shows up during the last few seconds of each episode. 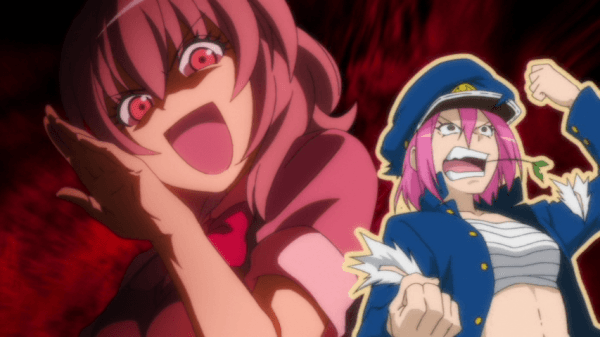 While it has its fair share of drama, especially whenever Ichiko realizes that the new people she is growing closer to are in danger because of her, the series is often light-hearted and everything from violence to clichés are used to get laughs out of the viewer. Still, thanks to a number of small story arcs throughout the series and a great closing arc that sees Ichiko acknowledge and accept her life, Good Luck Girl! ends on a great note.

Visuals
There is something that can be said for having proper colorization to fit an anime theme. For dramatic series softer, darker tones are best suited and in the case of Good Luck Girl! the bright and vivid colors used throughout the anime are a perfect fit. Thanks to the randomness of the anime and the series’ habit of altering the art style to mimic series that are being referenced, or morphing the characters into chibi-style for the sake of comedy, Sunrise has done an excellent job making sure the series looks great. 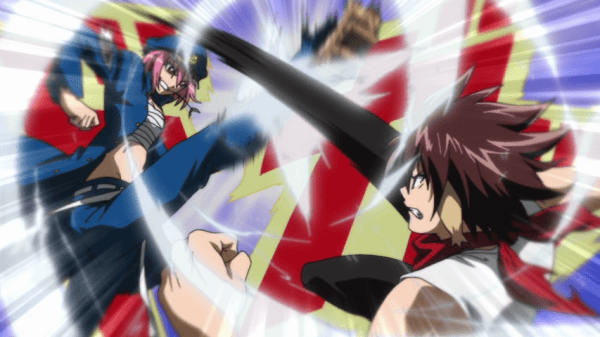 It also helps that the character designs are fairly impressive and varied from character to character with a number of different outfits for each of the characters in the series, especially Momiji who undergoes a number of costume changes throughout the series. It is also worth noting that whenever there is action in the series, it is nicely animated though it feels like some instances were sadly cut short for comedies sake, whereas extending them a bit may have added more to the show.

Audio
With the release of Good Luck Girl! in North America, FUNimation has included both their new English dub as well as the original Japanese voice track. The English voice actors do a great job bringing the characters to life and the interchange between Ichiko, voiced by Brina Palencia, and Momiji, voiced by Colleen Clinkenbeard, still sound great in the English version of the show as the two show great chemistry when working together. 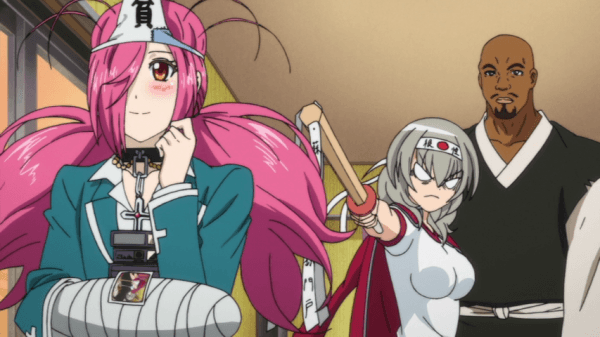 As far as background music is concerned, the soundtrack is a bit forgetful but does have a share of nice dramatic pieces that work well whenever Ichiko is forced to make a decision. While the opening and ending themes for some anime can be easy to skip past, I highly recommend listening to both themes in Good Luck Girl! as the opening “Make My Day!” by Piko and “Love Riot” by Happy Birthday are both excellent songs that are accompanied by some great animation.

Extras
Good Luck Girl! comes with a number of bonus features, though many of them are run of the mill for a release such as this. There is the textless opening and ending themes, with the second ending theme featuring the second half of the opening song, US trailer, trailers for other FUNimation releases as well as two commentary tracks. The special addition in this release however is a video commentary for episode 8.

The video commentary features Joel McDonald, the director of the English dub, Brina Palencia, Colleen Clinkenbeard, and Marth Harms who handles the voice of Ranmaru. This is a nice touch to include in the release and it mostly features the cast discussing their characters and how they liked handling each one. 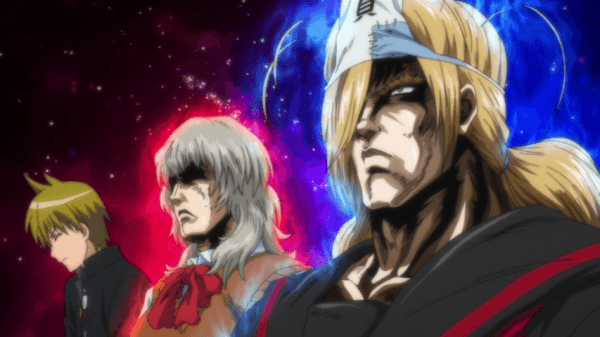 The standard commentary tracks are for episode 4 and 12 and this time around they have been spiced up with a new theme. Both commentary tracks feature questions from fans of the series, which are either read off by the fans or by characters from past FUNimation series, meaning there is a question asked by Vegeta from Dragon Ball Z in here, fitting considering the amount of references in the series. The commentary for episode 4 features Todd Haberkorn who handles the voice of Momo’o and Brina Palencia again while episode 12’s commentary features Colleen Clinkenbeard and Martha Harms.

Overall
Good Luck Girl! may have been given a ridiculous name in the West, but its name change doesn’t damage the actual content of the show in the slightest. While it is almost always light-hearted and rather simple at times, the random and off-the-wall nature of the show that keeps viewers on their toes while they are also laughing continuously makes Good Luck Girl! a series that shouldn’t be passed up.