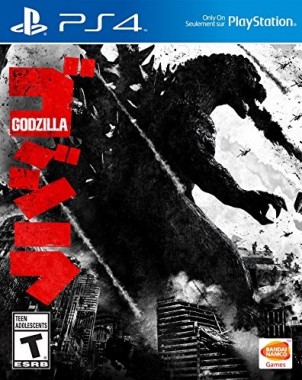 Overview
There are very few franchises that have had the longevity and wealth of Godzilla. Just saying the name for some brings heavy nostalgia with it – with many fans torn over several of the ups and downs of the king of the monsters. There have been over twenty video game adaptations of Godzilla, but none have came with more promise than the self titled project from Natsume Atari. With plenty of references, history, and kaiju, this title certainly could have stood on its two legs tall – so what is the final result? Let’s find out. 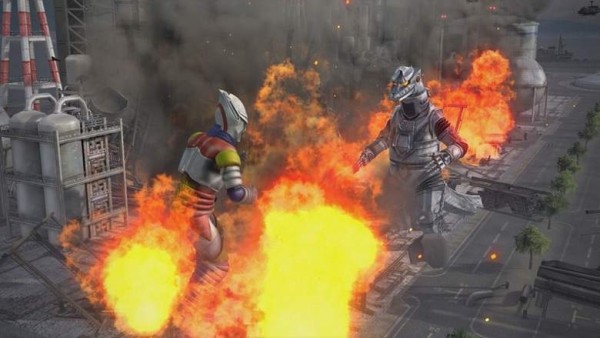 Gameplay
There really is not a lot of story in Godzilla. I mean, sure – the main mode (Destruction Mode) has a story to hold it together of Godzilla coming in and wrecking generators – but honestly – that is about all we as they consumer get in terms of narrative. Godzilla is headed into land and has a ton of opposition in Destruction Mode, and the player must cause as much destruction as possible while eliminating all of the generators in a stage. Its as simple as that, aside from the battles with kaiju that liven up the experience and introduce a new objective from time to time. Before I dive deeper into this mode though, you should know just how Godzilla controls as that is truly going to be the make or break of anyone’s purchase. 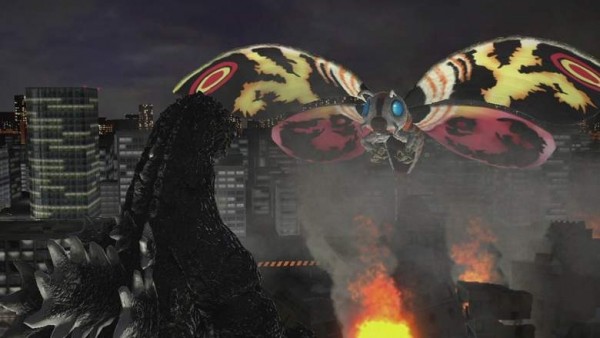 Let me make this crystal clear. Godzilla is a simulation game. Not arcade, not fighting, not action – a simulation. You play as the beast himself and much like the cinematic films, Godzilla is slow and powerful. You also have a limited movepool as well, with a charge attack, a quick melee of sorts that translates into a tail attack combo, and the big tail slap. Godzilla can also grapple – but its a bit hard to execute because you have to be right up on the object in order to grab it, with the end result show the big monster pushing on the said target until it crumbles or he tires out. You also have fire breath, so once your meter is charged you can let out a quick burst of the projectile to hit foes from a distance. It doesn’t sound like a simulation in words, but once you are playing the game, this method of control actually makes sense. Players move Godzilla with the analog, and use the face buttons for attacks. Things get weird when you have to learn how to turn with the top two shoulder buttons. Let me tell you this is a big thing that will take time to get used to, but it does make players feel as large as the beast they are controlling and I seemed to adjust after a couple of hours worth of play, so just know that you are going into something that is not your average Godzilla fare. 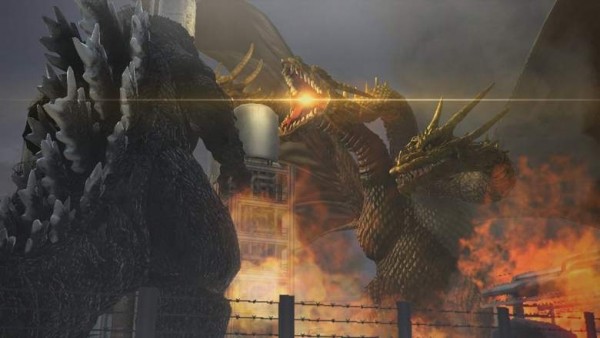 Back to Destruction Mode, despite the lack of story and the whole generator thing, this little mode is actually rather interesting. As you destroy buildings and generators, you grow bigger. The bigger you are, the easier it is to knock things out of your way. At the start of each branching stage, a leader will make a quick statement of his battle plan against you, and its your job to simply avoid the arsenal and push through to each objective. As stages are beaten, leadership changes with pride of these leaders being destroyed along with all of those generators. Sure, its a small touch – but it does make it feel as if you are progressively being more destructive overall. Moving to another mode, King of the Monsters is as it is titled, and lets players battle through foes that build on difficulty. Evolution mode is interesting enough as you can actually learn new abilities – but don’t get too excited as most are simply just taunts. Diorama mode is mainly for the fans, and provides unlockable fauna to take screengrabs with. Finally, the Playstation 4 exclusive monster mode allows you to battle with others online (if you can find an opponent) using a good deal of kaiju. 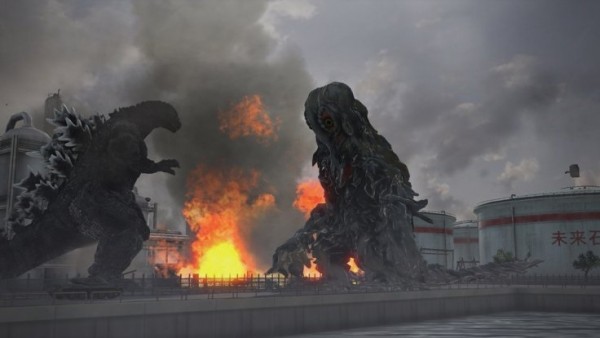 With so many modes you would think one would be content – but honestly I felt like this was once a full experience broken down into parts to make it seem like there was more to offer. Destruction Mode is fun, but feels like a side mode. Thankfully the films are represented very well with a ton of touches that capture the raw essence of the Godzilla namesake, but in an age of access and action, I do wonder why this title wasn’t developed with a wider audience in mind. Sure, I get it, but 90% of gamers out there won’t understand that this isn’t RAMPAGE or some title where you just run wild with a monster and blow stuff up. Godzilla doesn’t have many problems in terms of how it is built, its just lackluster overall because it offers no mode to satisfy a bigger base and feels a bit like a budget title.

Visuals
This is hard as I played the Playstation 4 version and did not mind the visuals, but if you were to tell me I was playing the game on prior gen hardware, I would definitely find that to be more believable. The models look fine, the animations are a bit stiff – but so were those old films so I kind of can’t knock that as I didn’t notice framerate drops and such. Various filters can also be unlocked to add grain and other classic effects to the game. Again, a minor addition that goes far in terms of atmosphere. Godzilla’s only true visual flaw are the camera angles that will completely jar the immersion with your experience as the camera gets behind a building or simply doesn’t turn at the same rate as Godzilla. 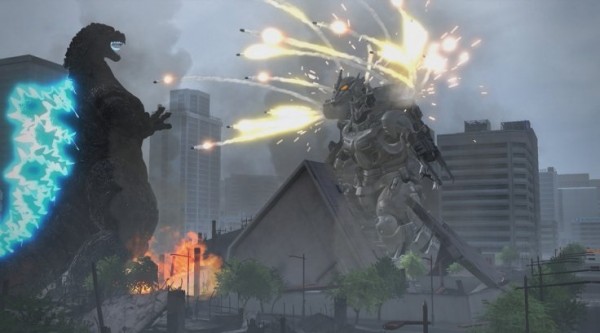 Audio
The music is something I feel will go unnoticed but fans of the franchise will quickly hear the familiar soundtracks to nearly every single film within this game. The sound effects are also well done – with Godzilla’s shrieking roar sounding great. The voice actors in the English version seem forced, bored, and tired most of the time. Luckily, you can switch to Japanese audio – as even though the dialogue is usually uninteresting, it will make it seem more true to the original product we have all seen from the movies. There are also little audio files that give reactions to the public and police down below as you terrorize to fine, and those too do well to add another layer (though I wish they would just play and not require a game of hide and seek).

Overall
Godzilla is either going to be a great game or a terrible one depending on who you are and what you want from a title featuring Godzilla. Do you want action, explosions, destruction, and references to American culture? Well, look elsewhere. If you want to geek out in a playable and somewhat decent sim of Godzilla with plenty of lore to look through as well as kaiju to fight, this is your fan service from Namco and I personally think really hardcore fans will both understand and appreciate this game’s existence. That said, the game is a bit too expensive for what it has to offer at launch, so you might wait for it to go to a budget price before stomping a town as the most beloved monster in cinematic history.