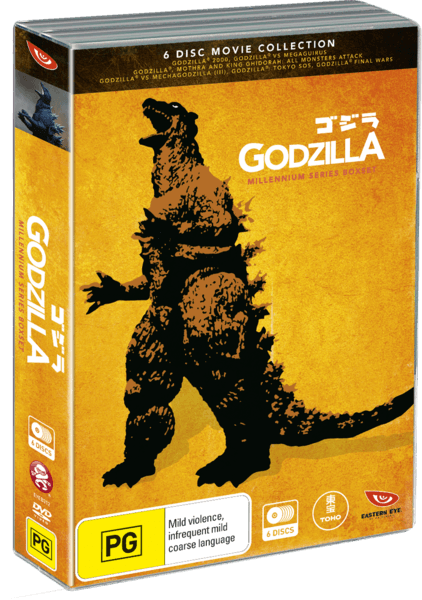 Godzilla will be a timeless icon for both cinema and the anti-nuclear movement. Few blockbusters strike that balance between being special effects bonanzas and having a thematic thread that actually has something to say. Godzilla as a cinema franchise has gone through 3 phases; the Showa series (1954-1975), the Heisei series (1984-1995) and the Millennium Series (1999-2004). This boxset includes every film in the Millennium series, each one packed with more monsters than the last. It should be noted that the Millennium series does away with all the previous lore excepting the very first Godzilla film, which remains the origin tale in this version of events. 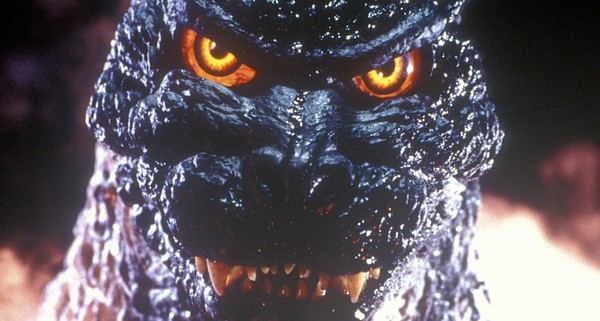 Despite being a series, only Tokyo S.O.S. and Godzilla against Mechagodzilla are directly related. Having said that, there’s a meta-structure to the way each film is crafted. Godzilla is never vanquished, instead at the end of each film Godzilla casts judgement on the human players and goes back to the ocean. Not only does this stay true to the themes in the series, it also allows for Godzilla to return any time someone wants to make a new movie. At the end of the first film, there’s this great line where they basically explain the whole judgement thing then immediately look back at Godzilla destroying a whole city block. Clearly 90 percent of all humans are judged unworthy of Godzilla, because these films are an endless stream of carnage.

Godzilla’s relationship with humanity is a complex one. While Godzilla judges the many, he puts his body on the line against giant, other worldly monsters for the few. Usually those few consist of a journalist, a scientist and then a myriad of politicians and military personel. Journalists function as a way to involve a lay person character who can relate to the audience, while scientists usually represent the tension between using knowledge for good or evil. One scientist will always be a becon of hope, demonstrating that technology can be emancipatory. Godzilla acts as the counter balance to this theme; the misuse of nuclear technology placed the people of Japan under Godzilla’s vigilant watch. Now he keeps humanity’s hubris in check. Any time they get ahead of themselves messing with nature Godzilla will intervene. 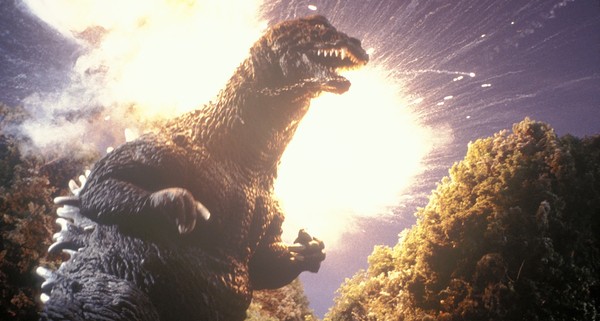 The Monsters themselves also serve a specific function in the lore of the Millennium Series. Except for Final Wars, where aliens make Godzilla bash monsters in different cities and that’s about it. On the plus side, the Opera House gets dominated. In the other films, the mosters all have agendas which are all spelled out by the human protagonists. Mothra has a generational conflict with Godzilla. Her shobijin ciphers remain from the previous iterations of the  franchise. These are two really tiny women who are telepathically connected to Mothra, relaying Mothra’s intentions. After all these decades, their kookiness still translates well to screen. Other monsters are more obvious allegories, such as Mechagodzilla, which pretty directly confronts the dangers of genetic engineering when the cybernetic A.I. is taken over by the genetic code of the animal used to create the monster.

At face value, each film is an entertaining roller coaster. They all work as independent popcorn blockbusters, especially since most films in this series are considered direct sequels to the original and unaffiliated with any other film in the franchise. On top of being entertaining, each film has a digestible message within it you can latch on to. None of the morals are too out there, mostly it’s about peace and prosperity through morality and technology. Considering Godzilla originated as an anti-nuclear power morality tale, the new themes that are being incorporated stem from environmental social movements. Godzilla manages to stay contemporary by updating its theme to current concerns through its villains and the machinations of the human players. 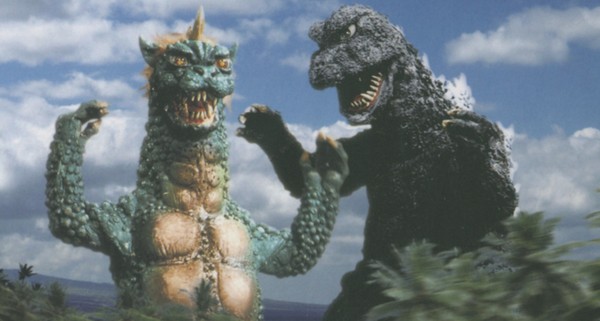 Give me dudes in suits over CGI any day. As a kaiju (monster) film, there is a distinct aesthetic lineage the Millennium Series pays homage too. While there is some CGI, the art directors have relished in the classic Godzilla technique of using model cities and prosthetics to capture Godzilla’s epic battles in urban Japan. In fact, there’s an awesome battle where Godzilla fights a CGI kaiju who looks identical to the American Godzilla. Of course, the puppet Godzilla wins – who knows what the director was trying to say with that battle? Sticking with the physical prop aesthetic was the only choice to go for, and each director takes the style as far as they can.

Godzilla does lose his green tint half way through the series, which may be sacrilege for die hard fans of the original two periods of Godzilla films. Otherwise, it’s those fans who this series really panders to. The obvious staging is a part of the aesthetic that defines Godzilla. It’s applied artfully in each film, there’s always tension in the action sequences despite being able to tell it’s fake. The corniness extends beyond the kaiju. Army tanks, jet fighters and experimental weapons all look like they’ve been made out of kitchen appliances taped together and that’s awesome. Approaching each prop like this creates a consistent aesthetic which unifies the series. 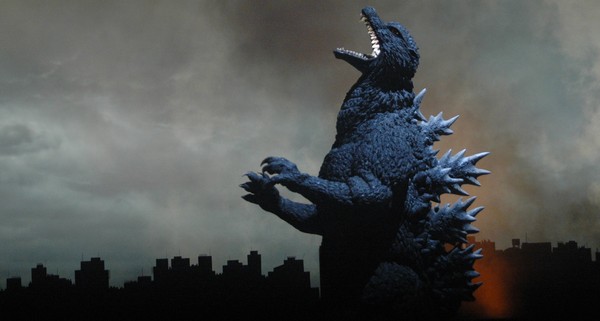 All the classic sounds that made the Godzilla universe famous reappear in the Millennium series. Godzilla’s theme has as much impact today as it did in the fifties. Vibrato, bass heavy baritones deliver the theme in a way that induces fear into the viewer before each conflict. Godzilla’s iconic scream has been left in tact, if it had been replaced there would have been rioting in the streets. Despite holding onto these classic facets of of the Godzilla franchise, room have been left for new technology to lift the sound track. These elements are usually pushed to the back of the soundtrack to fill out the world. Again, Final Wars is an anomaly here. While it’s a welcome relief, beware that it’s a radical tonal shift for the franchise.

Unfortunately, the extras are mostly ignorable here. I’ve never understood the appeal of watching the trailer for the exact movie you just watched. Other than the trailers there are a few extra special features, like photo galleries and trivia. Die hard fans will appreciate this stuff but I can’t see a wider audience getting too much out of it. All the extras are obviously extra content they had lying around that didn’t consume too much memory. That’s not a bad thing, they’ve gone out of their way to include as much content as possible. Having over 600 minutes of Godzilla rampaging doesn’t really require more content. Personally, I would have been perfectly happy if no extras were included at all. It’s not the place of a box set to be filled with trimmings, if these were stand alone films that had this few extras I’d be annoyed. As it is, more content would just have bloated the set. 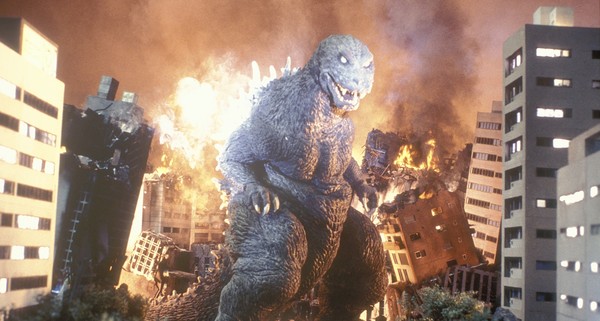 For $40 you’re getting a piece of cinema history. You can’t say you’re a fan of pop culture without having a decent slab of Godzilla on your shelf. While hardcore fans may debate these films aren’t as good as the originals, I feel like this version of Godzilla both explores the traditional themes of the franchise while modernising the story for contemporary audiences. Mostly that means that the pacing and editing is slightly faster and has more polish. Otherwise they’re faithful to the formula, providing kaiju mayhem for a new generation. Let’s be honest, this isn’t Macbeth. You’re signing up for a specific aesthetic with Godzilla. It’s an aesthetic that created an entire genre, one that’s loaded with a love of kitsch and ridiculous battles. If either of those things interest you in the slightest you must get this series.