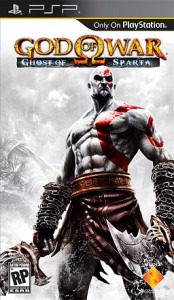 God of War: Ghost of Sparta

Red Sauce on Pasta!?? So God of war is out of the bag again after the impressive God of War III, how can they possibly up the anti? Well like any other established franchise essentially with more of the same, but Ghost of Sparta manages to deliver on all the exceptions Kratos is known for without being an obvious cash cow. You wouldn’t expect anything new, but given the loyal fanbase, the developers didn’t need to. This series has converted itself beautifully into mobile action madness and stands out as one of the top PSP titles. 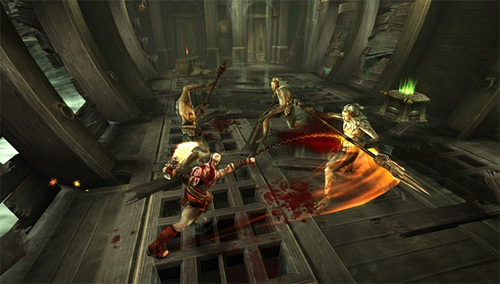 Diving into the story, the game takes place between God of War 1 and 2 and tells the story of Kratos looking for his long lost/dead brother Deimos whose been haunting him. While it’s mostly a side-quest from the events of the main trilogy, it manages to pull off some monumental moments, which might explain some of reasons the Gods lashed out against Kratos in the second game. Suffice to say the story is just an excuse for the pretty cinematic displays and a reason to move from one locale to another. Surprisingly the presentation on the PSP pulls it off extremely well, making you think this is one of the best-looking PSP games around.

If you’re a God of War fan you might love, like I did, the way Ghost of Sparta touches on the back-story of Kratos, more so than in the console iterations. In doing this, the writers have added depth to the mysterious character while servicing the fans at the same time. Kratos’ brother Deimos has a major role in the narrative and makes for an interesting side-story to the God of War world. He was briefly mentioned in previous games, and fans have been curious ever since. Ghost of Sparta does exactly what it sets out to do in terms of servicing the player’s curiosity, without giving too much away. The general conflict throughout the story is Kratos dealing with his role as the new god of war, but at the same time feels tormented by what has happened to his brother, so he goes searching into he’s past. It’s a natural conflict in the character, and doesn’t at all feel contrived, which makes for a solid-story and it’s beautifully presented. The developers set a high standard with Chains of Olympus, but Ghost of Sparta somehow manages to top that in terms of portable cinematic story telling. 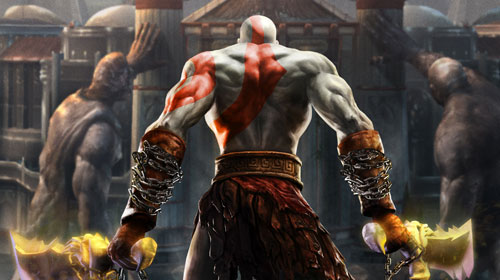 The gameplay itself hasn’t changed much from the tried-and-true formula, but just in case you haven’t cracked into God of War, here’s the breakdown.  You will wield chain blades that can be swung around at foes in a variety of devastating and epic attacks hurled towards your enemies.  Later down the track upgrades become available with fire attacks (which can penetrate armour and break walls), as well as swapping equipment entirely for a spear and shield (which provides a nice variety, but you’ll find more satisfaction coming from combos). There are some light puzzle elements, generally involving moving items from one place to another, or pushing and pulling levers to manipulate the environment.  Nothing is too difficult other than the combat, though some puzzles are quite ambiguous and will have you running between rooms thinking “WTF?!” until you figure it out. Combat is handled well on the little PSP controls, doing a great job of introducing new enemies whom at first seem impossible to beat, only to have you later taking on two at a time. The upgrades in combat really give you a sense of foreboding power and destruction, especially once you start taking on more enemies than you thought possible, and that’s what kratos is all about. Needless to say, boss battles are epic, even more so than the previous PSP entry! Detailed creatures fill your screen in mass proportion, while you attempt to climb them in awe, which eventually leads to attacking their weak points. Also the quick-time events, which God of War is infamous for, have been slightly improved in their UI design. Corresponding buttons now appear in the same position as your PSP to make life easier when timing.

The game takes you down a fairly linear path, from point A to point B, with the story pushing you along.  Camera controls are non-existent; the camera will always be in a fixed position appropriate for the area you’re in, and hardly fails to do what you need at the time.  It can be a little tricky to transition at times when the camera switches radically, but nothing overly game breaking.  The bottom line of God of War is, you run around hacking the crap out of anything that moves or looks freaky (including some things that don’t move), the satisfaction comes from the gruesome death animations. It’s reminiscent of Assassins Creed violence, but even better in it’s execution, no pun intended.

Two new magical attacks in the game are available if you’re looking for something new. They’re called the Eye of Atlantis and the Scourge of Erinys. The former is a lightning attack and isn’t overly unique, given all the lighting attacks kratos has already had. The other, however, is a much more cool ball of energy that sucks enemies into it’s gaping hole and occasionally kills in the process. The game also features one of the most ridiculous sex mini games, where alot of women get involved, but sort of makes sense cause kratos is very pimp.  In addition, load times are rather short so you won’t have to wait to see half naked ladies, with only a mid-game pause for some areas, which isn’t too bad at all. Ready at Dawn studios have really down quite well with Ghost of Sparta, improving upon Chains of Olympus to bring us the ultimate God of War experience to the PSP. 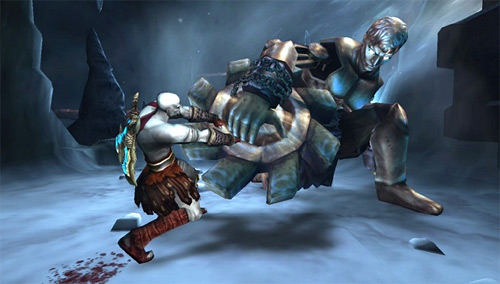 The graphics in Ghost of Sparta are some of the best you’ll see on the PSP, even matching and out shining some PS2 games. Isn’t that a fairly good indication of the eye candy involved? You won’t be disappointed. The lighting is fantastic, as well as the character models and hey, they’ve even thrown in a solid frame rate. In addition, kratos looks great and has been re-modelled allowing the character to be drenched in blood as the action happens, much like God of War III, pretty impressive eh? Also the environments are fairly detailed with nice weather systems featuring rain, cascading water and lava, making for immersive backdrops bringing the world to life. Graphics aren’t everything obviously, but they can make a good game greater, and this is in effect with Ghost of Sparta.

The audio comes with the dramatic score expected from a series based around Gods, the voice-casting has all the regulars on board and it all blends together nicely to complement the story, they’re fairly well acted. But to be fair, I own rather awesome headphones and everything was crystal clear. The PSP speaker can only do so much, but what you’ll hear is effective enough, however it’s recommended to use headphones. Perhaps the only thing missing is some heavy metal, because I know when I think metal, I think Kratos… (He really does have some rage issues) 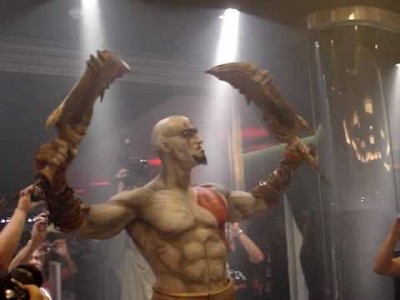 If you’re a God of War fan, which I don’t see why wouldn’t be, this is definitely for you. Other than general improvements across game-play, graphics and story telling, you won’t find anything new here. But it’s a fine achievement by developer Ready at Dawn studios for surpassing the already impressive Chains of Olympus, you can’t really ask for much more from a PSP game. This is my favourite God of War game just because of the story alone; it’s definitely an entertaining insight to the back-story of Kratos, and why he’s just so damn angry. The only issues I can note in Ghost of Sparta are lack of multiplayer, the puzzles are a little easy and the camera whilst almost perfect, does have a few niggles.

Overall the PSP hardware may be 6 years old, but it’s games like this that keep it relevant and give players a real reason to pick it up again. RED SAUCE ON PASSSTAA!! 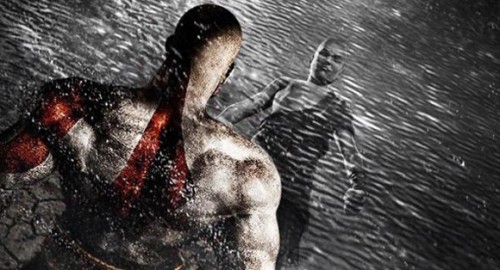 I give God of War: Ghost of Sparta: