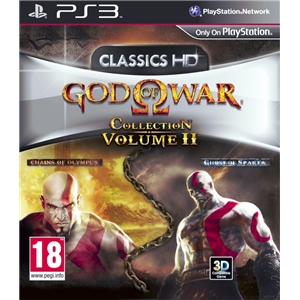 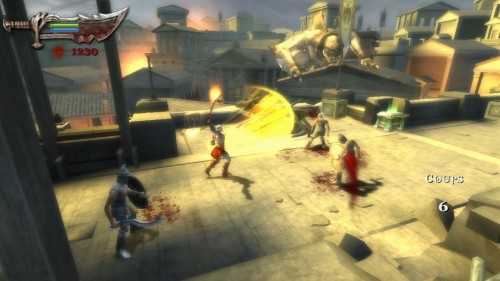 Stories
Chain of Olympus focuses on the events of Kratos, the hero of the series, before the first game. As a warrior of Sparta, he is sent to the Greek city of Attica to defend the city from an advancing Persian army. Trudging along through the city, Kratos encounters the Persian King. A fight ensures with Kratos emerging victorious. He is also forced to fight a giant basilisk in the city. After successfully defending the city, he leaves, only to see the light of the Sun come crashing down in Marathon. It turns out that Helios, god of the sun, has been abducted. It is up to Kratos to find and rescue him.

Ghost of Sparta focuses on the origins of Krakos and confronting demons of his mortal past. In this game, Kratos is the God of War, which would place it in between God of War II and God of War III. There was an oracle that foretold the demise of Olympus. However, it would not be the Titans that would exact this revenge but a warrior marked by the gods. Zeus and Ares (the God of War at the time) suspect that the oracles talk about Deimos, who is Kratos’ brother. Deimos is kidnapped and tortured in Death’s Domain. Kratos (adult) decides to find his mother in the temple of Poseidon in Atlantis (against Athena’s wishes) and, after finding her, discovers that Deimos is still alive. He decides to embark on a journey to find him.

Both stories are told with the same pacing that the God of War series is known for: very quickly. One problem with the stories is that they seemed quite short. I felt that, due to the small time period, they had a lack of substance and used cliches without having a real twist or new meaning to them. For characters, Kratos is Kratos, a violent, enraged man that only longs for blood of his enemies. I like the consistency with the character. I also like the fact that there is a softer side hiding behind that tough exterior. If the stories were a little longer, more could have been explored in both stories. 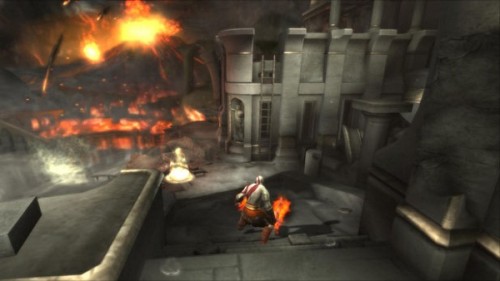 Gameplay
Both Chains of Olympus and Ghost of Sparta pretty much feature the same gameplay that the console brethren feature. The game is hack and slash, but with a lot of blood and gore. Players will use both the square and triangle buttons to dish out light and heavy attacks respecively. Of course, mashing the two together can lead to combo attacks. Special attacks, like a whirlwind attack for the Blades of Athena, are also present, adding variety in your arsenal of attacks. Of course, there are minor changes in gameplay, as Chains of Olympus emulates the PS2 games and Ghost of Sparta emulates the PS3 game. For example, both games feature wall climbing, but Ghost of Sparta only features a quick slide down mechanic. Box-based puzzles also make an appearance, as well as weapons and abilities not seen in the console series.

Quick time events are prominent in both games, or should I say in the whole series. Usually these are done during the boss battles. In these events, the player will have to press a certain button or perform a certain action in order to continue towards the end of the boss fight. Both Chains of Olympus and Ghost of Sparta also differ on this front. In Chains of Olympus, the buttons are displayed in the middle of the screen and rarely, if at all, use the analogue stick. Ghost of Sparta, on the other hand, puts the prompts on the side and more often uses the analogue stick in certain situations.

Each of the games also features a challenge mode for players to complete after they have finished the game. In these challenge modes, it is survival of the fittest as the player will be challenged to the limits. They will often involve hoards of enemies attacking Kratos at the same time, providing a challenge for the player to overcome. Rewards for completing such challenges often involve extra character skins or videos looking at the making of the game.

Overall, the gameplay will quench the thirst for God of War fans. The same hack and slash style of gameplay is prominent, with the weak and heavy attacks in tact as well as some special abilities and magic powers. Box- based puzzles make a return as well as the quick time events. The addition of the challenge mode adds replay value to both titles and rewards the player for the progress they make. Trophies, not originally in the PSP versions, also make an appearance, adding another reason to play some more. 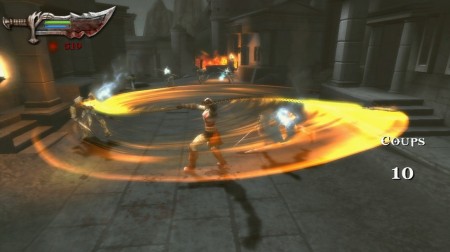 Visuals
The visuals of Chains of Olympus could have been done a little better when compared to its later portable title. The game looks like a updated Playstation 2 game. The character models look quite choppy and outdated. In fact, they also look a tad bit too colourful at times. This is quite odd for a God of War game to feature those sort of colourful sections. The beginning of the game, being in Attica, is one such example. Ok, it is in the middle of the day, bit I thought I was looking at a portable game (I know what Chains of Olympus was originally).

In comparison, Ghost of Sparta is the star of the collection when it comes to the graphical capabilities. The best way to describe it would be saying this is equal to the graphics of God of War III. They are very well done. The character models are well detailed. The environments are also well detailed and designed beautifully, especially with the buildings. The temple of Poseidon is one such great feat of graphical capabilities. Truly stunning quality. 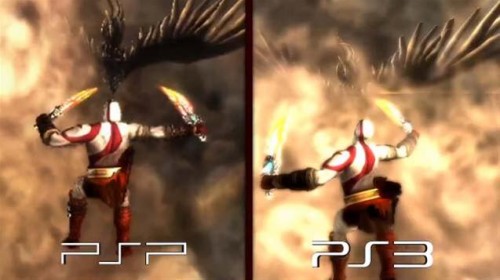 Audio
The audio of Chains of Olympus is pretty good. The soundtrack is your average God of War fare, epic music coupled with a choir shouting lyrics in an ancient language (most likely Latin). Since Greek mythology is quite epic, this is not a surprise. I do like the soundtrack, in fact. The tracks composed fit very well with the game and its main character, fighting for his life and embarking on an epic journey. One can expect the same with Ghost of Sparta. Voice acting is also not so different. Kratos shouts his lines with that incredibly deep voice of his. I mean, he sounds angry all the time, even when he wants to show compassion. Other characters have good voice acting as well.

Overall
So, is it worth the pick up? Of course it is. It has great gameplay, the visuals are well done to an extent, the stories, despite a lack of time and substance, are still worth playing through and the audio makes the games feel more epic. Whether it is the first time or a return to Kratos, this is one all Playstation 3 owners should not miss out.