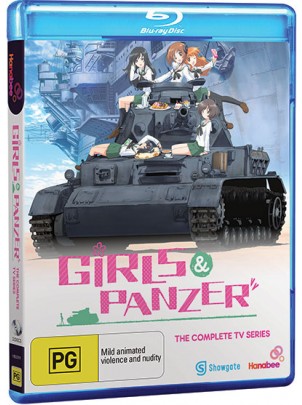 Overview
Have you ever seen a World War II documentary and as you were shown footage of tanks rolling over the blasted steppes of Eastern Europe you immediately thought to yourself, “Hey, what if that Panzer IV Ausf.D tank was actually crewed by a team of anime girls? Wouldn’t that be cute and interesting?”

I certainly have. Which is why I was delighted when a niche title like Girls und Panzer was brought to Aussie shores by Hanabee. So what’s this “Tankery” nonsense all about anyway?

Story
Oarai Academy isn’t your normal school, believe it or not. The students there are taking up a long-lost subject that involves oil and gunpowder rather than paper and stationary. It’s called “Tankery”, or Sensha-do, and it’s the art of using real military tanks to compete with other teams. Think of it as a game of footy, only with armour-piercing shells instead of leather balls.

Miho Nishizumi is our main character, a bashful and likeable girl but one who’s also intelligent and skilled in Tankery. Opposed to taking part in the sport at first, she agrees to form a team for Oarai Academy along with an unusual mix of friends. This kind of setup isn’t new and we’ve seen it before such as in the mahjong anime Saki, down to the superior older sister who is something of an antagonist. 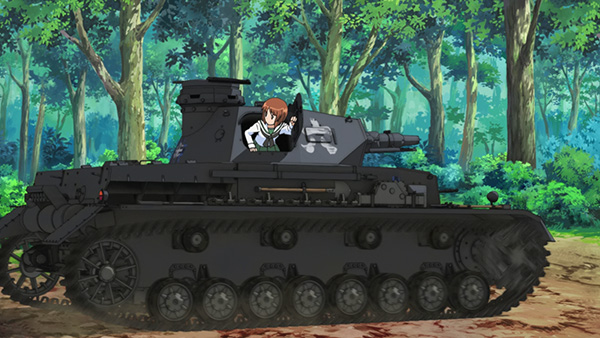 Girls und Panzer isn’t really about a grand plot. The brilliance lies in the team competition, the strategy of each battle and most importantly the authenticity of the tanks. You can laugh until your heart’s content for putting little girls in war machines but the creators have done their homework and definitely know their stuff. The anime features tanks from World War II, as well as the instructor’s modern Type-10,  in impeccable detail from the cockpit to the aiming sights and even the terminology. I learned from this show just how smart gunners have to be in order to calculate the distance to the target, and it involves a whole lot of math.

There are also clever cultural references placed throughout Girls und Panzer. Those familiar with tanks will smile when they see copious amounts of tea being drunk by the fancy team using British Churchills and Matildas while the feisty Russian team flawlessly recite (in the Japanese audio track) a famous song sung by the Red Army as they charge with their T-34s. 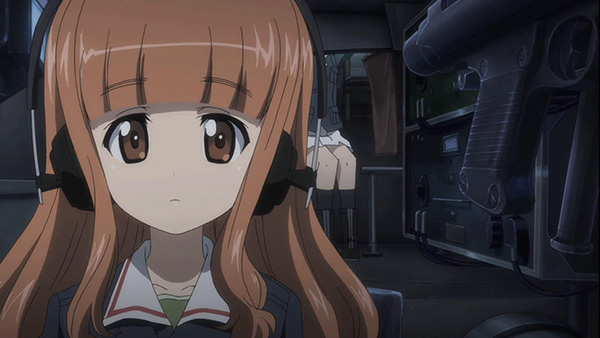 You’d think a sport like Tankery would result in fatalities but surprisingly that’s not the case. Girls und Panzer is all about fun, strategy and competition and no crew member is ever hurt when their tank is knocked out. How this is achieved is anyone’s guess but this is a deliberate design decision. The last thing you’d want to see is those girls get hurt!

Miho and her team start with a mismatched assembly of rusty tanks and learn through defeat how to achieve victory against teams that are technologically or numerically superior. They pick up upgrades along the way such as a longer barrel and armour skirts for the Panzer IV and by the end the girls from Oarai Academy are hardened vets with capable equipment. This is essentially a sports anime combining the military strategy and action we see in plot-centric shows with war elements.

Visuals
Girls und Panzer is pleasing to look at during its slice-of-life moments and even better when the action starts. Combining CGI with regular animation the tank battles are visceral, for want of a better word. The tanks are hyper-detailed, down to the individual nuts and bolts. The camera pans around the battlefield impressively and gives us awesome first-person views from the turrets of various tanks.

I actually haven’t seen any other anime use the camera pan quite as much as Girls und Panzer does. It gives us greater scope of the landscape and, more importantly, highlights the chessboard strategy during every intense tank match. 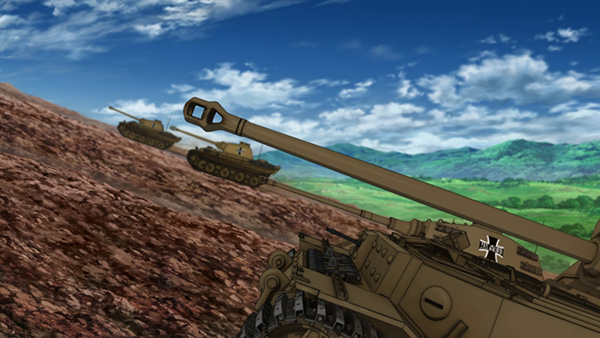 Audio
This is a show about tanks, so you’d expect the tanks to sound good. And they do. Main cannons sound punchy, treads creak and groan across terrain and the occasional machine gun fire sounds realistic complete with tracer rounds. The English dub performs surprisingly well, bar one annoying character, and the military terms used translate well into the English language. This is, after all, a method of warfare pioneered by the English-speaking West.

The music is lovely as well, with the soundtrack featuring military marches and themes remixed with a symphonic orchestra which adds to the authenticity of the show. The opening and ending themes are nice but a bit on the safe side. The opening is uplifting and catchy which is standard fare, but the ending is particularly cute with all the characters sticking out of their tanks in chibi form.

One complaint I have is that the famous Katyusha song which the Japanese voice actors sung so well isn’t even featured in the English dub. Whether it’s due to copyright issues or a decision made by Sentai Filmworks to not record the song with their voice actors. Instead we get traditional-sounding Tetris music which has no vocals while the mouths are edited to not move at all. My advice? Whack on the Japanese track just to hear the song at least once. 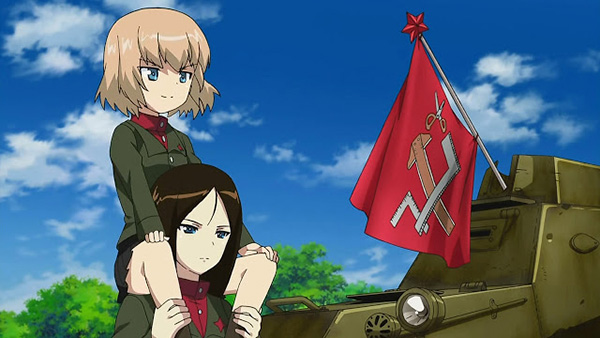 Extras
Included on the discs are clean opening and ending songs along with bonus episodes 5.5 and 10.5, which are essentially recaps of the show in case you forget what happens every several episodes.

Overall
Do you know your stalwart Sherman tank from your mighty Tiger tank? Then this is a homage to you, the military otaku. The authenticity alone is enough to send those nerve chills running down the arms of military aficionados.

Even if you don’t know your tanks this has all the qualities of a great sports anime. The competition, the bonding, the strategy and the tactics that are shown in almost every episode is enough to warrant a watch for those that enjoy these sorts of shows.

Also I have to applaud the fact that for once, thankfully, we have girls and weapons together in an anime without the cleavage getting in the way of the hardware. Now if you’ll excuse me I have a pincer maneuver to proceed with. Panzer vor!