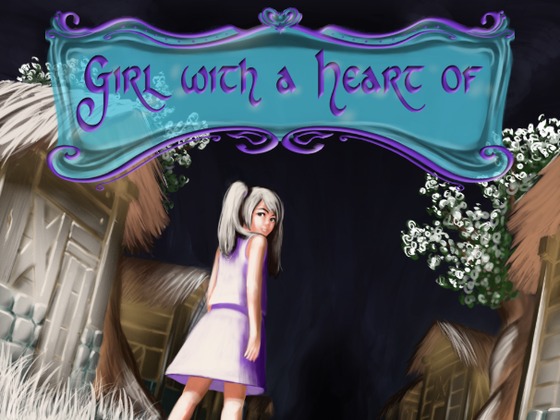 Overview:
Girl With a Heart of is the first commercial effort from indie developer Bent Spoon Games, a largely one man show with the slightly unusual goal of making games that deal with the concepts of rationality and transhumanism.

It’s very simplistic in almost every element, and is aptly billed as an ‘interactive narrative’ rather than a game. Indeed this isn’t even anything like a point and click title, but is far more reminiscent of the now age old text based adventure games.

Both this, and the fact that this is such a small title make it incredibly hard to judge Girl With a Heart of under the normal criteria for a game review. It’s audience will certainly be very niche, and even then it requires real input from the player on an emotional and analytical level before it truly opens up. Even if you do get yourself into the right mindset, it’s often too subtle and too quiet with it’s moral choices, and the technical execution of it’s rather interesting ideas still needs a lot of work. 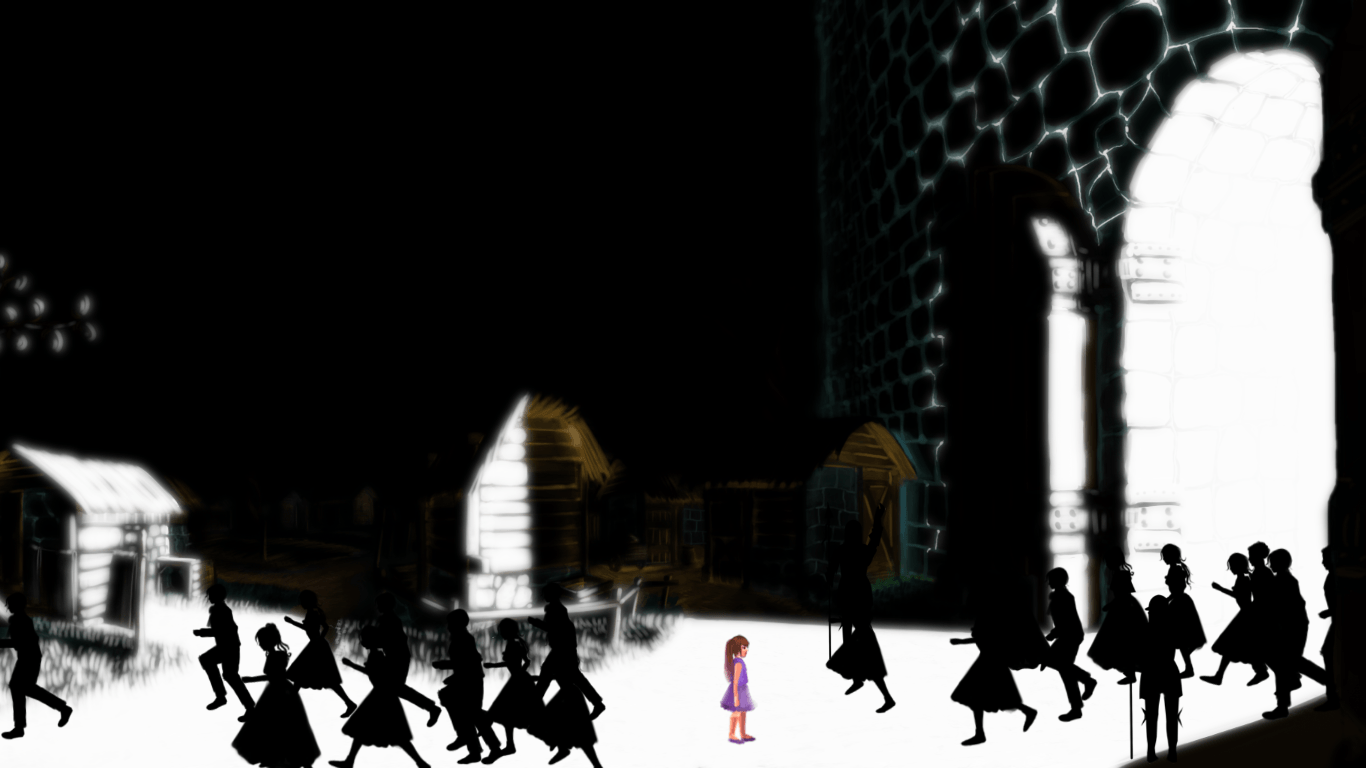 Story:
In the world of Girl With a Heart of, both Dark and Light fuel the world, which is broken into two feuding sides. Magic is a powerful if frowned upon force, and the war between the surface dwelling Light and the subterranean Dark seems without end.

Players take on the role of an eleven year old girl with an artificial heart living in the Dark town of Underfoot. When the town comes under attack by the forces of Light Raven suddenly finds herself with a grievously injured mother, a missing father, and the new knowledge that her heart has always been intended to turn her into a weapon to defeat the Light.Trained in the magic of Dark energy by the somewhat shifty John Blackbeard, Raven must decide how to use her new power in the global crisis whilst also dealing with more everyday personal encounters. Players will have numerous choices to make in their interactions, and will ultimately decide the fate of the world.

Depending on how deeply you delve into the conversations, there can be a lot of backstory to discover or very little at all. Giving over a bit of time to the concept is essential for a more rewarding play through, and the world that Bent Spoon Games have created is an interesting one that I would like to see more of.

It has an intriguing slant to it’s moral compass, challenging players to make life or death decisions with logic rather than emotion. Should you save the people you love or sacrifice them for the sake of the greater population? Girl With a Heart of pushes this heart vs head argument quite frequently, but what lessens it’s effectiveness is the small scale of the game. I know it’s ridiculous to compare an indie title like this to a studio backed titan like Mass Effect, but it’s the easiest way to make the point.

In Mass Effect I see a lot of the world, interact with lots of different people- I have a context for the decisions I make which gives the eventual consequences a lot of weight – what I do matters to me. In Girl With a Heart of you see nothing of the attacking side, and can potentially play through the game learning nothing about them or the reasons behind the war. The people of the Dark world are for the most part silent figures, and the relationships you do experience are so brief and limited in their scope that there’s just not enough material to form any attachment to. It leaves even the biggest decisions of Girl With a Heart of feeling small and inconsequential, and whilst it might make you think, it certainly won’t make you regret or rejoice in your decisions. 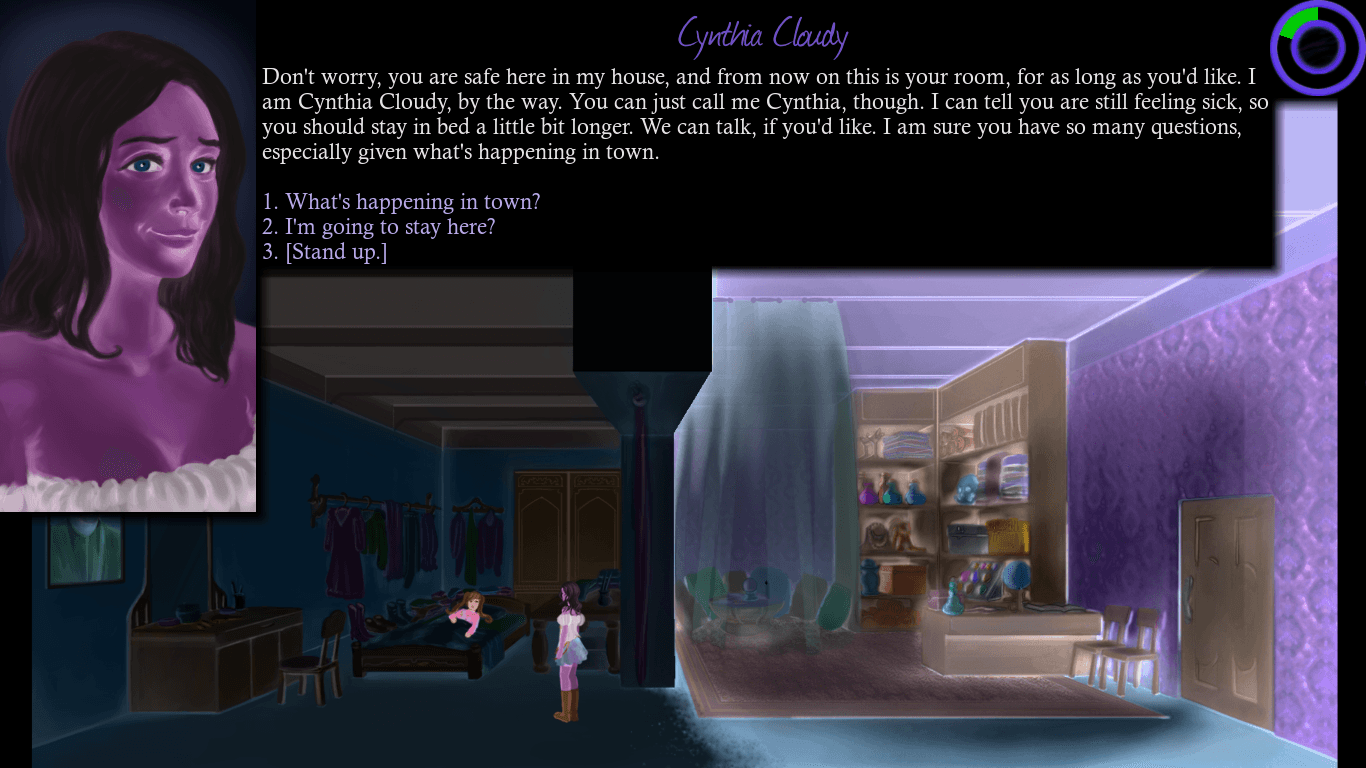 The transhumanist agenda (using technology to enhance our bodies and eradicate ageing is desirable and beneficial) falls largely by the way side, and also fails to explore the massive amount of ethical and moral pitfalls of using a child as a weapon. What it does do well is provide a sense of choice, and even the smallest of actions can change the way characters respond to you and have an eventual impact on the final outcome. Even the direction you choose to walk in the opening sequence has an effect, and highlights the odd association that society has when it comes to light and darkness, good and evil. It can be overly subtle with what is and isn’t a choice, and the depth of it doesn’t really unfold unless you play through it multiple times.

Girl With a Heart of is incredibly dependent on the player being willing to delve into the depths of it’s ideas, and unfortunately doesn’t quite have the quality of presentation to lure people past all the reading. If you give it a chance it might throw a few interesting ideas and dilemmas at you, but most will probably pass over it.

Visual:
The art style is very unusual, and at first glance appears rather ugly. Characters have strangely purple skin and look and move like cardboard cut-outs. Everything has an odd tinge of light to it and the intensity of the colours gives it a strangely muted feeling- my first thought was that it looked like someone had pushed the ‘invert colours’ button in Paint.

As with the story elements of Girl With a Heart of, how much effort you put in to interpreting what you see on screen affects how you rate the style. At first glance it’s ugly, the colours are wrong, the shading is strange. But then think about it. This is a world which we are told is fuelled by darkness rather than light, in direct opposition to what we see every day in reality and what every game thus normally looks like. Light is always a fundamental element of how we view the world. Here it isn’t, and darkness rules. Such a world would feel strange in its colours, and in place of shadows it would have light. Look again – isn’t that what Bent Spoon Games have done here? 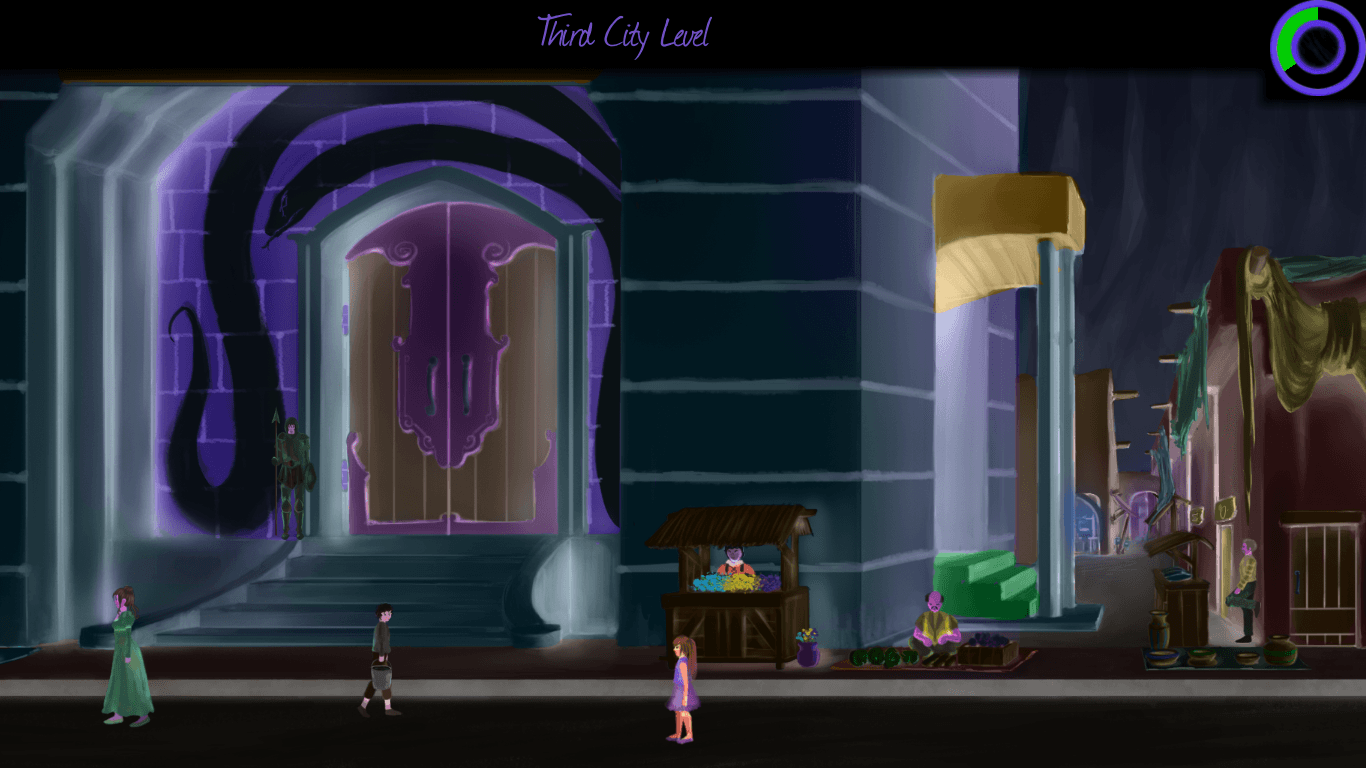 Having a concept behind your artwork is fine, but it still has to be visually pleasing- despite appreciating the thought behind the style I just didn’t like looking at Girl With a Heart of. There are a few sequences where everything is in a more stark black and white, with Raven the only colour in her purple dress. If the game had looked like this throughout I think it could have kept a lot of it’s distinction but in a visually pleasing way. As with all the elements of this game, it’s very well conceived conceptually, but whether because of budget constraints or design choices, is not always well executed.

Audio:
The sound is what really lets down Girl With a Heart of. When you have such a minimalistic style of gameplay and level design (and no voice work) there needs to be some depth in the music and effects that makes you feel like you’re doing more than pushing buttons.

There is music throughout the game which does a good job of laying down the foundations of a subdued and uneasy atmosphere. Whilst the tracks themselves are fine, they often run out if you take the time to work through conversation options, which, if you want to get the most out of this game, you’ll be doing a lot.

Crucial moments can sometimes have no sound at all, and whilst there are a few audio cues to let you know when there is danger around, there are some points in the game that sorely miss either music or a few sound effects (which are entirely absent).The lack of sound effects really hurts the games aspirations. When Raven takes damage there is no indication but the health bar that this is actually happening, when precious objects are destroyed or gained there is no sense of loss or reward.

One moment in which this is particularly apparent comes when you can choose to save the life of a young boy who has been bullying Raven throughout the game, or walk away and leave him to die. Visually, the boy is just lying on the ground after being attacked by a wolf. It’s a completely silent moment, which surely would have been rendered far more effective with a few whimpers or cries for help. As it was I assumed that the boy was dead and left the area with no idea that there was even a choice to make. Subtlety is a great thing to aim for when giving players moral choices, but you have to make sure they know that they exist in the first place. My walking away might reflect something about my personality, or it might just reflect that the door to leave the area was closer than the boy. If I had known there was a choice to make I may still have left him, but actually felt some sort of repercussion from doing so. 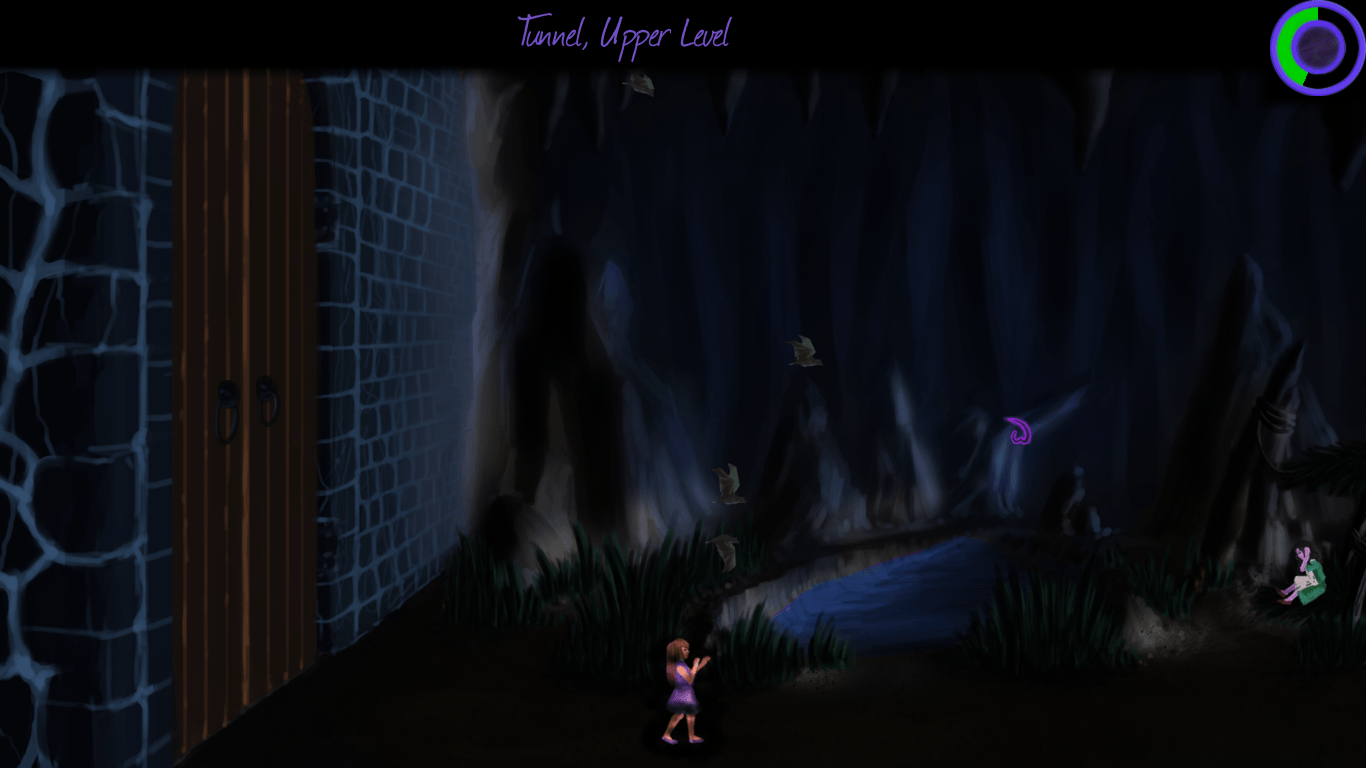 Gameplay:
This is something of a redundant section, given that for the majority of Girl With a Heart of you will simply be walking between conversations. Raven will pick up a few Dark magic spells in the course of the narrative, and gain skill points that can be distributed between insight (gain more conversation options), lying (become better at deceiving people), magic (more powerful spells) and imbuing. The latter is the most complex mechanic that the game offers, and tries to integrate your moral decisions into Raven’s development.

Passing some of the more significant plot points will grant Raven an essence (courage, stone, gold etc), which she can imbue into her heart to grant bonuses to her skills. It’s a nice idea that neatly adds a direct consequence to a few of Raven’s choices, but the skill bonuses that they grant are for the most part inconsequential as the game is so focused on conversation. The mechanism is really only relevant in the game’s closing moments (perhaps, depending on your choices). What I did enjoy about the imbuing was it’s link to the title, and being able to finish off that unusual Girl With a Heart of … title in your own way is a lovely touch.

Overall:
I really respect what Bent Spoon Games are trying to accomplish in Girl With a Heart of, and the concepts behind it are for the most part excellent even if their execution isn’t the best. Titles like this have such a limited appeal that there has to be something to make them stand out, and sadly for Girl With a Heart of I don’t think any of its elements are quite there yet. The world and the story are easily the most intriguing aspects of it, but they are also the quietest, hidden away in conversation trees and behind a less than appealing art style.

Ultimately it is the first commercial title from a very small developer, so I hope that Bent Spoon Games get the chance to progress, because some of the conceptual groundwork here has a lot of potential. If you support indie developers and in particular this kind of storytelling (thought provoking over fun), then by all means give Girl With a Heart of a try.