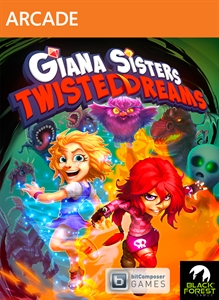 Overview
While originally released for the PC back in October of last year, Giana Sisters: Twisted Dreams finally made its way to consoles, so that those that aren’t as interested in PC gaming would be able to get their hands on the title that found success through Kickstarter. Finally back on consoles since the release of the original The Great Giana Sisters, just well how does the game stack up as an XBLA title?

Story
Opening up to sister Maria being kidnapped into a dream world with sister Giana jumping in for the rescue, the main component of the story is based around Giana trailing behind and trying to catch up to save her sister from a dragon. What makes the rescue most difficult is the fact that the dream world itself is a nightmare reflected by the contrasting personas of Giana. Switching between “Punk” Giana’s nightmare of fairytale fantasy and “Cute” Giana’s nightmare of gothic fantasy will be the only way for Giana to make it all the way to save her sister. While the story itself is simple and straightforward it is also elegant in its execution, so that the main focus is the gameplay itself. With short cutscenes that are straight and to the point, dialog is completely avoided to provide an experience that can be enjoyed by anyone that picks up the controller. 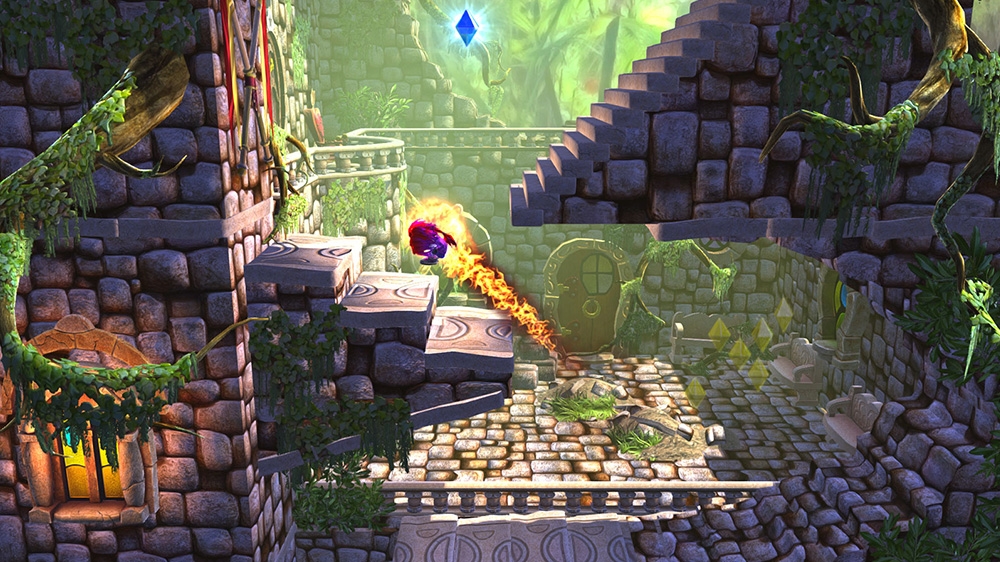 Gameplay
This switching between her personas is the key component to the gameplay as each persona is equipped with a special ability that aids in solving the puzzles and overcoming the obstacles Giana must face, such as platforms only usable to one persona. While “Punk” Giana is armed with the more ferocious ability to dash in any direction, bouncing off walls or defeating enemies, “Cute” Giana can twirl through the air carrying her farther through the air and safely around dangerous terrain. While each persona is the host of their specific ability, an interesting aspect of gameplay is that the world can still be twisted between personas during their use, so “Cute” Giana can start twirling and change into “Punk” Giana creating another layer to the puzzle solving.

The controls themselves with the Xbox 360 controller function wonderfully with face buttons controlling jumping and each special ability, while the triggers are reserved for twisting the world around Giana. Those familiar with the controller should have no issue being able to pick up the controls right away, though getting used to Giana switching personas on the fly when pressing the button to use an ability does take a little getting used to, however after mastering becomes second nature. There doesn’t seem to be any way that controls could be moved or changed to improve functionality at all and feels perfectly designed for consoles. 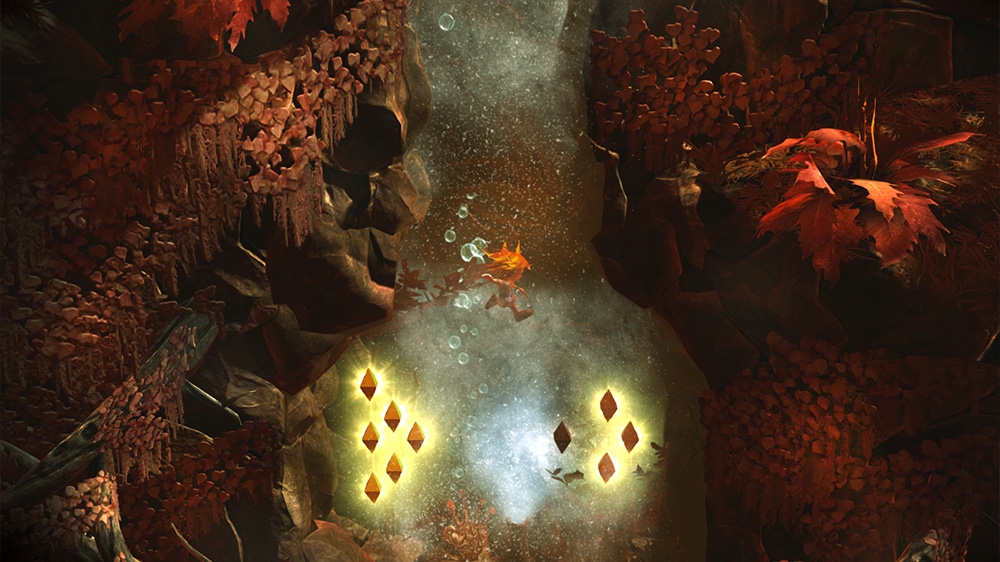 Besides just puzzles and obstacles, Giana faces a whole host of enemies as well, that also change with the environment, from owls and knights in armor hassling “Punk” Giana to devils and skeletons harassing “Cute” Giana. As the enemies themselves change with the environment, the game looks to color to indicate how specific enemies move about, as some will remain on platforms and others will drop down to the next. This provides a unique solution to a unique problem in aspect to the game itself for how to handle varying enemies, and is a solution easy to understand as well.

Along with the enemies in each level are the gems, that Giana collects along her journey to save her sister. Coming in three different colors, the gems add a collectible aspect that reinforces the twisting nature of the game world. While the blue gems can be picked up by either persona, yellow gems can only be collected by “Cute” Giana, and red gems by “Punk” Giana. Not only do the gems provide a main component by requiring enough to face bosses, they take the collection aspect in a different turn, instead of simply how can Giana reach up there, but how can “Punk” or “Cute” Giana reach up there. 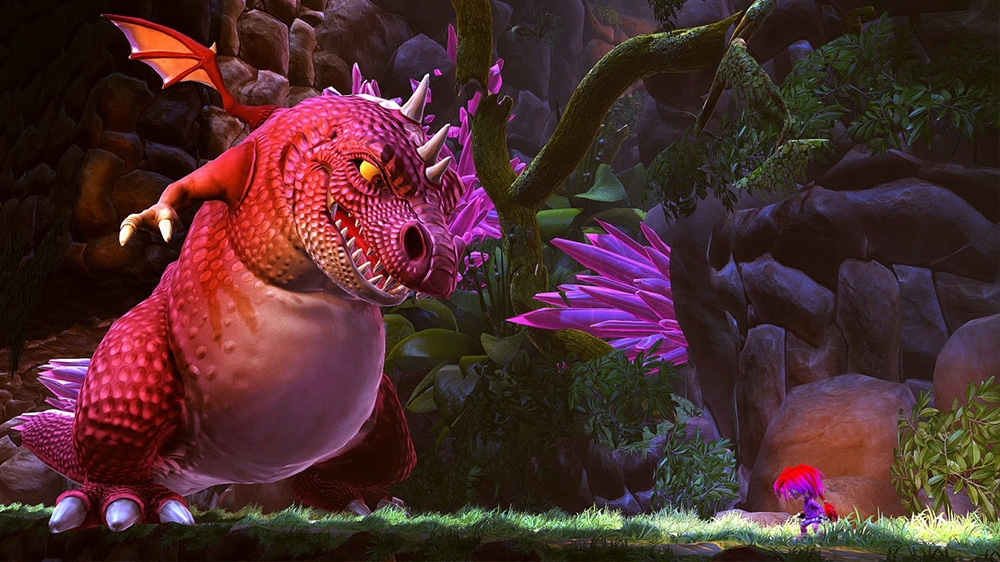 With all of these different aspect as well as big boss battles, Giana Sisters: Twisted Dreams provides even more with additional modes. While Score Attack and Time Attack change the goal of each level to see how well a player can do, Hardcore Mode and Über Hardcore Mode are where fans of older games with crazy high difficulty will get the more fun, frustration, or both. While Hardcore Mode tasks players with completing each level in a single life, Über Hardcore Mode tasks them with beating the entire game in a single life, which is pretty crazy for a game where one hit means death without a pink gem shield. Those that like to have more to do in levels after finishing the campaign will find plenty here.

Visuals and Audio
As almost every aspect of the game rests on the contrasting personas as well as the environments they must traverse, it’s great to see that the visuals are of such great quality. The screenshots here are a perfect representation of the visuals in gameplay, which are absolutely awesome to see as Giana Sisters: Twisted Dreams is one of the best looking games to come to the XBLA so far this year. What’s more, the visuals aren’t the only aspect that twists with Giana as the soundtrack features “Cute” and “Punk” music that also match the environment, though players that prefer one can set up the music to a single option throughout. The visuals and audio not only highlight, but add to the unique gameplay. 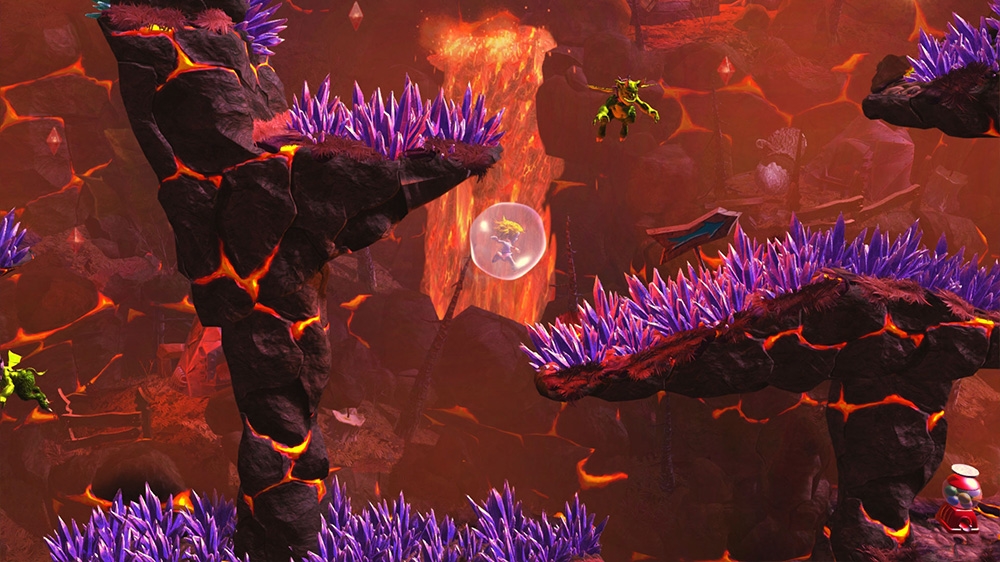 Overall
Giana Sisters: Twisted Dreams is a great platformer that not only works well on the Xbox 360 and with the controller, but provides gameplay that doesn’t get stuck behind or nailed to a narrative. With outstanding looking visuals and a soundtrack that not only fits, but morphs to match the game world, platforming fans that missed the PC release and are looking for a campaign with unique gameplay and plenty of additional content should be able to find it here. Plus, with controls that perfectly suited for a controller the game fits right in on the XBLA.