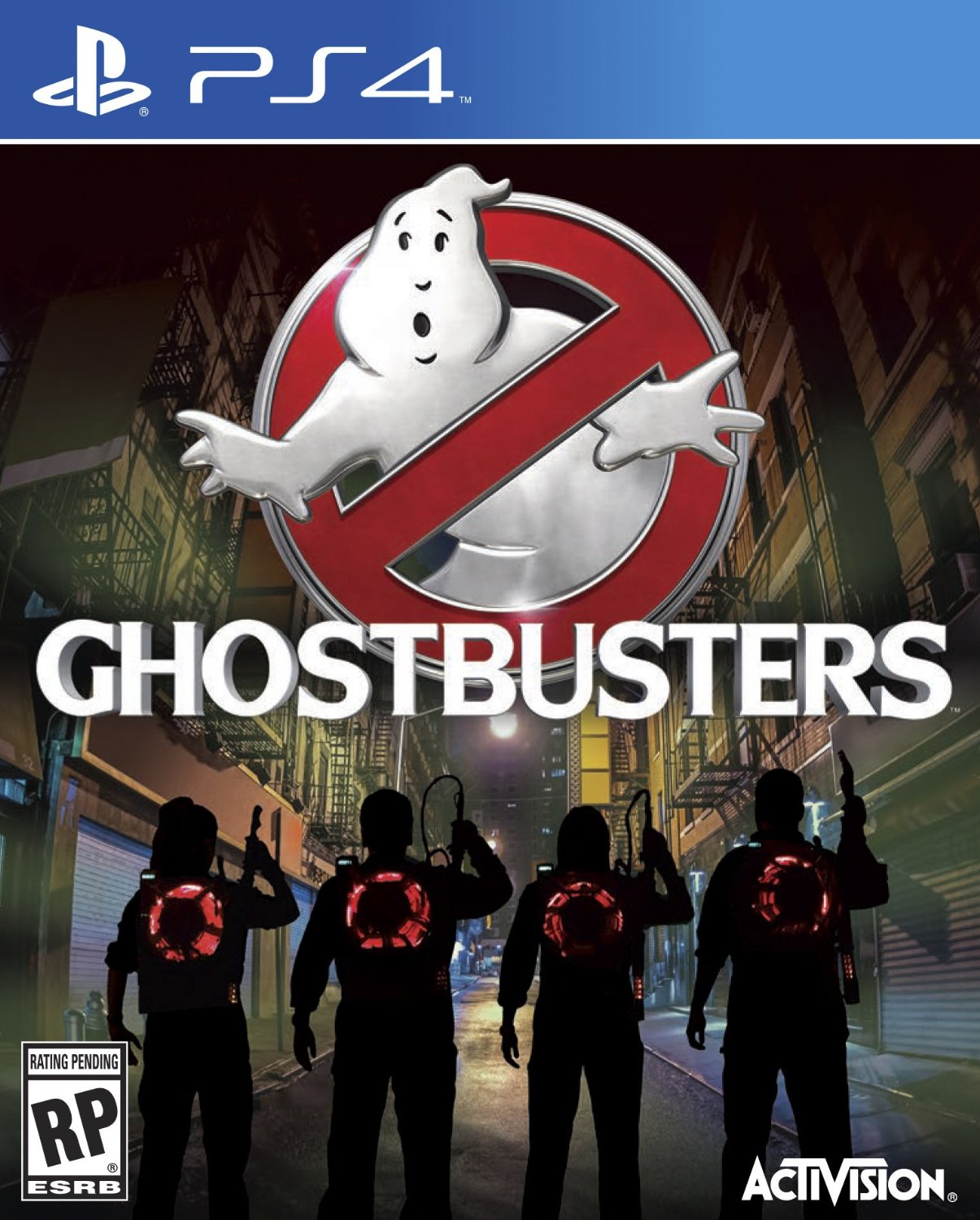 Ghostbusters the 2016 film may be the most controversial film release of the year, but the 2016 video game release of the same name is much tamer in comparison. A top down shooter with RPG mechanics, Ghostbusters is set just after the events of the film. The ladies have gone on a cross country ghost busting tour of the United States and have left four brand new rookies in charge of New York City. The city is plagued with a rash of ghosts and now the rookies must step up to the plate. 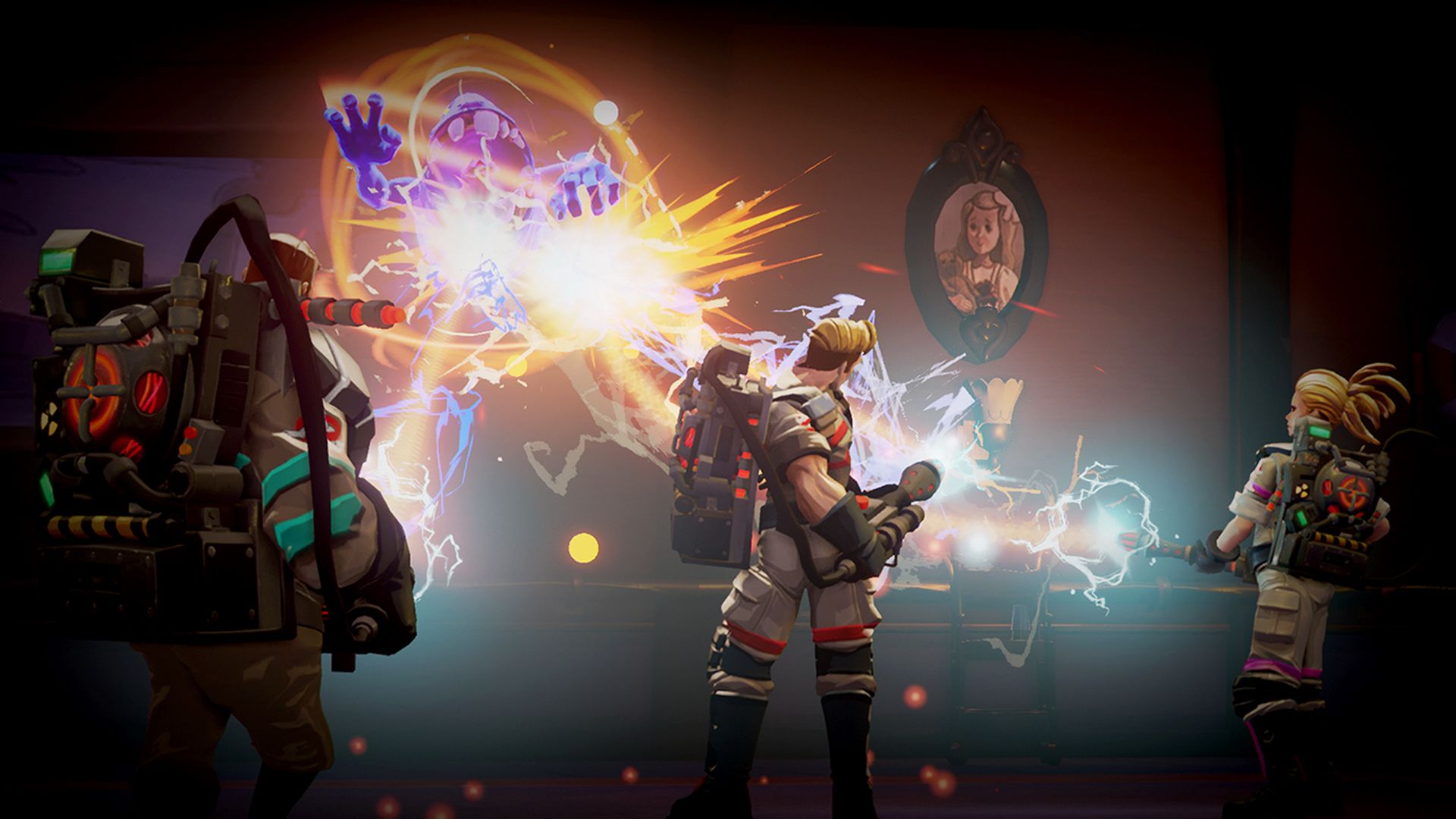 Ghostbusters is pretty bare on plot. It serves purely as window dressing to provide the minimum background for the levels. None of it is particularly interesting, either. The writing is incredibly lazy, with the same small handful of cheap one liners being recycled throughout the game. For a game that is supposed to be a co-op title, all of the characters exist in a bubble in-game. Even though they are capable of combo attacks, there is no banter between the characters or vocal interaction. It is as if characters are just shouting corny one liners out to the universe.

Ghostbusters is a top down shooter presented in a 3D isometric view. Each of the four characters have their own weapon and grenade type. Grenades can be used together to create combo abilities. Score earned during a mission is converted into experience points. Get enough experience points to level and the player gets a skill point to spend. If it sounds like every other generic top down shooter, that’s because it is. 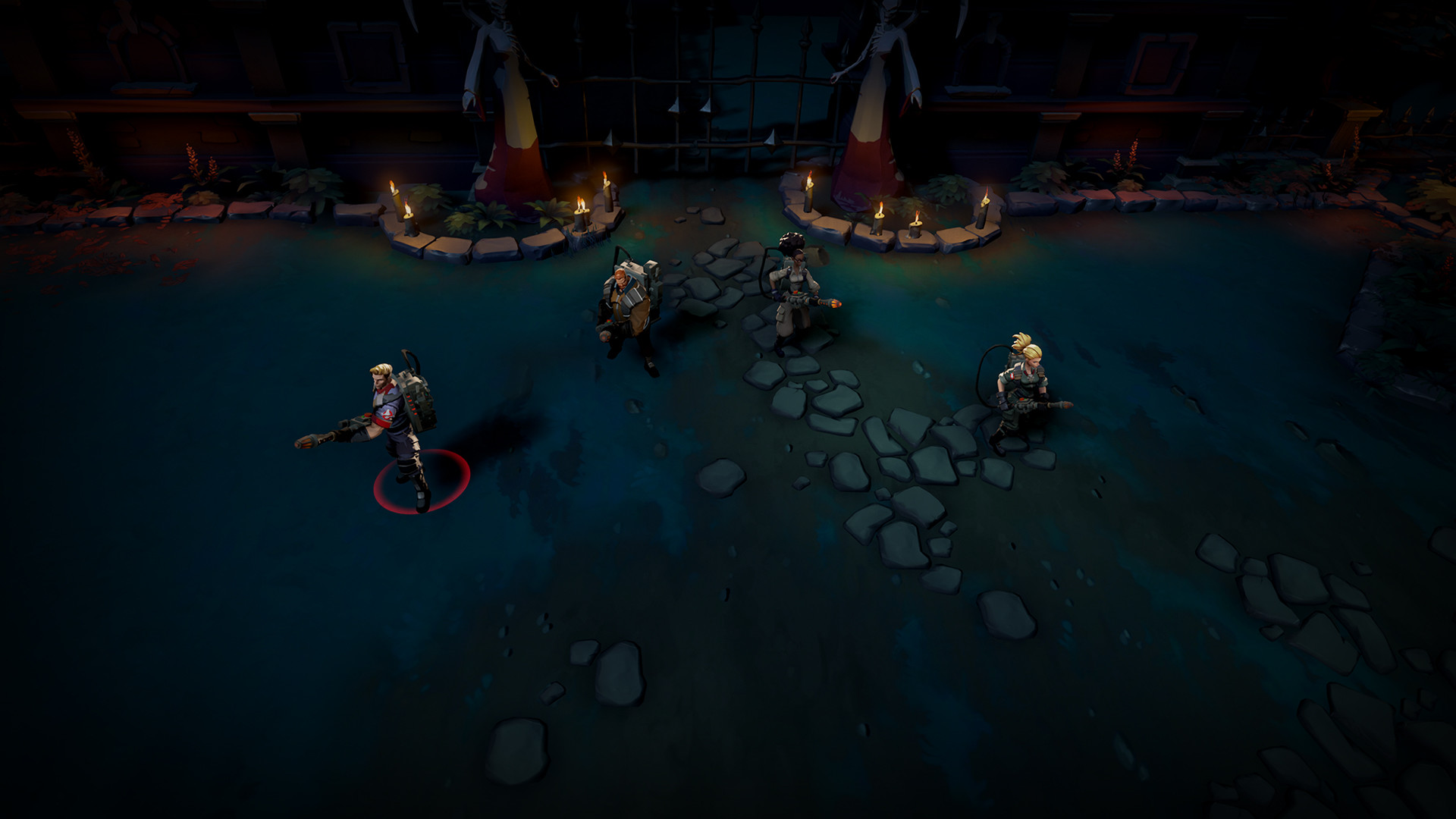 Ghostbusters is incredibly shallow. There are only five zones in the map with three levels each. Levels are an incredible drag, with some of them lasting taking up to thirty minutes to clear with side areas explored. They are almost completely linear, with a few detours here or there for optional collectibles. Players are encouraged to use their P.K.E. Meters to find the trail of a ghost or bonus points. The use of the meter feels pretty pointless as a faint purple haze signifies a bonus area and the game tells players when to pull out the meter to trigger an event. One could assume the P.K.E. Meter is designed to guide lost players to their objectives, but there’s a separate function for that, which makes the meter all the more pointless. To make matters worse, the meter causes a slowing effect which is just plain annoying.

All four characters carry the standard Proton Pack and trap combo to wrangle ghosts. Each character has a main weapon from the standard shooter archetype: a balanced assault rifle, a shotgun, a pair of fast firing pistols, and a minigun. The weapons have an unlimited supply of ammo, but they do need to be reloaded by “venting” heat. If the weapon becomes overheated, then players are saddled with a reload time penalty. Each character also has a special grenade that also draws from the standard shooter archetype. These grenades can be used together to create combo effects that are really less impressive than they sound. 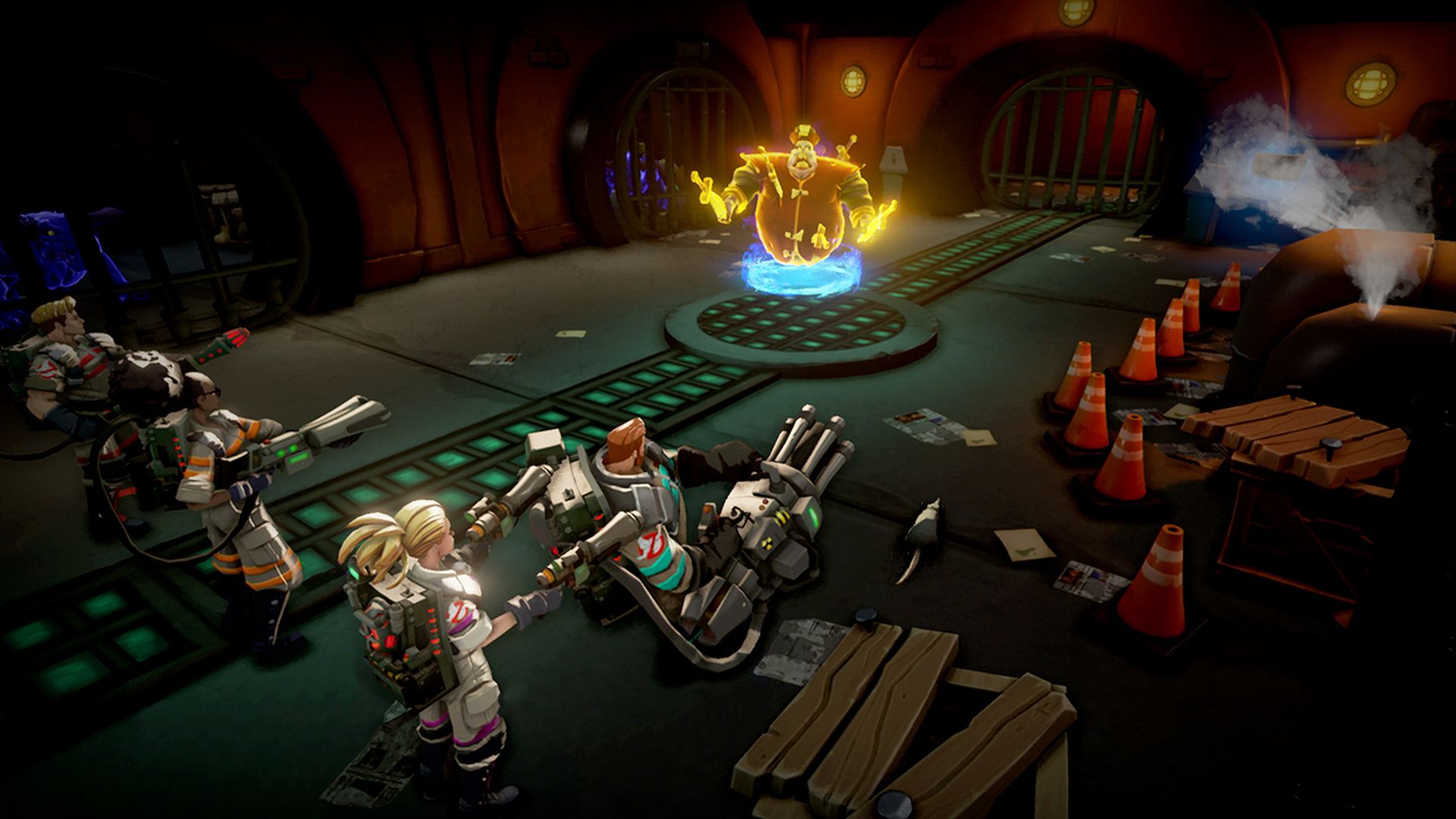 Once elite enemies and bosses have their initial health pool depleted, players get their chance to capture the monster by wrangling them with their Proton Packs until they can be trapped. Wrangling ghosts requires a simple rodeo style mini-game that speeds up the process if the mouse or left thumbstick is in the correct position. Once wrangled, a trap is deployed and the player gets to mash a button for a bonus multiplier.

Each character has a skill tree they can spend their skill points on. Each tier is locked behind a level requirement. All of the skills are completely underwhelming, as they serve to provide small stat upgrades to existing equipment. The result is feeling like little has changed after leveling up and entering a new level, it’s just the same old, same old. Even more annoying is the the fact the game actively discourages players from experimenting with new characters. If players want to switch characters to try a new weapon, they must start at level one with the new character. 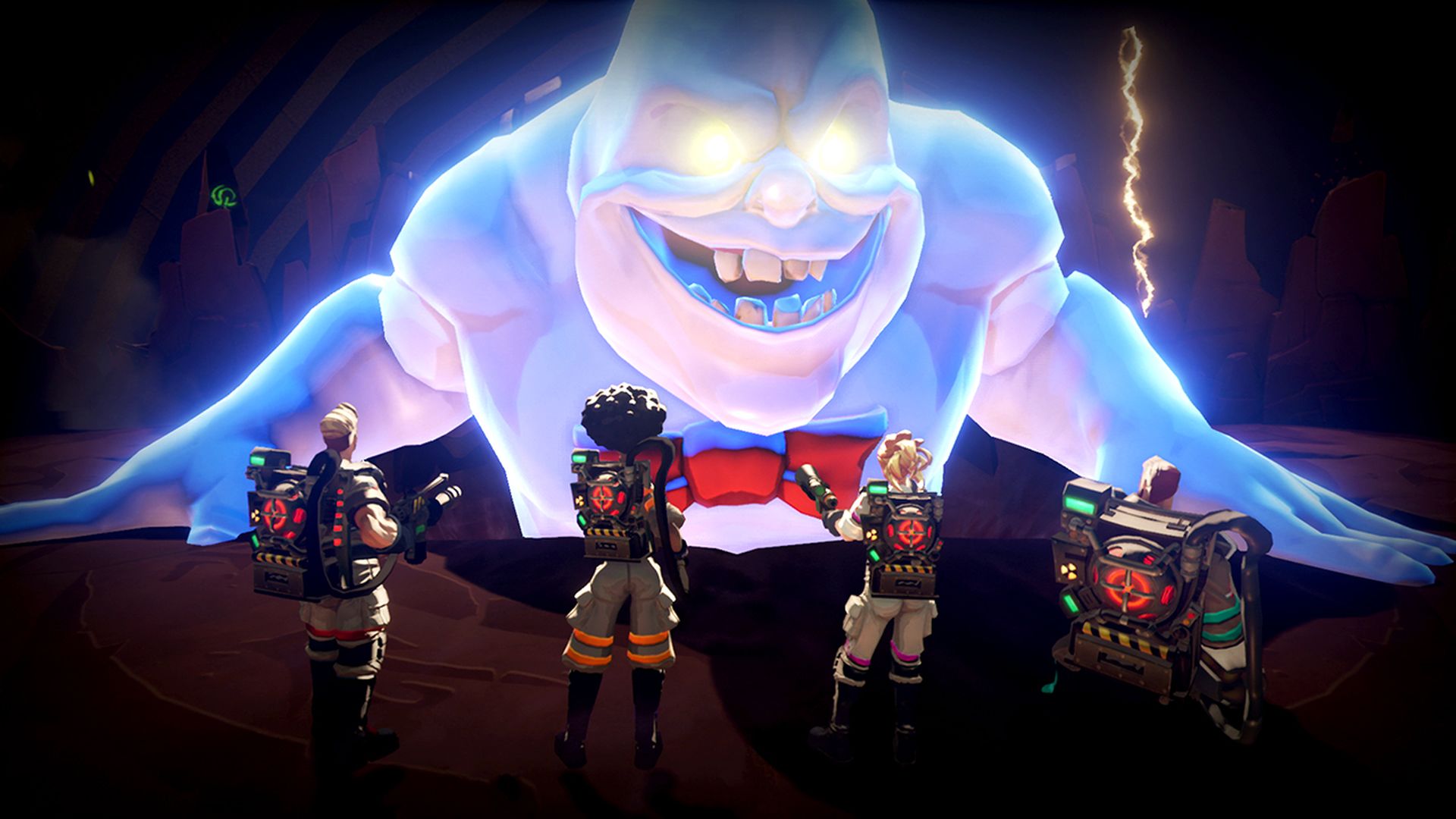 Ghostbusters is just a boring game. It is incredibly repetitive and dull. Players run around and pump bullets into enemies that pretty much feel the same until they die. Once in a while, an elite pops up and players have to go through the chore of capturing the ghost. The poor level design makes each level feel exactly like the last. If players want to share their misery, they’ll have to invite friends over for local couch co-op, as there is no online co-op support. The only real interesting draw are the unique bosses, and there are only a small handful of them in the game.

The controls are a mixed bag, depending on what platform you choose to play it on. It’s a standard top down shooter layout on with a controller, and there’s nothing wrong with that. It’s simple and it works. On the flip side, the PC port is just plain awful. The UI has clearly not been designed with PC players in mind. Instead, the controller bindings are essentially bolted on the mouse and keyboard. There is no way to rebind keys and the mouse is completely pointless for navigating the menu. 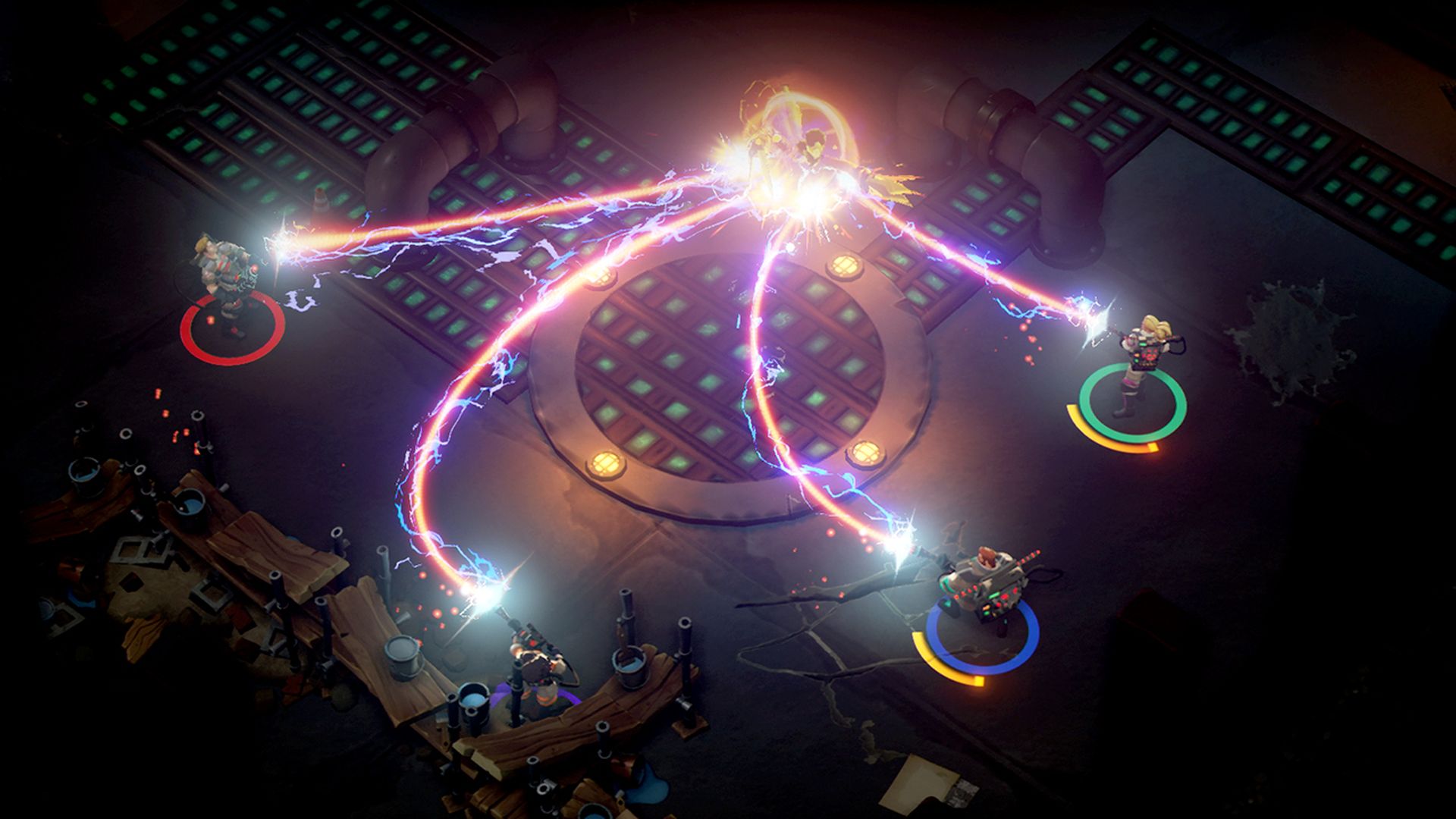 Ghostbusters has a nice, but slightly generic cartoon art style. There isn’t too much variety in the levels, which means the levels visually start becoming a giant blur very quickly. The in-game graphics aren’t much better. Even with the graphics cranked up to max on a 1920×1080 monitor, things like player characters are suffering from a serious case of the fuzz. The blurry graphics are made even more obvious when contrasted with the sharp looking UI. For PC users, there are the standard graphic settings that can be adjusted. I couldn’t seem to get the true fullscreen setting to work, as it always seemed to behave like a windowed fullscreen instead.

The only positive thing I can really say about the audio is that the Ghostbusters theme song is in the menu. The voice acting is B movie level at best, the soundtrack is uninspiring, and the only real sound effect you can hear most of the time are the pew pew pew of the weapons. The most frustrating thing is how poor the audio is for the voice acting while in game. The voice acting audio in the menus and cutscenes sound like the standard definition used for video games. But once in game, the quality drops significantly, sounding more like a MP3 file recorded at 32kbps or below. In less technically inclined, it’s like the audio is being played out of an AM radio. 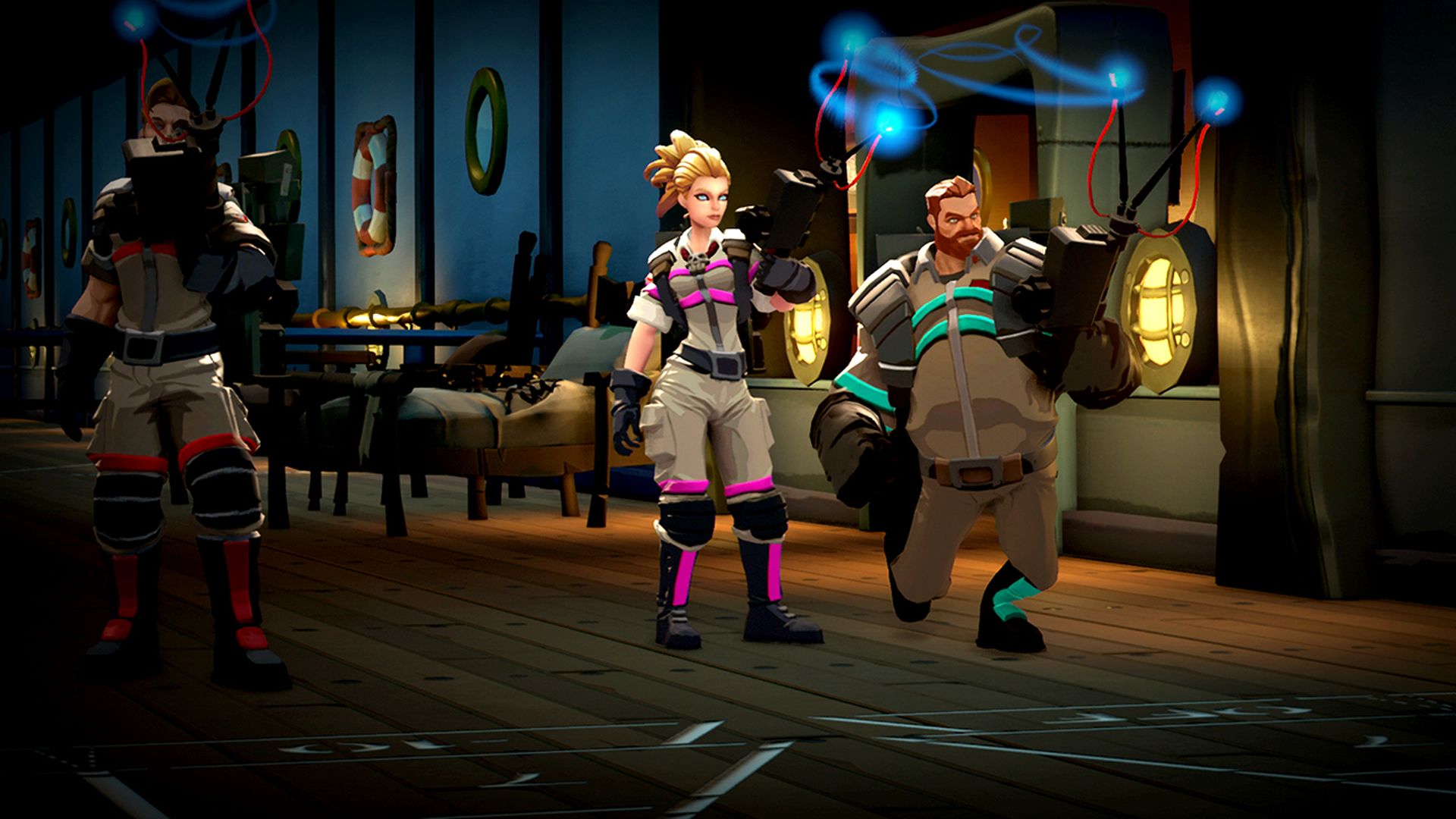 What is so disturbing about Ghostbusters isn’t the ghosts, the boring gameplay, the lacklustre story, or the poor audio/visual quality of the game. It’s the price. If Ghostbusters was a mobile game priced at three to six dollars, we would have a pretty average title. It wouldn’t be amazing or groundbreaking for a mobile game, but it would likely earn some okay reviews. Instead, players are being charged fifty dollars for a high end mobile game that overstays its welcome. It’s clear attempt to cash in on the release of the movie.

What’s really sad about this entire affair is that there are good Ghostbuster games. This one just isn’t one of them. If you’re in dire need of a Ghostbusters game that you will actually enjoy, go pick up Ghostbusters: The Video Game on Steam for $9.99 USD. You’ll have way more fun and save yourself forty dollars to boot.
Capsule Computers review guidelines can be found here.