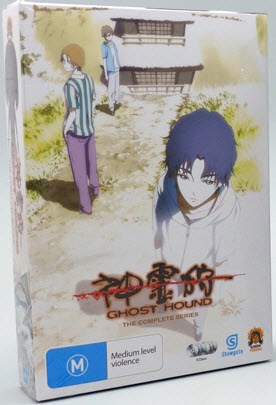 Do you believe in ghosts? In a world full of scepticism and disbelief in the super-natural, the notion of being haunted by a spirit is one that is often dismissed as a childish fear that is eventually grown out of. And yet the idea of you yourself being haunted by one can still send a chill down the spine of even the bravest man or woman. But what if you were believed? What if you could find people just like you, haunted by identical poltergeists and spirits? As an anime series, Ghost Hound explores this notion that a medium sense is not just for the touched-of-mind. A story told from multiple perspectives about an otherworldly reality seeping into their own. The mystery of a series of deaths suddenly become interconnected, and fates become linked. Undoubtedly it is an anime that clearly wishes to establish itself within the horror genre by presenting themes and situations to scare and shock. 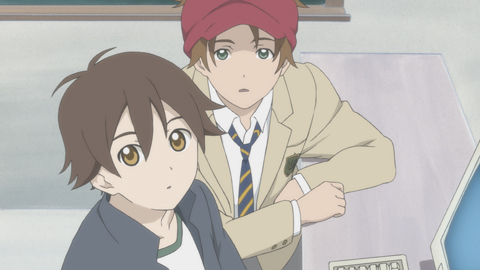 There are three very different and special boys in the small town of Suiten. When Masayuki enters into the Suiten High school, he comes across two other boys named Taro and Makoto. They look like they have nothing in common but this is anything but true. All three boys are haunted by events in their past and this seems to allow all three to have out of body experiences. Thinking they are special and the only ones, they see the spirits and mysterious happenings around the town and decide that they have to figure out why and how to fix it. This is when they go to the shrine for help and come across the mysterious daughter of the shrine owner.

‘In the small town of Suiten, three boys discover they can transfer their souls to a parallel world. Each had traumatic childhood experiences…

Taro Komori- haunted by the death of his sister.

Masayuki Nakajima – tormented by the suicide of a classmate he once bullied.

Together they attempt to unravel the mysteries of their outer-body experiences and gain new perspectives on their unusual lives as they grow towards adulthood and attempt to reconcile with the darkness of their collective pas. When ‘ghosts’ from their unseen world manifest in their apparent ‘reality’, their lives reveal further mystery…’ 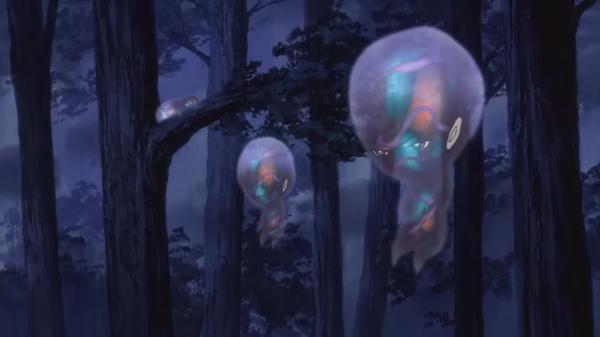 The standard of visuals that are presented to the viewers often interchange between bright and colourful to dark and gloomy. Many may initially feel that this sort of presentation deviates from the purpose of a horror themed anime. However, I feel that it is the presentation of both light and joyous against dark and deathly that makes the sudden appearances of ghosts and supernatural elements all the more horrifying when they do show up. This contrast effectively highlights how these supernatural entities are breaking the natural laws of the world by re-entering the physical world from the afterlife. When a ghost or spirit appears, the environment and colour schemes effectively distort to make the world feel “wrong”.

When observing the character modelling, I found that the presentation of human characters themselves to be well-drawn and developed, but, in all honesty slightly bland. The 3 main characters themselves all feature similar body types and have very little beyond hair styles and facial features to distinguish them. As an additional point, I feel that the designs of some of the super-natural entities were similarly bland. One ghost that makes a constant re-appearance is that of a little girl with pale white skin, and HUGE deep red and purple eyes. To the horror genre, the presentation of a little dead girl is nothing original. Still kind of freaky to see, but it’s really not anything that horror fans have not seen before. 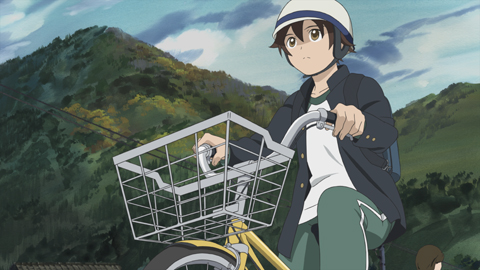 This is not to say however that the series is entirely without visual originality. The environments that portray the otherworldly crossover are quite unique. For a genre that often finds it quite difficult to show fresh and innovative ideas, the presentation of this fused before-and-after-death world existing in both imagination and reality. The contrast between the two is quite obvious due to alterations to colour and flair. Additionally, the special effects added lend credence to the thoughts of “wrong” otherworldly visages. As for animation, the characters are often multi-posed in dialogue, which is a refreshing change from standard anime formats.

The voice acting of the series is decent, but quite often I found many of the voices to seem a little more forced than was necessary. However, the presentation of an English dub to an English audience better instils the sense of fear and mystery to the series. Operating alone, visuals are not enough to scare or shock an audience. A combination of effective, reactive voice acting, as well as deep striking soundtracks are considered base requirements for producing a horror theme. For what they are worth, the supporting cast of the series are actually more effective in presenting this idea of fear as opposed to the main characters themselves. (Most likely due to the fact that their pasts are already dark and tragic). Through their eyes, the presentation of haunting spirits is less likely to be scary than to someone (say a counsellor) from the outside looking in.

Additionally the soundtrack works remarkably effectively in building up an audience sense of suspense, and, to a similar extent, the shock when the visuals are effectively combined. 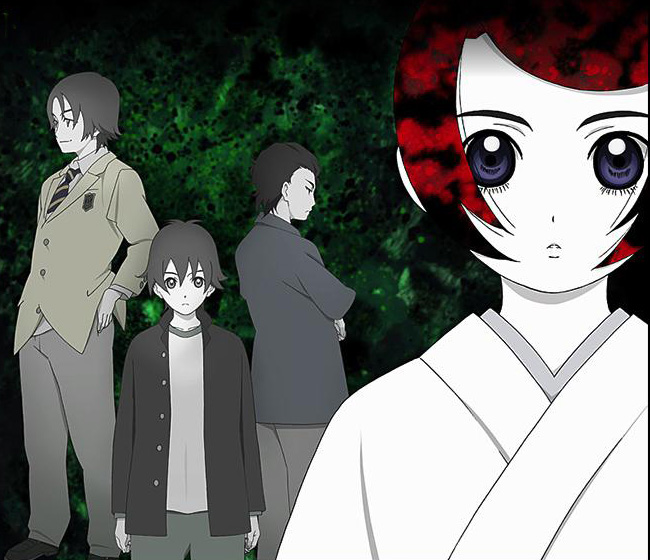 Taro is portrayed as the main character out of the main four characters that are present in this anime. He is innocent, quiet and well behaved 14 year old boy. He seems to be a perfect Japanese son for his parents, the sake factory owners, but they don’t seem to notice him too much. They as well as Taro are trying to cope with the horror of his sister being kidnapped and killed when he was a young boy. The whole kidnapping of his sister and him because famous, and therefore Taro is seeing a physcologist to deal with his traumatisation. This traumatisation also seems to be the cause for Taro entering a whole new plain by astral projecting. In this new world, Taro searches for his sister as he tries to come to terms with what happened to him and her.

Makoto is a dark and rebellious boy that has to act more grown up then the rest of people his age because of his family situation. His mother left him at a young age and then his father committed suicide when he was a young boy. He now has to live with his grandma who is the head of a religion that their family has made. She ignores him mostly and keeps him to the side but expects him to take over the religion. Makoto copes with all of this by acting like he knows more than everyone else and hiding away from his grandma, in his room playing guitar. This whole situation and traumatisation seems to allow Makoto to have out of the body experiences. He also seems to have been the one having out of body experiences longer than the rest of the main characters. 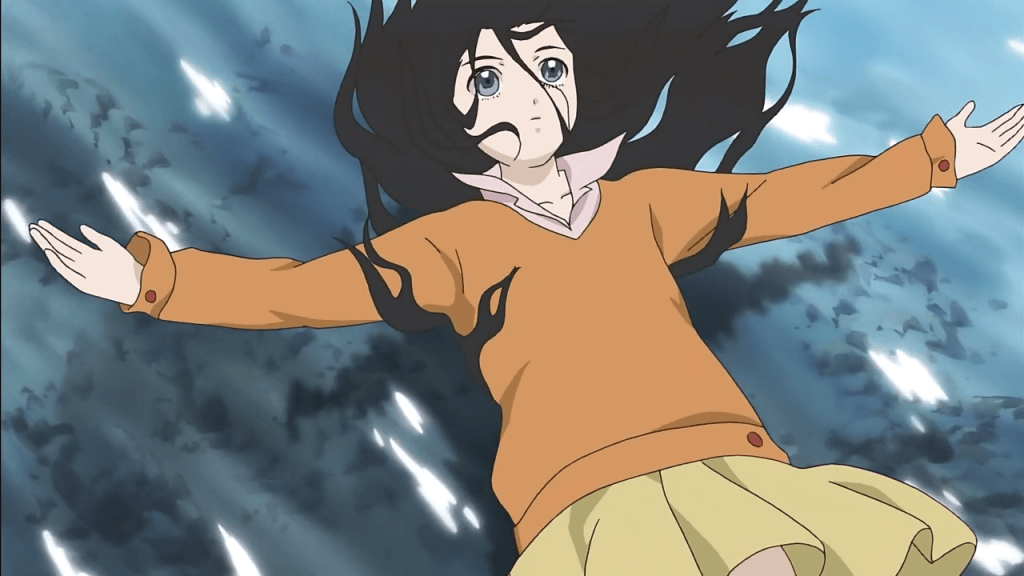 Loud and out there, Masayuki may be the new kid at school but he sure doesn’t act like it. He can’t help but putting his nose into everyone’s business, as well as breaking all the rules trying to find new kinds of fun. Masayuki left his old school because of an incident which has traumatised him. When he was at his old school he was a bully and along with lots of children he bullied one certain boy. The boy had enough of this bullying and committed suicide leaving Masayuki feeling responsible and as though he had murdered someone. Masayuki now in this new school makes a new friend as he defends him from the bullies, knowing how much harm these bullies can make upon someone. Masayuki’s father also owns a large company which seems to have something to do with these ghost like creatures that are wandering around the town.

Miyako is a quiet and mysterious girl that is able to see Taro while he is having out of body experiences. Her father owns a shrine, and being quite mature for her age she helps him with shrine duties such as exorcisms. Not only this, but Miyako seems to get possessed by Gods and therefore she worries that she isn’t truly herself anymore. It also seems that Taro has a crush on her.

Ghost hound has a great story line and I’m in love with the great supernatural and religious themes within it. On top of it, I love the way that it makes you think about the world and what is real. The sad thing about Ghost hound is it has this whole rise of excitement and then it feels as if it just ends. It doesn’t give any real good reasoning on the whole situation and it doesn’t have a satisfying end. It does have a bit of a sweet end though but I guess I felt as if it just ended too sudden. I did love this anime though, with all its great concepts and story line.