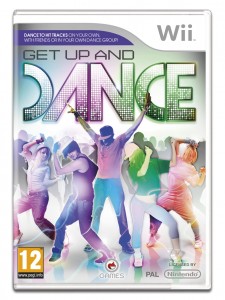 Overview:
Promoted as a game that anyone could play, regardless of age, fitness, gender and the rest, Get Up And Dance aimed to relieve people of their inhibitions by getting them up and dancing, in the process probably making a fool of themselves and/or causing injury – as comes naturally to many Wii games. Arriving just before the holiday season where relatives young and old, male and female, will be down to visit, it’s right on time for everyone to crowd around the TV and get up and dance. The only problem is, there doesn’t seem to have been any extra-special effort from Get Up And Dance to facilitate this niche and justify the game’s ownership of its title over any of its other dancing game competitors. 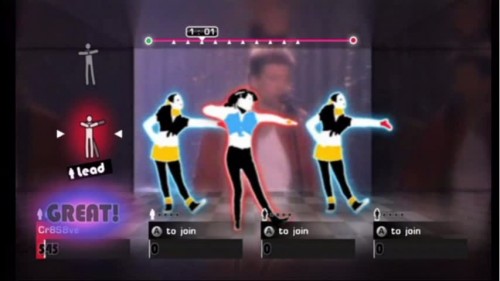 Gameplay:
The routines can be pretty complicated if you want to master them or even execute the moves correctly, and the features to teach you the choreography leave a lot to be desired. Some dance games have a great way of breaking down and slowing down routines to allow you to learn the moves and perform them accurately. Get Up And Dance does now; no explanation of moves or sequences, no choreography guide to help, just a very basic ‘Rehearse’ mode in which you can select specific sections of songs to practise. While more in-depth teaching would be contradictory of the game’s title, you can’t help but feel the back-to-basics rehearse mode doesn’t have much to offer over just repeatedly replaying a song you’re finding difficult in a normal game mode…

A normal, instant-action game mode like ‘Get Up And Dance’ mode or ‘Get Up And Party’ mode, for example. These straight forward modes are always going to be the most played part of the game. With a group of people behind you waiting for the game to start, you’ll usually jump into the first available game mode. As well as dancing to receive a score in these modes, Get Up And Party is home to a couple of extra multiplayer variants like ‘Tug of War’ and ‘Last Man Standing’. Although ultimately they have the exact same routines, it mixes it up by injecting an added sense of competition to proceedings. 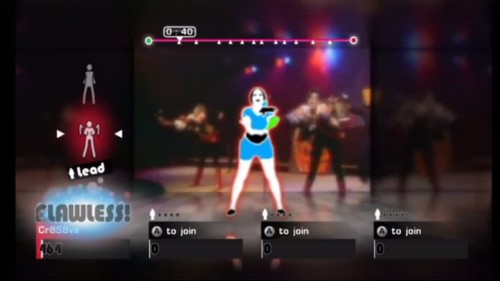 In addition, there’s Get Up And Dance Group which poses the interesting idea of a talent show to progress through. Your dancing must be good enough to avoid getting three ‘X’s from the judges and being booted from the contest. The entertainment industry seems to be obsessed with applying a competition format to everything – not only singing and dancing, but business, cooking, even hairdressing – so it’s a nice try by the developers to appeal to the mass market by acknowledging the public’s interest in talent competitions. The game’s routines can slightly alter for players when doing multiplayer, because some players inherit the role of backing dancers and have slightly different routines to follow that the lead, though still stick to the style of dance of the song.

However, it almost seems like none of this matters in the long run just because of the monotony of it all. Although not totally the game’s fault as the Wii is starting to show its age, the unresponsive controls make it hard to distinguish one routine form the next. None of the choreography is particularly memorable and it can be disheartening to go all out like you’re starring in a music video, only to look over your shoulder and find your Aunt Patty waving the remote in a circle yet yielding similar scores. Although you would only be cheating yourself if you chose to flick and shake the Wii remote at random instead of following the choreography, it’s still disappointing. At least this way everyone’s rewarded for their efforts, though. 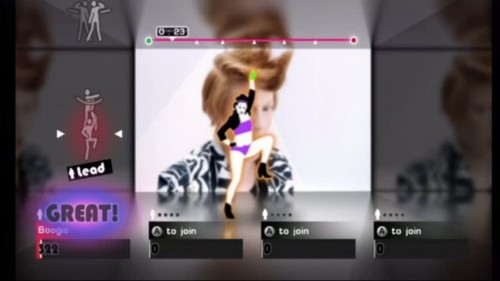 Visuals & Audio:
The setlist is mainly made up of contemporary tracks – it’s in keeping with the times, with mostly recent stuff which did well in the charts, giving it an instant and current appeal but depriving it of any lasting qualities. Perhaps it’s easier for a song to appear in a game once it’s already been in a couple previously, as there are definitely some recurring tracks here, though it is a positive that familiar, slightly older dance hits like Reel 2 Real’s ‘I Like To Move It’ are included.

The graphics carry the same neon glow design of the Just Dance games. While conveniently skirting around the Wii’s weaker visuals, it’s a design choice that doesn’t bode well considering Get Up And Dance should be trying to distinguish itself, not trying to get itself confuses with Ubisoft’s dancing series in the hope of extra sales from misled gift-buyers.