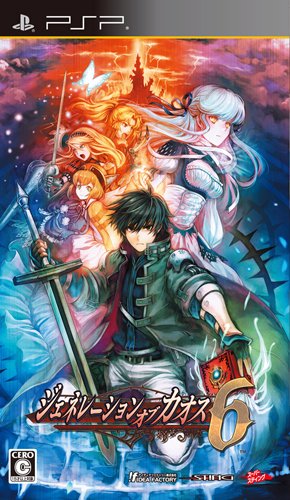 Overview
Developers Idea Factory and Sting have strong track records for creating strategy role-playing games that have been brought westward.  In a day and age where Sony’s Vita has been available to the masses for several months, one still has to wonder – was it really a good tactical move to release yet another strategy role-playing game on the PSP?  How does Generation of Chaos: Pandora’s Reflection stand on its own?  Is it the spitting image of glory or have we opened Pandora’s box?  Let’s find out.

Story
The story to Generations of Chaos: Pandora’s Reflection is one that should probably feel familiar to anyone familiar with anime.  The story of Claude and Yuri feels like a mirror of Fullmetal Alchemist‘s Elric brothers.  Claude, an alchemist, and his sister, Yuri, are wanderers, making due as they travel along the road.  Yuri suffers from a mysterious illness that manifests itself in the form of a butterfly on her neck.  She suffers from the occasional fit and, using his book of alchemy, Claude creates potions to help ease her pain.

One fateful day, Claude and Yuri stumble across a shady back alley deal going down that involves the trade of a substance known as “Snowdrops”.  A powerful alchemical substance, snowdrops are only obtainable by those wealthy enough to afford them or via the black market.  This sets the path of Claude and his sister into a whirlwind that eventually lead them across the world and into the path of several new friends as well as enemies and a much more devious plot.

Gameplay
Generations of Chaos: Pandora’s Reflection is a strategy role-playing game.  One of the unique aspects of the game compared to previous titles by Sting and Idea Factory is that it’s actually more akin to a real-time strategy game than a typical tactical role-playing game. 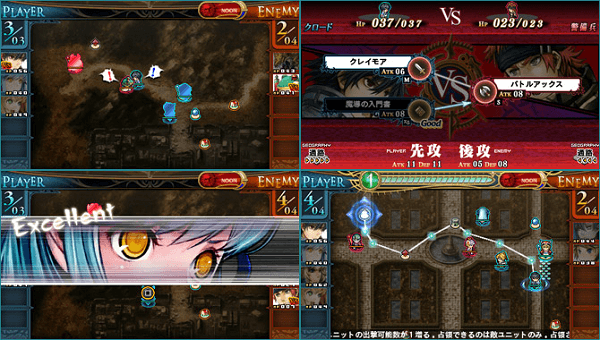 Battles all start the same way.  Each side of the conflict has a main base.  Units can be deployed from this main base.  If it’s captured by the enemy or if all of the forces are eliminated, that side loses.  Beyond that, there are army-specific unit points that allow a side to dispatch additional troops but they’ll be destroyed if the enemy takes them over.  Strategy points are like unit points, but they’re neutral and can change hands mid-battle.  Event points allow for some extra exposition on the world or the story, or they allow you to uncover hidden items on the battlefield.  There can also be field artillery such as cannons and ballistae which can be taken over and will automatically fire in set intervals across the entire battlefield.  These all make up the various battlefields you’ll make history on.

Once you dispatch a unit and tell them where to go, their movement is carried out in real time, just like a real-time strategy game.  Movement speed is affected by the terrain they’re traversing (units move across mountain range much slower than they would a paved road, for example).  You can queue up waypoints for your units to follow as well.  This allows for a pretty considerable on-the-fly shift in strategy which can be immensely helpful in tense encounters.

When a unit gets within range of an enemy unit, a battle will occur.  The battle system is primarily your standard paper-rock-scissors combat, but it adds two additional weapon types into the mix as well.  Each battle you have will present you with the choice of which weapon for your soldier to use in that skirmish.  While it may sound a little daunting at first glance (especially with five weapon types), the game does a great job telling you which of your weapons are at an advantage or disadvantage, letting you have a more informed decision.  The advantage also dictates both damage and knock-back distance (which can give you a significant advantage if you’re scrambling to reach a certain point on the map). 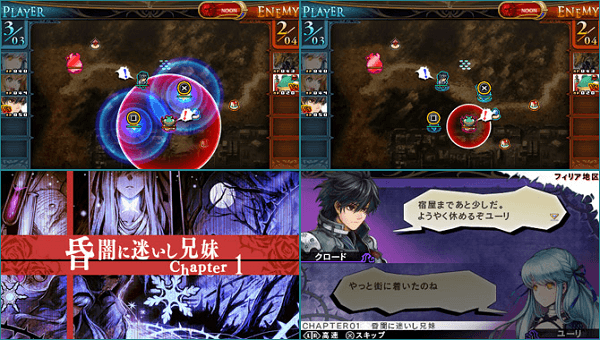 Once your weapon type is chosen, the real fun begins.  Each specific type of weapon has its own particular real-time mini-event that can earn you extra damage if you time it properly.  A sword may give you a few timed presses on a single line where a dagger is several hits across multiple lines, or an axe or scythe attack in a large arc.  Timing the attacks lets the player feel like they have a direct impact on the combat at hand instead of just ordering troops around the battlefield.

When a battle ends and units are finished being knocked back, an opportunity circle will pop up around your enemy.  Any teammates you have inside that circle will also get a chance to attack (without having to defend a counterattack) and keep the chain going.  This is known as a Chaos Attack and it will let you really rack up some damage on particularly tough enemies if you position your troops correctly.

Beyond simply attacking, defending, and taking over structures on the battlefield, you’ll eventually earn the ability to utilize different summons in the game.  When you attack enemies, they’ll drop crystals.  Pick up enough crystals, and you’ll fill your summon gauge.  The gauge can be filled up to three times and will allow Claude to summon different beings to the field that have various effects – everything from stunning opponents to destroying enemy structures to healing your troops and more. This gives you more incentive to utilize Chaos Attacks, as each additional blow will net you more crystals for your summons.  Claude will earn more summons as he levels up as well. 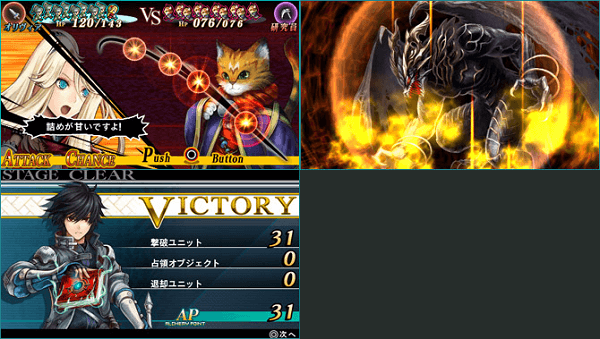 When a mission is complete, units are rewarded with alchemy points (AP) they’ve earned and, in the case of a story mission, an MVP will be declared and awarded permanent bonuses.  Between battles, though, a whole new layer of strategy is given to the player.  Here, you can equip your units with the various armors and other spoils of war they’ve earned.  You can also spend your alchemy points to evolve and boost your weapons (such as a pistol to a stun-gun, to a shotgun, to a rifle, and so on).  You can also choose to give your AP directly to a character to level them up quicker.  If you’re the kind of player that likes to grind and ensure you’ve got an advantage in the upcoming battles, you can choose to replay your most recent battle over and over again to earn more gear, levels, and AP for your party.

Visuals
Generation of Chaos: Pandora’s Reflection is visually a beautiful game.  Each of the characters are shown by gorgeous hand-drawn anime representations of themselves.  The battlefields are bright and colorful.  Characters display emotion as they’re affected in both the story and in combat on the field.

Though the on-the-field characters and buildings look somewhat simple, the execution is spot on and everything is conveyed simply and concisely.  It’s also a nice touch to watch the icon for each weapon actually change with each upgrade. Combat animations are sharp and the real-time aspect of individual battles feels fluid and responsive.

Audio
The game’s soundtrack is comprised of wonderful orchestral compositions with uptempo beats that help keep you pressing forward in battle.  The game’s voice over work is done completely in Japanese, so those of us that can’t understand the language will have to rely on the subtitles to drive the narrative, but the voice actors do an excellent job clearly conveying the emotion, so players can get a real feel for the scene taking place before them.  Given that the game is fairly menu-driven, it’s good that menu actions are well represented with sound.  Other sound effects help give the shots of combat or the dropped crystals some real audible weight.

Overall
Generation of Chaos: Pandora’s Reflection is a mouthful of a name for a game, but each of the thirteen syllables is backed by a fantastic strategy roleplaying game.  Though the combat has a lot of elements to it, in real-time it’s quick and fun, allowing tacticians to stretch their brain a bit and have a great time in the process.  On top of the great combat systems, GoC:PR has gorgeous anime-styled graphics with vibrant, fluid animations, a catchy, enjoyable soundtrack, and emotionally charged voice work.  Wrap all of that up in a well told story, and you’ve got a great game to sit down and enjoy for many hours.