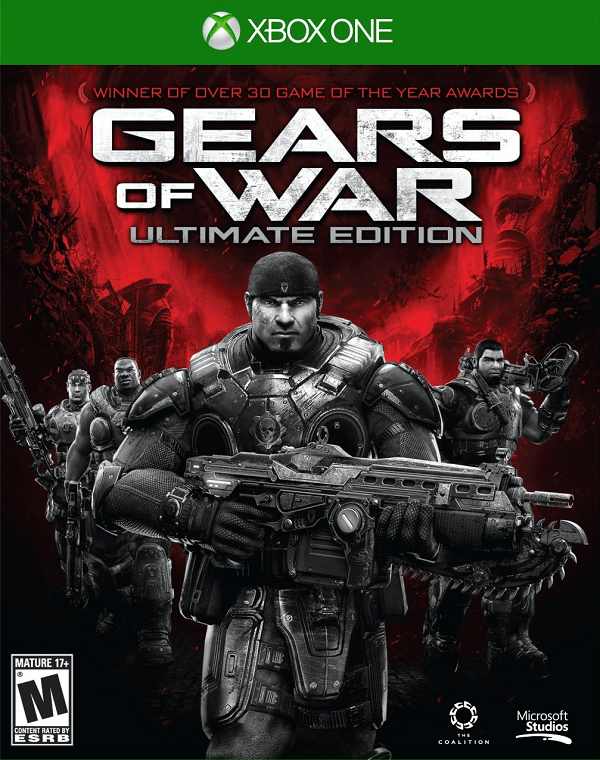 Overview
Thinking back, it is almost hard to believe that the original Gears of War was released nearly a decade ago. The title brought new life to the third-person shooter genre by taking separate elements that weren’t precisely new and combining them into such a tight enjoyable package that numerous titles have tried to replicate that same level of success only for numerous inadequate and easily forgettable titles to ruin the concept. Now it comes down to Gears of War: Ultimate Edition to bring back the action everyone’s hoping for with a fresh coat of paint. The question is, has the title managed to age well enough to still be enjoyable in 2015?

Story
For the most part, Gears of War: Ultimate Edition tells the same story as the original game. Taking place fourteen years after Emergence Day, players control Marcus Fenix who is liberated from his prison cell after being held in jail for abandoning his post four years prior. With the Locust army pushing the COG units to the edge and the prison about to be overrun, Marcus is reinstated and joins up with his friend Dominic Santiago as part of Delta Squad. 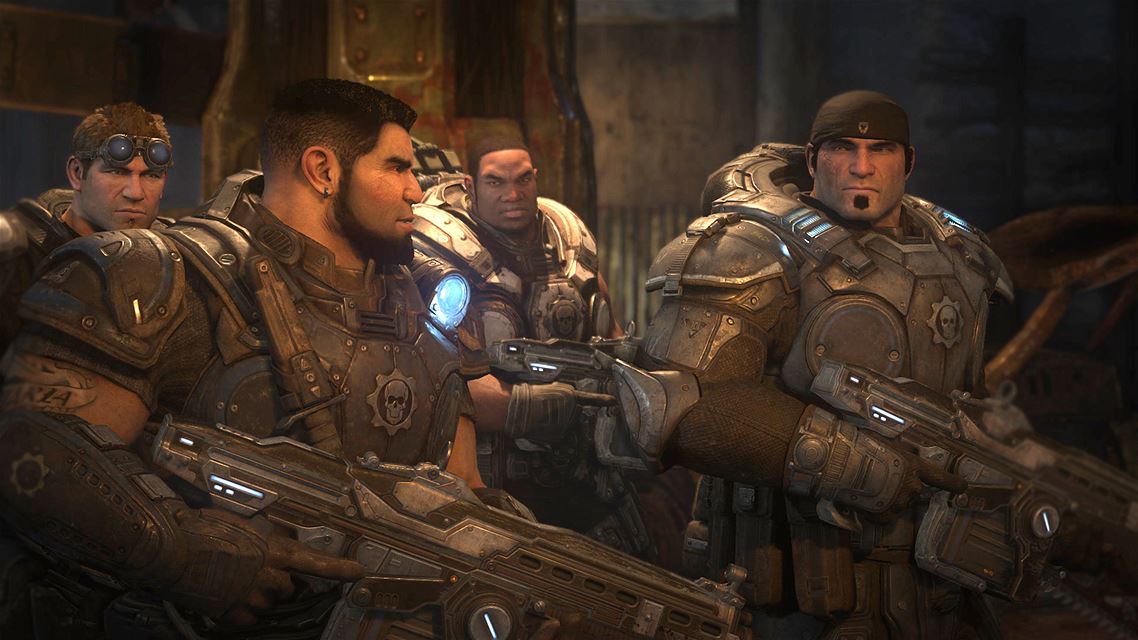 With the Locust forces threatening to annihilate what is left of humanity from Sera, Marcus, Dom, and two other members who join Delta must deliver a device to the underground tunnels that the Locust use to move around the planet in order to allow their commanders to unleash hell upon the tunnel system. Of course, no plan survives contact with the enemy and Marcus and the rest of his team must overcome a number of difficulties along the way.

The story here remains as straightforward as ever with players only ever having to make a slight decision on which path to take, with each path being only slightly different and always converging at the same spot. Characters also remain fairly straightforward as we see little development for the characters in Delta but this isn’t really too much of an issue thanks to the fact that the pacing of the story as well as the amazing set-pieces scattered throughout said story give the game an action-flick feeling that can suck away hours of your time. 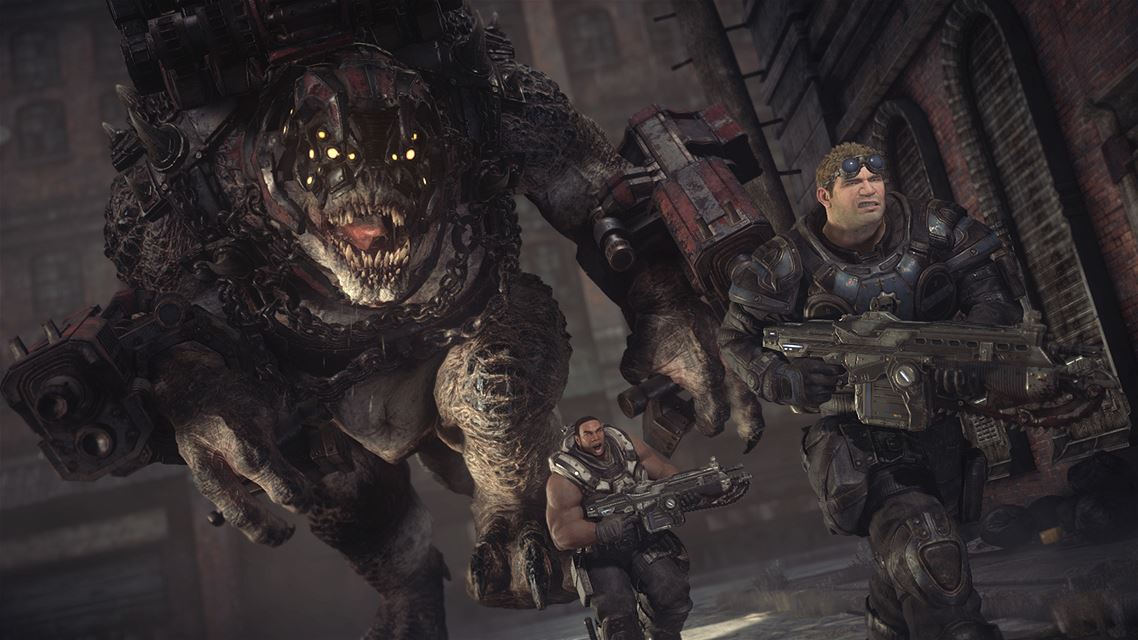 It is worth noting that since this is Gears of War: Ultimate Edition, those who only ever played the original Xbox 360 release will find that the story has been expanded a bit as there are now five extra chapters added into the game which were previously only available in the PC release. While these chapters really don’t offer too much extra narrative, they do add some extra gameplay to head through as well as a very enjoyable boss battle to help spice things up from the fairly standard boss battles already scattered throughout the game.

Gameplay
For better or worse, Gears of War: Ultimate Edition has managed to retain everything about the first title with the only real changes appearing to be a far more fluid navigation system allowing for easier cover-swapping than ever before since the original title occasionally stuck the player to a piece of cover that may have left them exposed and a bit more refined online mode. 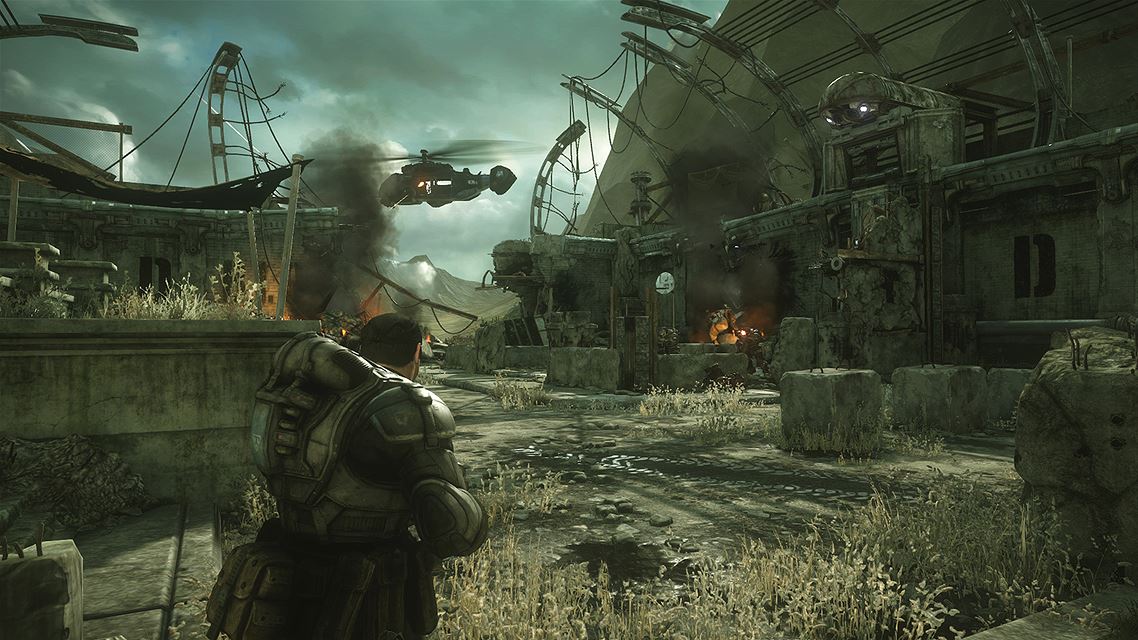 That is far from a negative however, as the original gameplay mechanics from the first Gears of War still hold up amazingly well today with the combat being as enjoyable as ever. Players will spend most of their time traveling through each level encountering a number of enemies at given points (usually whenever there happen to be chest high walls in the vicinity) and then taking them out however they wish. It is worth noting that this title only features the same type of weaponry and combat mechanics found in the first Gears of War meaning that certain weaponry fans may have grown used to using in the second and third title are not available here just like various mechanics such as meatshields are also not included as this simply is a remastered but not really enhanced version of the original game.

Instead we still have the standard trustworthy Lancer, with a satisfyingly gory chainsaw still attached, and Hammerburst as your two most standard weapons with the ever devastating Gnasher meant to eliminate enemies in close quarters with special weaponry such as sniper rifles, boomshots, and torque bows scattered throughout the game’s later levels. Each of these weapons handles well in the campaign mode and the ever enjoyable “Active Reload” system that allows players to not only reload quicker but also possibly receive a temporary damage boost at the risk of jamming the gun makes a standard mundane task one that heightens the tension of most firefights. 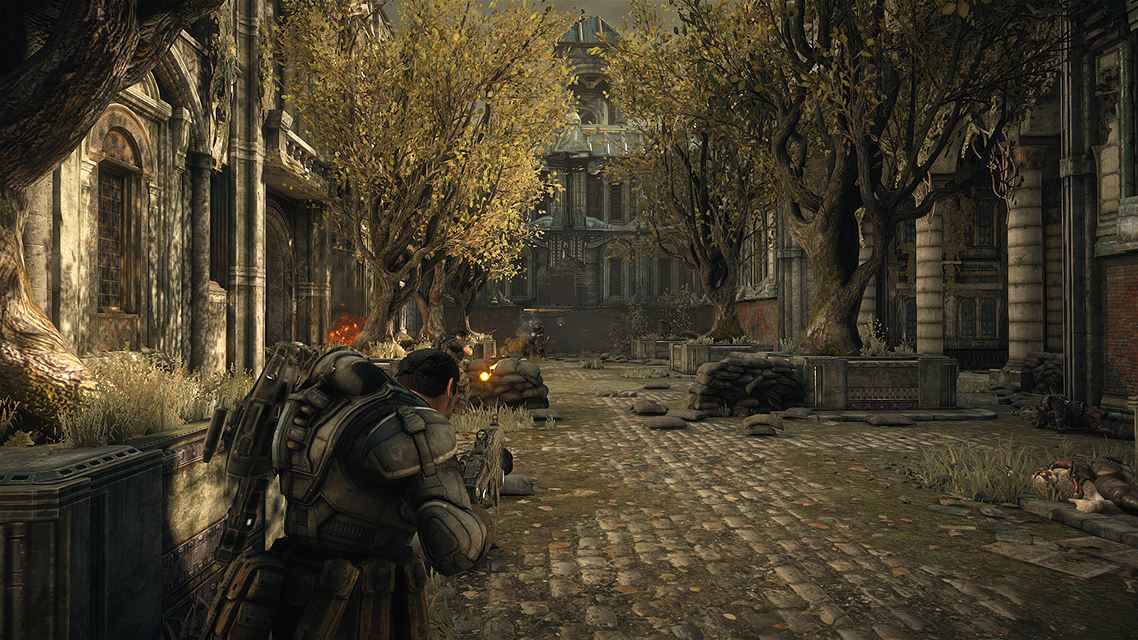 Unfortunately that roughly sums up the total of what players will be doing in the game as there is very little variation outside of shooting enemies whenever they appear and tossing grenades at emergence holes to put a quick end to a battle. There are a few times that the formula is changed a bit but these are hit and miss, with a segment requiring the player to carefully navigate and illuminate dark roads to avoid instant death adding some extra fun to the game while a poorly handled driving segment simply feels like a poor way to change things up.

As far as the multiplayer goes, fans will be happy to know that Gears of War: Ultimate Edition features the best section available here. With gameplay that runs smoother than the campaign (60 fps instead of 30) players will be able to battle across nineteen different multiplayer maps in eight different gameplay modes. It is worth noting that all of the post-launch DLC for the original game is included in this release while a few extra game modes have been added in including the more recent Team Deathmatch to go alongside standard modes of Warzone, Execution, Annex, and others. 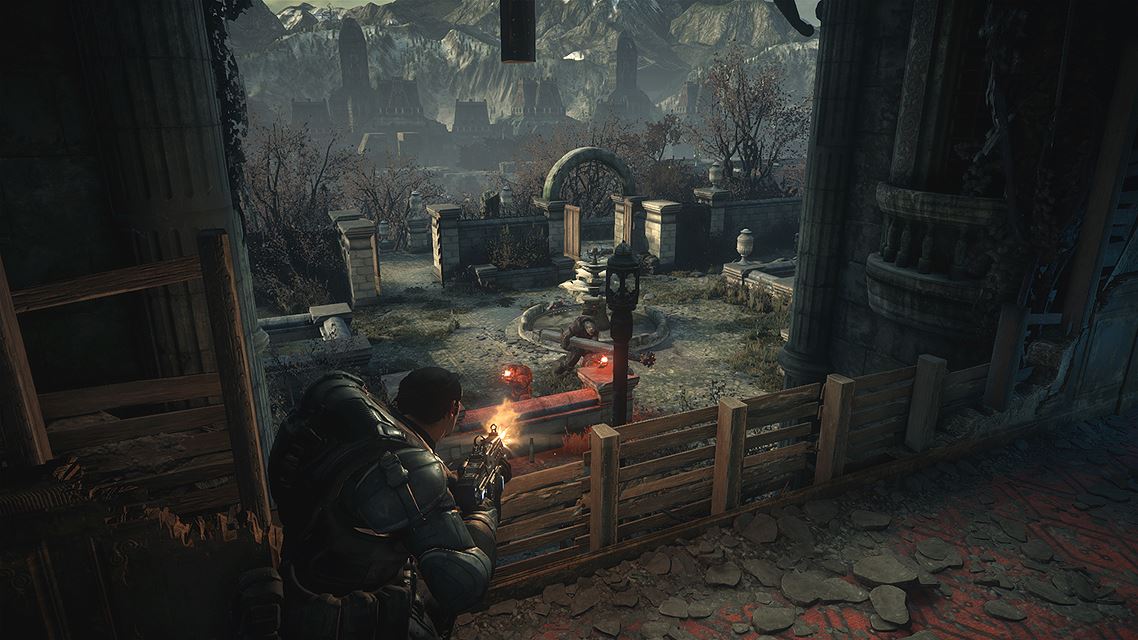 The battlefields are as enjoyable as ever with a great deal of focus spent on balancing things out with players being able to collect various weapons on the field. That being said, the Gnasher still continues to be an overly used weapon that can lead to some rather uninspiring combat sequences with characters rolling around in circles trying to get a clean shot off. Even with this still being something of an issue, Ultimate Edition’s multiplayer mode is still incredibly fun and it really shines with very little lag, tons of customization allowing players to change the skins of their weaponry as well as the character model they bring into battle as they grow in level by participating in matches that can either be simple Player Matches or Ranked Matches that end up giving more experience points.

Visuals & Audio
Looking at Gears of War: Ultimate Edition makes it difficult to believe that the original game was released nine years ago. An amazing amount of effort has been put into painstakingly remaking almost every area of the game to look as extravagant as possible. Not only have the stages in the campaign been upgraded to feature spectacular lighting effects and levels of detail on the textures but even the basic character models have been given an impressive improvement to look as good as modern games. By keeping the campaign locked to a solid 30 fps there is never any sign of stutter in any of the fancy looking cutscenes and you can expect the gore to be quite heavy as sawing through an enemy with the Lancer has never been as satisfying as it is now. The same thing can be said in regards to the nineteen multiplayer stages, all of which have been given graphical enhancements to fit in with the modern day and now run at double the pace of the classic game ensuring fluid firefights. 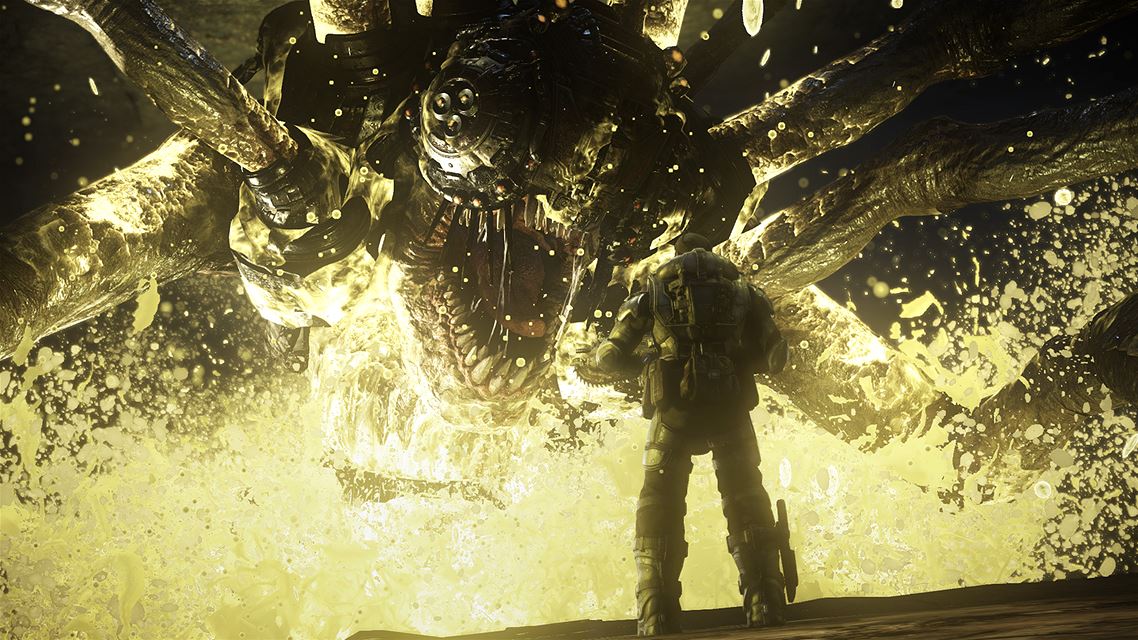 It is worth noting that while the graphics have been given a major improvement, that the development team at The Coalition decided to retain the game’s original voice acting as well as the original soundtrack. This isn’t much of an issue as the voice work wasn’t exactly spectacular to begin with but fit the gruff nature of the characters while the soundtrack is something that fans would want to leave untouched.

Overall
Gears of War: Ultimate Edition brings everything that established the franchise as a headline title for Microsoft back in a major way. Although it doesn’t really feature all that many additions to the core gameplay from the original game; with amazing looking graphics, solid enjoyable gunplay, and an extremely fun and varied multiplayer mode on display, this Ultimate Edition serves as a great reminder of just how great the original title was for fans and brings the best possible experience for those who have yet to touch the original title.