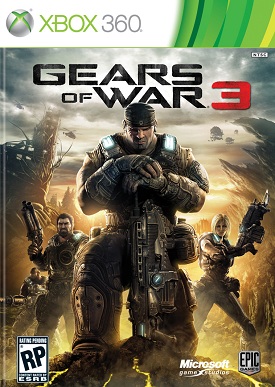 Overview:
Ever since Gears of War 3 was released a few months ago we have seen a number of pieces of DLC for the title. Nearly all of the DLC has been for weapon skins, but there was a multiplayer piece of DLC which added multiple maps to the experience. It is quite surprising however, that Epic is releasing a piece of campaign DLC so quickly after the release of the title, at least compared to the year long wait for Gears of War 2 campaign DLC. Now we have Gears of War 3: RAAM’s Shadow which provides a whole new chapter in the Gears of War series. How does it fair?

Story:
We’ve all seen the end of the Gears of War storyline… but what about what happened before Delta Squad entered the fray and Marcus Fenix became the headline man of the Gears of War series. Well while Marcus was sitting in jail before the events of Gears of War 1, other COGs were fighting a losing battle against the Locust swarm. Players will jump into the boots of Michael Barrick the leader of the Zeta squad who is joined by Lt. Minh Young Kim, Tai Kaliso and Alicia Valera. 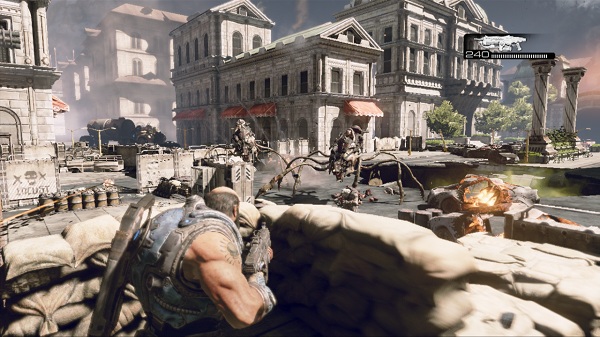 While Minh Young Kim and Tai Kaliso may be familiar with most Gears of War fans, Alicia Valera is brand new to this piece of DLC and to the Gears series while Michael Barrick is actually known from the Gears of War comic book series. Zeta squad has been tasked to evacuate civilians from Ilima City and to try and protect them against the various Locusts and get them out of there before the Locus Kryll storm turns the city into a graveyard.

Myrrah on the other hand, wants to eliminate every human occupying the city and murder them by any means necessary. As such she has sent forth an elite squad of Locusts headed by General RAAM to bring forth Seeder artillery to fill the sky with ink and bring about the death of the humans via the Kryll storm even faster.

In RAAM’s Shadow we are given our first taste into how the Locust Queen Myrrah issues her commands to the soldiers as well as how powerful RAAM himself was. Unfortunately that is the only real interesting bit of the story we see in this DLC. Out of all of the characters in Zeta Squad, not a single one of them sees any type of character development nor do they see much characterization even outside of soldiers. 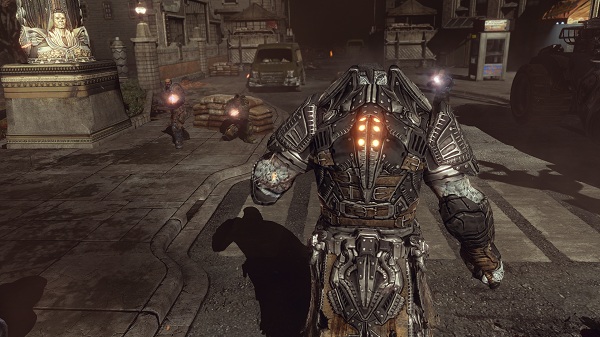 Sure there is a very minor amount of development, but it simply turns out to be non-consequential by the end of the story and ultimately feels like a waste of time. While it is great to see more story for the series rather than multiplayer DLC, this additional content simply feels like a waste of time as it does barely anything to expand the player’s knowledge or experience in the series. To make things a bit worse, the game attempts to be dramatic a few times, especially in the first minute of the story nearly all drama is useless thanks to practically no character development. Trying to make players feel something for characters that say around a minutes worth of dialogue throughout the entire story simply doesn’t work.

Visuals:
One thing that is interesting about this piece of DLC is that it takes place before even Gears of War 1. What this means is that the world itself is still mostly intact and everything around you isn’t burned down, destroyed or looks like it has been abandoned for years at a time. This means as you fight through the streets of Ilima City you will be seeing what used to be a thriving city evacuated and left at the mercy of the Locust. This new look is certainly a breath of fresh air and helps make the experience seem worthwhile, especially after most of the environments that were experienced in Gears of War 3 were so desolate and downtrodden. 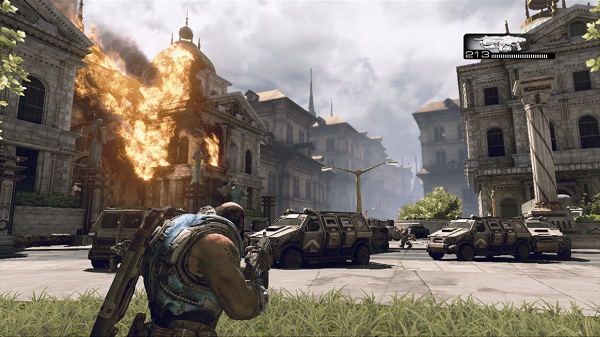 As a whole it is good to see a whole set of new characters to be played rather than the ones we have been dealt over the past three Gears of War titles. Kim and Tai both look as good as we may remember them from their past titles, though Alicia and Barrick actually have rather unique looking designs, such as a cigar hanging out of Barrick’s mouth throughout the entire campaign which will be immediately noticeable being as those are the characters played, with the co-op partner taking control of Alicia.

Audio:
Now Gears of War has always had a rather gruff sounding voice cast and that has stayed the same as always. The voice actors for Tai and Kim have reprised their roles while Alicia’s actress performs an admiral job with her lines. Barrick is the replacement for Fenix’s gravelly voice that is heard all of the time, so you won’t find anything substantially different or interesting here. Myrrah’s actress also reprises her role as well and the rest of the DLC’s score is much of the same that has already been heard before.

Gameplay:
As players step into the shoes of the Zeta team they will be given a five chapter long scenario to play through. This piece of DLC provides both the standard version of these levels as well as the arcade versions for those who feel like competing with one another. Of course the multiplayer aspect has also returned which allows four players to play on the same team as they make their way through the story which is just as enjoyable as it was throughout the Gears of War 3 campaign.

Now the only new weapon introduced for the COG soldiers turns out to not even be a new weapon at all in this DLC, but actually a different way to make use of the Hammer of Dawn. Rather than add any new or interesting weapons for the COG, we have been given the Hammer of Dawn Command Center which is a stationary piece of equipment that provides a top down view of a certain section of the battlefield to eliminate the Locust. 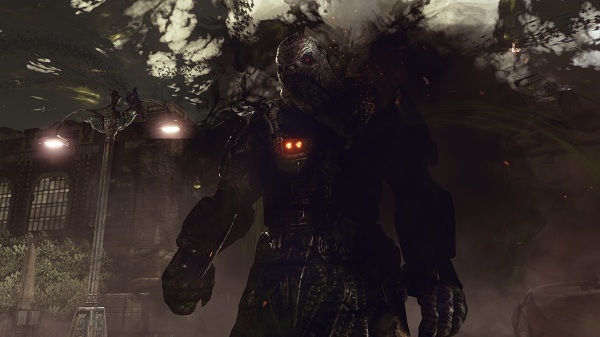 While the COG receive a completely anemic weaponry addition, the highlight of this DLC is playing as none other than General RAAM himself. RAAM is a slow and practically unstoppable force on the battlefield and players can finally wield his abilities to eliminate countless faceless COG soldiers. RAAM moves around with a full Kryll swarm shield that is only dispersed whenever you send it out to tear apart COG soldiers into bloody messes or whenever an explosion occurs near them.

The Kryll are a brutal weapon that is absolutely devastating, but his other weapon is his a very wicked looking blade that is carried in his left hand. This blade can be used for simple melee that will likely kill any COG it hits, or can be held down to perform the same action as a bayonet charge. The sound for the charge is even the same as the bayonet which is unfortunate and the animation for the stab is almost the same exact thing except with more brutality as RAAM runs them through with one hand and flings them aside.

Unfortunately that is all there really is added gameplay wise to the story part of the DLC. Those who are interested in playing plenty of multiplayer will see that every gun you can use in multiplayer can now be equipped with a Chocolate skin. This is a neat little skin but is completely static in appearance and looks like a mix between dark chocolate and milk chocolate. Besides that there are also new skins for the multiplayer mode in versus mode, four COG skins and two Locust skins. The four skins for the COG is of course each of the Zeta squad members and the two Locus skins are the big man himself General RAAM and Theron Elite. 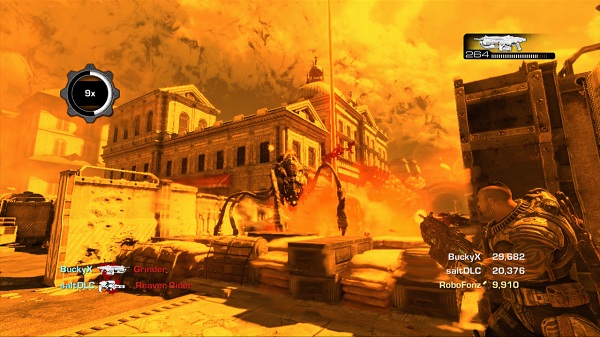 The enemy and allied AI seems to follow the exact same structure as it did in the Gears of War 3 campaign mode, though I experienced a number of new issues that emerged with this piece of DLC. Whenever an E-hole popped open and locust would crawl out, there are a number of times that they will simply fall back into that same hole and die. This is especially true with the ally AI as I experienced a number of mission failures due to an AI partner stumbling into a hole and dying with nothing even near them.

Overall:
All in all Gears of War 3: RAAM’s Shadow gives us all the power of RAAM but unfortunately we have only a minimal amount of time to take advantage of his power as the balance between COG and RAAM gameplay time is 75% COG and 25% RAAM. As a whole the DLC fails to actually add much storyline or even draw any emotion out of the player with its lackluster story content and story run through time of around three hours it doesn’t quite live up to its 1200 MSP price tag. Still, those looking for more Gears of War action can’t go wrong nor can those who are looking for new skins in multiplayer.