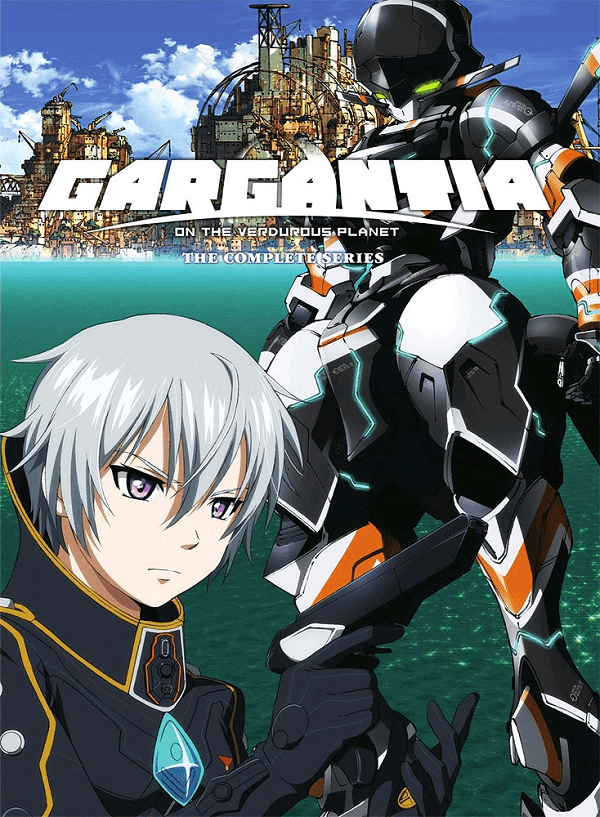 Overview
There are many big names in Japan’s anime industry, but few writers are known for having a style that is so easily recognizable as Gen Urobuchi. Nicknamed “Urobutcher” due to his tendency for writing dark plot twists usually resulting in death or torture, his attachment to the 2013 anime series Gargantia on the Verdurous Planet led many people to believe that such a twist would be on the way. So now that Viz Media has released the series in English, should anime fans follow the story of Gargantia?

Story
In the far off future, humanity has formed the Galactic Allaince and is fighting for its survival against a race of alien creatures called the Hideauze. These squid-like beings can survive in space with no effort while humanity is struggling to stay alive and find itself a home. As such, every member of humanity is forced to battle against the Hideauze threat and we join sixteen year old Ledo as he takes part in a massive operation inside of a highly advanced Machine Caliber (mech) where he is assisted by an advanced AI named Chamber. 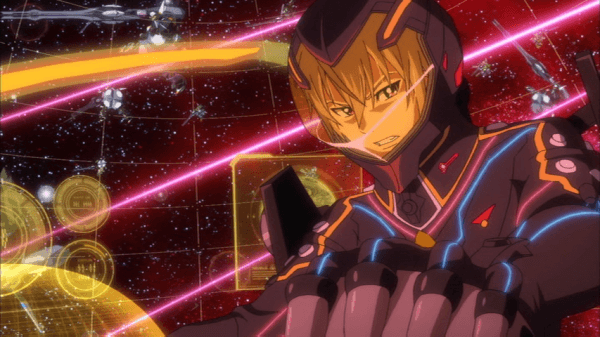 Despite the best efforts of the Galactic Alliance, the mission is a failure and while trying to retreat, Ledo is unable to properly escape through a wormhole in space and is instead flung to the far reaches of the galaxy. Six months pass and he is alerted by Chamber that they have been found by a group of humans that appear to be a wandering tribe to Ledo at first, as he does not recognize their language nor do they seem to have any technological understanding of what Chamber actually is.

In an effort to try and escape from his current situation, Ledo ends up taking a young girl hostage and flees throughout the building, only to exit and find himself standing outside in a world covered by water. Surprised that this is not a space ship but an actual ship, Chamber reveals that this planet may just be Earth, humanity’s long abandoned home world that was supposed to be covered entirely by ice. Knowing only war and far away from everything he knew and any help from those he used to fight alongside, Ledo decides that trying to work with these new people is the best way to survive and it just so happen that the girl he took hostage, Amy, is more than willing to help him out. 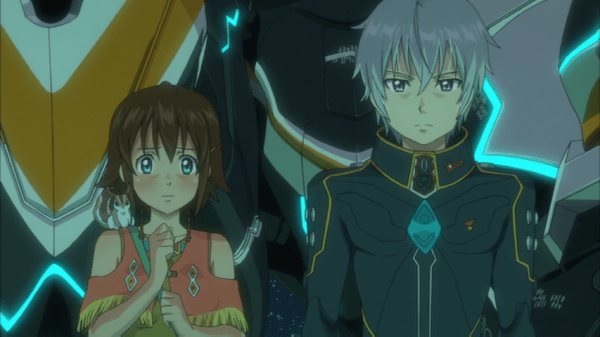 The whole stranger in a strange land and battle-hardened soldier in a peaceful time aspects are handled extremely well in Gargantia on the Verdurous Planet. Not only does a language barrier exist over the first half of the series, with Ledo requiring Chamber to translate everything and even Chamber having issues at times, but Ledo’s ideology also clashes with that of the mostly peaceful residents of Gargantia. Where Ledo has always been trained to kill enemies and anyone who is infirm or diseased is abandoned, this new world is one where people generally only threaten one another and they embrace those who are sick. Even the idea of family appears as a useless concept to Ledo and watching him learn more about this society and adapt to it over the course of the series makes for an entertaining slice of life aspect.

This slice of life style only lasts for so long however until it is revealed that the Hideauze threat may not be as far away as previously thought. After confronting a creature seen as sacred to the people of Gargantia, the series takes a dramatic turn and sends Ledo down a path where he begins to learn the truth behind the war that he was fighting. These revelations continue throughout the last few episodes of the series as numerous twists, one of which are laughably predictable, are thrown into the storyline to try and wrap up the story in an unfortunately clunky manner that disrupts the rather enjoyable flow the series benefited from early on and will leave many viewers unsatisfied. 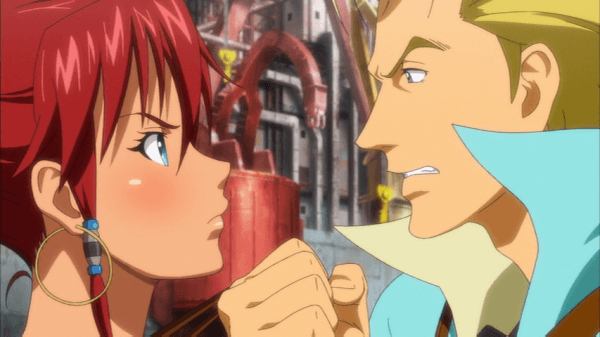 Given the length of the series, Gargantia on the Verdurous Planet tells an interesting and enjoyable storyline. It starts out as a slice of life series that sees Ledo adapting to his new life and experiencing different sensations that he never felt before while near the end it becomes a story that explores what happens when different cultures and political ideas collide with one another and what it really means to be human.

There are some aspects of the series that tend to be a bit strange, such as a very fan service heavy episode involving seductive dancing from the female cast, including Amy who is first introduced as a spunky girl but ultimately becomes little more than Ledo’s love interest. This becomes something of an issue throughout the series as we are introduced to numerous characters but only a handful are given any actual development. Perhaps this makes the series’ relatively short length given the scope of the story is its biggest limitation, as there is clearly so much more potential to be tapped here.

Visuals
Gargantia on the Verdurous Planet is a series that we declared one of the best looking of 2013 and it clearly deserves that honor, especially now that it has been given a home video release. Despite being a series that takes place primarily on a rusted ship on the ocean, everything is gorgeously colored. The ships and interiors are packed with detail to help make everything look realistic and the battles, the few that there are, are beautifully animated. 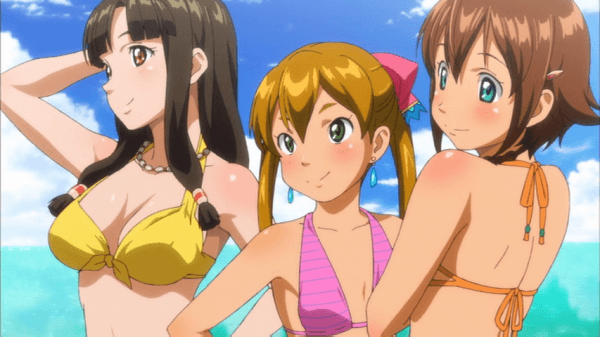 The CG used in designing Chamber is woven into the rest of the animation perfectly making the mech look like it is supposed to be there despite featuring a completely different art style. As for the character designs, they are quite fitting considering the nature of the series, including the albino look of Ledo who has only fought in space and the tanned look of most of the characters on Gargantia. It is also worth noting that, as mentioned before, there are a few doses of fan service worked into the series from time to time, usually through Amy and her two friends, but one dance sequence in particular is animated excellently in order to introduce a new element that Ledo is still unfamiliar with.

Audio
With the release of Gargantia on the Verdurous Planet, Viz Media has included their own English dub to accompany the standard Japanese voice track. Considering the nature of the series and the language barrier, they handled the dub extremely well. Viewers will only ever be able to understand the side of the language the camera is focusing on while the other side will be unidentifiable until it is translated by Chamber. As for the actors themselves, the voice acting in the English dub works quite well and in the case of Chamber’s AI voice, it is an improvement over the Japanese casting. 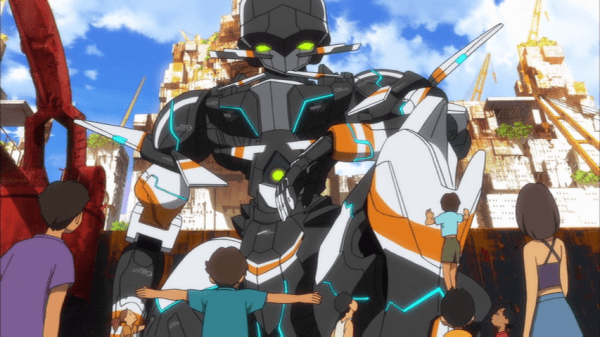 As for the background music of the series, it simply works as intended and nothing more. Rarely does there ever come a tune that is memorable in any way and it tends to fade from memory very quickly. Unfortunately the same can be said regarding the opening and ending themes for Gargantia on the Verdurous Planet, as both the opening “Kono Sekai wa Bokura wo Matteita” by Minori Chihara and ending theme “Sora to Kimi no Message” by ChouCho are unremarkable even if they fit the relatively calming tone of the series.

Extras
This release of Gargantia on the Verdurous Planet comes with a handful of bonus features. First the release is contained in a standard slipcase while the discs themselves feature clean versions of the opening and ending themes, promotional videos for the series, trailers for other Viz anime, and two OVAs that have been given English dubs. 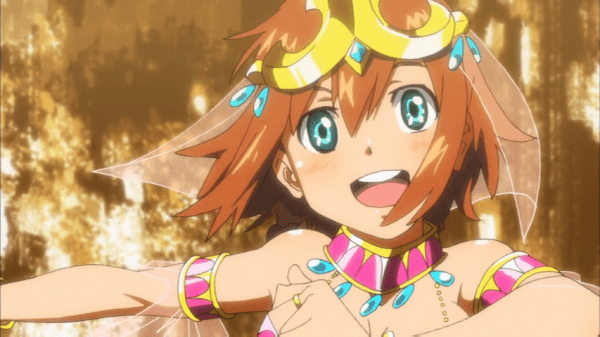 These two OVAs shift the focus away from Ledo and instead direct it towards the supporting cast instead as the first OVA reveals more about Ridget’s past while the other offers us a look at how a certain character handles his own situation when arriving on Earth.

Overall
With some amazing animation and artwork and an enjoyable premise populated by a likable cast, Gargantia on the Verdurous Planet is a fun series that starts out strong and begins to sputter near the end as it tells a tale that shifts tone and loses parts of itself three quarters of the way through. This doesn’t make the series a bad one by any means, but merely one that could easily have been that much better if handled differently or given more room to develop.