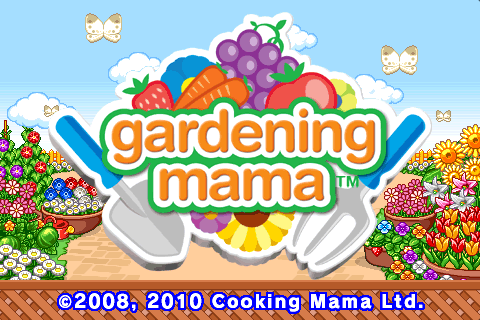 Overview:
First we cooked our butts off with Cooking Mama, and now Mama has stepped outside into the garden and invited us to join her in Gardening Mama. Cooking Mama established a strong front into solid mini-game gameplay that gave players an enjoyable time waster involving cooking food. But does gardening truly hold the same appeal?

Graphics:
Gardening Mama retains its cartoonish and easily recognizable graphics that we have seen before. The various plants that you take care of each look as if they would in real life, only with bright colors and a cartoonish overlay that keeps gameplay interesting. The plants roughly start out the same looking, but quickly start to be distinguishable even as small sprouts or saplings.

In this version Mama is slightly customizable in appearance thanks to the bonus system. I will get into more detail in the gameplay segment, but the various pieces of clothing you unlock don’t change her appearance well enough that they are truly rewarding. Rather unlocking a piece of clothing seems to simply be a reward to place on Mama once, and then not bother with again.

Gamplay:
Gardening Mama places players outside of Mama’s house inside of her garden which features a different orchard or planting area for each type of plant you will be growing. There is a fruit garden, vegetable garden, flower patch, and even more. Most areas will have a handful of different plants in each area that show their growth as you advance them along. Though plants are only unlocked as you grow the starting plants but that is the standard.

Players are given very little instruction as to what they are supposed to be doing. Sure there is a practice mode for each plant which gives them the option to practice any set task involved in that stage of growing the plant but it wouldn’t hurt to have some sort of introductory tutorial for new players just in case they don’t have prior knowledge of Mama’s ways. 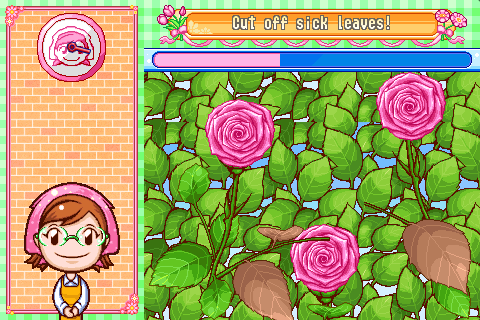 The minigames themselves are enjoyable but not extremely varied. There are a handful which are repeated for practically every single plant you will be able to plant and some of them are just ridiculous. Watering fully grown plants requires the player to trace their finger across the screen in specific patterns to create a rainbow. This is a nice addition, but seems out of place for what would be normal watering of plants.
On the flip side of that coin however there are plenty of minigames that are very enjoyable and true to life. Watering seeds or sprouts saturates the soil only so much before water starts to accumulate above ground and take a short time to seep into the ground, making it so players have to be careful that they don’t over water the plant by the above ground water reaching the roots.

The minigames themselves are rated through either a bronze medal for failure, a silver medal for achieving the task with a small amount of mistakes, or gold for a perfect. Then the finality of the process is given a rating out of a 100, which is the standard for any Mama game. Though there is a new change to this one, as each plant requires time to grow between games, meaning that you perform a small amount of tasks, before having to go to the next plant and then back and forth.

This creates an issue however as plants that, though they are already established, start to wither if they are not attended too. This means that as you unlock different plants throughout the game and want to turn your attention to your new seeds, you may have to constantly keep going back to water or trim dead leaves off of plants you finished near the start of your game.

Tasks that are performed perfectly can sometimes reward the player with a clothing item that they can accessorize Mama with. These clothes are purely cosmetic but are somewhat varied enough that the player can change her look, but are simple in design. There could have been better rewards provided for incentive, such as new unlockable modes or the ability to unlock special plants. 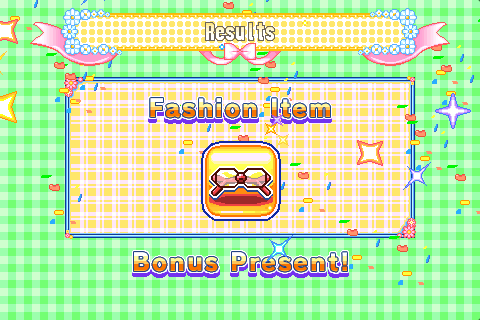 As this is an iPhone/iTouch game one may expect lots of shaking or moving around the iPhone/iTouch but this is not the case. Instead it is controlled via screen tapping or sliding of the finger to perform the tasks set before you. Though it may take away from the interactivity, it does allow Gardening Mama to be more accessible and easier to play on the go; rather than trying to tilt your phone to pour water out of a watering can.

The game itself though can turn out to be quite short, because despite having to go back to take care of certain plants that start to wither the player can fully grow their entire garden and be left with fully grown gardens, and no other modes of play beyond harvesting their plants. Or purposely letting them wither away to be planted anew.

Overall:
Gardening Mama smoothly makes the transition outside of the kitchen to the gardening. It incorporates plenty of earthy minigames that will keep players interested in it up until they grow everything possible. There are rewards for certain actions but unfortunately the rewards are clothing which some may find interesting, others may be disappointed. Gardening Mama is quite enjoyable while it lasts but could leave players with the feel that there could have been much more to the experience.