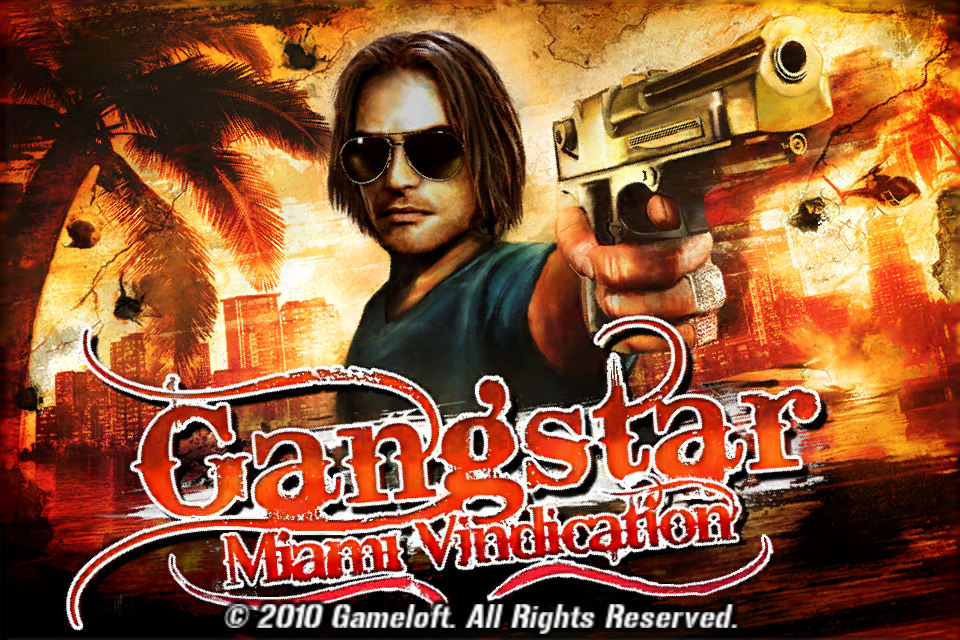 Gameloft’s Gangstar :  Miami Vindication for the Apple iPhone is the sequel to the Gangstar : West Coast Hustle which is a 3D GTA style open world crime game that has you  stepping into the shoes of Johnny a dude on a mission to find his brother Joey who’s been kidnapped by some unknown criminals.  As soon as Johnny arrives in Miami, these unknown criminals blow up his ride as to send him a message to “BACK OFF” but this only makes Johnny even more pissed and more determined to find out who has his brother and to take them down and get him back and thus our story begins.

Having played the original Gangstar : West Coast Hustle on the iPhone, I was excited to get my hands on Miami Vindication and see what improvements have been made.  The original West Coast Hustle, even though it was very impressive with its 3D open world city to explore, it just didn’t feel like it was a living and breathing world.   Unfortunately Miami Vindication has continued in its footsteps.  The city feels too empty and lifeless; there is no hustle and bustle of a busy city with streets full of cars and citizens going by their daily life.  Miami’s streets are empty with a few random cars driving around pointlessly and the same goes for the citizens, they prove no point and have no real connection to the world what so ever.  I found this quite disappointing as I wanted to feel like I was actually in the game, living and breathing it. 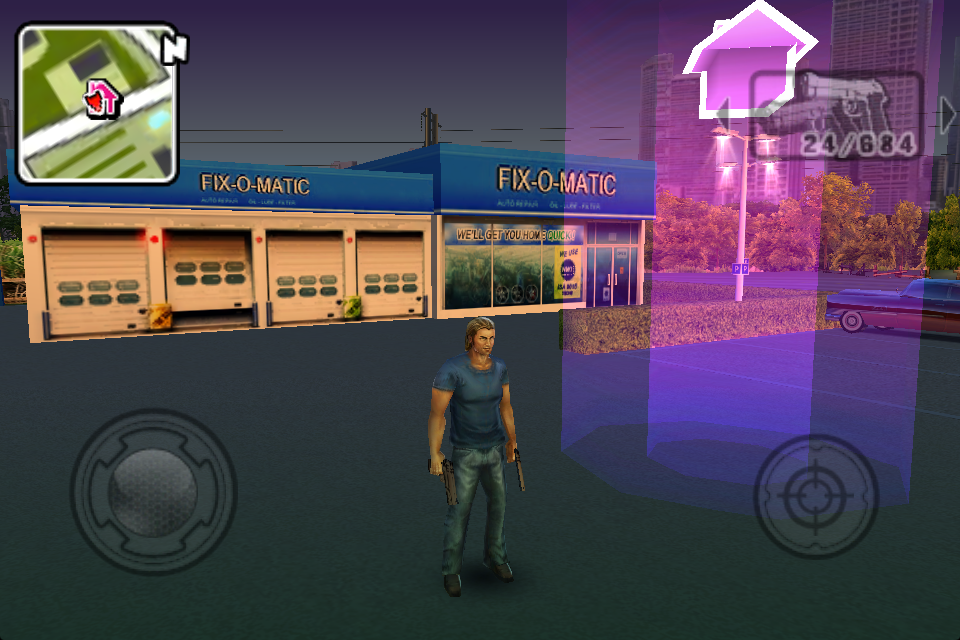 The city in Vindication is quite large for a game of this style.  Gameloft have improved the lighting and also the draw distance with being able to see buildings from further away with finer details appearing as you come closer to them.  The car and character models within the game are average, with character animations lacking in depth.  There is no lip movement when they speak between missions or cut scenes and no real detail has gone into making them look and feel life-like.  The only improvement from the original is that characters and cut-scenes now have voice overs, so instead of just reading boring old text along the bottom of the screen you can listen to them plan their next mission.

The story line and dialog in Miami Vindication is a great improvement from the original.  The missions are more entertaining and there are a lot more cool things you can do.  For example one specific mission will have you taking pictures of criminals with the use of a camera.  There are approx 75 missions that will keep you busy for hours.  You’ll enjoy stealing cars, taking part in street races, killing gang members and even hijacking a hearse with a dead body in it just to piss off the rival gangs and to take you one step closer in finding your brother. 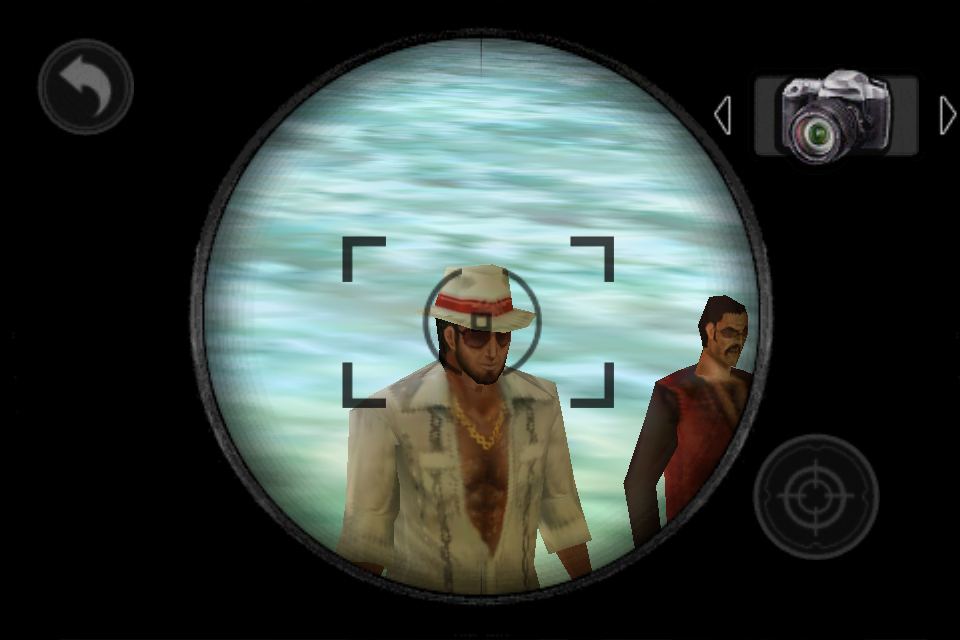 If you don’t feel like doing missions you could always drive, sail or fly around the city.  Speed boats will allow you get from one side of the map to the other quite quickly.  An open world game wouldn’t be an open world game without collecting collectables along the way.  Take for example while on a boat you can find surf boards along the coast and in very well hidden spots.  Collecting all of them will unlock an achievement, which I must say Gangstar Miami Vindication has quite a lot of and if you’re that kind of person that enjoys getting them, then this game will keep you busier a little while longer while you search every section of the map for them. 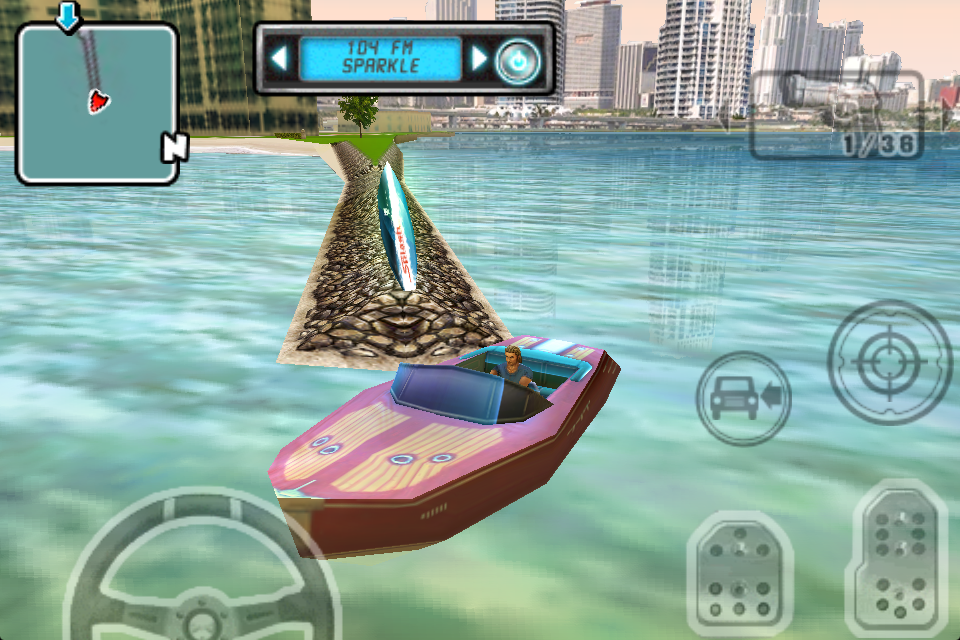 Weapons in Gangstar : Miami Vindication can be purchased from the options menu or at the ammo shops.  Starting off with your fists, you quickly gain possession of more deadlier arsenal such as baseball bats, pistols, shotguns, Molotov cocktails, grenades, SMG’s Assault Rifles, Snipers, RPG and my personal favourite the Flame Thrower (burn enough baddies with this baby boy and you’ll unlock an achievement)

What about money you say .. Well let me give you a run down in this department.  You collect money by completing missions, killing bad guys and also finding hidden silver briefcases scattered around the city.  So while you’re looking for collectables (Surf boards and Tyers) you could also pick up some extra cash along the way.  Unfortunately you can’t really do much with it.  You can’t buy houses or spend them on fine ladies in the local strip joints but once you’ve collected enough of it you’ll unlock an achievement.  Who said you couldn’t buy achievements with money.  In Gangstar you can 😉

Just like in GTA sooner or later you’re going to get into trouble with the heat and you’ll need to get away from them.  I have to say the cops in Gangstar are pretty laid back compared to cops in GTA Chinatown wars who are relentless and will not give you an inch of breathing space.  Shaking them off in Gangstar is quite simple you’ll have a star (wanted) rating.  To lower it you’ll have to drive or run around and find cop badges that are visible on the map located in the top left of your screen. Collecting enough of them lower your wanted rating to zero and you’re a free man once again. 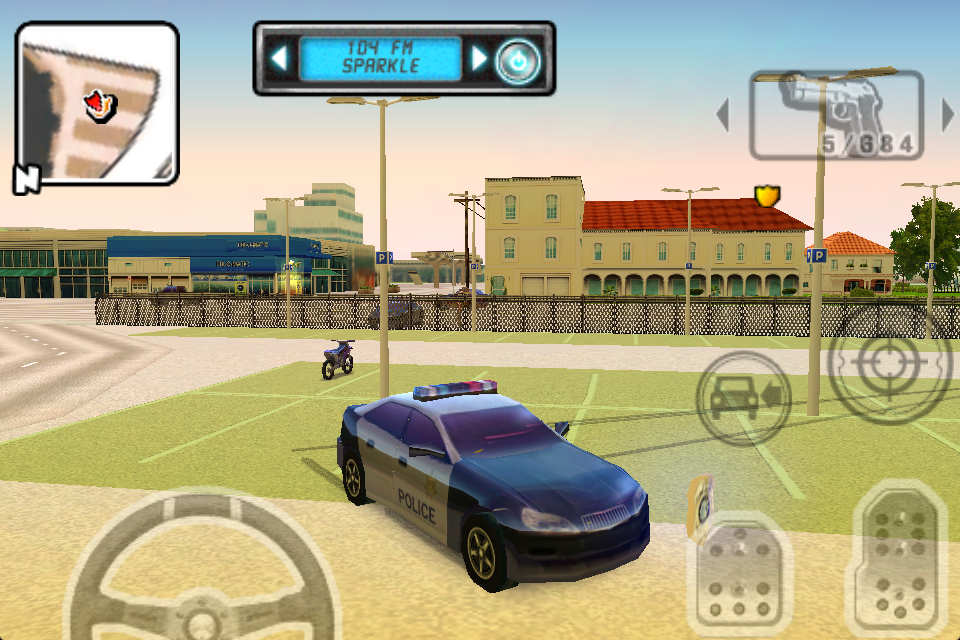 Driving and Combat :  Combat hasn’t changed much from the original.  Tapping on an enemy will target them.  Then depending on what weapon you have, all you have to do is press the fire/attack button to either punch or bludgeon them to death (baseball bat) or shoot them from a distance to end their miserable lives.   A new feature thrown into the game is cover system.  When you’re close to anything that can be used as cover (car, boxes, rocks etc.) pressing the cover button will let you go into cover and hide from bad guy bullets.  It’s quite useful and does come in handy when you’re in tricky situations. 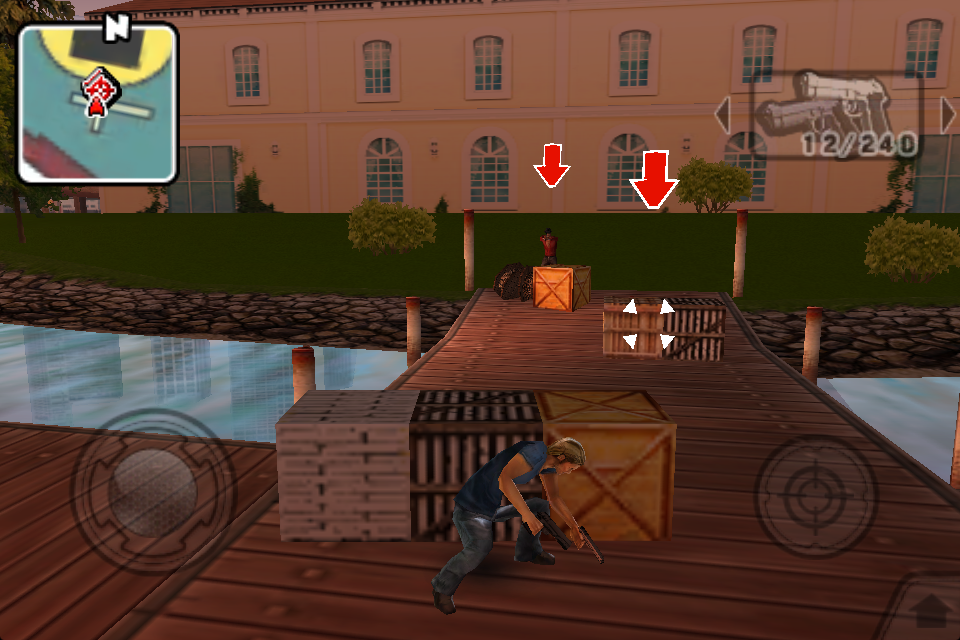 Driving does feel a little more stable from the original.  You now have three options once you’ve car jacked a car, boat or chopper.  The original Steering wheel, Slider options are fine and easy to use with the tilt being the newest addition to the control system.  Tilting will allow you to fly a chopper by leaning forward and back and also a motorbike by pulling back to do wheelies.  It’s all up to personal choice, so experiment on what you like best and then stick to it as you’ll need to master them to stand any sort of chance when taking on the more difficult missions later in the game.

One thing missing in the game is a GPS system.  Even though the game world isn’t that big, and you really can’t get lost, a simple GPS system would have been perfect to guide you from one mission to the next without have to go into the map screen every few mins, especially at the beginning of the game as you’re not sure where and how to get to certain locations.  It’s something were not used to.  We have GPS’s everywhere we go.  In our cars, on our phones and in other titles (GTA) that it would have been great to have it thrown in as well. 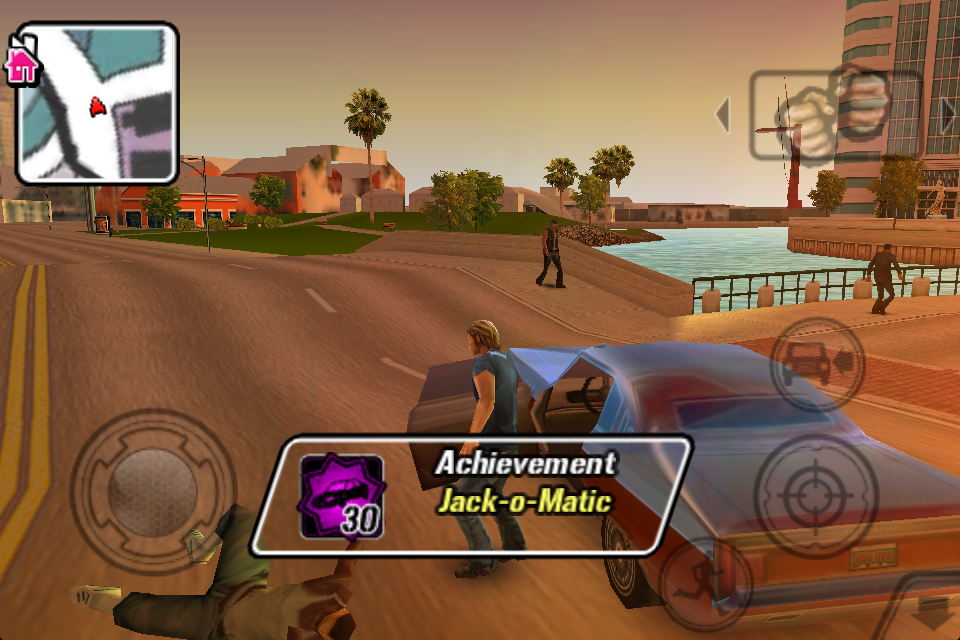 Gangstar : Miami Vindication is graphically an improvement from West Coast Hustle.  Missions are more entertaining and voice over acting is also very much welcomed. But it does lack the firepower to take down other open world games currently out at the moment.  The world is lacking life, action and crime and there isn’t enough happening to make it feel real.  No GPS, No Emails, No Phone and not enough side missions to keep you busy.  It does have collectable finding which will keep a few of you busy but there isn’t much of an incentive apart from unlocking achievements.   If you enjoy a 3D experience full of car jacking, riding around popping wheelies, surfing the waves and flying through the skies in a chopper with killing and blowing up stuff, then Gangstar Miami Vindication is for you.