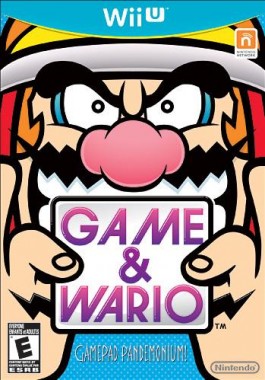 Overview
The Wii U has had a dry spell, but since E3, Nintendo have promised a good amount of first-party content to rejuvenate the system’s library. Game & Wario is the first in line out of the long list of releases into next year, and brings one of the most beloved franchises back for more mini-game fun. Instead of micro-games, this title features larger and more thought out experiences, offering up some quick entertainment that allows us to use the Gamepad in brand new ways. Does Wario bring good company in his Wii U debut? Let’s find out.

Gameplay
Since their debut back on the Game Boy Advance, the WarioWare series has always been about lightening quick action that was built around a test of reflexes. Game & Wario has the same cast as the old franchise, with Mona, Jimmy T, and several other familiar faces joining the menacing brother in creating a new game for a brand new two screened console, but is built around using the Gamepad controller in new ways. Thankfully, many of these little games prove to be more than an experimentation, as with 16 in all, there is truly something for everybody in this oddball compilation. 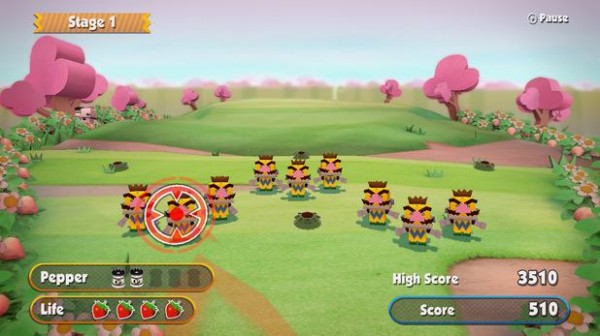 Each game varies in length and difficulty, with more challenging levels able to be unlocked after a certain requirement is met. Arrow will be the first of the lot you see, and is definitely one of the most unique to the package. In this romp, players must try to defend their strawberries from hordes of mechanized Warios. To do this, you must turn the Gamepad sideways and launch arrows at the screen by pulling them back, with the ammo flying to the television and hitting the target if the shot is done with precision. If the little guys get too close, the action will appear on the controller and the player will then need to take out an army by tapping them to death on the screen, adding a nice little mechanic that adds a slight challenge. 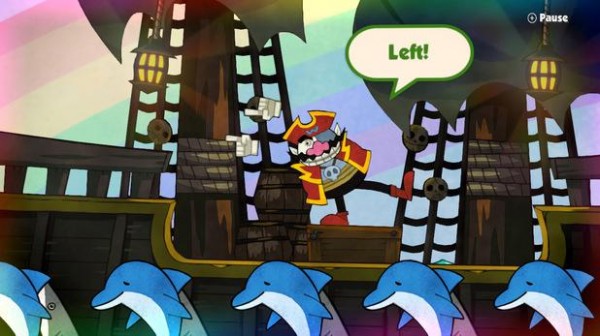 Shutter is another offering, and uses the Gamepad as a camera. In this mini-game, players are tasked with snapping photos of five criminals in a scene filled with other colorful characters, and are required to act as if their controller is a camera by pointing it at the screen. Sure, it isn’t the most well-rounded of the lot, but it does have a somewhat unique mechanic attached. Fans of rhythm titles will be pleased to know that the overlooked genre has also been shown some love, as Wario’s Pirate allows players to move the controller to the beat, shielding them from oncoming projectiles. The more basic Bowling mini-game is also enjoyable, and as you would expect, the Gamepad does well to keep the motion sensor at use, making for yet another way to play what was a fan favorite in the days of Wii Sports. 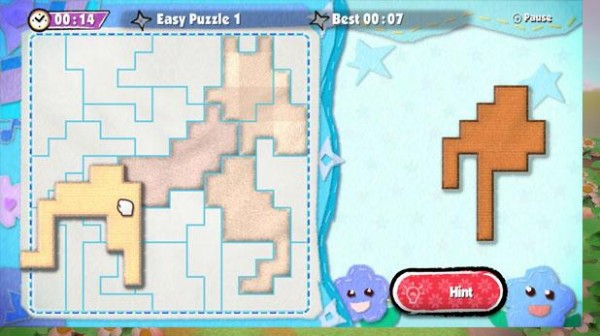 Yes, there is a lot of clever uses for the Gamepad at use, but not all are as enjoyable as the next. Games like Patchwork offer puzzle based fare that can get stale quick, and Taxi comes off as frustrating due to awkward controls, despite having a good premise. Speaking of Taxi, that brings up a good point for Game & Wario as a whole. Even though a lot of the gameplay and motion controls with the Gamepad are fluid, sometimes it is just overdone. Taxi in a way plays like a top-down Crazy Taxi. The catch is that aliens are attacking, and to shoot – the player must take their eyes off the television, tilt the controller upward, and try to aim at a target before the customer gets carried away. Its not that this is a bad idea, its just that all of the constant change is over-demanding of the player, and feels a bit forced as a result. Sure, I understand that the premise of Game & Wario is to show what the Wii U can do, but Wario games should be about fun first and foremost, and not all of these little romps have that wow factor. 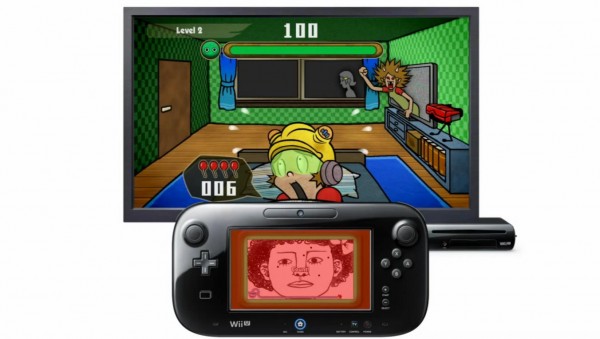 Oddly enough, it is the mini-game that represents the old WarioWare franchise that I enjoyed the most. Gamer has the player go through a good number of micro-games. The gimmick at work is that you are playing as a kid, who is hiding under the covers past his bedtime. If your mom walks in, the game is over so you must constantly watch for cues on the television in order to not get caught. Those who don’t like this constant threat will be happy to know that these are playable without the mom breaking in, but the concept alone works fantastic with the old namesake, and stands as one of the strongest offerings Game & Wario has on the disc. 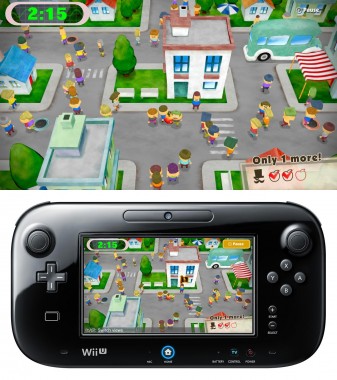 Game & Wario also makes for a pretty decent party game, as on top of the 12 single player mini-games, four multiplayer options are also available that can bring some excitement to any little get-together. Most of these have one sole player use the Gamepad, while the others wait for the controller to be passed to them in a turn-based format. There is a forgettable little Disco game and a mildly entertaining “Fronk” tossing challenge, which were not quite my thing. One title that did stand out was Fruit, which has one player take control of the Gamepad in a sea of people and swipe fruit while up to four others try to find out where that player is based on hints provided on the television. Sketch works a bit like Pictionary, and also stands up pretty well with the same kind of double screen shenanigans taking place. Just like all mini-game compilations, there are some offerings that stand stronger than others, but with the incentive to unlock more items and games by going back in for tougher challenges – it is unlikely this title will be shelved for a good time after you first put it in that Wii U.

Visuals and Audio
To be honest, it really doesn’t matter if you hate a specific game, as whether it is solid or not, Game & Wario will make sure you remember it with some charming cutscenes and awesome artwork. Bright colors run a muck with all 16 mini-games included, and the animations and joyous characters such as Wario and his flock of friends are sure to put a smile on everyone’s face who is in on the experience. No mini-game gets a worse treatment than the next when it comes to production value, and that balance makes this little compilation worth exploring until every last cutscene and piece of art is discovered. 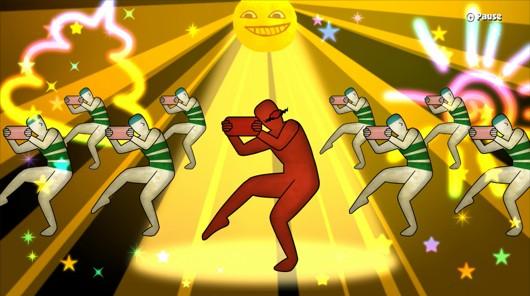 As for the soundtrack, Nintendo have yet again delivered some cheeky yet lovable beats for the evil brother. Game & Wario’s music is at its best while characters are hamming it up, singing gleeful tunes about generally nothing, and the amount of energy this little cast has behind it will be heard at the start of every single mini-game. As for sound quality in other areas, who doesn’t love that menacing laugh of Wario, the peppyness of Mona, or the smooth sounds of Jimmy T. Good music and overall production doesn’t make a game great, but Game & Wario is all about trying to find the perfect fit for all, which is done with plenty of polished variation and charms bursting out the seams during every new encounter.

Overall
Game & Wario is not going to be a stand-out release for the Wii U – and after a few hours, its clear that this title was meant to be an experimentation. Sure, its fun and has a lot to offer, but there just isn’t enough included to keep it relevant for too long. Those who are wanting something for their console that packs a massive punch in quality should pay attention to this release however, as when it comes to party games, Game & Wario knows how to smack a smirk on that face and opens a lot of doors for future releases down the road. Just like he has been doing for over a decade, Wario has been used again this time around to show off new ideas in a clever format, and those who want to impress a crowd with some off-beat comedy and genuinely fun gameplay should look no further when selecting their next title for that two-screened platform.