Game of Watchcraft: Spawn of Squishy is part of a new trend in indie gaming called the “demake.” Developers look to take popular modern titles and reimagine them as retro styled games for systems like the Nintendo Entertainment System or the Game Boy. LCDemakes looks to take the concept to the extreme by taking one of the most content heavy games, World of Warcraft, and demaking it into one of the simplest forms of video games, the LCD based Game & Watch series. No Little Johnny, this isn’t like the LCD screen on your iPad.

Being an LCD game, there is no real plot in Game of Watchcraft: Spawn of Squishy. Which really is not too much of a change from the actual World of Warcraft, since only a small fraction of World of Warcraft players actually read quest text in the first place. 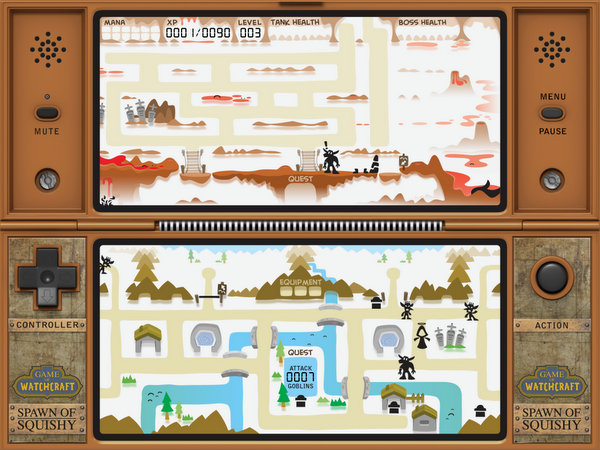 Game of Watchcraft: Spawn of Squishy looks replicates the experience of the high end dual screen Game & Watch devices that later went on to inspire the Nintendo DS. Since the iPad only has one large screen, the iPad’s gargantuan screen displays the image of the Game of Watchcraft device and provides four buttons, the D-Pad, the action button, the mute button, and the menu button. In the middle of the screen are the two game areas, each with two different quests to play.

The bottom screen equips our hero Squishy with a pair of menacing daggers as goblins and chests spawn endlessly on the screen. There are a pair of linked portals on the map that allows for quick travels from one side of the screen to the other. A quest giver is present, who will send Squishy off to either slay a number of goblins or collect several chests. At the end of the quest, the player will be sent to the top screen to complete the next quest, either to kill the raid boss or kill several of the boss’ minions. Players will need to dodge incoming fireballs fired by the boss and minions that spawn beside the boss and run around the screen. The player can electrify themselves to damage minions and, with enough mana, fire moving lightning bolts at the boss to damage it. However, the boss will move up and down on the right side of the screen, so good timing is necessary. Upon emptying out the mana pool, players can run into a cave on the top of the screen where the healer will quickly replenish the player’s mana. Take care though, as the area is randomly fills with deadly flames, forcing the player out into the open. 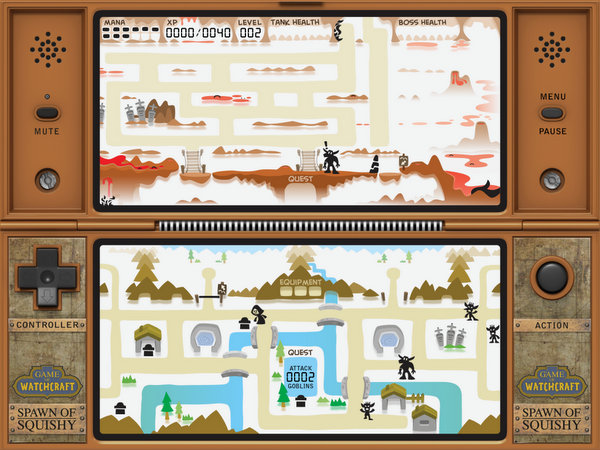 Once the second quest is complete, an item will drop behind the quest giver that can be equipped. The player can then return to the start and the game continues again, with a higher level of difficulty.

Upon dying, the player will lose all their equipment and whatever progress made in the quest will disappear. Just like World of Warcraft, the player’s ghost will spawn at the graveyard and the player will need to return to their body to continue the game. 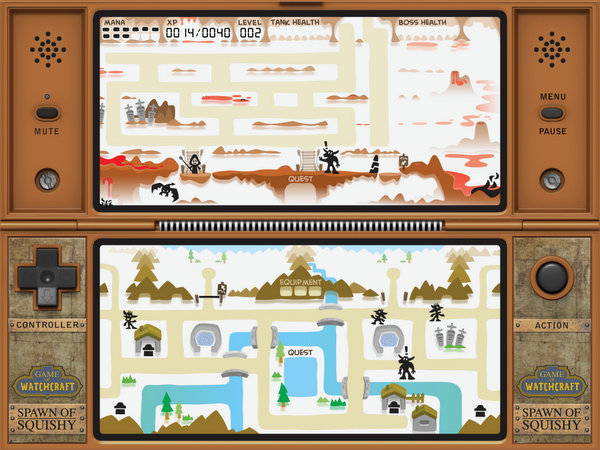 The controls in Game of Watchcraft are particularly finicky. They require the player to touch some part of the D-Pad to respond. Due to the nature of Game & Watch LCD games, there is only four directions of movements. If you happen to press two directions at once with a thumb, the game will make its best guess and move you in one direction. Using strictly the touchscreen controls, the game is best played by the player holding down on the touchscreen and then swiping their thumb in the correct direction and hopefully returning to the D-Pad’s centre to stop moving. Without some sort of third party controller aid, Game of Watchcraft’s controls can become extremely frustrating. The developers themselves used stick-on controller aids on their demo units at PAX AU 2013, called a Thumbies. 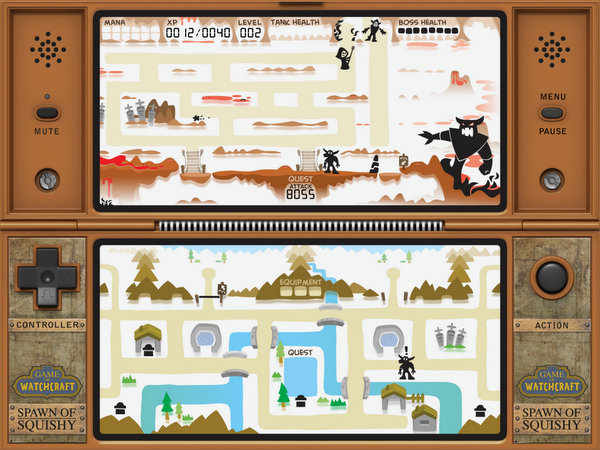 The game’s replay value rests in the Game Center integration. There are leaderboards for players to compete on and several achievements to complete. The extra two quests already provide more variation than the average Game & Watch title.

LCDemakes make a great effort to replicate the experience of a Game & Watch LCD game. The visual stand-in for the device show an incredible attention to detail. The working mute button triggers a fake red LED to light up when engaged, and parts like screws and speakers holes are present. A nice touch that I appreciated was the intro animation for the start of each game. All of the positions where characters appear quickly go dark, filling the screen. The “physical” portion of the game provide all the colouring in Game of Watchcraft, while all the moving parts of the game are the classic dark gray colouring, staying true to original Game & Watch devices. 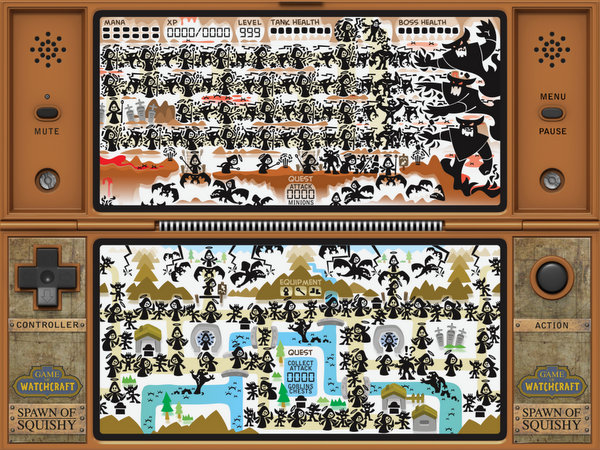 There is no music in Game of Watchcraft, just the beeps of classic LCD games. Clearly, a choice was made to preserve the original feel of the game, and it was the right one.

I applaud LCDemake’s incredible attention to detail, as it is obvious great care has been taken to replicate the Game & Watch experience. Unfortunately, the game is held back by really frustrating controls that need a physical button of some sort. At $2.99, the game is over-priced as it only contains one “device.”  For those looking to relive the LCD based games they grew up with in the 1980’s or want to show their young children the game mom and dad played, Game of Watchcraft is a worth a try.