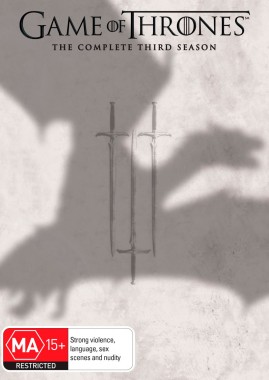 The fourth season of Game of Thrones will debut on April 6, so as tradition dictates, Season 3 has been released on DVD and Blu-Ray to allow fans to bring themselves back up to speed with George R R Martin’s fantasy epic. The popularity of the series is unmistakeable: it has won multiple Emmy awards; garnered critical praise; is pirated to an extraordinary degree; and there seems to be a new video game based on the Song of Ice and Fire universe popping up every year. According to HBO, viewer numbers are going up and up with each season of the show, with an average gross audience of over 14 million viewers for Season 3.

It is almost a given that the show itself is excellent. Ten episodes somehow manage to juggle dozens of characters and plotlines in a fluid and engrossing way. The pace seems a little faster before, perhaps due to the onslaught of new characters and the sheer size of the book that the season draws upon.

This is the most fresh blood that the show will ever see, with new faces appearing in nigh on every plotline. Bran finally meets Jojen and Meera Reed, Grey Worm, Daario and Missandei join Dany, and Beric Dondarrion and Thoros of Myr finally get a little screen time. Best of the lot however is Diana Rigg as Olenna ‘Queen of Thorns” Tyrell, who takes on every power player in King’s Landing and walks away victorious.

Indeed the Tyrell’s are a major force this season, with Margery and her grandmother proving that they are just as good at playing the Game of Thrones as the Lannisters. Whilst they fail to marry Sansa off to Loras, Margery is without doubt the only person who knows how to manipulate the ever more psychotic Joffrey. 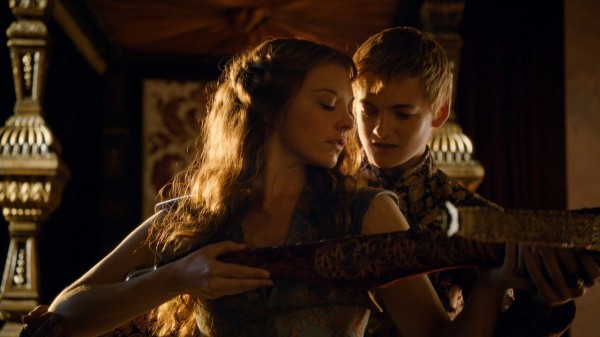 Speaking of weddings and psychotics, a Storm of Swords contains the most infamous scene of the entire Song of Ice and Fire series. It’s shocking. It’s awful. It’s vicious. And somehow the folks at HBO managed to make it even worse! The star of the episode is without doubt Michelle Fairley, who turns in a heartbreaking performance as Catelyn Stark. The build up to the massacre of the Starks is sublime, and just as it feels that things are about to get back on track for the King in the North, all hell breaks loose. The episode is a reminder that in Westeros, the ‘good’ are often the dead, something that Arya Stark, who gets so close to her family only to see her brother’s mutilated body paraded before her, is beginning to realise.

Her descent into a world of death and violence seems more apparent on screen than in the books, her threats to the Hound and others around her more worrying when actually  seen coming from the mouth of a young girl.

Other more obvious changes from the novel see Gendry substituting for Edric Storm, whisked away to Storm’s End where Lady Melisandre for some reason needs to get naked with him. Robb Stark’s wife and unborn child do not find the mercy here that they do in the books, and Daario forgets that he’s supposed to have a beard- he is the only new character who feels miscast, failing to bring the necessary charm to someone who isn’t that likeable in the first place.

The only other hiccup is the prominence of Theon Greyjoy. Imprisoned after the sack of Winterfell, the heir to the Iron Islands is tortured by an unnamed young man episode by episode. Whilst the skin flaying , toe piercing and penis removal are all brutal they don’t serve any point. Theon is being tortured in a dungeon when we meet him, and is still there ten episodes later.

Someone who does get a decent story arc is Jamie Lannister. Initially one of the most shallow and unlikeable characters in the series, his time with Brienne marks the beginning of a long and challenging journey that is packed full of the high impact moments the show has become famous for. The loss of his hand is brutal, but it is his bathtub confession to Brienne about his  murder of the Mad King that truly shines. 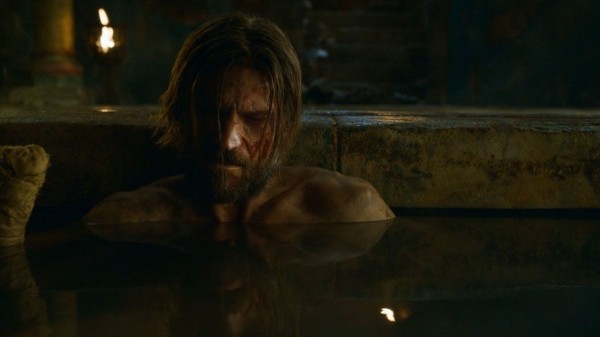 Charles Dance is as formidable as ever as Tywin Lannister, who this season unleashes the full extent of his power, and not only upon his enemies. Tyrion and Cersei find themselves under the yoke of the head lion, forced into political deals masquerading as marriages. Even Joffrey gets sent to bed.

Events north of The Wall finally seem to be relevant to the rest of the realm, with the Night’s Watch/Wilding plot-line splitting in two to follow Jon Snow and Sam Tarly separately. Jon’s romance with Ygritte and Sam’s infatuation with Gilly add some much needed warmth to the show, but the threat of the White Walkers is what finally peeks through as the driving force behind the entire show- the big picture is starting to emerge.

The production standards remain as high as ever for Season 3. Morocco, Northern Ireland, Croatia and Iceland allow the disparate locations of Westeros and Essos to breathe, with impressive attention to detail on costumes and props and weapons. Whether it’s the chess like pieces Robb uses on his tactical map or the strangely fitting headgear that the Freys favour, everything feels as it should.

The need for an ever larger special effects budget has yet to take its toll, with Dany’s dragons still holding up well alongside some of the more extravagant locations. A lot of the action is kept small scale and close, which is fine for now but could see some of the incoming material seriously stretching the limits of HBO’s purse strings. 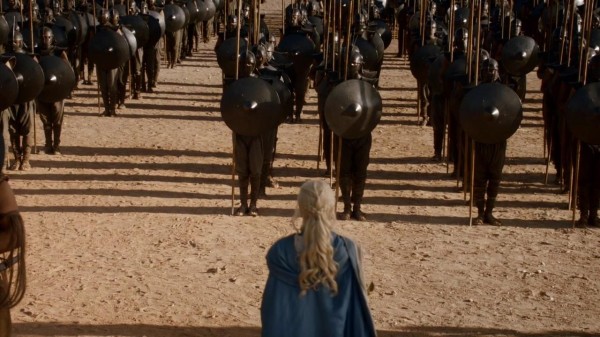 The soundtrack of Season 3 was composed by Ramin Djawadi, who provided the music for the first two seasons and wrote the main theme of the show.  The tone is more sombre this time around, but as ever with Djawadi’s score it is a great complement to what’s happening on screen. Recurring themes evolve with the characters they accompany, and many of the tracks could stand on their own.

The two that make the most obvious impression are The Bear and the Maiden Fair and The Rains of Castamere. The Bear and the Maiden Fair, a typical fantasy ditty sung throughout Westeros, is handled by indie band The Hold Steady who turn it into a rollicking rock song. It seems like an odd decision for a show set in a medieval era,  but when it thunders in over the end credits of  Walk of Punishment one heck of a television moment is topped to perfection.

The extras on the standard DVD release will do little to please long time fans of the series but will shore up the knowledge of newcomers to the show. There’s a recap of Season 2 which feels like it was made before Season 3 ever existed;a short bit of background fluff on the Wildlings; a similar puff on the nature of marriage in Westeros; and a quick look at each of the new characters such as Olenna Tyrell and Mance Rayder. There are plenty of commentaries that take in both cast and crew, and whilst the actors can offer some emotional perspective on certain scenes, it feels like a waste to have the stuntmen and weapons masters relegated to bantering and making the odd observation about their work – individual interviews showcasing their contributions would have far greater appeal for those really wanting to dig in to the makings of the show.

It is worth noting that the Blu-Ray edition of Season 3 comes with some additional extras. As well as an in-episode guide and character/relationship guide there is an in depth look into The Rains of Castamere episode, which is undoubtedly going to be one of the most significant episodes in the entire run of the show. It’s disappointing that the Rains of Castamere feature doesn’t make it to the DVD release, but an inferior selection of extras is a given when considering DVD against the greater capacity of Blu-Ray. 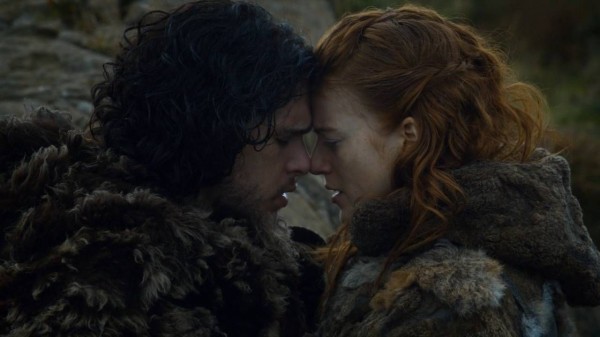 Game of Thrones is one of the best shows out there. Season 3 does an impressive job of adding new and interesting characters to the fold whilst allowing ample time for old favorites to grow. The true drive of the story – the impending arrival of the White Walkers – begins to come to the fore in the bloody conclusion of the War of the Five Kings. There are more jaw dropping moments than ever before, and nigh on every cast member turns in a fantastic performance that is supported by impeccable production design and a great soundtrack.

The DVD set leaves a lot to be desired in the extras department and the superior visual quality of Blu-Ray really becomes noticeable with a show of this scale. Nonetheless Season 3 of Game of Thrones is still engaging, edge of your seat stuff, so it feels petty to penalise it too much for the shortcomings of the DVD package.