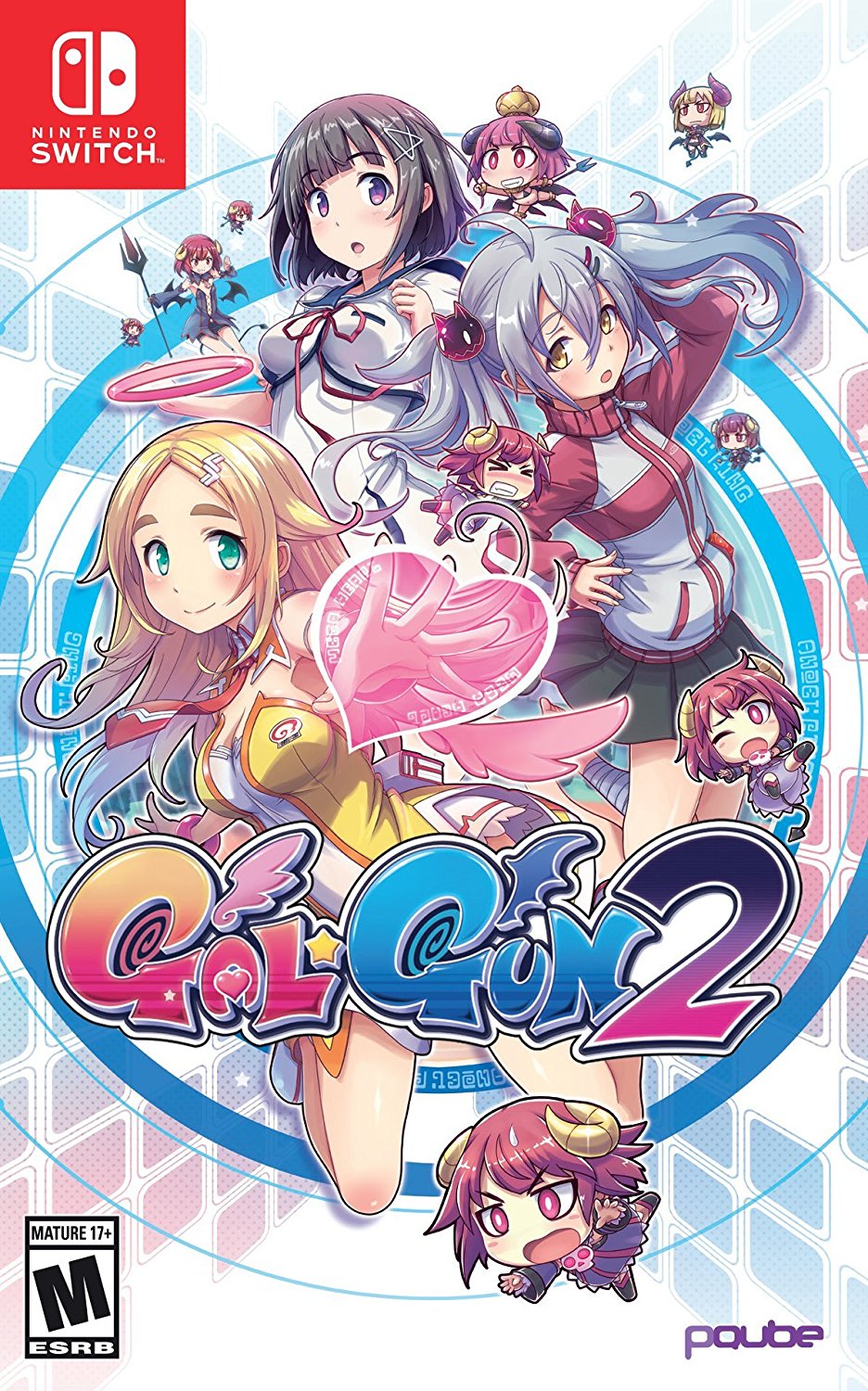 Whenever a fan-service heavy game is released in Japan there is always a question on whether or not we will see the game released in English. For some time the answer was no, then for a bit it would lean towards maybe, only for that progress to falter in recent years. Thankfully there are still publishers willing to bring these types of titles to the West and with a game like Gal*Gun 2 that has already seen other titles released in English it seemed like a sure thing. Now with this rail-shooting title available on the portable Switch, is it worth picking up?

Players take on the role of a relatively normal boy attending school where he spends most of his time with his friend Nanako and taking care of his nextdoor neighbor turned shut-in named Chiru. One day a strange app appears on his smart-phone that refuses to be deleted. After opening the app an angel calling herself Risu appears and says that she needs your help to eliminate a demonic threat that has invaded the school. 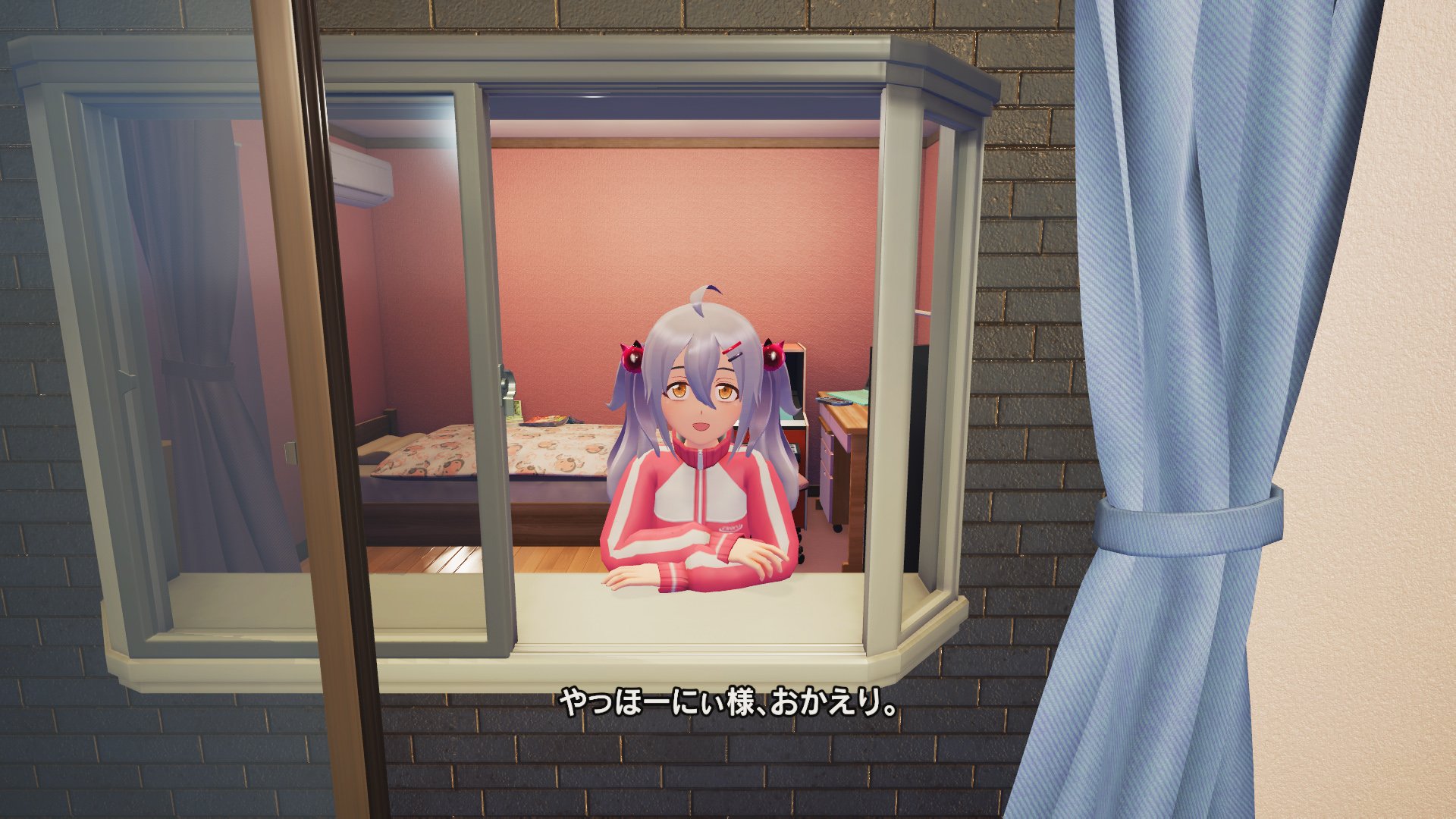 You will do this through the use of Pheromone Goggles and a Pheromone gun that has been installed with a Demon Sweeper upgrade. This allows the user to suck up any mini-demons that appear attached to girls though they can simply be shot with the gun. Because of these goggles any female around the character will immediately become infatuated with the wearer, meaning that to hunt these demons the player must also avoid the numerous confessions and occasionally sadistic tendencies of the girls of the school.

The story doesn’t really go too far into detail regarding the situation that players are placed in, with it hoping that players are at least familiar with the premise of the series at this point. In fact, returning players will notice quite a few bonuses as a familiar set of twins appear and the main antagonist happens to be a familiar problematic demon girl. There are a variety of endings to be unlocked and each of the main girls; Risu, Chiru, and Nanako, have different storylines to be revealed but it is worth noting that if you happen to unlock an ending opportunity, it will close you out of other possible endings until you start over in a New Game +. This is a bit annoying but given the fact that players are given the opportunity to jump to the final day if they so choose, it shouldn’t be too much of an issue.

The majority of your time in Gal*Gun 2 will be taking part in rail-shooter style missions that involve the player surviving waves of girls while traveling through various parts of the school such as the courtyard, gymnasium, pool, and more. As you make your way through these levels you’ll need to shoot these girls a handful of times, or once if you hit their “ecstasy” point, to make them collapse in pleasure and leave the area. 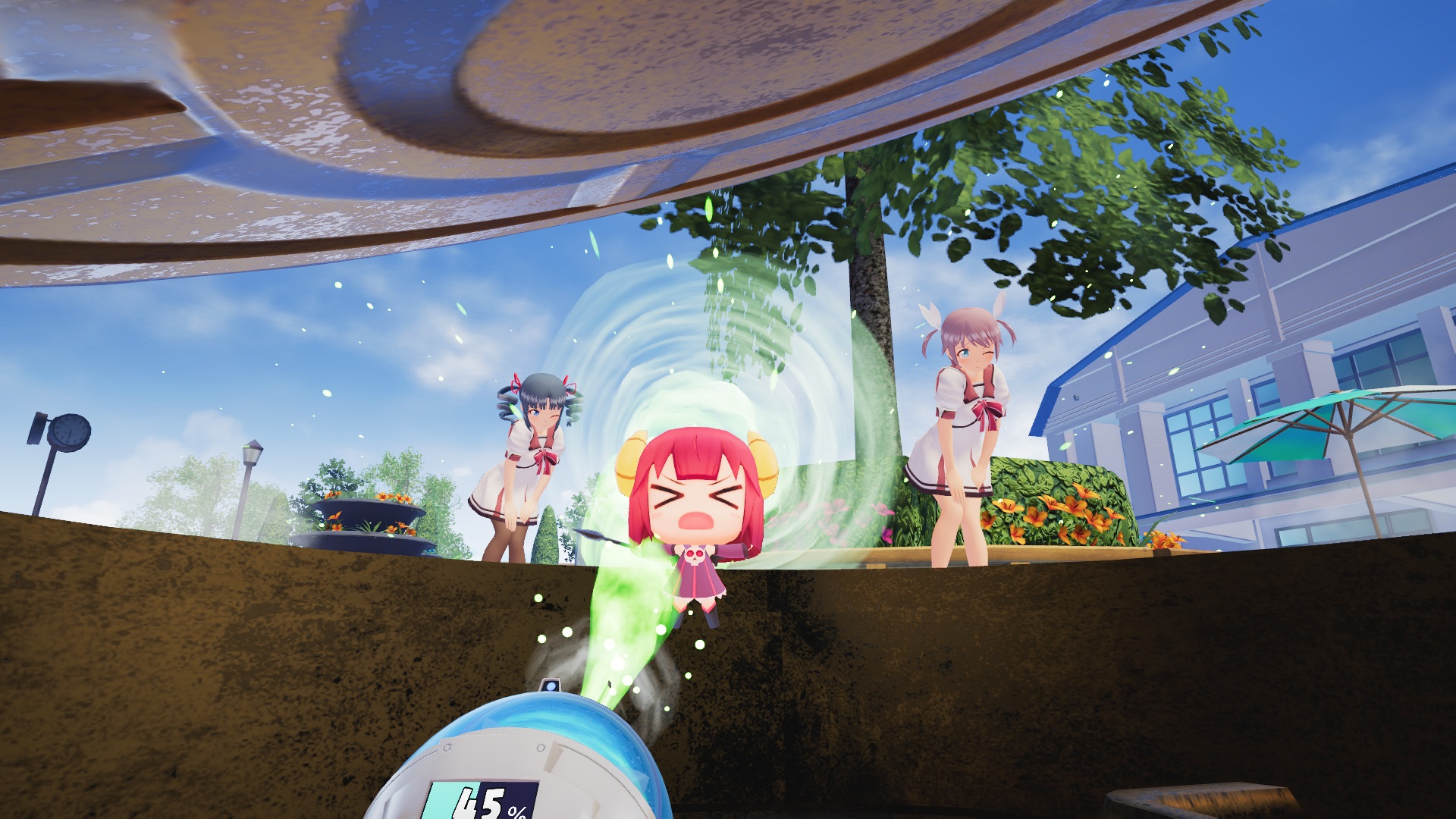 Occasionally girls with mini demons attached to them will appear and not only are these girls impervious to normal shots until the demons are shot off of them they are far more aggressive than their counterparts. These demons can then be either shot and destroyed or sucked up using the Demon Sweeper for extra points. As you progress through the game it is possible to gain various upgrade parts for your main equipment, allowing the Demon Sweeper to even tear the clothing off of the girls, also eliminating them from the stage.

Outside of this standard mission type players can also be given missions where they will need to track down various items hidden around a room while eliminating girls and demons in the area or simply defending a girl or group of girls from swarms of demons hoping to drain them of their energy. Players are given a chance to select two of these missions a day with a special “rendezvous” option available at night (though this is also available during the day). It is interesting to note that there are a handful of boss fights in the game though these battles tend to follow a similar pattern no matter what boss you happen to be fighting. 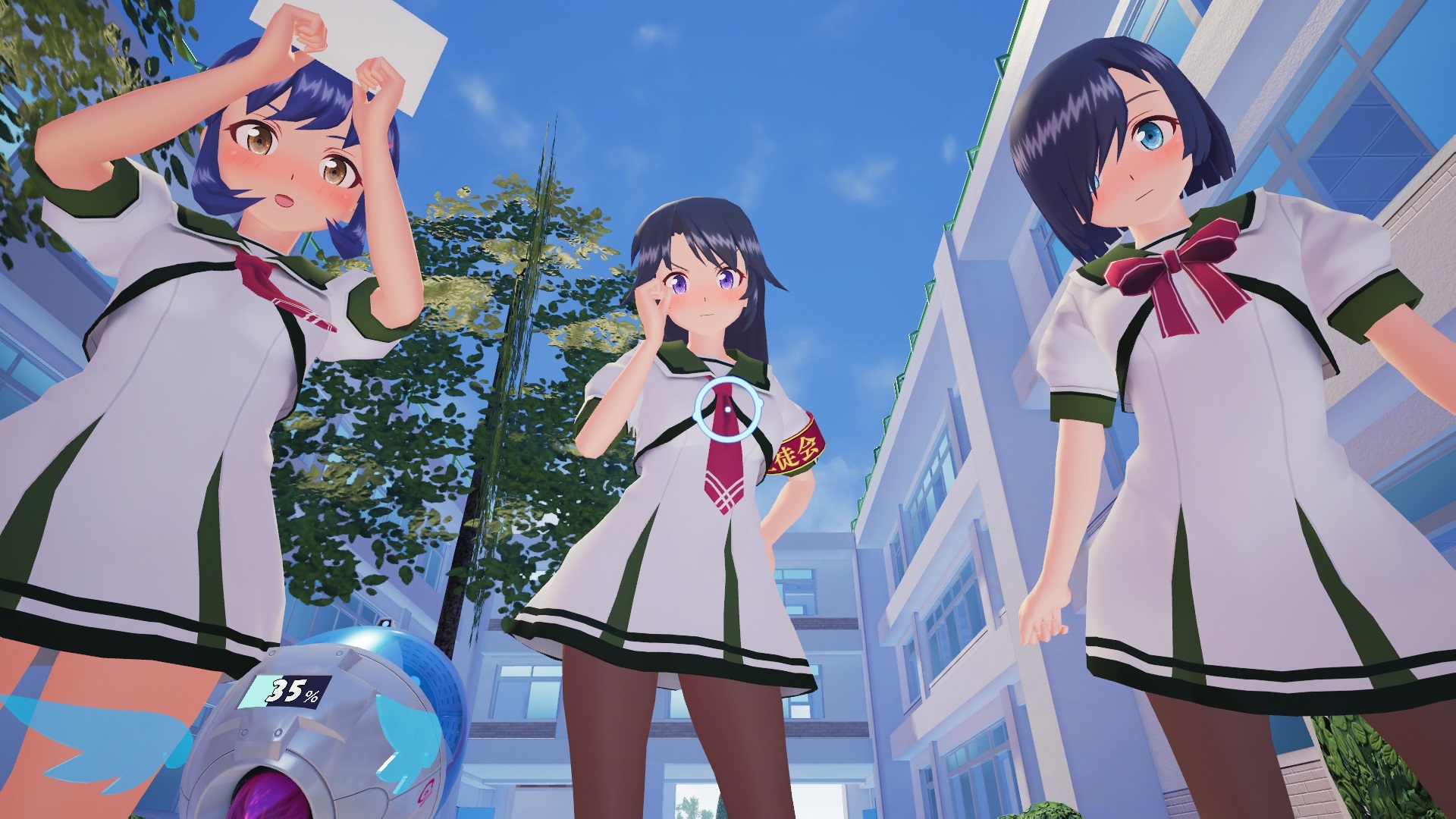 In fact, outside of the relatively difficult item finding missions, this game tends to be a rather easy one to complete. Rarely will players feel like they are about to lose a level as not only is it easy to stun girls by temporarily using the Demon Sweeper or by using the sweeper to suck up long range confession attacks, but the amount of damage done by their confessions and affection is rather minimal in the long run as advancing through a stage or absorbing a “Mr. Happy” plush will restore some of your health.

As mentioned before players will have the opportunity to “Rendevous” with characters by using their smartphone. All of the girls in the game can give the player their phone number when completing side-missions where they ask for help and when you meet with them you can learn various bits of their backstory and their personalities. It also happens to be where you can raise their affection by giving them plenty of candy with the hopes of having them like you enough to take part in a “Doki-Doki” mini-game fantasy that is taken from the core characters of the game or see what they say when you get a little too close to them. 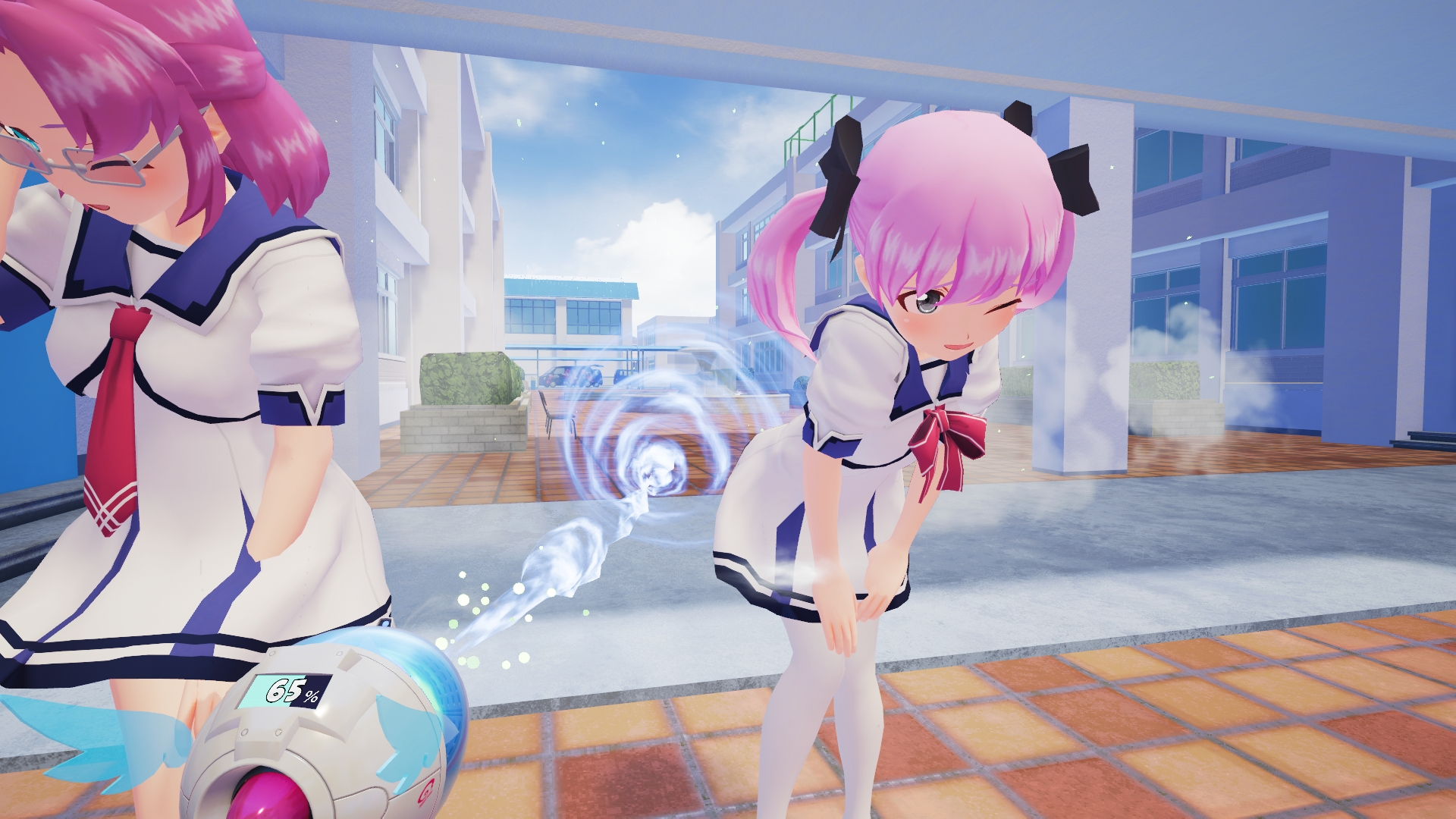 This candy is obtained through simply completing missions and is also the best way to raise affection with both Nanako and Chiru to unlock more of their story paths. All of these paths will feature the aforementioned Doki-Doki mode and other fan-service heavy scenes that involve finding demons hidden within their body and purifying them, often by stripping the girls down to their underwear in the process. 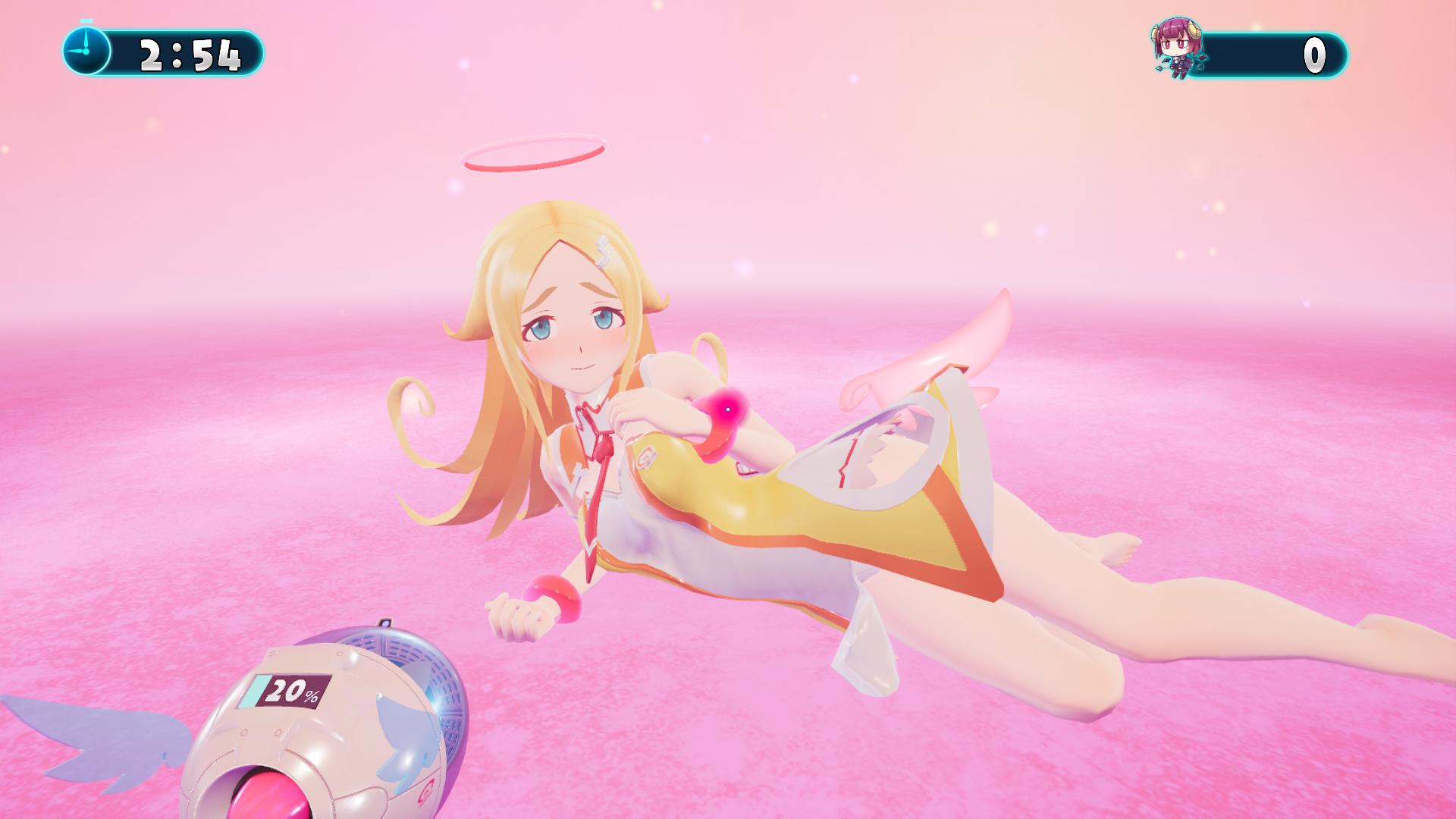 Perhaps one of the elements that does make Gal*Gun 2 a bit of an easier game is the fact that the Switch version will provide players better aiming if they happen to play it as a handheld. Players can choose to aim however they wish with the analog sticks but if you want to be extra accurate, especially when it comes to picking apart far away mini-demons, then you can also zoom in and take precise aim using the motion controls of the system. This control system is adjustable if you don’t like to use this function but it does make the game a bit easier.

With Gal*Gun 2 being released on the Switch players should expect a relatively solid looking game that doesn’t do a whole lot to impress but does run at a nice speed throughout most of the environments in the game. Your room can occasionally get a bit rough depending on how many decorations you happen to have placed around but for the most part this title runs smoothly. The character designs are nicely handled and unique enough for each girl, especially in the cases where some characters happen to be related to one another, and there is more than enough titillating details to please fans looking for heavy fan-service. 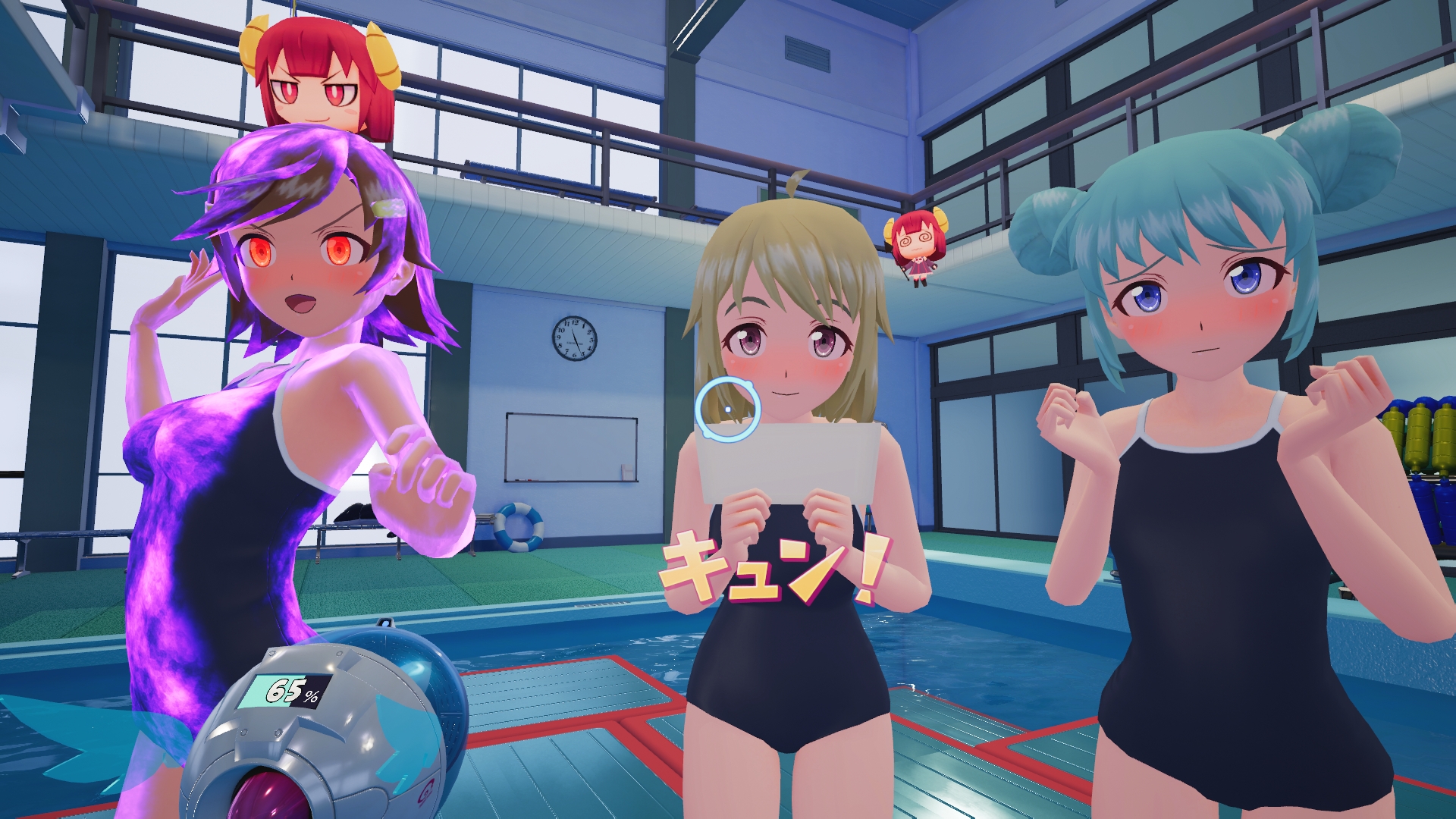 It is interesting to note that there is only the original Japanese voice track to work with in this game but that isn’t too much of a problem as nearly every element of the game is given solid subtitle work, even with the main enemy’s verbal tic given a unique twist in the dialogue.

Gal*Gun 2 makes for a very solid, albeit very easy, on-rail shooter that knows exactly who its target audience happens to be and does its best to please them. With a number of different endings with a decent storyline provided with most of them and more than enough fan-service to please anyone knowing what they are looking for, this game ends up being more than satisfying.

Gal*Gun 2 knows its target audience well and manages to deliver in most regards though tends to be a bit too easy to complete if you want a challenge with your shooters.
7.5