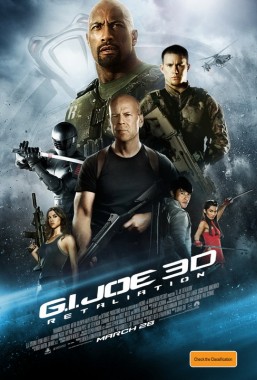 ‘Rise of the Cobra,’ or G.I. Joe 1, was bat-shit insane. The goodies and the baddies were both very well drawn with awesome characters emerging from both sides. As far as Hollywood action blockbusters go, you couldn’t really have asked for more – the effects were huge, the pace never let up and everything made sense, even if it was ridiculous. 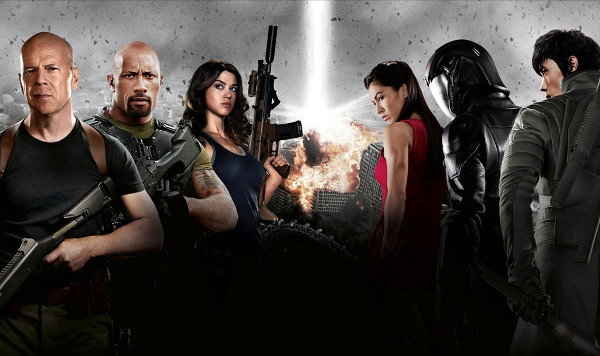 I remember when ‘Rise of the Cobra’ had finished I couldn’t wait to run out and watch the next one – the set up was perfect for a massively expanded universe. Alas, the direction the franchise has taken strips out everything that was interesting about the original and replaces it with… sitting around and talking about nothing heaps? Or was I supposed to supposed to have been focusing on the half thought out set pieces and their fake looking locations? I can’t put my finger on what the new angle is but it’s not a comic book movie (which, aside from the toys, are meant to have been the narrative basis for the franchise).

At the end of ‘G.I. Joe – Rise of the Cobra,’ Cobra Commander actually pulls off his diabolical plan, despite being denied the awesome explosions that acted as a red herring. The real plan was to replace the president (Jonathan Pryce) with Cobra insider Zartan (Arnold Vosloo) and control the Executive Branch of the US government. Cobra uses the office to frame the ‘Joes’ for the assassination of the Prime Minister of Pakistan and the theft of their nuclear weapons. Every single Joe is then annihilated because apparently they all went on the same mission at once despite having one of the sweetest bases ever built by man. I guess even the I.T. department came along for the ride this time. Oh, except for our protagonists, Roadblock (Dwayne Johnson), Lady Jane (Adrianne Palicki) & Flint (D.J. Cotrona), who manage to survive.

The film seems to struggle on giving Flint anything to do at all while resting pretty comfortably on some well worn tropes for the other two. Meanwhile Snake Eyes (Ray Park) is chilling out somewhere ages away from the action. Granted both he and the RZA appear to be training a new member, Jinx (Elodie Yung) but she has barely any lines in the film and is basically rendered redundant.

Let me take this chance to deal with how the two different films handle having females in their casts. While both films used the female characters for eye candy, in ‘Rise of the Cobra’ they were functional team members that used an equal balance of wit, brawn and sex appeal. This time around the female leads were either not given any dialogue or their only cunning was to flaunt their bodies, which is a real shame. They try to make up for this with a plot line about how Lady Jane’s father never wanted her in the army because she was a girl and that’s what inspires her. Not only is this tacky and ham-fisted, it’s delivered in the most insincere fashion.

We get no time with the villains at all. Watching the Machiavellian machinations of Cobra was one of the most interesting elements of the first film. I think Cobra Commander has 5 minutes screen time absolute tops. Destro, the arch nemesis who now has a head entirely made out of metal is left out. Why? That’s totally sick. You can’t set up something as epic as the main bad guy from the previous film getting his head turned into metal and then leave it unused. The rest of the plot revolves around ‘getting the gang back together.’ It’s hard to care when everyone you like from the previous films are now dead and replaced with people that aren’t even introduced clearly.

Again, this film takes another major step down from the standard set in ‘Rise of the Cobra.’ That movie was constantly filled with colour. The nano-tech added some vibrancy to the action sequences, to the point where it was almost another character. Locations weren’t just arenas for battles to take place, they were crucial to the narrative and were shot in a way that took full advantage of the space. Plus they had a dope base. I can’t talk about that base enough; that was amazing. Did Hasbro release that as a play set? 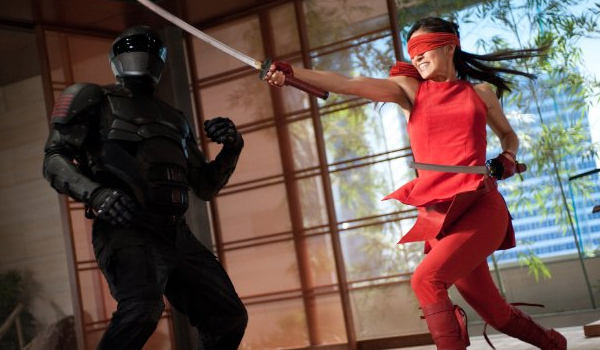 Anyway, ‘Retaliation’ fails to make use of space in that same way at every turn. Nano-tech feels like it’s only included because the first one did it. Its absence changes the palate of the film and isn’t replaced with anything. Instead of a sweet base we get a poorly lit gym that Roadblock grew up in.

The change in directors, from Stephen ‘The Mummy’ Sommers to ‘Step Up Revolution’s’ Jon M. Chu should have indicated a shift from magnificent set pieces to tightly choreographed fight scenes. Yet we get neither. Chu has had a pretty fast rise to fame and, despite what you may think of films like ‘Step Up 2’ or ‘Justin Bieber: Never Say Never,’ he’s renowned for capturing fast paced action and movement. Unfortunately this does not translate into being able to direct an action film. I wish we didn’t have to learn that with this franchise though – I had high hopes. 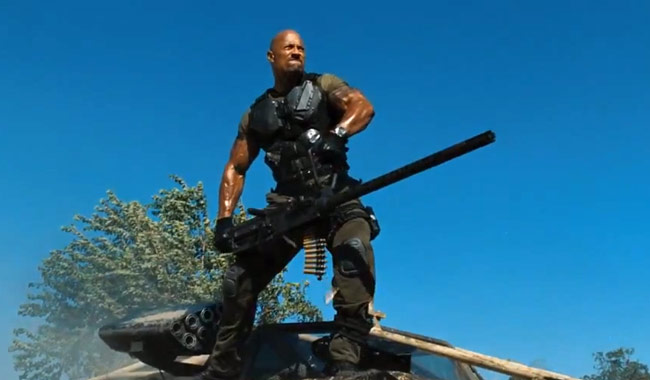 Some basic mistakes are made here. There’s a whole sequence where it looks like Snake Eyes and Storm Shadow (Byung-hun Lee) are in the same location, despite one of them being in a penthouse in Tokyo and the other in some far off mountainous hideaway. I fail to understand how the editing can be so bad in such a high budget film.

Directly lifting sounds from Transformers to imply technology isn’t just lazy, it’s sad. Otherwise I can’t say the audio had much of an impact on me. Pop songs are used exactly how you’d expect them to be. Explosions sound ‘explodey’ without having all that much meat on them. The stripping back of the tech angle meant there wasn’t anywhere near as much room for audio flair as the original.

They had so much good material to work with here that the result is pretty unforgivable. I’m placing the blame mostly in the hands of the director change. It’s a pity too, because a dance director converting to action is a pretty interesting choice and it could have worked out too. When you’re competing with the guy who made ‘The Mummy’ though, you’ve got your work cut out for you. 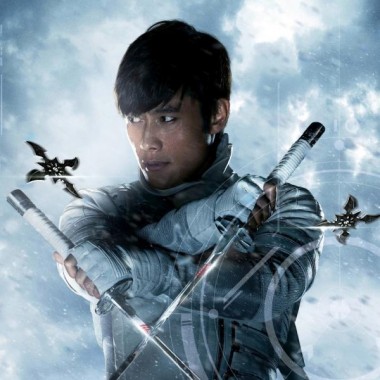 What’s worse is that Chu was unable to make the best of his own strengths. Fights seemed stilted and uninteresting, the dynamics between characters were dry and nobody seemed to have any grace on the screen. Actually, that’s kind of unfair. Perhaps the cutting room floor, the producers or the writers need to be slapped around a bit too. Excluding a core narrative from the villains’ perspective is a horrendous misstep. Just reading a list of their names gets me pumped. Firefly, Storm Shadow, Cobra Commander, Zartan…. I could keep going. They’re such an integral part of what makes this universe compelling – why shouldn’t we get to know what they’re up to?

That’s not all they’re guilty of though. We don’t really have anything for the Joes to fight until the 3rd act. They spend most of the film kind of flitting about, with a little time set aside to perv on each other. By the time Cobra’s scheme is introduced and the clock starts ticking, it’s already the final fight scene. There’s no pressure cooker here. ‘Rise of the Cobra’ had our protagonists chasing terrorist attacks after scrambling to protect their base while solving the mystery along the way.

The whole thing feels lazy. Some of the G.I. Joe parody youtube clips have more character development than this film.