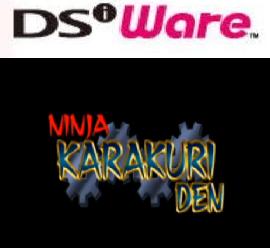 G.G Series Ninja Karakuri Den is a platforming game from Genterprise Inc. and part of the popular G.G. game series in Japan.

Story
Ninja Karakuri Den doesn’t have a story or a huge plot as it is made to be a simple game with quick gameplay. You take control on a small unnamed ninja and defeat enemies and objects to move to the next levels door. There are small moments of light dialogue, but these are mainly taunts that come with a boss victory. 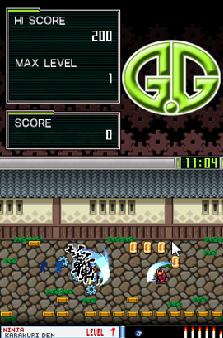 Gameplay
In Ninja Karakuri Den you will try to make it through the 60 stages in the game, fighting other Ninjas and enemies in your way. The main objective of standard levels is to break all the gears to open the door to the next level. There is quite a catch though. The floors are made up of platforms which upon stepping on fall out from under your ninja and you must quickly jump onto the next platform. There is also a timer to keep in mind as well as once it is out, you must restart the level. Various enemies will also be in your path to the door with different abilities that can push you back, cause you to fall straight down, or just simply finish the hero off.

Your ninja will be jumping the whole time as you quickly move from platform to platform. When a platform disappears another one will appear somewhere on the level just a few seconds later which lead to saving my ninjas life on several occasions. Jumps are performed automatically but using the up and down buttons on the D-Pad controls how far you move up or down during each leap. Our hero also comes equipped with throwing stars, a sword and a dash that can quickly get you from falling to your demise. Using the main sword attack and the dash together also performs a special attack which can be very helpful in tough situations. I found the weaponry all to work quite well but the key to every attack due to the constant jumping is timing and precise and accurate hits. One thing I did learn was that the sword is probably the most effective weapon in the arsenal as it is the most powerful item. The throwing stars are useful during boss battles but can be more of a hassle due to their weak attack when playing a standard stage so I didn’t really mess with them for the main part of the game.

After every few stages a boss which is usually a Ninja Adept or Master will appear to fight. Instead of breaking gears, you must defeat the boss to move forward. The earlier bosses are quite easy and will only throw projectiles from afar, but the latter are equipped with bombs and many other gadgets that will take much time and thought out strategy to take down. These higher level ninjas are much different from the standard enemies as they can take a lot of hits so come prepared to time your jumps right on these levels. Many of the bosses are simply repeated which was kind of disappointing but I didn’t really think about that too much as the levels move so quickly it doesn’t effect much of the overall product. 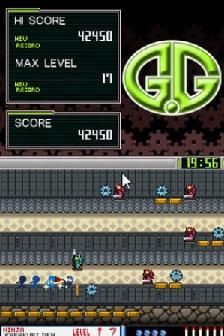 Graphics/Audio
As far as graphics go, everything is in 2-D and looks fitting for the game. I kind of thought the sprites reminded me of a 2-D version of I-Ninja which is a game I liked when it was released quite a few years ago. Movements and animations are also well done and everything runs smooth with no slowdown which is great considering on how fast paced the gameplay is. I will say one small thing I found unfitting was the brightly colored curtain that pulls in-between levels which just didn’t really fit with the rest of the presentation.

The music is sounds appropriate as well and captured the ninja world presented well. Sound effects were on cue but a bit generic for the most part but the background music made up for that as well so I think it evened out fine in that area.

Overall
Ninja Karakuri Den is fast-paced and has some addictive game-play that can keep you going for a few hours at a time. The unique style of gameplay made up for the lack of story and generic sprites and certainly involved quite a bit of skill to complete each level. At times it may be a bit bland and a bit repetitive but for just 200 points I think this one is definitely a great addition to the DSiWare and a decent game to pick up and play for those wanting something quick and simple to play on the go.