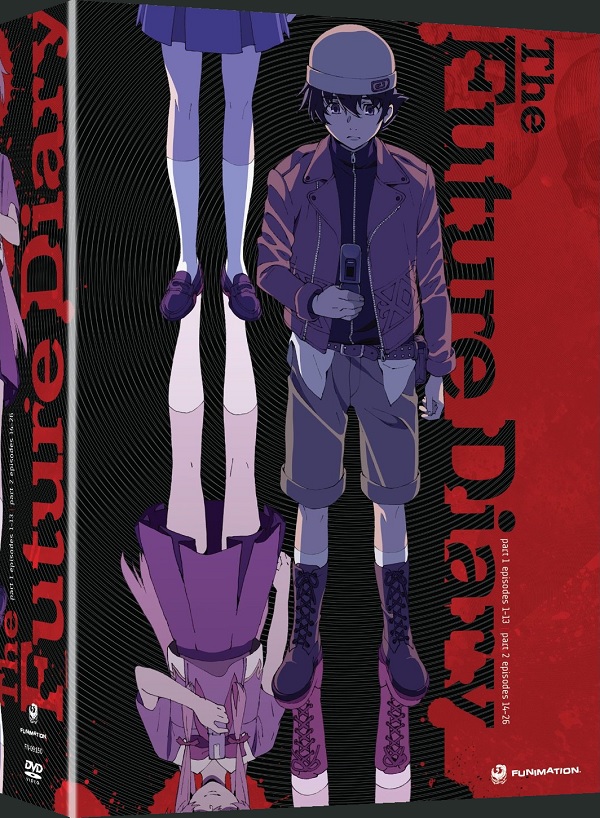 Overview
Sometimes a series can be well known for one specific aspect or character and anime is no exception from this. In the case of a certain anime called Mirai Nikki, now called Future Diary in North America, a lot of focus was placed not only on the story itself, but the female lead known as Yuno Gasai. Now, with an English dub accompanying the release from FUNimation, does Future Diary: Part 1 manage to translate well to English shores?

Story
In school it is hard to be popular and while there are kids who still manage to make a few friends here and there, there are others that simply stop trying and try to coast through their teenage years as a simple observer. Yukiteru Amano, also known as Yuki, was one such observer. Outside of being rather skilled with darts, Yuki barely interacted with the world around him and rarely spoke to anyone. Instead he buried himself in his cell phone where he wrote various diary entries talking about the various things that he saw that day. 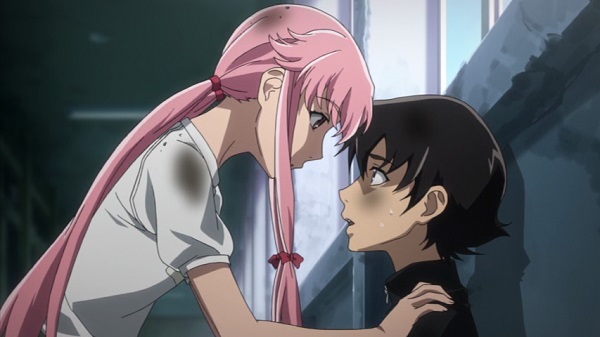 Well… to say that Yuki had no friends would be a bit of a lie, considering he does have two imaginary friends named Deus and Murmur. The only thing is, these two are not imaginary and they suddenly decide to give Yuki the ability to predict the future through the use of his cell phone. Thinking that this is a gift from a god, Yuki begins to abuse his knowledge of all the future events occurring around him to ace tests, avoid bullies and become a star at his school.

However when he notices that one of his classmates, a girl named Yuno Gasai, appears to know Murmur, Yuki notices that his cell phone’s diary entries have changed and he is now set to be killed by a serial killer, resulting in a DEAD END. The girl who appeared to have knowledge of his diary and of Murmur appears before him, revealing that she too has a diary and will do anything she can to protect him. After managing to thwart the attempt on Yuki’s life, Deus reveals the true nature of the diaries. 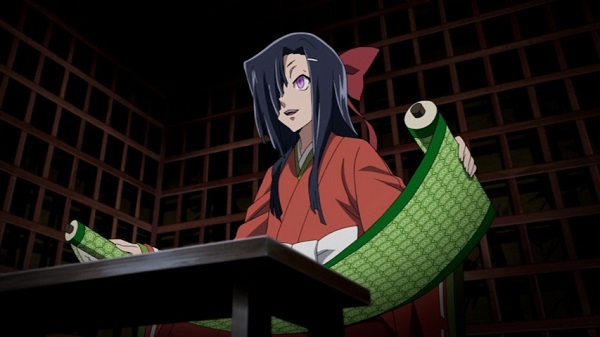 Deus is the God of Time and Space and he has selected twelve diary users to participate in a survival game where the only goal is to be the last one standing. After killing or destroying the diaries of the other eleven diary users, the winner will become the new God to replace the soon to disappear Deus. After revealing this news to the other diary users, Deus states to the group that Yuki, the First, is his favorite for the game, instantly making him a target for the rest of the diary users.

As other diary users begin to target Yuki’s life, Yuki must try to not only survive their attacks, but also deal with Yuno and her obsession with everything about him. Future Diary: Part 1 works in an interesting manner by creating mini-arcs within the main story. Every encounter with a diary user takes roughly two to three episodes to conclude and each of these arcs put these two against deadly opponents that can only be overcome when they work together. To keep things interesting, each diary user’s diary works in a different way and while most diaries are cell phones, they can come in any shape or size and each user has various tactics for trying to eliminate Yuki and Yuno, some indirect and some simply involving a lot of explosives. 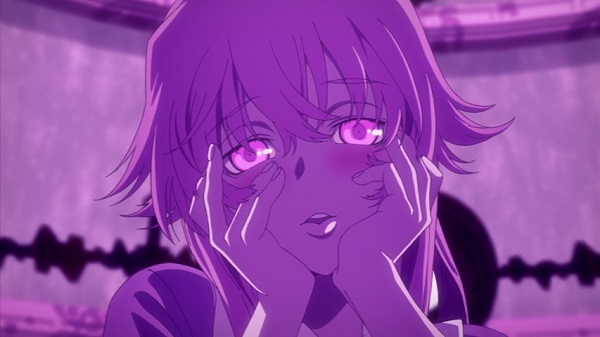 Only a handful of the diary users and characters within Future Diary are developed through the first half of the series, a few of them are barely given any story whatsoever though most of them seem to suffer from a bit of eccentricity, or are simply psychotics given the power of a demigod, that lead them to this path of murder, but it quickly becomes apparent that there is much more to Yuno than meets the eye. Not only does she stalk Yuki to the point where her diary is only capable of telling her exactly what Yuki is doing or what will happen to him in the future, but there is a sinister nature lying beneath her devoted façade.

There is a certain character type known as a yandere and while it is far from new in anime, rarely has anything been taken to the level that viewers will find in Future Diary. She cares little for anyone else besides Yuki, wishes to kill anyone who would become close to him and will freely throw away the lives of others if it means Yuki will be okay. To make things worse, numerous mysteries begin to circulate around her personality and these circulations reach their tipping point at the final episode of Part 1, bringing Yuno’s yandere level to something rarely seen in anime. 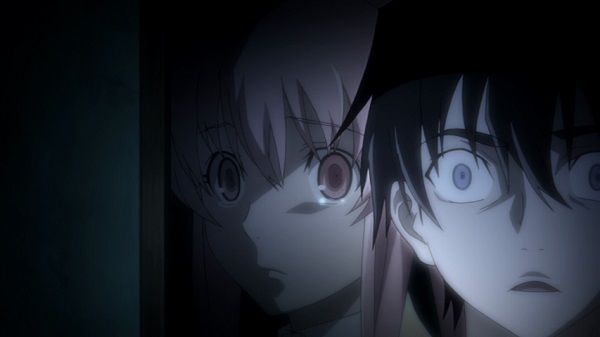 Future Diary: Part 1 leaves viewers with a cliffhanger into the second part of the series but also leaves viewers with many questions at the same time. By keeping the diary users anonymous from one another, it keeps viewers from knowing where the next threat may come from. It also helps that the aforementioned mysteries and psychological issues surrounding Yuno make for an interesting story built upon plenty of action sequences and numerous deaths.

Visuals
It is worth noting that this is an uncensored version of Future Diary, which means there is a bit of extra gore here and there as well as some mild nudity and very dark tones meant to push a certain character to their breaking point. These inclusions are rather mild however and while there is plenty of violence and explosions to be had, a lot of it is very mundane and unlikely to bother anyone. 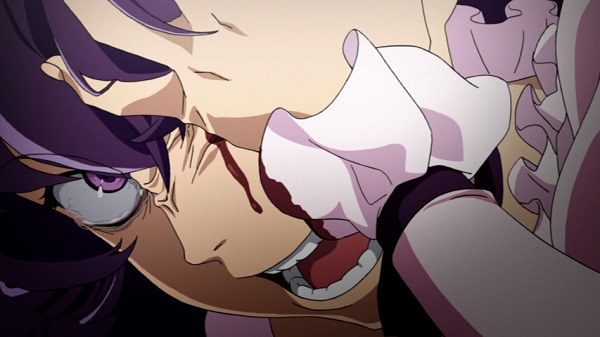 Now, as for the anime’s artwork and style, for a series that can be very dark at times there is a wide ranging color palette on display throughout the first half of the series and numerous backgrounds and environments are highly detailed. Each of the action scenes are nicely animated with little drop in quality and the characters themselves are varied enough and go through numerous outfit changes that the anime is always keeping things fresh. Unfortunately there are some animation issues with the characters’ faces in mid-range shots or group images, resulting in some rather odd looking facial expressions.

Audio
With FUNimation’s release of Future Diary: Part 1 the company has done the standard thing of including both the original Japanese dub as well as their new English voice track. While Yuno’s English voice actress, Brina Palencia, does a decent job with the character, the writing and portraying of her character is less extreme sounding than the one presented in the Japanese dub, instead her constant obsession with Yuki is dumbed down a bit thanks to her calling him various pet names. Outside of that the rest of the cast is nicely handled, though Yuki also sounds more capable than his Japanese voicework would let on. 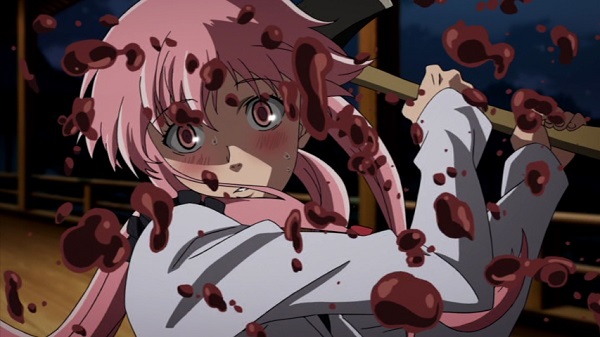 The series’ soundtrack in this first half is very impressive as there are numerous times that the action is made all the better by being accompanied by fitting background music. As for the opening theme, we have the very fitting and impossible to skip because it sounds so great “Fantasy Mythology” by Yousei Teikoku while the ending theme is “Blood Teller” by Faylan, which is also fitting and enjoyable to listen to, but not as much as the opening.

Extras
With the release of Future Diary: Part 1, FUNimation has included a number of on-disc bonuses but it is mostly their standard inclusion for releases such as this. There are clean versions of the opening and ending songs, original television commercials from Japan and trailers for other FUNimation releases and two episode commentaries. 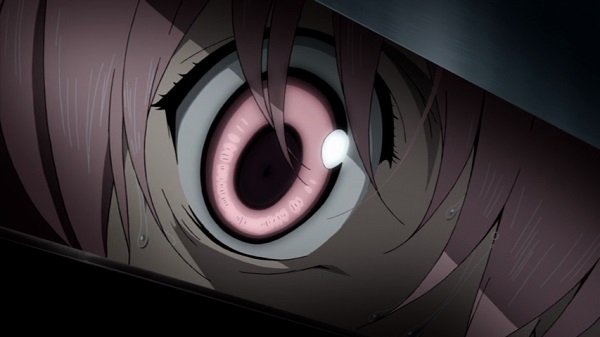 The first episode commentary is for episode 5 and features Emily Neves, who voices Minene, Ian Sinclair who handles the voice work of Yomotsu, and Rob McCollum who does Keigo’s voicework. The second commentary comes in at episode 13 and features Joel McDonald who does the voice for Kosaka, Caitlin Glass, the voice of Hinata and finally Ashleigh Domangue, the voice of Mao. It is interesting to note that this is Ashleigh’s first time on commentary and actually only her second bigger role in anime voice acting.

Overall
Future Diary: Part 1 may take somewhat of an two to three episode approach to many of its story arcs, but as the series progresses a larger picture comes into focus as the mysterious surrounding Yuno, her devotion to Yuki, the diaries themselves, and the various motivations of the bigger players still in the field lead viewers along a psychological survival game that has gotten rid of numerous bit players along the way only to leave viewers at the heart of things when the last episode of Part 1 finishes, leaving them dying to see what will happen next.