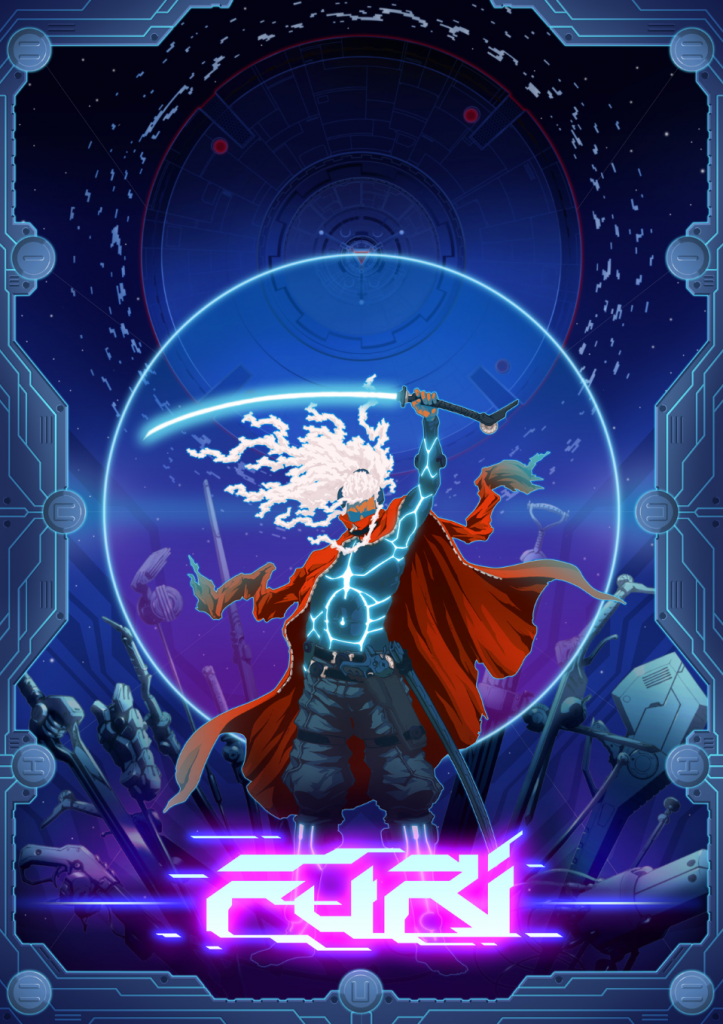 Furi is a new Indie action title by The Game Bakers with a focus on challenging boss battles. Honestly if the game hadn’t been free for PS Plus users I may have not even discovered it, but seeing the fast paced action combat in the trailer really sparked my interest. Turns out my interest was well warranted.

The short story of Furi is told sparingly between and during boss battles, where an Alice in Wonderland inspired mystery man cryptically describes the circumstances that led to the silent protagonists imprisonment in the first place. There’s not really much to it but surprisingly the intrigue presented here was enough to make me keep wanting to take down the next boss in the same sitting. The writing in this game is both well written and acted, with voice options presented in three languages, English, Japanese and French. 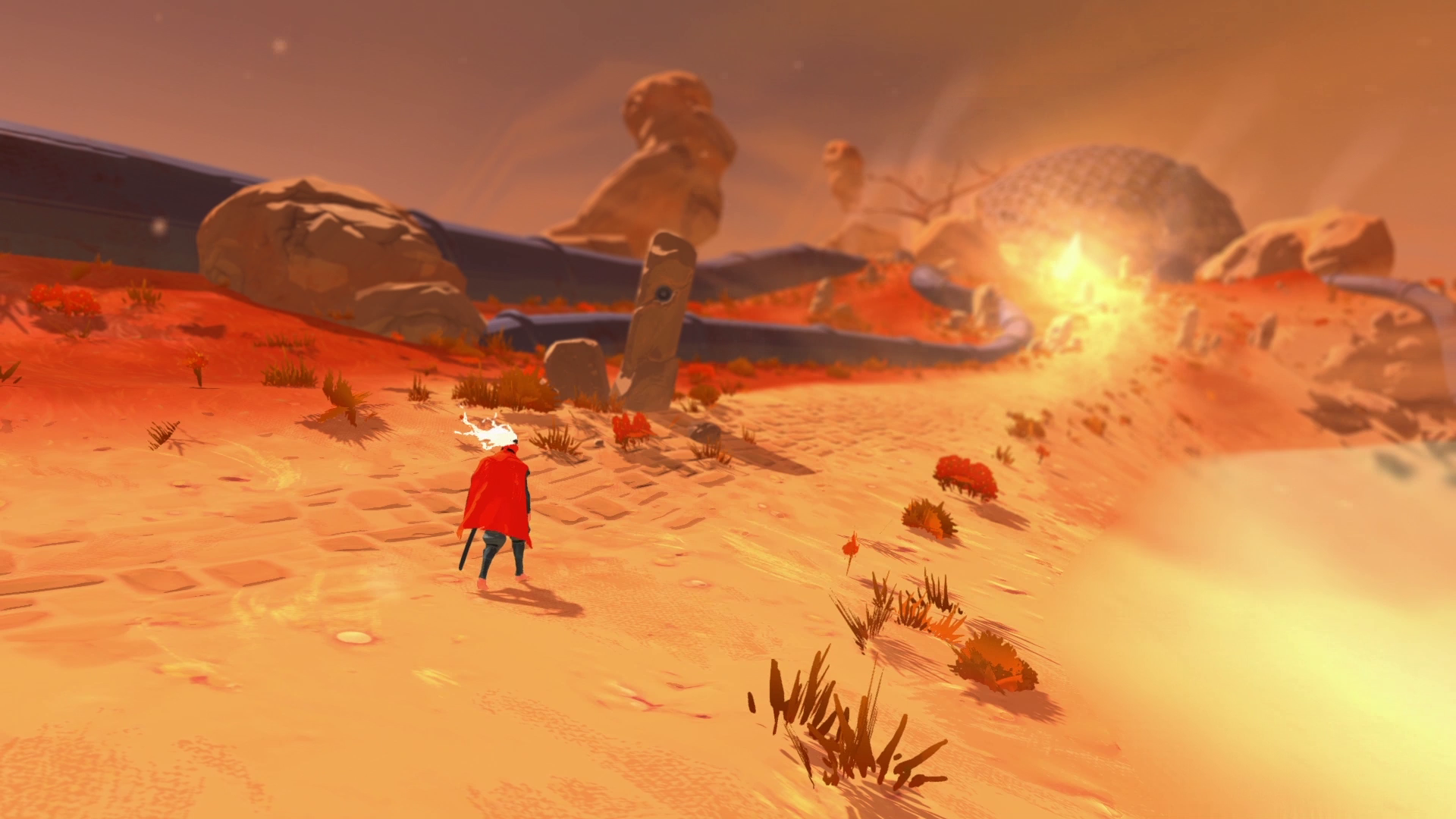 My main problem with the story is the way it is presented, on these long walks between boss battles. With such an interesting atmosphere and cast of bosses, some actual cutscenes exploring the back story to this mysterious world could have gone a long way. Instead you basically watch the main character walk very slowly (you can automate his walking with the X button or control him yourself) while the rabbit man talks, offering small details of what actual events took place or the boss you are about to challenge, interwoven with some interesting, yet fairly meaningless mystic babble.

For a game where the only gameplay is to fight against bosses, you would have to imagine that the combat and bosses themselves would have to be of a very high standard and I believe Furi delivers. Your combat options may seem limited, but the way you have to use these abilities in battles really shows the benefits of a smaller move set opposed to an action game with many different combos and special attacks. 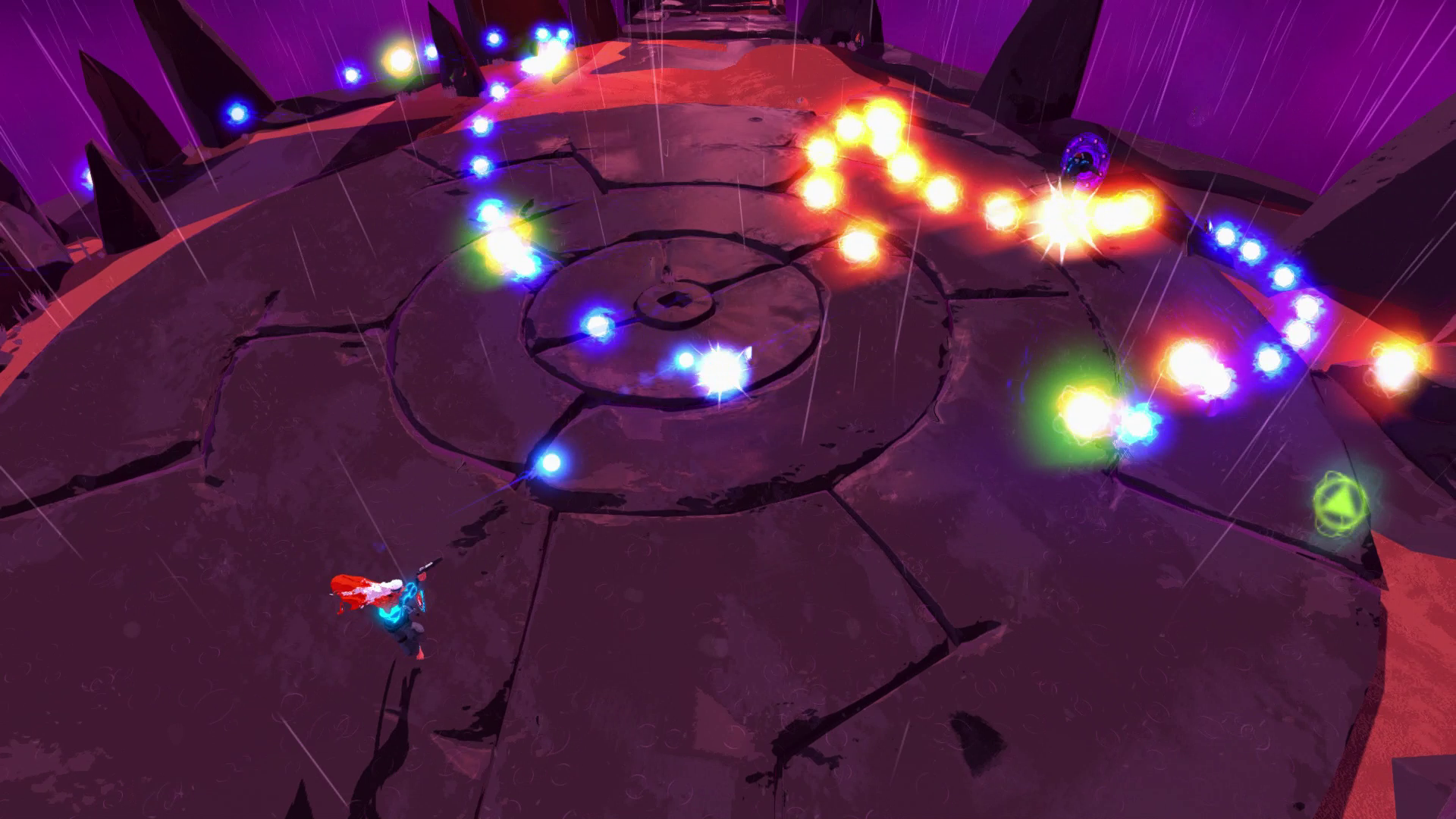 In Furi your arsenal consists of a melee attack that can be chained up to 4 times or charged, a laser gun which can shoot rapidly or fire a charged shot, a parry and lastly your dodge ability which can also be charged to cover more ground. Dodging, parrying and even just being smart about your movements are critical in surviving each encounter while striking at the right moment and continuously causing chip damage with your gun are the key to dealing heavy damage to advance the fight, ensuring you don’t have to survive as long. All these actions are performed with tight controls, so rarely can you blame anything but yourself for taking damage.

This struggle between defence and offence makes for an awesome combat system, and taking down one of the bosses is incredibly rewarding, especially if you do it by the skin of your teeth when you’ve got that adrenaline flowing through you. You may be thinking “Just boss battles? I’ll breeze through this game in a couple of hours.” Well you may be right if you play on the games easiest difficulty (which as an indication of how easy it is locks out the ability to earn trophies). I tackled the game on the recommended difficulty and I’ll be honest I’m pretty scared of how much harder it would get on the next level which requires the game to be beaten at least once to unlock. 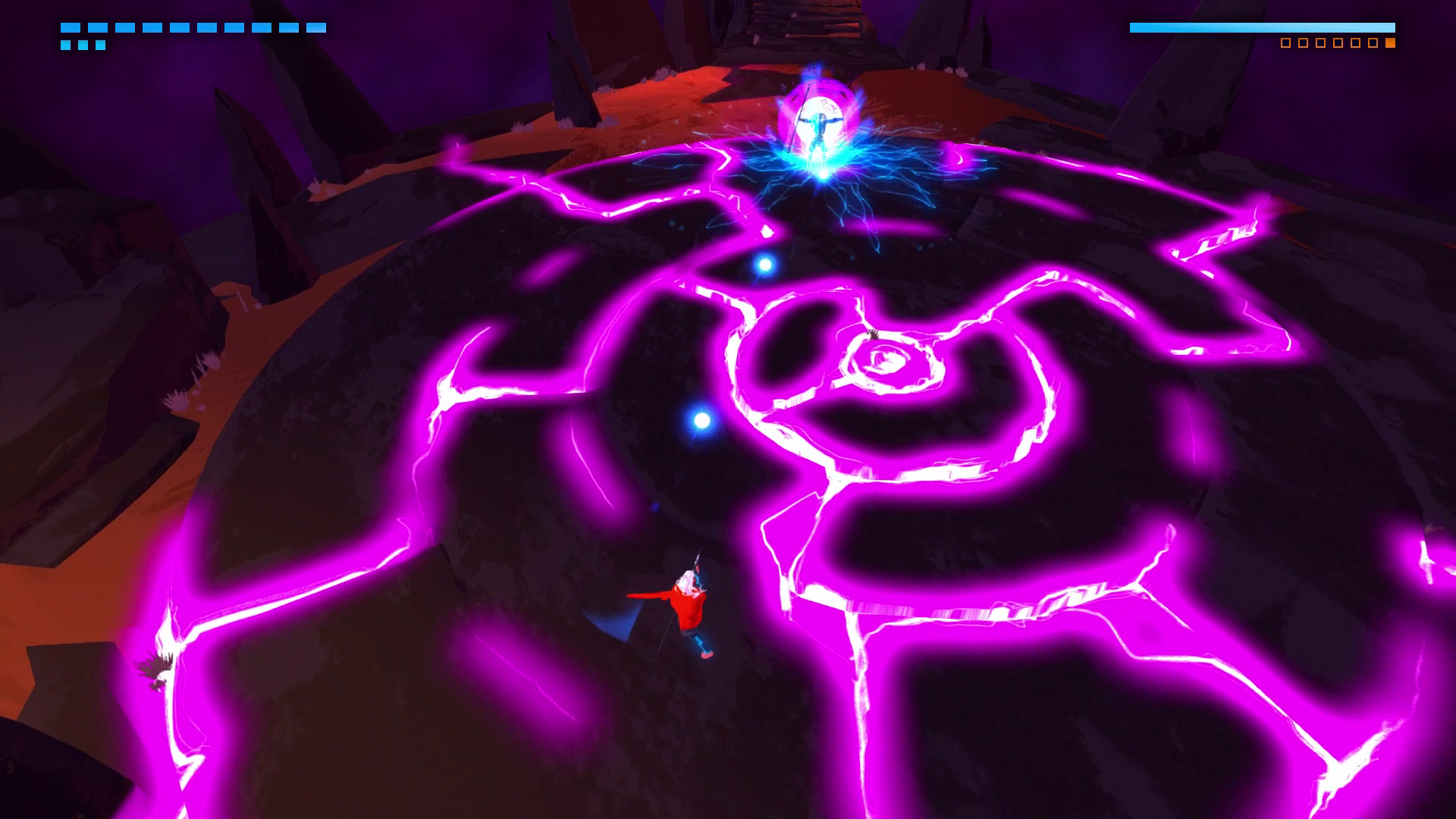 As expected, these boss battles are among the toughest I have faced in my 20+ years of gaming, requiring precise timing, spatial awareness and most importantly, a sharp reaction time to defeat. Each boss is different from the last. Sure even the more melee focused bosses manage to fire a laser beam at some point, but how they fire it and how that laser behaves are all different. The same goes for their melee attacks and how you damage them and most of the time this will even change as the fight progresses. Learning each boss and then becoming able to defeat is a rewarding challenge, even if the difficulty can get frustrating at times.

Now here is perhaps my biggest problem with the game. You probably won’t beat these bosses on your first try. Understanding their pattern and attack tells is the key to beating them. As expected, these patterns change moderately as their health bars go down, however the last health bar changes up the enemy drastically, where most will become invincible and just barrage you with screen filling attacks that will easily overwhelm you and probably pick up, in my opinion, a cheap KO. This problem is mitigated slightly if you manage to play well enough and bring all your bars of health to the last section of the fight, but otherwise you’re pretty screwed and you’ll most likely be restarting the entire boss fight again from the beginning which can definitely be a drag as it does take a while to get down these bosses health bars. 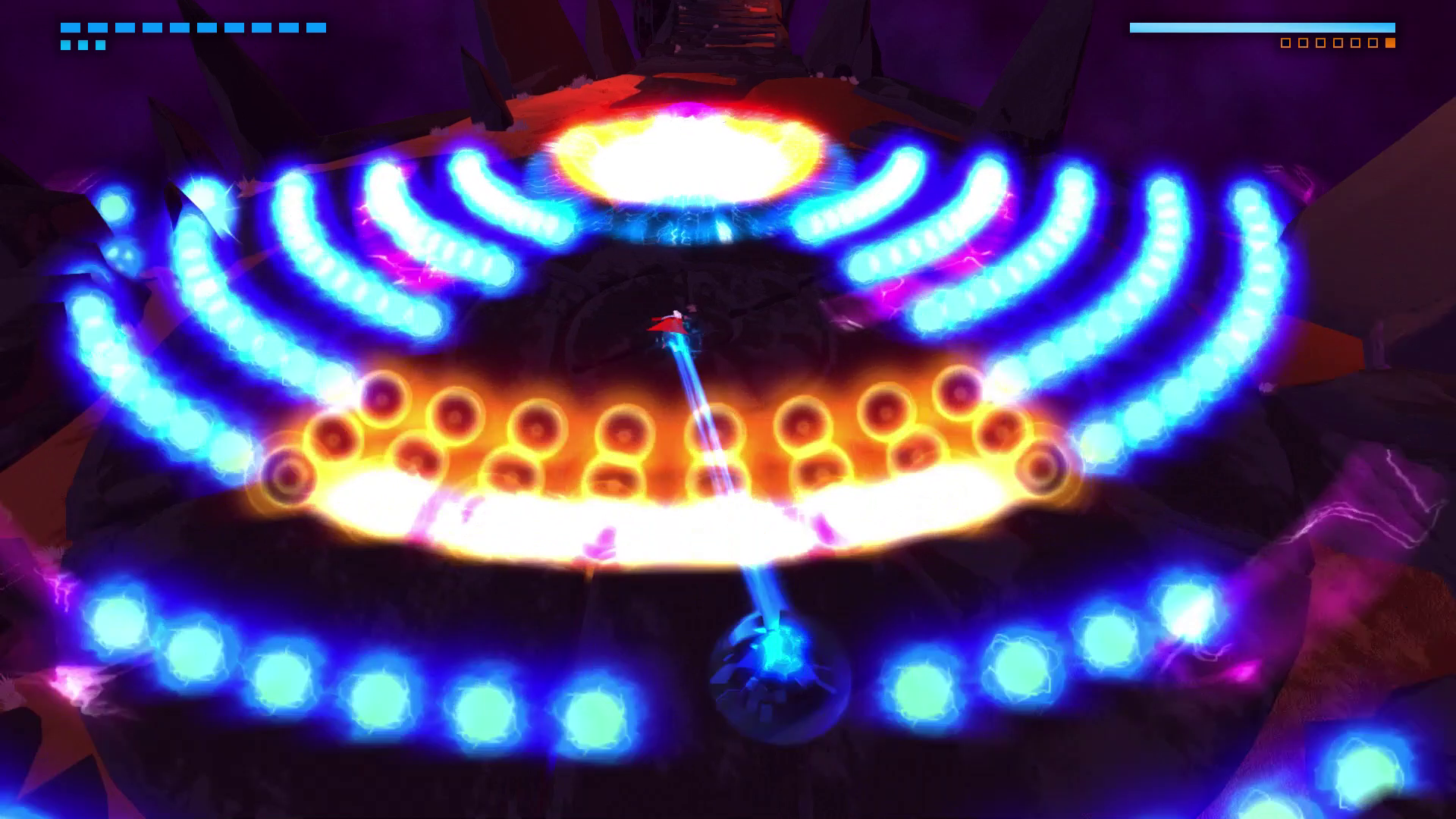 Apart from that issue though I found the gameplay in Furi thoroughly challenging and enjoyable. I really appreciated the fact that the main character and the bosses are for the most part, on equal footing in terms of ability as opposed to many games where the bosses have powers much greater than your own. This is best reflected in the games health system, where if you manage to knock off a bar of a bosses health then you get your own bar of health back and vice versa.

The graphics in Furi employ a low level cel shading effect that works really well in an edgy game like this and both the world and the character design make full use of this stylistic choice. The dark colour palette fits the games grim tone and contrasts with the flashy presentation of each battle. The all important visual cues give nearly all the information you need clearly during battle, with my only complaint in that regard being that similar colours can cause confusion, such as the green health orb attacks looking too much like the purely damaging yellow ones. 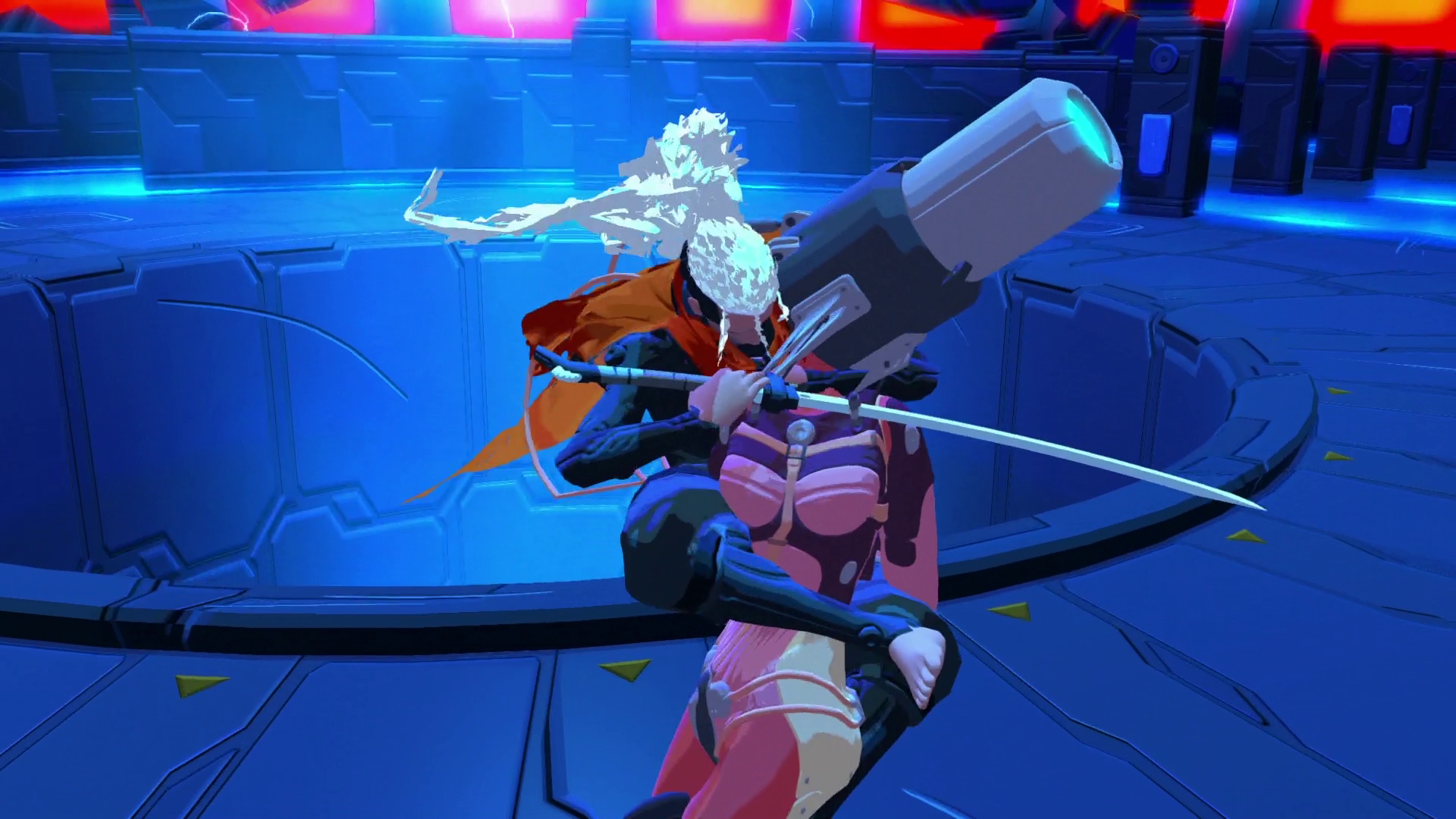 Combat feels impactful and looks sharp. All the unique animations for each fight such as for a perfect parry look awesome as well as are each bosses death scene. The game could have used a little extra polish, with some clipping and frame rate drops during story scenes (rest assured the frame rate does not drop during combat) and a few awkward transitions here and there, but for the most part Furi is well presented in 1080p at 60 frames per second.

The audio in Furi matches the game perfectly. Energetic electro synth music performed by well known artist such as Carpenter Brut and Waveshaper (I did have to look up these guys but their YouTube views give proof to their popular claims) compliments each boss fight and passageway, with a tonal shift in each one to match the environment or the story. Voice acting is excellent, with each character having a dark undertone to their performance that helps contribute to the games bad ass factor. The three voice languages are also appreciated as I feel a Japanese voice run would be fun to do on a second play through. 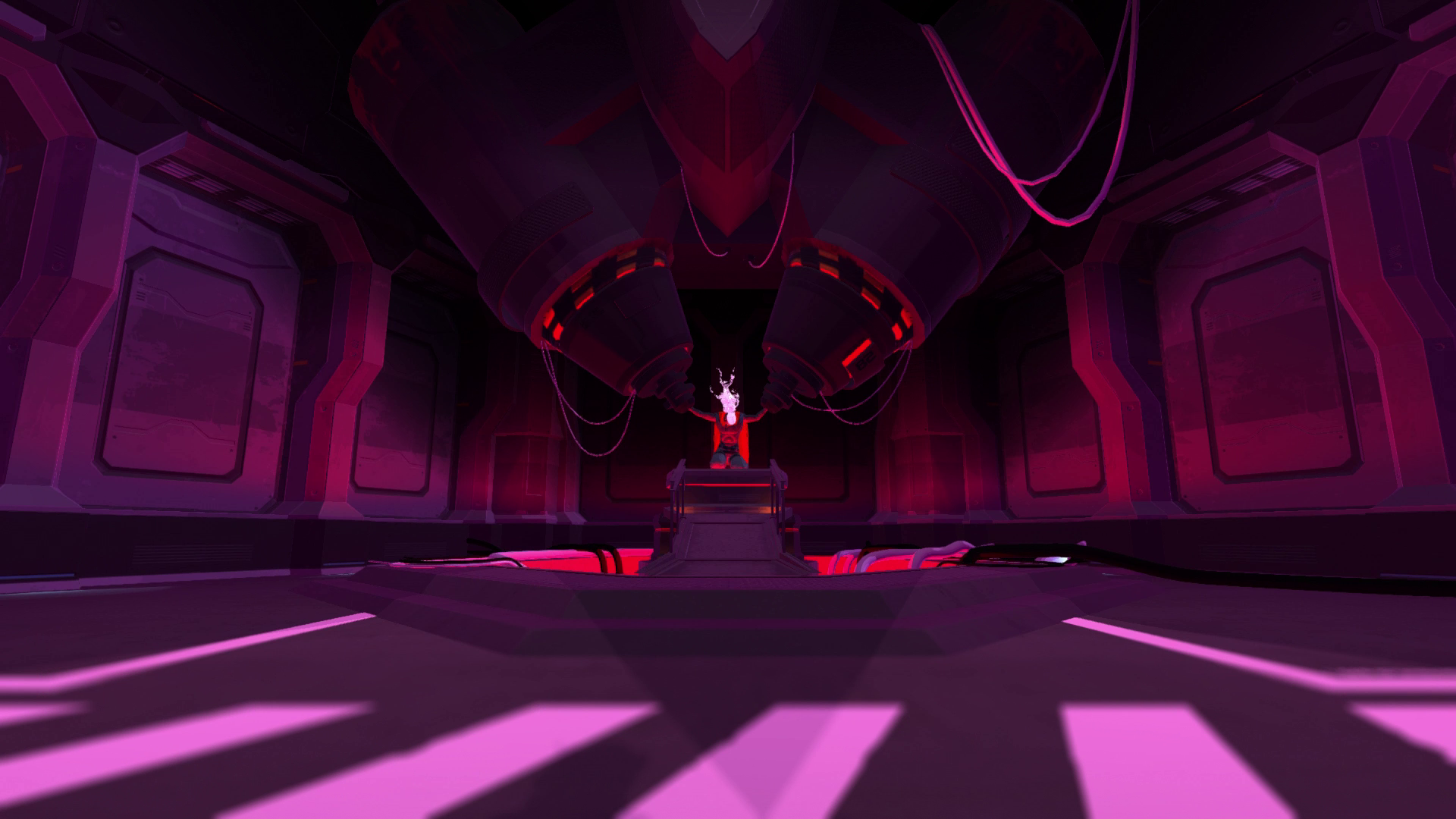 The sounds of combat infuse near perfectly with the visuals to make each encounter that much more epic and it was rare that there would be any technical problems with the sound outside of a few times where sound effects weren’t played.

Overall Furi impressed me as an Indie title. The core combat and challenging bosses made for a fun yet short experience with plenty of replay value for those keen on performing speed or no damage runs. The small story ties everything together with an intriguing narrative and each boss characters loud and unique personality is bound to leave some sort of impression on you. Furi has it’s issues and perhaps a bit high of a price tag, but this is a tight action game full of personality. If you love games like No More Heroes or boss fights in general then Furi is definitely worth a try.