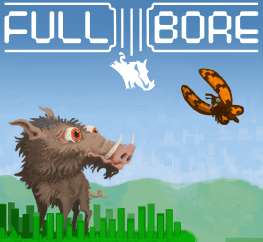 Release the hogs and prepare to burrow into Full Bore: The First Dig, a puzzling adventure that leads players into a crawl space of claustrophobia, mine traps, mysterious ruins and treasures within the mining grounds. Whole Hog Games allow players to dig deep as the boar and discover what is buried below the surface; for it may be Boredom or a Bore Legacy of indie games.

The narrative is grounded by the title of the simulation and is fitting for a prelude to the saga. In Full Bore: The First Dig, players follow the journey of one boar (Frederick) or sow (Hildi) as they venture through an underground abyss, recovering stolen gems to return to The Vault that Mr Gullinbursti owns at Full Bore Mining Co. The storyline unveils as soon as players enter the mines and continues to develop with their depth of exploration, uncovering evil boars and more within the vast mine shafts. 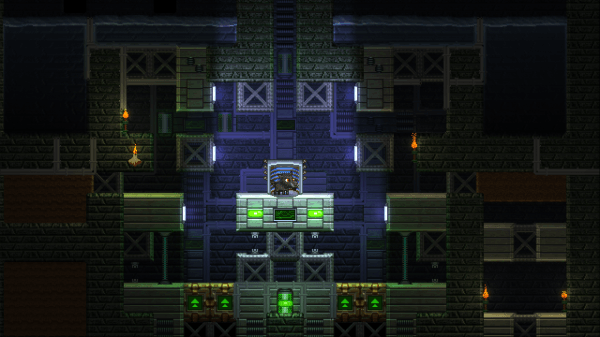 The unique gameplay is distinguished not only through character choice, but the diverse environment and fascinating atmosphere that frames Full Bore: The First Dig. Players are encouraged to undertake the adventure at their own pace, building the contents of the map as they travel deeper into the world. I thought it was interesting to have all players enter the game on the same level of difficulty; focusing more so on their ability to solve puzzles in single-player mode, rather than enforcing a particular standard of expertise for competitive gameplay. However, the free nature of gameplay is misguiding to an extent, and can impact on your level of commitment to completing the entire game.

More specifically, it is easy to lose track of where you’re supposed to be heading and spend hours trying to figure out the best way to move properly to reach the next mine shaft or hidden gem. I can admit that I found myself fumbling my fingers on my keyboard several times between W/A and W/D, trying to dig and climb up blocks without changing course down blocks. It takes a while to get accustomed to the keyboard configuration for movement; especially during high speed races against boars to the bottom of the mine, if you don’t customise your settings. 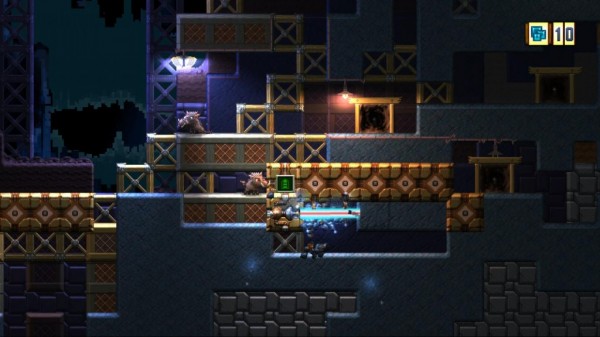 Gameplay involved a lot of experimentation; in the case of moving blocks to cross new boundaries and learning what types of blocks were transparent, destructible, can be stomped on and various machinery for initiating laser beams and automated elevators. The highlight of playing Full Bore: The First Dig was exploring different ways to solve puzzles by rearranging blocks and digging through sand and soil to create new tunnels within each mine shaft, similar to the style of gameplay in SteamWorld Dig.

As players progress further into the game and attain more gems, the puzzles become more challenging and require quick-thinking and building on movement skills. During the more difficult stages, it was extremely frustrating to go through the same repetitive process of re-creating the same path I failed to complete the first few times – due to becoming trapped by collapsing blocks and falling over the edge. Fortunately, players have the power to zap (teleport) themselves back to their previous checkpoint to avoid disastrous situations. Without this ability I would not have got through the puzzle Nowhere to Go But Down, which involved racing Wotan’s unstoppable rocket down the shaft to prevent high impact explosions from the passel of purple crates. 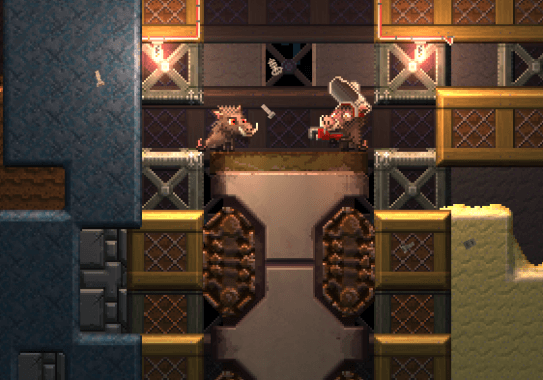 The 2D pixel art style is visually stunning; in terms of colour scheme, layout, character and object design and the contemporary lighting techniques within the game. The contrasting crumbling mine and machine-driven environments create a blend of an ancient and revolutionary world for players to discover.

I was genuinely surprised and very pleased with Full Bore: The First Dig’s original Glitchin’ Blues soundtrack, composed by Miguel Acuña and The Adjective Plural Noun. The rhythmic blues score effectively balances the dreary mood and theme of manual labour; from ‘The First Dig into Hard Earth’ to the final stages of ‘La Cueva Oscura’ in the Mechanical Castle. Without the inspirational instrumental soundtrack, The First Dig would not have been possible for players to complete, as all miners need a tune to dig to.

As a whole, Full Bore: The First Dig breaks new ground and gives players a reason to keep digging for the next edition of the saga. The underground puzzle adventure stays true to its genre; constantly testing players to solve challenges and look outside the blocks to capture the boars true surroundings. Whole Hog Games deserve credit for successfully funding their Full Bore project on Kickstarter and creating a Bore Legacy for additional indie titles to follow suit.