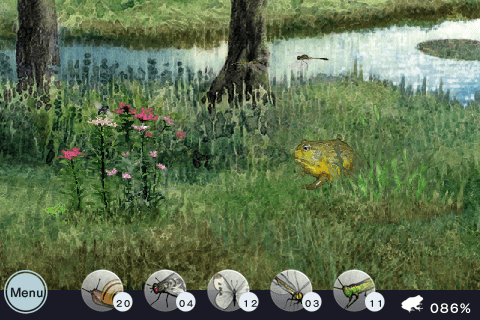 As I stated above, Frog Minutes isn’t a game in the typical sense. It’s actually designed to be more of a relaxation/educational tool. The game world consists of just one screen that you explore. You start off with one small location to prod at, making a frog or critter (frog food) come out. The more you play the more locations you find to check for frogs or their food. You catch frogs by fattening them up by feeding them things they like. Because they’re all classy and require you to buy them a meal first. You can catch grasshoppers, dragonflies, butterflies, flies or snails. When you decide on a frog to capture, you simply tap on it which will display a thought bubble of what it wants to eat. Just feed the frog what it wants until it’s full and it’s all yours for the taking. 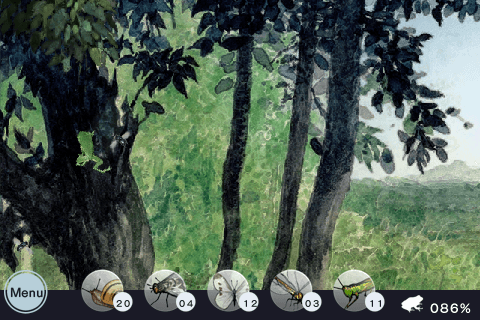 For every new frog or critter you capture you’ll be rewarded with an entry in your field guide. The field guide is an encyclopaedia of everything you catch and provides you with some real world information on the subject. Every entry is narrated in addition to being written out. There are a total of 10 frogs for you to find and 5 critters. There’s also a list of in-game achievements which complete a picture the more you play the game. Game Center leaderboards and a single achievement are available for you to compare yourself to all the other frog hunters in the world. There isn’t much verity in the game play and you may grow tired of simply catching bugs and frogs, but I’d say this is perfectly suited for a small child. They’ll learn something about frogs and critters and get some interaction as they do so. 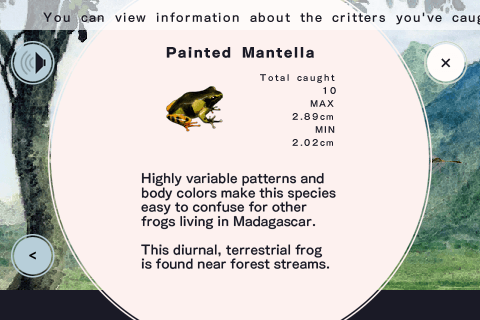 Frog Minutes is a very… zen like game. Everything is hand painted with water-colours and has a great look. The leaves and stream shimmer and move appropriately enough and all the frogs and critters animate, if a little rudimentary. The thing is, this game isn’t really about giving you super awesome graphics. Everything is very peaceful and deliberate. There’s no real music to speak of. There’s just the sounds of the environment. Every frog has a distinctive sound when found and the rustling of the grass and leaves along with the sounds of the stream and nature all certainly give you a calming sensation. It’s all very inviting. I feel Grasshopper certainly accomplished what they set out for with this. 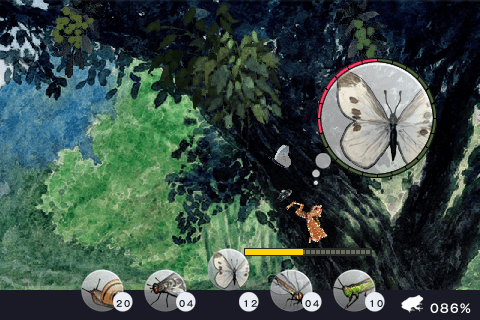 I have to say, this is a tough title to review. There really isn’t a lot of gameplay in the traditional sense of the word, but that wasn’t what Grasshopper was going for. You have to know what you’re getting into when making a purchase here. I’d recommend it for a small child, or if you want to just zen out with something that’s slightly interactive. I don’t want to compare Frog Minutes to other games as that’s not it’s intention, as it’s not really a game in the same sense. If you’re looking for a deep experience to entertain yourself with this may not be the right thing for you. However, if you’re fully aware of what Frog Minutes has to offer and that sounds like something you’d be into then I implore you, download away. Besides, your money will be going to a good cause.