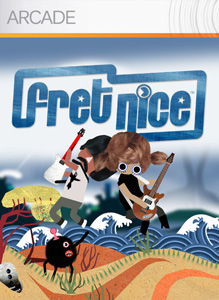 Story
“Fret Nice is a 2-D platformer that will rock your world. Control your character through funky-fresh stages to explore hidden areas, collect items, and clash note-for-note with outrageous heavy metal bosses! Rock out by blasting enemies with riff combos and creating your own sounds with each “strum” of a chord! Every playthrough offers an ever-changing sonic adventure.” [Via Xbox.com]

The story is about a band called “Vibrant Chordblast” becoming the best band in the world, but a group of bad guys from Heavy Metal Island dislike the music. They wreak havoc on the world, and you as the hero must use your musical abilities to defeat these creatures and save the world.

You traverse through many levels defeating these monsters and bosses. Newspaper articles through the game reveal a bit more of the story, but not that much. If you skip all of the newspapers you won’t be missing anything big. 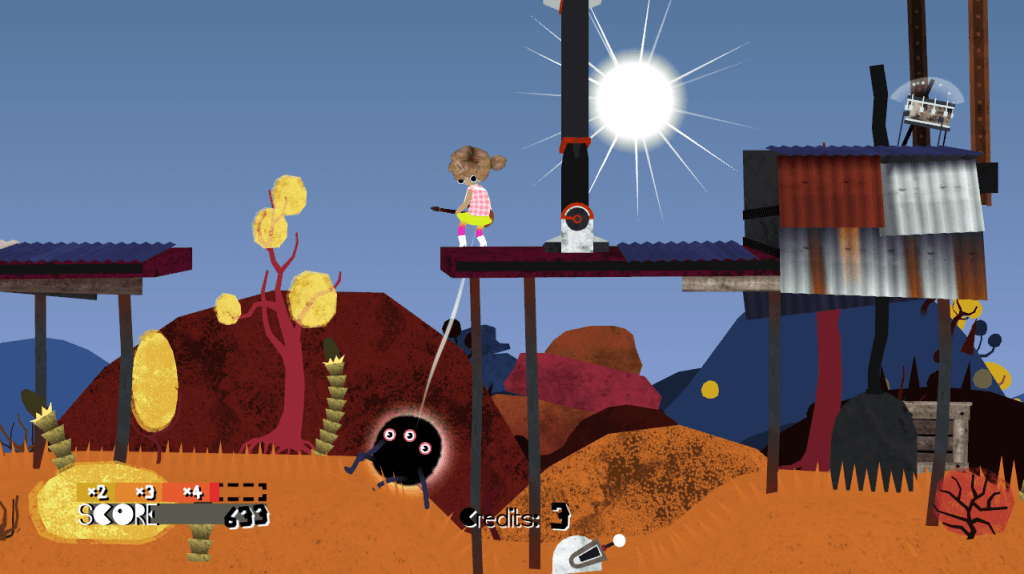 Gameplay
Fret Nice is pretty straight forward, but the gameplay mechanics are extremely complicated. The gameplay mechanics are so complicated in fact that they take away from the overall experience of the game. You can either play using a guitar controller, or a normal controller. If you want the most fun out of the game I’d suggest to just sticking with a normal controller, but if you are all at a party and want to have a good laugh use guitar controllers and play co-op. Have a competition to see who can stay alive the longest, or who can do better with the guitar as the controller.

The game comprises of 2 different control setups depending on which controller you use.

Guitar Controller – Strum makes you strum within in the game, in mid air it will count as a strum, while on the ground it will either let you run or climb. Tilting makes you jump.  Frets count as different sound keys for killing monsters while you are in midair. The green and yellow frets move you left and right. The whammy bar lets you soar through the air. You can also strum to use your helicopter power up, and hold strum down to use fire boots. Whammy bar lets you fly with a jet pack. Finally the orange fret lets you use bubble gum, as you can see these controls become extremely complicated when trying to kill enemies.

Controller – The controller controls are much easier, and let you focus more on enjoying the game over trying to use the right controls. A lets you jump, and pressing A repeatedly in the air lets you soar. Tapping X lets you run and climb and you can move with the joystick. Finally the left & right triggers, the left & right bumpers and Y are the notes you can play. As you can see the controller leads to much fewer complications.

This may seem pretty straight forward but it becomes extremely complicated when you use the guitar controller. Since 3 out of the 5 frets are also used as other things, it is hard to tilt the guitar to jump, then strum and fret a certain combination. On top of all this, whenever you use the green or yellow fret button, you will move left or right. Moving while trying to kill an enemy makes killing an enemy extremely difficult.

There are a few nice features within the game. There is a huge focus on customization, which lets you unlock new clothes to purchase as your progress through the game. There is also local co-op so you can play the game with a friend. Sadly the co-op is only local, and it would’ve been nice to have Xbox live support in this area. 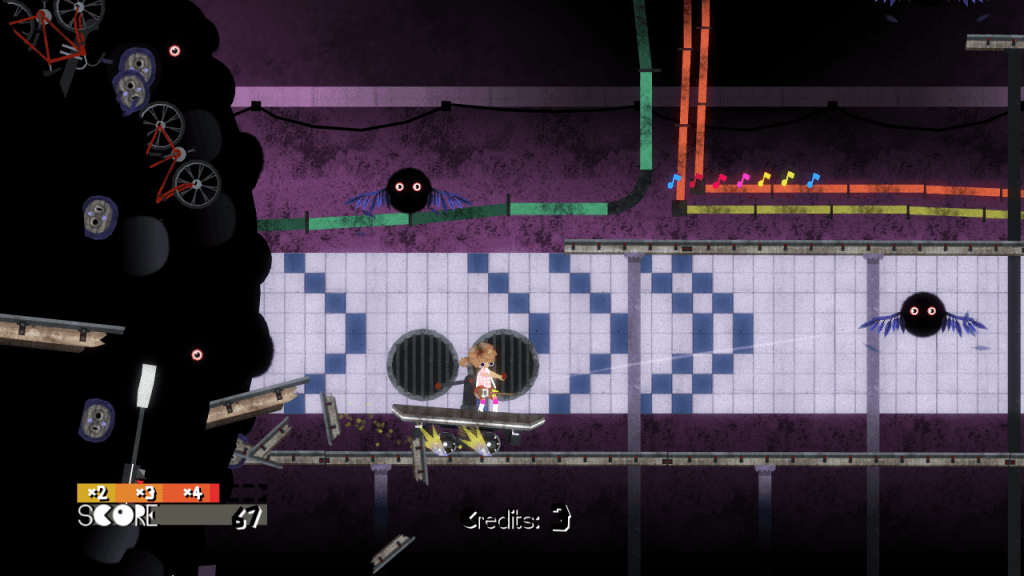 Audio
The game is an Action game with a focus on audio. You are able to use a guitar to play, so I would hope the audio would be able to back it up. The game does not disappoint in this field, the main menu song alone is extremely catchy.

As well as the soundtrack being good, whenever you strum (or hit a button) to kill an enemy, the strumming noise matches the current tone of the music being played. This integration enables the game to give you sound effects without taking away from the overall music.

Achievements
Fret Nice has some pretty complicated controls, running through the game using the guitar is going to be pretty hard, let alone getting every medal. Every level consists of 10 medals and they are no easy task. Not to mention Hard mode, but even that is easier then getting all the medals in the game. If you play a game solely for the achievements, this is not the game for you!

Overview
Fret Nice is a unique experience, but so much is put into trying to make it unique that it loses some of the fun value. Fret Nice could have been so much more but it falls behind due to these complicated gameplay mechanics. If you want to have more fun in this game, I’d suggest to just sticking with the controller. The guitar experience is nice, but it is lacking and doesn’t feel as smooth as it should have been. Fret Nice is a unique experience but the gameplay could have used some polishing up, I give Fret Nice 6 Capsules out of 10.