Two Tribes’ latest DSiWare title Frenzic is a puzzle game, but not quite what you would expect. Using the touchscreen, you must fill a pie-styled circle with certain colored while on a short time limit. With power-ups also in the mix, Frenzic attempts to show the DSiWare a new puzzler on the block with it’s unique style and gameplay. Here is my review. 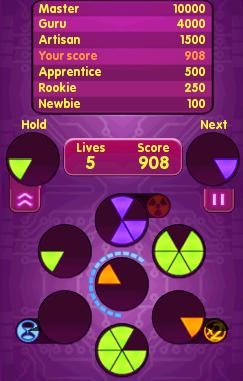 Gameplay
Describing how Frenzic plays is kind of tough. It’s not that the game is complicated by any means, as I assure you it’s not. Frenzic is just not your typical puzzle title. When you start up Frenzic, you are greeted by a standard menu screen and with one tap, the game gets started. Everything has an extremely simplistic layout, which at first I was thinking “That’s It?”, but soon after the gameplay made me forget about every other thing that was going on as Frenzic is truly addictive.

Each game starts off with 6 blank circles surrounding a center circle. A piece will pop up in the center and you must quickly assign it to an outer circle before the timer runs down by tapping where you want to place it. Each piece is specially cut so that it looks like a pie piece with six pieces making a whole pie. The object of the game of course is to fit each piece properly and make a complete pie and keep going until you are out of lives to score as high as possible. After you fill a pie, it becomes blank and you do it all again as the speed raises. With the pieces being one of three colors, the game has you pick and choose which colored piece should be applied wherever you see fit to place it.

The whole concept is simple, but the timer is what makes Frenzic live up to it’s name. As you place pieces and fill circles, you must keep in mind two things. The first is of course the timer as it drains rather quickly so you must fit a piece in the six circles as quickly as possible. The second thing to keep in mind is the colors. When you combine a circle of all of one color, more points as well as an extra life are rewarded. It may sound simple, but the variation of pieces make this a game of strategy and reflex as past moves can come back to haunt you if you are too busy focusing on one color. 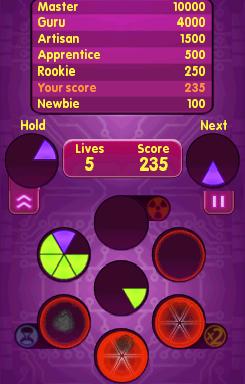 One thing I thought was great is that while lives are needed to keep in the game, you must use them as apart of your strategy. There were many times while I was playing Frenzic where I had to sacrifice a life to “skip” a wedge that didn’t fit with any of the pies on the screen. There are also pies that have power-ups attached such as a x2 score, the Nuke, which clears the board of pieces, and a timer which can slow down the game for a few seconds. Holding pieces also can come into play as well, so there is quite a bit to keep up with to fully master everything. With the game moving faster as you progress, you must utilize as many of these power ups as possible if you want to continue racking up points on the current game.

A personal score-board is also added in the game which has 7 scores for the player to achieve, all the way up to MASTER. This score-board to me made the game that much more addictive as I was trying to topple each score and playing hours at a time. The fast-paced gameplay and life system may make for shorter games, but the urge for jumping right back in each time was always there.

Graphics/Audio
Everything in Frenzic looks bright and sharp even though the standard menus are a bit simple, but none of that really mattered as I was so deep in concentration I didn’t even bother to think about menu design too much as they are not a necessity in Frenzic whatsoever. The shades of colors all really contrast really well against the colored circles so it is easy to apply full attention to the pieces and pies. The game also gives you an option to change the colors of the pieces which was a small, yet great addition which I used a lot to change things up visually. 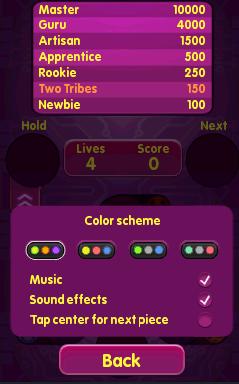 The music in Frenzic is rather generic but it fit in well with the hectic gameplay overall and after the hours you spend playing this game, you are bound to be singing it’s tunes wherever you go. Sound effects are pleasant and also flow nicely with the game. I do feel some more variation of music would have been great as well as some sharper sounds, but as I said, the sound does not affect much of the game at all.

Overall
Frenzic was quite an experience it is really simple to learn, but as I progressed through I got better at playing it and there is an infinite amount of strategy buried underneath all of the simplicity. The whole game just feels original and for the price is well worth the 200 points spent as the game is so addictive you will never look at a real pie piece in the same way again. Frenzic is one of those titles you will want to play again and again and it would be a true shame for any puzzle fan to miss out on this hectic yet strategic title as it is a perfect fit for the DSi.

I give Frenzic for the DSiWare: