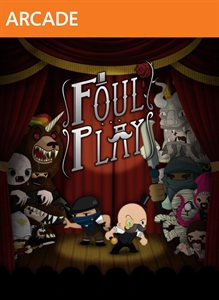 Overview
A quick glance at this title will have many indie gamers instantly wondering if Behemoth had some sort of involvement. While Foul Play may look like the adoptive brother of Castle Crashers, it has been created by developer Mediatonic in Great Britain. Other titles that you may or may not recognize are Amateur Surgeon 2, Superbia, Monsters (Probably) Stole my Princess, Who’s That flying?, and Robot Unicorn Attack (Evolution). However, this is the first time the British based developers have taken on a side-scrolling brawler as a project. Let’s take a look at how they did.

Story
Foul Play certainly operates unlike any game that I have ever played. Setting itself apart from other side scrolling brawlers is actually the presentation of the title’s story. Once the game opens we are welcomed to the abode of Daemonologist Baron Dashforth and his most trusted sidekick Scampwick. Yet what we are witnessing is a stage set for Baron’s most incredible adventures filled with hired actors to provide memorable battles. Each act of Dashforth’s life yields new acquaintances as well as new obstacles for the player to overcome thanks to a young boy in the front row… 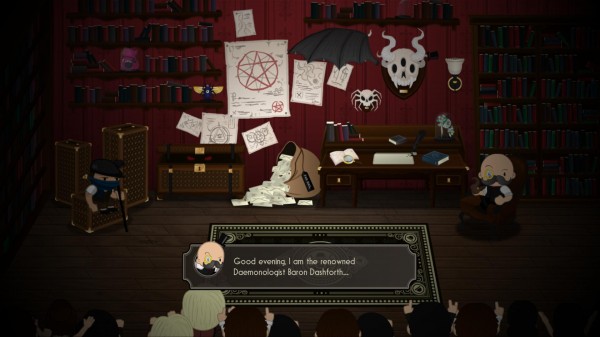 The context of the background story means to be humorous in its delivery and is quite noticeable immediately. When you have the play’s janitor randomly appearing in the background – not doing his job, you are made aware that the play is simply a performance in itself and you are the one to deliver the excitement to the audience.

Gameplay
Side scrolling brawlers tend to be plenty similar with one another, and this section will help distinguish if Foul Play has extraordinary characteristics. Finding differences came easy as Foul Play leads an alternative look towards the user interface, multiplayer, and inventory/weapons. Health is technically non-existent as your character’s existence thrives off of the audiences’ mood. By performing subsequent hits on enemies you attain higher combos which pleases the crowd and increases your mood meter. However, taking too many hits can result in a very unhappy audience with your arse kicked off the stage. Actors portraying enemies have a set life counter to them, but the player does not see this. 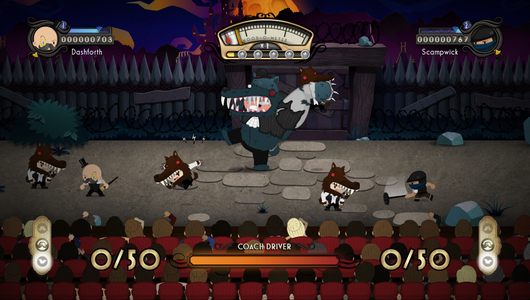 Multiplayer is essentially the same in theory – being able to join another person online or play co-op offline. But players like myself want the whole package deal. Side scrolling brawlers give off the visage that you can have four players on one screen playing at once. This is an aspect that Foul Play does not include, and I can safely guess due to story direction. By creating a sidekick – Scampwick – the game’s story portrays two adventurers with dialogue that cannot be as appreciated with a third or fourth player.

Another attribute that may alter a gamer’s view of the title is that there is not a true inventory nor additional weapons to be attained. The cane and broomstick are what you get – not saying you cannot beat someone senseless with these… Considering the inventory, you may equip two charms/squabbles that you have attained prior to entering a performance. These items can be attained by performing all three goals listed next to the chosen act. Such goals could ask you to “Kill the Leader Last!” or to “Find the Second Mate! under 5 minutes”. In addition the squabbles will grant you bonuses like “+3 bonus for combos on successful block”.

Both negative and positive, the game can be completed by using the same move list repetitively. By pressing (Y) multiple times in a row, Dashforth performs an uppercut swing with his cane and continues the upward motion by jumping whilst swinging – twice if you button mash – and then lands a blow on the ground ending the attack chain. By doing this attack alongside your guard (B), you can utilize only these two buttons and complete the game. New attacks can be learned, but you will find your favorite combo and just bloodstain your controller there. 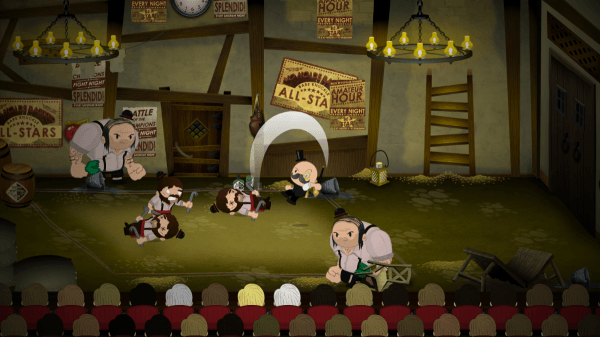 Difficulty settings are not present in Foul Play. With that being said there are accomplishments and goals that can be reached by completing tasks in a certain amount of time or by performing move combos. After completing the game an initial time, you may challenge yourself to garner a 5 star rating in each act or to complete each of the three goals given. There are plenty of collectibles to keep your interest generated while maintaining a fun brawling title for you and your plus one.

Visual
Visuals tend to make a title attractive or memorable, and such attributes are found in Foul Play. Let’s first start off by looking at the main character Baron Dashforth. As I began playing my wife decides to chime in and ask me, “is that the Monopoly guy?” Now if I were to ask her a few weeks from now what game I was playing, she wouldn’t have a clue. But all I would have to say to jog her memory would be, “remember? It had that Monopoly guy.” (Foul Play = Memorable) 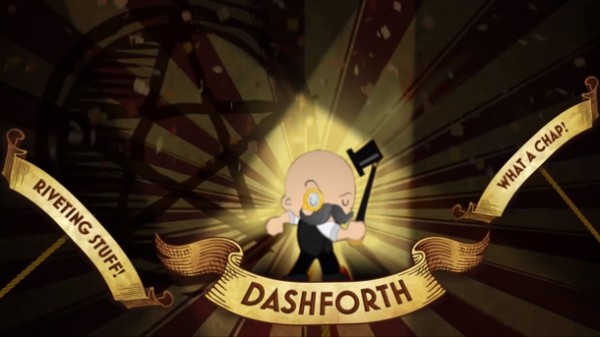 Both characters and environments have been implemented well according to the “play” theme. While experiencing each act you are subjected to new visuals in both stage setting and non-playing characters (NPCs). Mummies, werewolves, pirates, and more are all part of the intrinsic play and thus demands acts to dawn the appropriate attire. For flying enemies straps can be seen propelling their movements in the air. And the outfits provide a comical approach as well considering you can see individual actor’s heads within certain attire (i.e. werewolves, gargoyles).

One negative look on the visuals is that the stage itself is constantly changing, but the audience also shifts. Now are there mechanics such as a treadmill set up to allow this to happen? Since everything else has been made transparent to the gamer, a bit more commitment could have made this game nearly flawless in delivery. Such instances with daemon bosses can be noticed as well where special powers seem to be caused by actual daemons rather than actors. Otherwise the developers were too trixy for their own good.

Audio
Perhaps most interesting about Foul Play is that while every action is being “acted” out, the enemies themselves do not actually die. Instead of dying, actors fall to the ground and appear to be dead. Grunts in junction with cane/broom whacks propel this sense of “killing” yet none are killed in the process. I felt reprieved when I noticed that these characters I thought to be dead were – not so secretly – crawling off stage. Sound effects definitely enhanced the feeling of dishing out a lot of damage but fooled me to believe that the characters were dead.

Overall
Mediatonic has done well with Foul Play by making the title attractive, addictive, and memorable. Though the game may have some attributes that could be more desirable, this button mashing brawler will keep you up all night. Throw a partner into the mix, and you will certainly have a blast beating up some pretend baddies with a cane and broomstick!