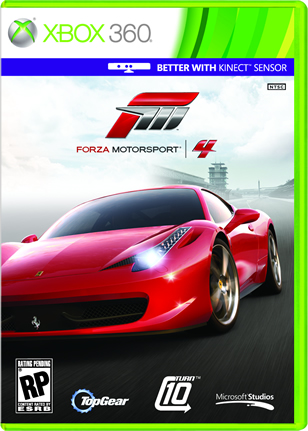 Forza is game that took the approach of creating a realistic racing experience. For lesser franchises, that has spelled doom. Whilst creating a real-to-life racing experience there will always be the naysayers who will claim something to be too fantastical or even too complicated a task than necessary. Forza stood against those preconceptions against realistic racer titles.

By breaking down the barrier between hardcore racing fans and casual gamers, Forza created a true racing feel that could be played by anyone and with each subsequent installment they have improved upon their winning formula. Now here we stand with Forza Motorsport 4, the pinacle of the series by all counts. I would even go as far as to say that Forza Motorsport 4 is the pinacle of the racing game genre. 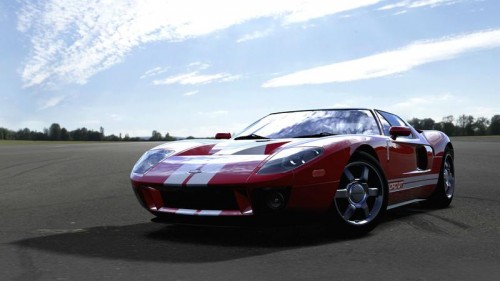 Gameplay:
Never before has there been a racing game with such high level production as Forza Motorsport 4. Everything about this game is polished to perfection. The game plays like no other racing game, that is putting it lightly.

There is a multitude of features and gameplay modes in Forza 4, providing essentially infinite replayability. I found myself absolutely enthralled with the complexity of the game as well as astonished by it’s simultaneous simplicity. There is evidence of loving attention to detail oozing from it’s every inch. So what are these features and what do they contribute to the overall game that is Forza 4?

I think the foremost important facet of Forza 4 is it’s racing mechanics. Let me first say, there has never been a racing game this realistic. From the most minute details to most apparent, there is so much thought placed into making this feel just like you are driving a real vehicle. With the Kinect feature, that is even more strongly felt. 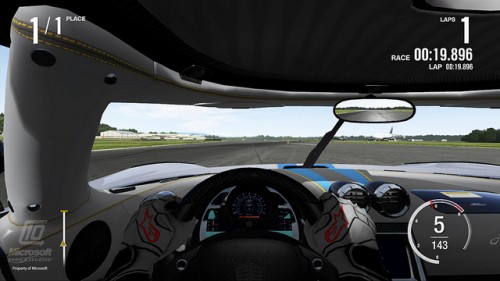 There is definitely a feeling with the Kinect play that you are controlling a real car. However, I may have chosen a bad place to start on as I did have a problem with the Kinect play. It feels a little unnecessary is all. I know it’s trivial reasoning, but it just could’ve done without it. I don’t feel it necessarily added an experience that playing with a regular controller didn’t provide. But that is not to say that I did not enjoy it.

The stand-out part of racing in this game is that you can have it both ways. You can play it the complex way or the simple way. Now when I say this, I say it with whole-hearted glee – I could play this game with one trigger and a control stick. That to me was part of what made this so exciting. I could play it simple or I could complicate things by introducing gear-shifts etc. thus providing more of a challenge. This is one of many customisable portions of Forza 4 that shine through. Whether you are experienced in the racing genre and want a challenge or just want to simply race without too much thought, Forza 4 has you covered, effectively allowing anyone to enjoy playing this.

That is only touching the surface of this monster. When playing through the Career mode there is an unprecedented leveling system, that would rival that of some RPG titles. It is both addictive and fun, providing an incentive to keep racing as well as opening the door to strategy in picking which races to participate in. As different races will give you experience points to different things, such as driver level or your affinity to a specific brand of vehicle. I was simply taken by surprise at the improvement over Forza 3 when it came to this. While Forza 3 provided a fun leveling system, Forza 4 has polished that same system and turned it up to 11. There is simply no system even close to this in any other racing franchise.

The career mode is an absolutely engaging experience that will have you glued to your Xbox for hours on end. With competition races and even a little guest appearance from Top Gear, there is a lot to do. I never thought I could compare a racing game to an RPG game, but honestly with Forza Motorsport 4, you will be putting in some long hours to advance yourself through your driving career. 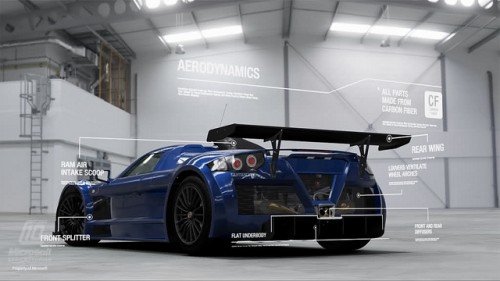 I know what you are thinking – How is the multiplayer? Well I was lucky enough to try out the offline multiplayer, but due to lack of online players, I was unable to fully grasp that side of it. From what I could see is that there is plenty of new features for online multiplayer, the most interesting of all is the ability to create or join a Car Club (essentially a guild or clan from MMORPGs). Unfortunately I did not get to play any online though to test things out. However, judging from the split-screen offline multiplayer, there is a lot of fun to be had.

You are given a plethora of options to modify as well as an enormous amount of cars to choose from (My inner-geek loved using the DeLorean from Back to the Future) ultiamtely giving so many alternative ways of play. Whether you want to take it to a downhill track with a lot of turns, whilst applying gear-shifting to the control scheme, or simply breeze around a simple circular track with the bare minimum of control, you can do it all. There is an infinite amount of replayability to the multiplayer given all the possible options available.

Another mode of the game that will impress car fans more than anyone is the AutoVista mode. A mode in which you can choose one of your vehicles and inspect every single inch of it, as well as get information regarding it’s history as well as specs. Once again you can use Kinect here, but it really isn’t necessary and does feel somewhat shallow. But all-in-all AutoVista is honestly a car lovers dream. The only thing I can say about it as a negative is that it would most likely bore those who do not care for the ins and outs of cars. But those who do, will eat this up.

Returning from Forza 3 is the Storefront and Auction House. As in Forza 3, they essentially serve the same purpose here. The Storefront is where you purchase items and upgrades for your cars and the Auction House is the place where you can, trade, buy and sell vehicles. It is all quite straight-forward. Both modes feel like a fine-tuned version of their Forza 3 counter-parts, which is all they really needed to be.

Overall, Forza Motorsport 4 features some of the most impressive gameplay the racing genre has ever seen. There is nothing that provides the same experience and level of unbridled joy that Forza Motorsport 4 does, and if you are going to purchase this for any reason I assure you it should be for the gameplay. 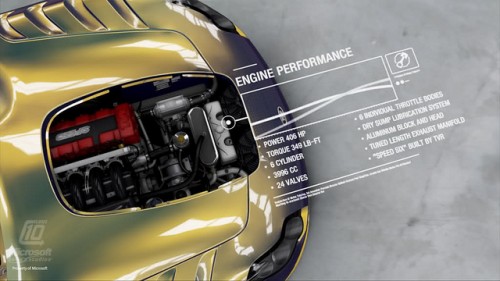 Visuals:
This is where the realism of Forza Motorsport 4 shines most brightly. There is no comparison to make with Forza 4 when it comes to realistic imagery. There is just no game that looks as good as Forza Motosport 4 on any platform. This is the closest I have seen in any game to photo-realistic visuals. Upon first playing the game I was awe-struck, I could not believe that such graphics were possible, I did not know that a game could look like this.

That is not all either, Forza 4 also features highly detailed vehicles that show signs of damage, even if it is as miniscule as a light chip on the paint. I was left in awe as the utter carnage you can inflict on your vehicle. The most impressive part of which is to see the detail of the damage on your car. It’s astonishing how much emphasis was put into making this as realistic as possible.

Beside’s their cars themselves, even the enviroments look so vibrant and full of life. From the way strands of grass flick into the air as you drive through it or the ripples left in sand. There is an almost unbelievable amount of precision and care put into the creation of Forza 4’s visuals that it would appear that they spent as much time on the graphics as they did on the gameplay. I’ll repeat my previous sentiments, there is just no comparison to Forza 4 visually, it is above and beyond anything else on the market. 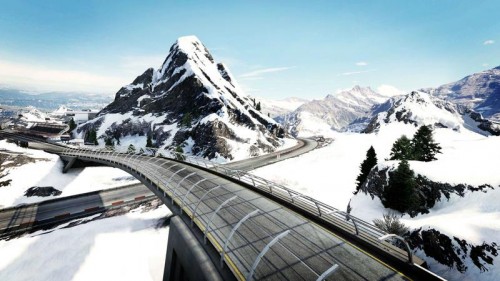 Audio:
Racing games are known for their elaborate soundtracks that can either make or break the game itself. If the soundtrack doesn’t fit the gameplay, then it can all fall to pieces. Forza Motorsport 4, thankfully has a mix of songs that are both exhillerating as well as slick. Whether you are in the mood for an intense race or a laid back cruise, the soundtrack has been carefully comprised of songs that fit the game in any way you choose to play it.

As for the game’s sound effects, they are equally as good. With sound’s that echo what you would hear at an actual race. Those with good ears would also be able to tell slight differences in sounds between different cars, which is a delightful little detail put in by Turn10 that will excite car lovers, that is for sure.

Those of you who played Forza 3 should remember the smooth-talking narrator, who guided you in the early portions of the game. Well, he returns here sounding just as smooth and just as slick. A common problem in a lot of games is irritating narration. That is far from the case with Forza Motorsport 4. The narration on display here feels completely natural and never grates. It’s the perfect fit. The audio on display in Forza 4, is a perfect companion to it’s visuals and gameplay in every single way. 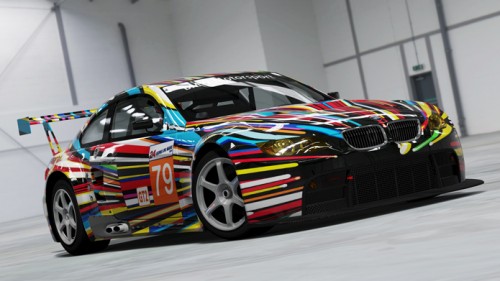 Overall:
Forza Motorsport 4, is the whole shebang. It is everything you could possibly ask for from a racing game, all put into one incredibly neatly wrapped package. There is nothing more you could ask for from this game. Turn10 Studios have effectively developed the benchmark for all racing titles.

Forza Motorsport 4 is streets ahead of all it’s competition by a considerable margin, so far in fact that if you are looking for a new racing game for this holiday season, this is it, there is no other racing game that would rival this. Do yourself a favour and drive home with Forza Motorsport 4. Believe me when I say this – You will not be driving angry.